Vodice is a small town situated on the Adriatic coast, between Sibenik and Zadar. As a famous Croatian tourist destination, Vodice offers a lot of attractions in terms of sights, events, beaches, cuisine and friendly people. If looking for a perfect summer resort on the Adriatic, away from the large tourist areas, then consider Vodice and start planning your trip with help from a guide below.

How to get to Vodice

Getting to Vodice can be done by car or bus from several directions. Here is the detailed guide for each means of transportation.

Vodice is connected to most other Croatian and other cities in the region and Europe. If travelling to Vodice by car, you can choose between the motorway and the coastal road. Using a motorway from any direction is faster but toll fees are applied, the exit for Vodice is “Pirovac” if arriving from the north and “Sibenik” when coming from the south.

The coastal road Jadranska magistrala passes through Vodice and other towns along the way, but have in mind that this route is much slower in season.

In case you don’t arrive in your own vehicle, you can always consider renting a car. You can do it at the airport, in the city or simply book your car online.

Vodice are often visited as a day trip from Sibenik, Zadar or Split. There are numerous daily bus departures from each city. You can check all the details of the popular routes, as well as purchase the ticket on the link below.

If arriving in Vodice by plane, the closest and most convenient airport is Zadar Airport. It is located a bit less than 1 hour from Vodice, but the only way to get there is to reach Sibenik main bus station using a shuttle bus and then change to the bus to Vodice. 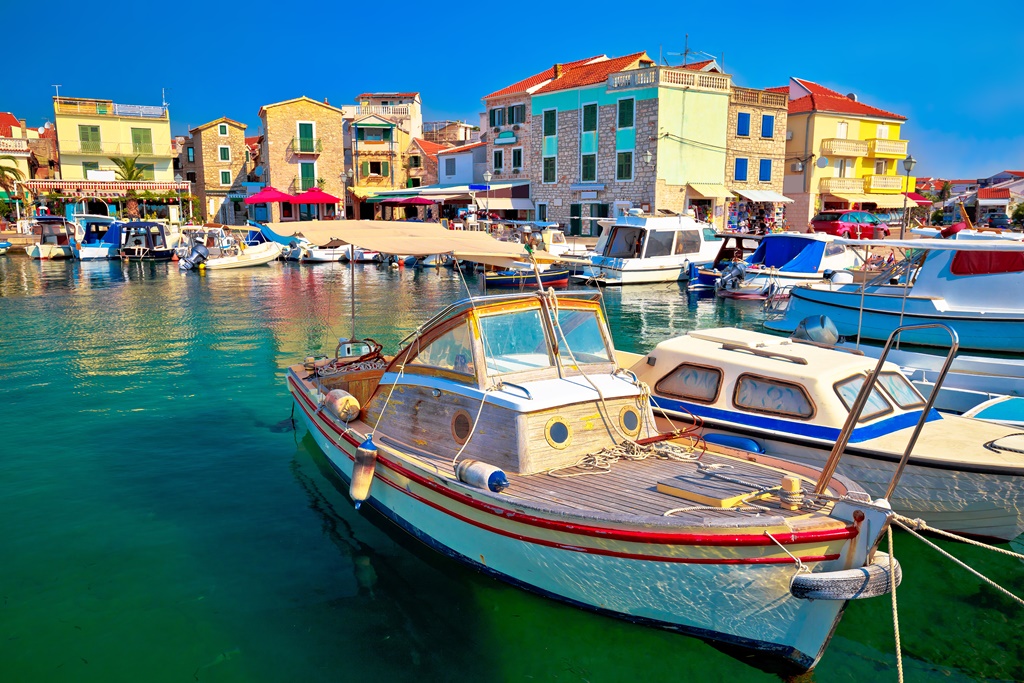 What to see and do in Vodice

Vodice was a town founded first in the Roman times and numerous archaeological excavations found remains of the ancient civilization. Therefore, Vodice treasure a long history and tradition which can be seen in plenty of sights. On the other hand, being a popular summer destination, the town has a lot to offer to its visitors. Here are some of the things to see and do while staying in Vodice.

The Parish Church of St. Cross

In the Old Town of Vodice lies a beautiful piece of architecture built by famous Ivan Skok, a master of Dalmatian Baroque. The church dates back to the early 18th century but was finished gradually throughout the years. The altarpieces were done by the painter Eugenio Moretti Varese and the bell-tower was built by Vicko Macanović Dubrovčanin. The church was consecrated in 1760.

The Church of St. Cross

This is a small Gothic church built at the beginning of the 15th century and it was dedicated to the Saint Cross. The church is known for one unique detail, an old Romanesque-Gothic holy-water bowl attached to one of the columns, the only such font in this part of Dalmatia. This charming church also has a graveyard and hosts various art exhibitions during the season.

Okit Hill with its Church of Our Lady of Carmel overlooks Vodice being the dominant sight in the town’s panorama. The church was built in the 17th century and later the Way of the Cross was made with 14 small chapels leading to the church on top. The church was destroyed in wars and rebuilt several times. 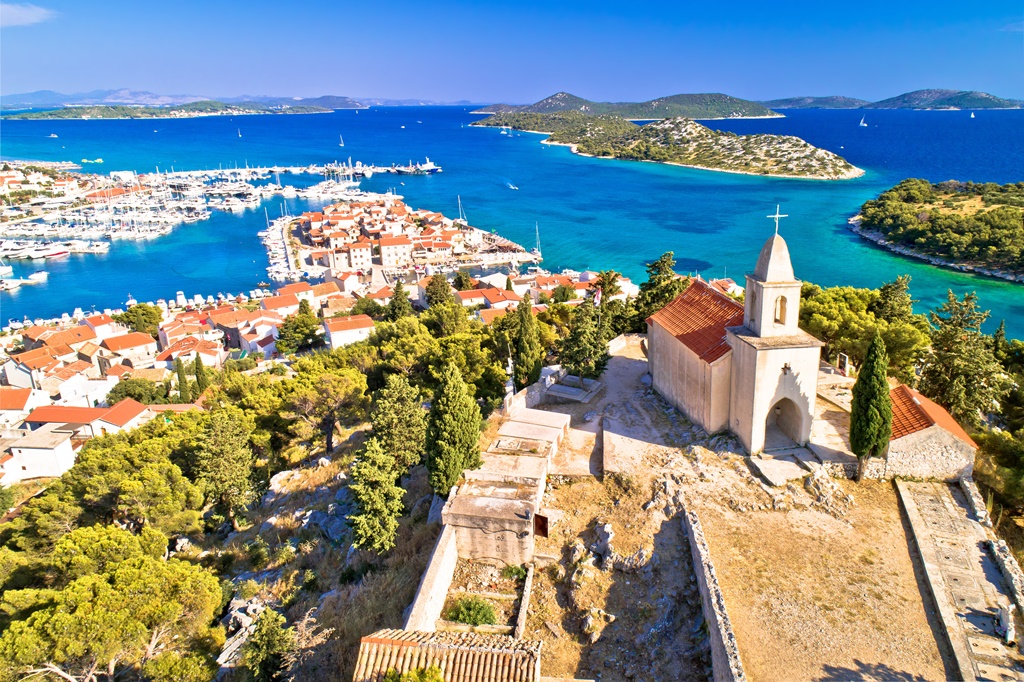 Coric tower is a fortified tower dating back to the 16th century. The tower was firstly owned by the Fondra noble family. The tower was built of the stone from Brac island and today its courtyard is used for various events such as open-air cinema.

As the name of the town literally means “little waters”, it indicates that it was built next to the water springs. Therefore, there were two wells around which the whole settlement was built. Visitors can find them on the square, under the parish church.

To experience the authentic atmosphere of Vodice, one must visit its market. You can find basically anything on these stands full of fresh fruits, vegetables, meat and other homemade products. If looking for a souvenir, you will likely find the best one here.

Vodice can really brag about its beaches as they truly are one of the best ones in this part of the Adriatic coast. Here are just a few of them where you can consider swimming and sunbathing the whole day.

Blue Beach (Plava Plaža) – This beach is definitely among the most popular ones. It is partly concrete and mostly pebbled/sandy. The beach is well-equipped and awarded a Blue Flag. You can enjoy various facilities such as cafes, restaurants, shops, children playground, street workout, climbing wall, volleyball court and more. There is also a parking nearby which makes it easily accessible.

Hangar Beach – The beach is located next to the Olympia Hotel complex, so you can expect a lot of facilities around. The beach is made of shingle and besides the basic equipment such as showers and changing booths, you can also enjoy the water park, trampoline, water slides and all kinds of watersports.

Srima Beach – The beach is made of shingle and is awarded a Blue Flag. There are various facilities around such as a cafe, water park, playground, basketball court and more. The beach has a parking lot, as well.

Hotel Imperial Beach – The beach is mostly made of shingle with concrete parts. There is a cafe and a beach bar nearby and a pine forest that provides some shade. The beach is equipped with basic facilities such as showers, changing booths, beach chairs and umbrellas for renting. 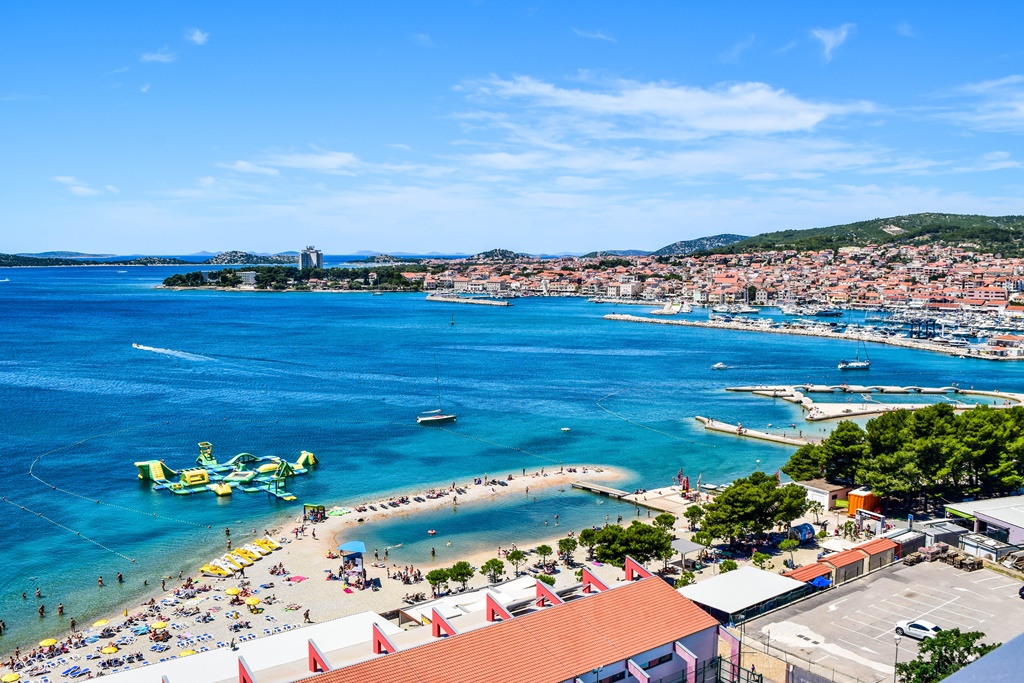 Vodice is a very live and vibrant town during its summer season. Having a fun night out or attending an interesting event in the town is guaranteed.

One of the most popular events among the locals is the CMC Festival organized by CMC Television. The festival features the performances of local pop musicians and their newest songs.

Vodice Street Festival is a cheerful and colourful festival held every July. During several days of the event, visitors can enjoy many workshops, performances, exhibitions and concerts.

Those who enjoy theatre performances can attend Croatian Amateur Theatre Festival with a  free entrance to all performances.

Carmelfest is also held every year and it is a festival of spiritual Christian music.

Besides these events, there are numerous more concerts, folk traditions and sports events held every year in Vodice, so the fun is guaranteed.

If staying in Vodice for a longer period, there are numerous charming places and islands nearby that can be a perfect day trip from Vodice. Here are several suggestions.

One of the most visited places in Croatia is just about 30 minutes away. Krka Waterfalls National Park is definitely worth visiting if staying in this area, especially Skradinski Buk. If you have enough time, stroll around the charming Skradin town. 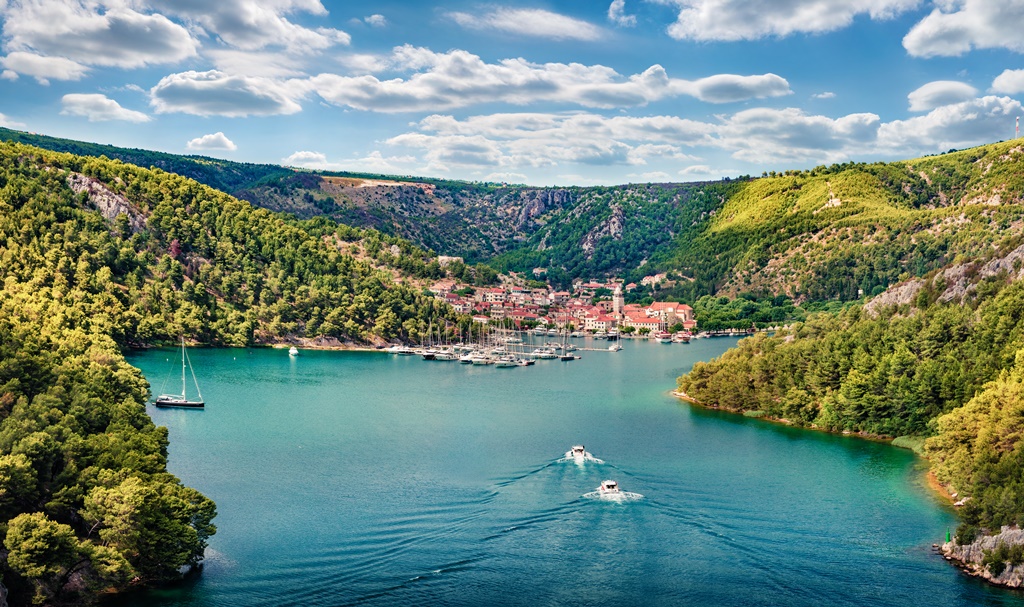 Another national park is Kornati Archipelago which you can visit via organized excursions.

Islands such as Prvic and Zlarin are connected by daily ferry departures from Vodice, so including to your schedule a day trip to one of the islands across the town is definitely a good idea! 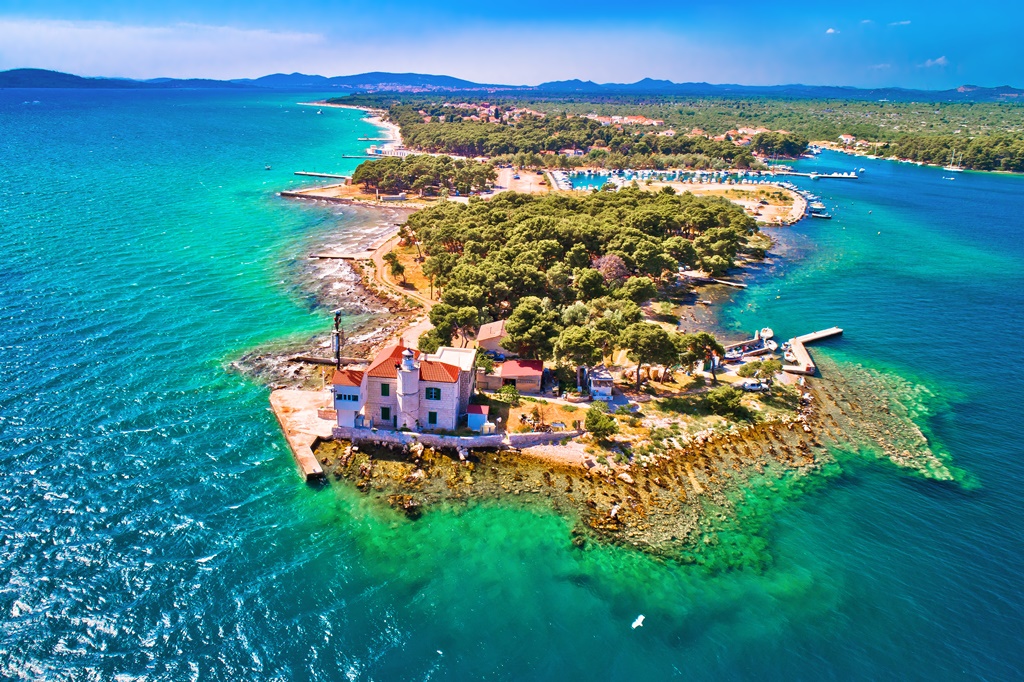 Visiting Sibenik implies naturally as the city is located only 20 minutes away by car or bus.

This part of the Adriatic coast is full of small towns and charming places to see while staying in this area. Depending on your time and schedule try to include a few more locations such as Tribunj, Zaton, Pirovac, Tisno and Murter.

As a coastal town, Vodice offers a bunch of water sports and activities such as diving, surfing or kayaking. Fishing is another attractive activity which can be joined through the Big Game Fishing tour.

The inland offers other interesting activities. One of the best ways to explore Vodice and the surrounding places is by cycling.

Climbing is possible for all adrenaline lovers, as well as hiking, sailing and parasailing.

Where to eat in Vodice

In Vodice, you can expect Dalmatian and Mediterranean dishes. They mainly include a lot of fresh fish, seafood and meat delicacies with olive oil and Mediterranean herbs, as well as Italian dishes such as pasta, gnocchi and pizza.

While staying in Vodice, try out specialties such as lamb on a spit, fish stew, octopus under the baking lid, octopus salad, shells etc.

There are plenty of restaurants in Vodice and most of them serve fresh products only. Some of our suggestions are Konoba Rustika, Konoba Tri Piruna, Karmelski Dvori – Konoba Okit, Bistro Guloz, Konoba Roki, Arausa and Konoba Guste.

Finding accommodation in Vodice shouldn’t be a problem since the area has plenty of B&B options and hotels. The only advice is to book your accommodation in advance since Vodice is a popular summer destination when most tourists come to visit. Check out the options below.