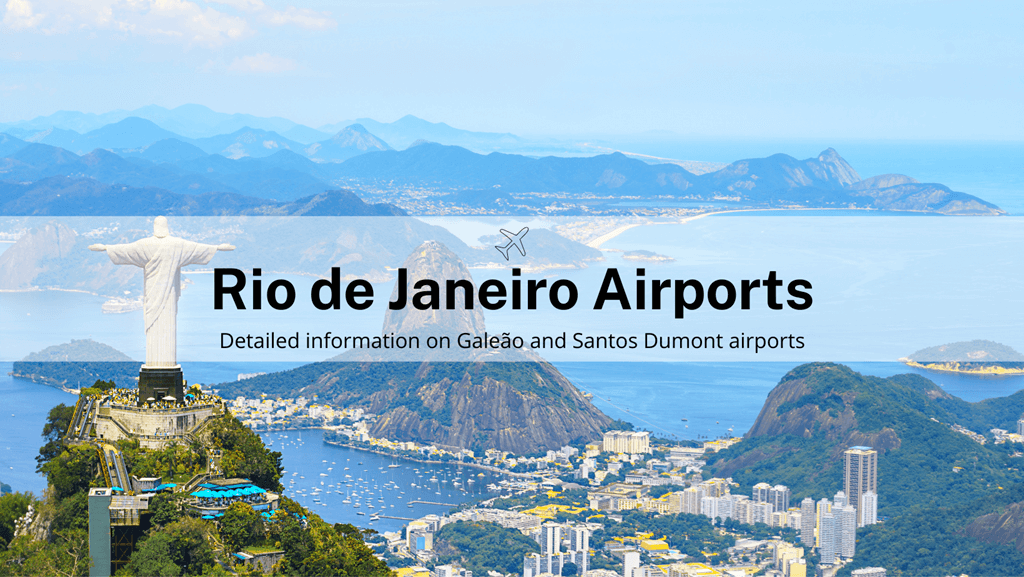 Together they handle more than 22 million passengers every year.

GIG airport is the main and largest airport in Rio de Janeiro. It’s served by both local and international airlines, some of which are: Aerolíneas Argentinas, Air France, American Airlines, Azul, British Airways, Lufthansa, United Airlines etc.
Most of the passengers come from Argentina, United States, France, Chile and the UK.

Read on and check out everything you need to know about Rio airports.

Rio de Janeiro International Airport – Galeão (GIG) is the largest airport in Rio de Janeiro which serves over 16 million passengers every year. It handles both international and domestic flights. Some of the airlines that operate here are Lufthansa, American Airlines, AirFrance etc.

The airport is located 20 kilometers from the center of Rio de Janeiro. It’s well connected – there are buses, taxis and other transportation services available, especially if you want to go from the airport to the city centre (Centro).

Santos Dumont Airport (SDU) is the second airport serving Rio, but smaller in comparison to GIG. It has 2 terminals (Terminal 1 doesn’t handle any flights) and it serves about 9 million passengers every year.

With just 2 kilometers away from the centre, it’s the closest airport to Centro. Also, SDU handles mostly domestic flights.

Both airports are close to the Centro, but the closest one is Dumont Airport. There’s a variety of transportation options for you to choose from.

Check out the table below for more information about transportation at these airports.

Which Rio de Janeiro airport is the best?

Well, it depends on your requirements and where your accommodation is located. Find out more below.

For most people it’s important to get to the Centro because that’s where the most popular sightseeing attractions are located (e.g. Christ the Redeemer). If you’re one of those, then Santos Dumont is a great option – it takes just ten minutes to get to the center, and there are lots of transportation options.

When travelling to Rio de Janeiro on a budget

If you don’t want to break the bank on your stay in Brasil, Santos Dumont is great because it mostly offers budget flights to other parts of the country and some international locations.

Some of the most popular flights are to São Paulo-Guarulhos, São Paulo-Congonhas and Brasília.

You can get from one airport to another with various means of transport.
The quickest way from Rio De Janeiro Santos Dumont Airport (SDU) to Rio De Janeiro-Galeão Airport (GIG) is by car or shuttle – it takes about 15 minutes.

If you’re looking for cheaper transportation, take the bus (Line 2101). Line 2101 departs every 20 minutes from Avenida Franklin Roosevelt próximo ao 126 and arrives at Avenida Vinte De Janeiro próximo ao 290. It takes about an hour to get to GIG.

Travelling from Rio de Janeiro airports to other cities

Here are some of the most popular routes.

Are there hotels near Rio de Janeiro airports?

Yes, there’s a hotel located at the Rio De Janeiro-Galeão Airport – Rio Aeroporto hotel. It’s located on the third floor of Terminal 1 and has a restaurant, sauna, gym, and free WiFi.  Just 500 m from the Galeão airport there’s also the three-star Linx Hotel.

Is there free WiFi at Rio de Janeiro airports?

Yes, there is free WiFi service available at both airports.

Are there money exchange and luggage storage services at Rio de Janeiro airports?

How early to arrive when departing from Rio de Janeiro airports?

How to get from one Rio de Janeiro airport to another?

There are different transportation options for getting from one airport to another. You can either book a taxi or transfer, or go by bus.