Florida is one of the US states with the most amount of international airports. Florida airports consist of 20 large, medium, small and nonhub airports offering year round flights. Miami and Orlando airports are the ones handling the biggest percentage of traffic. However, Fort Lauderdale is another popular option, especially due to its location. All these bigger Florida airports can handle heavy-sized planes, and there are also low-cost airlines operating at them. Since there’s plenty of airports in Florida, we’ve included a map so you can better understand where each airport is located.

Orlando International Airport is located about 10 km from downtown Orlando. MCO airport is the busiest Florida airport, serving several domestic and international lines. Southwest Airlines, Delta and American are its main carriers. As for the top routes – Atlanta and Newark are the most common ones. Orlando Airport is the common choice for travelers visiting not just Orlando and Disneyland, but other nearby resorts. Most of them are located in Palm Bay County. To visit these locations, the airport offers local buses, out-of-town shuttles and more.

Miami International Airport is the main airport serving the city of Miami. It is the largest airport in the Miami area and one of the busiest US airports. Airport is also known as Wilcox Field. Airport is one of the largest American Airlines hubs, and it serves as a common choice when traveling to Latin America. As for the MIA airport location, the distance to the city is about 13 km. To get to Downtown Miami, you can use public transportation – Miami Mover, MetroRail, Miami Beach buses, Tri-Rail train and Metrobuses.

Fort Lauderdale–Hollywood International Airport is another major US airport, servings the cities of Miami, Fort Lauderdale and Pompano Beach. Airport is located between Miami and Fort Lauderdale, more specifically 5 km south of FL and 33 km north of Miami Downtown. Airport is really popular among low-cost carriers. Moreover it is the main base for Spirit Airlines, and offers many flights by Allegiant Air, jetBlue and Norwegian Air Shuttle. As for the cities, Atlanta and NYC are the most connected domestic, and Nassau and Toronto international destinations. Getting to and from the airport is possible by Broward County Transit, or with transfers, shuttles and taxis.

Tampa International Airport is an airport in eastern Florida, located about 10 km NW of Tampa city center. Airport is a hub for a regional airline Silver Airways, but also services flights by major airlines like Southwest Airlines, Delta and United. Most of the flights are domestic, but there’s also a significant number of international flights, to locations like Toronto and London. The airport has been ranked as the 32nd best airport in the world, according to travellers. HART and PSTA public transport gets you to Tampa city fast. Other options include taxis and car rentals. Also, cities of St. Petersburg and Clearwater are fairly close to the airport.

Fort Myers Southwest Florida International Airport, as its name suggests, is an airport located in SW Florida. Distance about 25 km south of Fort Myers, it also serves surrounding cities like Cape Coral and Naples. Traffic at the airport keeps increasing each year, mostly due to flights by Delta and Southwest Airlines. Getting to Fort Myers is simple, as you can choose between public transportation (LeeTran), shuttle services, taxis and car rentals.

Jacksonville Airport is a medium-size US airport serving mostly domestic routes. Airport is located in the northwestern part of Florida, about 20 km north of Downtown Jacksonville. Atlanta city is by far the busiest connection with JAX airport. As for the airlines, Delta and Southwest have the biggest traffic numbers. Airport set a record for most passengers in its history last year. To get to the city, passengers can choose JTA public transport, as well as shuttles, taxis and rent-a-car services.

Palm Beach Airport is the third airport serving the greater Miami area. Airport is located about 5 km from West Palm Beach, 40 km from Boca and about 115 km from Miami. Due to its location, its popular gateway for anyone traveling to Palm Beach County. Airport has 2 terminals, servicing mostly domestic flights. Atlanta and New Jersey are top destinations, while jetBlue and Delta handle most passengers. As for the ground transportation, it is located at Level One of the airport. Palm-Tran, Tri-Rail and Amtrak offer their services, and other standard options like taxis and limos are on site.

Orlando Sanford International Airport is a second airport serving the Orlando area, but notably further away from the city and surrounding sights. Moreover, the distance to the city is about 40 kilometers. Airport has 2 terminals, servicing mostly Allegiant Air passengers. Taxis, shuttles and shared rides are available from and to the airport. 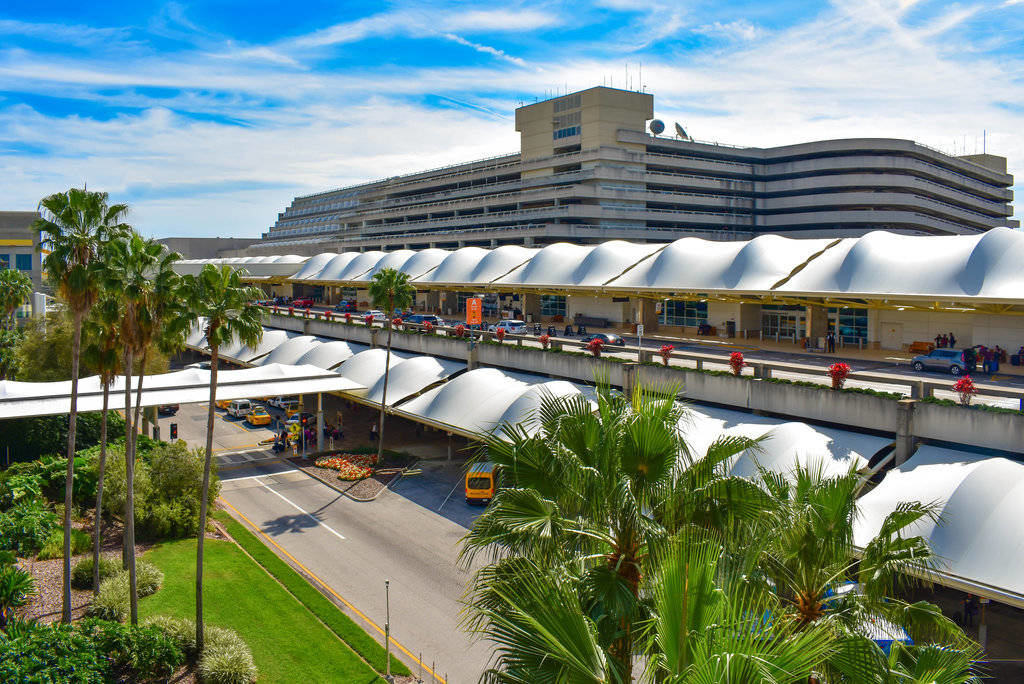 An outside look of Orlando International Airport in Florida