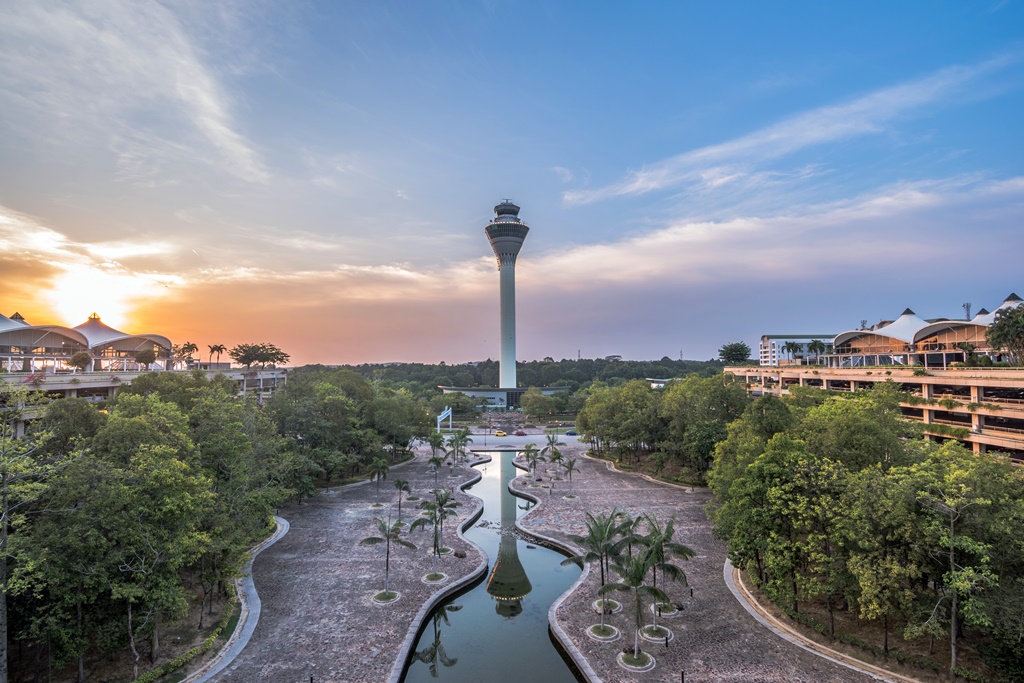 Malaysia is a country in Southeast Asia and it consists of thirteen states and three federal territories. Its capital, Kuala Lumpur, has one of the busiest airports in Asia, handling more than 62 million passengers per year. Although being a relatively small country in size, its popularity grows rapidly. Lying just north of the Equator, Malaysia has a tropical climate which means that it is never too hot and temperatures range from a mild 20°C to 30°C average throughout the year.

If travelling to Malaysia, it is good to know which airport is the most suitable for you to land in. That is why we present you the most important Malaysian airports to help you organise your trip. All the airports are listed down in the guide, from the largest to those handling less than 100 000 passengers annually.

At the end of the post you can check the map with all airports mentioned in the text and their GPS locations.

Kuala Lumpur Airport is the main international airport in Malaysia and also one of the largest airports in Southeast Asia. It is located approximately 45 kilometres from Kuala Lumpur city centre and it handles more than dazzling 62 million passengers annually. The airport is the main hub for many airlines, including Malaysia Airlines, MASkargo, AirAsia, AirAsia X and others. The busiest air routes are those to major Asian airports, such as Hong Kong, Taipei-Taoyuan and Seoul-Incheon. When it comes to transportation between the terminals, Kuala Lumpur uses the so-called Aerotrain. It connects KLIA Main Terminal Building and the Satellite Building which makes transportation of the passengers easier. Kuala Lumpur Airport is connected to the cities by Express Rail Link and the airport has two ERL stations. Passengers also have airport shuttle service and local bus lines at their disposal. Travel time to Kuala Lumpur downtown with express train is around 30 minutes and with bus is around an hour.

The second busiest airport in Malaysia is situated in the capital of Sabah, state in the northern part of Borneo Island. It is located approximately 8 kilometers from Kota Kinabalu city centre so it is quite easy to reach the city. The airport is hub for four airlines: AirAsia, Malaysia Airlines, Malindo Air and MASWings. Besides operating domestic flights, Kota Kinabalu has regular flights to Seoul, Singapore, Guangzhou and Bandar Seri Begawan (Brunei). Passengers can get to the city either by airport bus or minibus and travel time is between 30 and 40 minutes, depending on the traffic.

Penang Airport, previously known as the Bayan Lepas International Airport, is the oldest airport in Malaysia. It was opened in 1935 and since then it has been operating flights to some of the major cities in Asia, such as Bangkok, Hong Kong, Singapore and Taipei. The airport is also a hub for major Asian airlines such as AirAsia, Firefly and Malaysia Airlines. It serves the Greater Penang Conurbation and it is a great option if you plan to visit Malaysian states like Penang, Kedah and Perak. There are currently five different bus routes operating to and from Penang Airport which connect the airport with the rest of the island.

Kuching Airport serves the southwestern region of Sarawak in Malaysia, located approximately 11 kilometers from Kuching centre. With almost 6 million passengers and more than 50 000 flights per year, Kuching Airport is the 4th busiest airport in the country. It is a hub for three major airlines of the region, AirAsia, Malaysia Airlines and MASwings. Although the airport mostly operates domestic flights, some of the busiest international air routes include Singapore, Indonesia and Brunei. At the moment, there is no organised public transportation to and from the airport, but the nearest bus station, Kuching Sentral Bus Terminal, is located 2 kilometers away.

Also known as Sultan Ismail International Airport, Senai Airport serves the city of Johor Bahru and southern part of Peninsular Malaysia. It is a hub  for airlines such as AirAsia, Firefly and Malindo Air. Besides operating domestic flights, Senai Airport also has many international routes. The busiest international routes include Bangkok–Don Mueang, Seoul, Guangzhou, Ho Chi Minh and Surabaya. The airport has a good connection to the city centre via the airport bus shuttle (Causeway Link) operating to JB Sentral Railway Station. The usual travel time is around 40 minutes.

Langkawi Airport serves the Langkawi district and also Perlis Indera Kayangan, the smallest state in Malaysia. Even though it handles a little less than 3 million passengers per year, the airport can easily accommodate 4 million passengers annually. It mostly operates flights to and from Kuala Lumpur’s airport, but it also has several international routes, such as Guangzhou, Doha and Singapore. Langkawi Airport doesn’t have any organised public transportation to the city so you will have to consider getting a taxi.

Miri Airport is the second busiest airport in the Malaysian state of Sarawak, right after Kuching Airport. The position of the airport is close to the border of Brunei which makes it an important gateway to Sarawak. It is a major hub for airlines like MASwings and Awan Inspirasi. The airport mostly operates domestic flights and has only one international route – the one to Singapore. If you need transportation to the city of Miri, there are available taxis waiting outside the terminal.

Also known as Kuala Lumpur-Subang Airport, this airport was once Kuala Lumpur’s main airport, more precisely until 1998. It is located in Subang, approximately 23 kilometres from  the centre of Kuala Lumpur. Subang Airport is currently a hub for Malindo Air and Firefly airlines and it has two terminals (Terminal 2 and Terminal 3). Terminal 3 took over the functions of Terminal 1 which was demolished in 2001. When it comes to ground transportation, Subang Airport is well equipped. Rapid KL bus line 772 runs to Pasar Seni in Kuala Lumpur, line T773 to Ara Damansara LRT Station and line T804 to Kwasa Sentral station. Passengers also have shuttle service between Subang Airport and Kuala Lumpur International Airport at their disposal.

The second busiest airport in Sabah state (the other being Kota Kinabalu) is Tawau Airport. It serves the districts of Tawau, Kunak and Semporna so it is an ideal airport to fly in if you are visiting these parts of Malaysia. The airport is hub for AirAsia and Malaysian Airlines with flights mostly operating to Kuala Lumpur and Kota Kinabalu. Tawau also has two international air routes, Bandar Seri Begawan (Brunei) and Tarakan (Indonesia). The airport is located around 30 kilometres from Tawau centre. Passengers can easily reach the city by local bus, timed to meet AirAsia flights. The approximate travel time is 20 minutes.

Sultan Ismail Petra Airport serves the wider area of Kota Bharu, a city in the state of Kelantan in Malaysia. The airport currently has 9 check-in counters and operates 7 domestic flights with Malaysia Airlines, AirAsia, Firefly, and Malindo Air. The only international flight the airport currently operates is to and from Singapore. The airport is connected to Kota Bharu Bus Station by local line 9 which stops in front of the airport terminal. The usual travel time is around 25 minutes.

Sibu Airport is an airport situated approximately 23 kilometres from southeast of Sibu, Sarawak. The airport is the third busiest airport in the state of Sarawak in terms of the passenger number. It is a hub for AirAsia and Malaysia Airlines and it currently operates only domestic flights. There are no organised airport shuttle buses from Sibu Airport, so the passengers will have to get a taxi.

Bintulu Airport serves the Bintulu town in the state of Sarawak and it is located only 5 kilometers from the town center. It operates mostly domestic flights and it is a hub for AirAsia and Malaysia Airlines. However, it has one international route to Bandar Seri Begawan, Brunei. Although there are no public buses operating between the airport and the city, the passengers can easily get a taxi at a reasonable rate.

Sandakan Airport is a domestic airport situated in the eastern part of the Malaysianstate of Sabah. Most of the flights operate to Kuala Lumpur and Kota Kinabalu which enables an easier connection with the larger cities in the country. Besides this, Sandakan Airport also has one international route to Bandar Seri Begawan, Brunei. Although there was a bus operating between the city center and the airport, it has been cancelled and passengers currently have only taxis at their disposal. 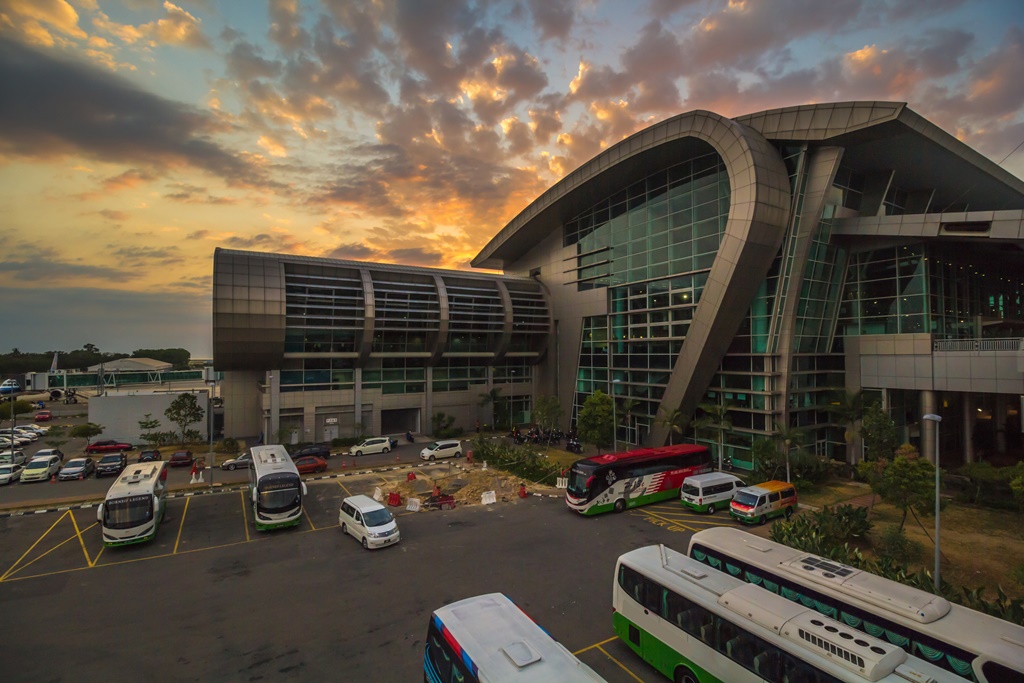