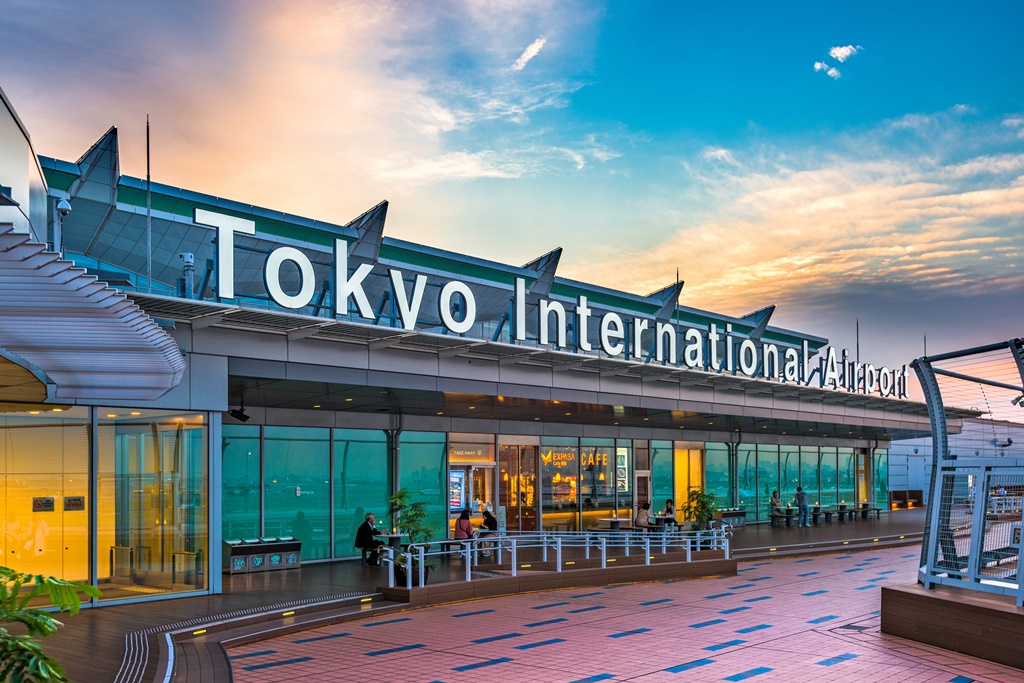 Known as the Land of the Rising Sun,  Japan is a popular tourist destination thanks to its rich history and unique culture. The ancient Japanese culture has been known to the human race for thousands of years and people can learn a lot about it by visiting castles and shrines. If flying to Japan, it is good to know that there are currently in total 98 Japanese airports, 28 of them operated by the central government and 67 by local governments. The airports in Japan are divided in classes – First Class, Second Class and Third Class. Those which are under the First Class have the largest role in domestic and international transportation. No surprise, several Japanese airports have ranked on top of our list of world’s best airports, according to travellers.

The busiest of all Japanese airports is Tokyo-Haneda Airport, followed by Tokyo-Narita Airport, Osaka-Kansai Airport and Fukuoka Airport.

Haneda Airport is busiest international Japanese airport, handling a staggering number of over 87 million passengers annually. Also known as Tokyo International Airport, Haneda is also the fourth busiest airport in the world. It serves the Greater Tokyo Area and it is the main hub for two domestic airlines, Japan Airlines and All Nippon Airways, among others. Situated about 30 kilometers from Tokyo city center, this airport offers several ways of getting to the city, including train, bus and private transfer. Approximate travel time by bus from Haneda Airport to Tokyo is around 45 minutes. Haneda Airport is also very well connected to Narita Airport by shuttle buses.

Originally known as New Tokyo International Airport, Narita Airport is Tokyo’s second busiest international airport. Although handling twice as less passengers in comparison with Haneda, Narita Airport handles around 50% of Japan’s international flights. Moreover, the airport has the longest runway in Japan, almost 4 kilometers long. Narita Airport serves as a hub for Japan Airlines and All Nippon Airways as well as a hub for low-cost carriers such as Jetstar Japan and Peach. Passengers can reach downtown Tokyo by bus in 55 minutes and the buses arrive at  Tokyo City Air Terminal.

Kansai Airport is an international Japanese airport located in the middle of Osaka Bay, on an artificially made island. The airport serves Osaka Prefecture and it was opened in 1994 to relieve Itami Airport which now handles only domestic flights. Kansai Airport is one of the main hubs for All Nippon Airways, Japan Airlines and Peach. The airport has two terminals and it is connected to Osaka by rail and bus. Airport shuttle buses are called airport limousines and they run to some of the larger hotels in Osaka, as well as to Shin-Osaka Station and Shin-Umeda City.

Fukuoka Airport is the fourth busiest among the airports in Japan, located on Kyushu Island. Being the main airport on the island, Fukuoka handles more than 24 million passengers per year. Since the airport is surrounded by residential areas, flights are obliged to stop after 10 PM and can continue to operate after 7 AM. There are two terminals, one domestic and one international. Airport is connected with Fukuoka city by subway, however, only from the domestic terminal. The passengers flying into the international terminal will need to take a shuttle bus which operates between the two terminals.

Also known as Sapporo Airport, New Chitose Airport is an international airport serving the Sapporo metropolitan area. The airport is situated 5 kilometers southeast of the city of Chitose and it is also the largest airport on Hokkaido Island. About a third of the passengers in New Chitose Airport travels to Tokyo Haneda Airport which also makes it the third busiest air route in the world. The airport is connected to Chitose by shuttle bus and there is also a subway which connects the airport with Minami Chitose Station. Once arrived at Minami Chitose, passengers can transfer to train lines to Tomakomai, Hakodate, Obihiro and Kushiro.

Situated only 4 kilometers west of Naha City, Naha Airport handles flights for the passengers travelling to and from Okinawa Prefecture. Most of the flights include air routes to Taiwan, Hong Kong and South Korea. Naha Airport is the main hub for airlines such as Japan Transocean Air, Ryukyu Air Commuter and Peach, one of the popular low-cost airlines. Passengers can easily reach the Naha city centre, either by shuttle bus or single monorail line which operates to Shuri Station. The usual travel time is around 30 minutes.

Also known as Itami Airport, Osaka Airport is the first airport built to serve Osaka Prefecture until Kansai Airport was built. It is situated in Itami in Hyogo Prefecture, 15 km north of Osaka city center. Usual travel time to Osaka is around 30 minutes by airport bus limousine. Some of the airlines operating at the airport include Ibex Airlines and ANA Wings (owned by All Nippon) and national Japan Airlines.

Familiar to the international passengers as Central Japan International Airport (or Nagoya Airport), Chubu Centrair Airport is situated on an artificial island in Ise Bay, Tokoname City. The airport is located 35 kilometers south of Nagoya and ranks as the 8th among busiest Japanese airports. It is a hub for three major airlines in eastern Asia, All Nippon Airways, AirAsia Japan and Jetstar Japan. Passengers can easily get from Chubu Centrair Airport to Nagoya by airport bus limousine. The bus operates to Meitetsu Bus Center which is located near Nagoya Station. The usual travel time is around 90 minutes.

Kagoshima Airport is a regional Japanese airport located in Kirishima, 29 kilometers northeast of Kagoshima-Chuo Station. The airport mostly handles domestic flights to and from Tokyo-Haneda, Osaka-Itami and Nagoya-Centrair. Some of the international flights include flights to Seoul, Shanghai and Hong Kong. The shuttle bus from Kagoshima Airport departs every ten minutes to Kagoshima-Chuo Station and the usual travel time is around 30 minutes.

Also known as Sendai International Airport, this airport serves the Sendai metropolitan area. It is situated in Natori, approximately 13 kilometers southeast of Sendai city center. The airport is a hub for Peach Aviation, one of the main low-cost carriers in Japan. Some of the popular air routes include flights to and from Seoul–Incheon, Taipei–Taoyuan ,Beijing–Capital, Shanghai–Pudong. The airport can be accessed by airport buses and taxis. The airport buses operate to Miyagi Kotsu, Iwanuma Shimin and Sendai. The journey to Sendai downtown takes around 20-25 minutes.

Miyazaki Airport is an international airport serving the Miyazaki Prefecture on the island of Kyushu. The airport annually handles around 3.1 million passengers, operating air routes to Nagoya, Tokyo, Osaka, Fukuoka, Seoul and Taipei. The airport is connected to Miyazaki by shuttle bus and a railway line which runs to and from the central station in Miyazaki. The airport is located 3.2 kilometers from Miyazaki center so the usual travel time is around 30 minutes.

Nagasaki Airport is an international airport located in the city of Omura, 18 kilometers northeast of Nagasaki. The airport serves Nagasaki Prefecture and handles mostly domestic flights to Nagoya, Tokyo and Osaka but there’s also one air route to Shanghai in China. Passengers can easily reach Nagasaki center by airport bus limousine. The journey approximately lasts about 45 minutes.

Matsuyama Airport is primarily a domestic airport which connects Ehime Prefecture on Shikoku Island with the rest of the country. About ⅔ of passengers travel to and from Tokyo, Nagoya, Fukuoka and Osaka while the rest travel to Taipei, Shanghai and Seoul. Passengers can reach the city by airport limousine bus which operates to JR Matsuyama Station and Dogo Onsen (a hot spring in the city of Matsuyama). 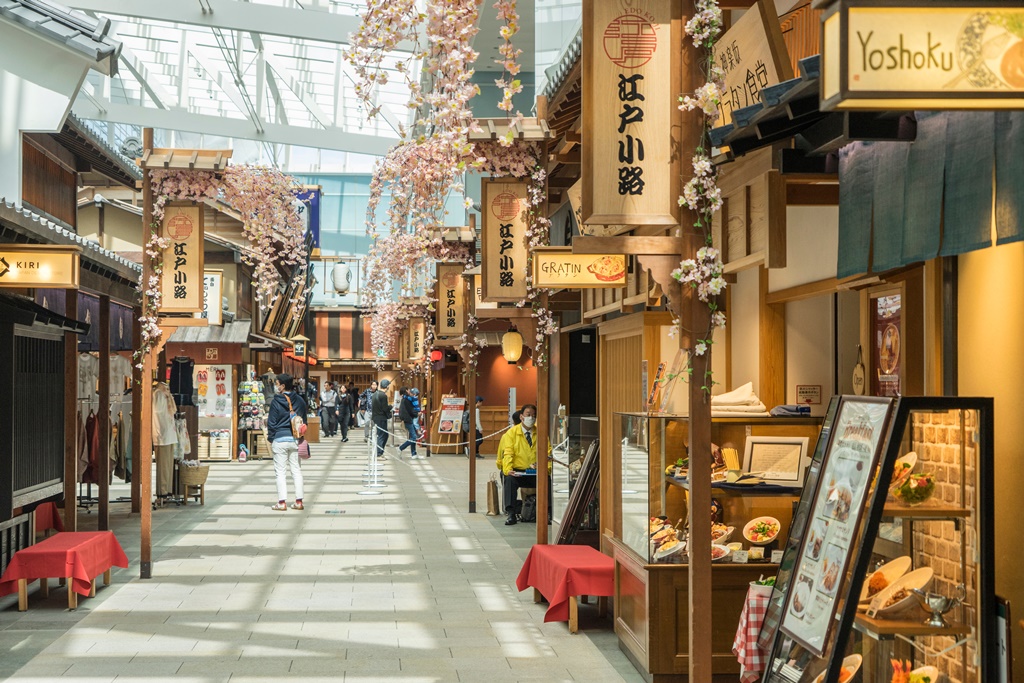