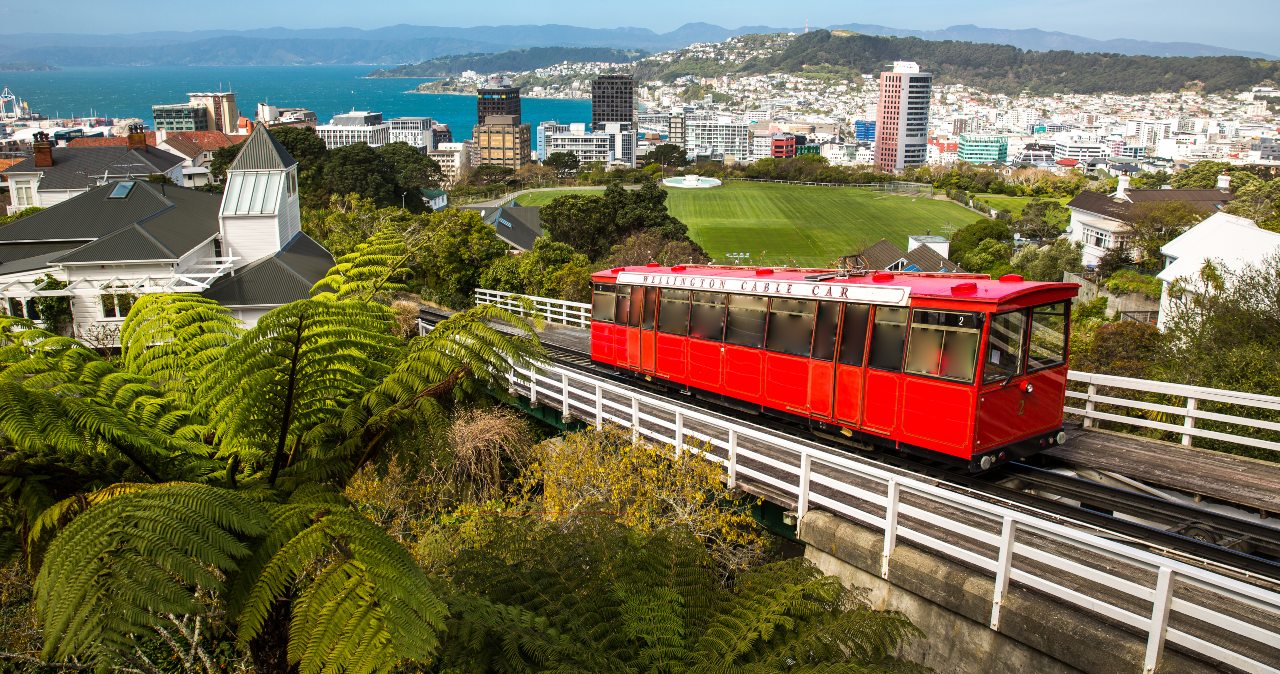 Traveling by bus is the most common and probably the best way of transportation in New Zealand. Once you fly into one of New Zealand airports, you will most likely take a bus to get to your desired destination. The country does not really have a developed train network. On the North Island you can get from Auckland to Wellington, and on the South Island only from Picton to Greymouth. Therefore, it’s much easier and quicker to take a bus. Moreover, bus travel in New Zealand is relatively affordable, and definitely cheaper than flying. Bus network is pretty refined, with regular daily departures from all larger cities. Apart from public transport buses, travelers often use bus tours or Hop-On Hop-Off buses to explore the country. It is estimated that the bus and coach industry in New Zealand transports about 1.5 million tourists each year.

The New Zealand intercity bus network is well-developed, so getting from one part of the country to another shouldn’t be a problem. In most cases, travelers will end up using services of a single company, Intercity. Intercity is currently the only national-owned coach company offering long-distance buses to all the major New Zealand cities.

Note that New Zealand is divided into two islands, which means that traveling on intercity routes between the islands will include an Interisland ferry ride. Nevertheless, buying a bus ticket via Intercity also includes the ferry service from Wellington to Picton.

As mentioned before, the train network in NZ is not really developed, even though you can use it to travel between some cities. However, these routes are mostly scenic, and take much longer than when taking an intercity bus.

It is highly recommended to buy intercity bus tickets in advance, as that way you can save a significant amount of money. All the tickets can be purchased both at major bus stations and online, which is a preferred way to do it, especially since the COVID-19 pandemic started. Single and return tickets are generally affordable. In addition, travelers can also opt-out to buy coach passes for Intercity routes, as well for bus tours and Hop-on Hop-off buses.

The company offers two types of passes: FlexiPass and TravelPass. The first one is an hour-based pass, which works like a credit card. Basically you put money on the pass, and then use the credit to travel on the Intercity bus routes across the country. With TravelPass, there is a pre-planned itinerary for the most popular New Zealand routes. Even though there is some flexibility with it, for independent travellers buying a FlexiPass is probably a better option. Both passes are valid for up to 12 months after purchasing, so there is plenty of time to change the travel plans.

Being an island-country, New Zealand only has domestic bus routes. They can be divided into intercity routes which connect main cities and are served by Intercity; and regional routes which connect larger cities with its nearby small towns and settlements. Regional routes are operated by shuttle companies, and most NZ regions have a few of them at travelers’ disposal.

When flying to New Zealand, there is a high probability that you will land at one of these 4 airports; Auckland, Christchurch, Wellington or Queenstown airport. All of them have public transportation (buses) which are connected to the city, e.g. bus from Auckland airport to the city. Of course, there are also several airport shuttle companies which offer their services. Other, smaller airports also have airport shuttles which drive to the nearby cities. Below we have listed the most important New Zealand airports. To read more about each airport and how to get around, click on the airport name below.

The NZ Transport Agency is in charge of setting bus transportation policies and rules, which are then delivered to regional (and state) bus companies. The agency does not provide the transportation, but serves as a “guide” for companies offering those services. Intercity is the largest and main bus company in New Zealand, under which several other brands operate, such as Gray Line or Skip Bus. Smaller bus companies are usually focused on bus tours and airport shuttles, leaving Intercity to handle the majority of interurban lines. The only other competitor for intercity lines was Nakedbus, which shut down operations in 2018. Below are listed some of the most popular New Zealand bus companies.

Larger cities in New Zealand have designated bus stations where travelers can see the schedule, and of course board the buses. Many of the smaller towns don’t have a bus station, but rather a bus stop indicating where passengers can get on board. In some cities, like Taumarunaui and Wairoa, the bus stop is located next to the i-SITE information center, so keep that in mind. Below we have listed some of the most popular bus stations in New Zealand. Click on each station name to get more information about it.

Hire a coach in New Zealand

Bus rental in New Zealand is a pretty popular way of getting around the country. There are numerous bus companies offering rental services, most of them are the same ones which offer bus tours. Similar to other countries, hiring a coach in NZ usually starts from an airport or a larger city like Auckland or Christchurch. Generally speaking, buses should be in good condition, but naturally that depends on the company. Of course, all bus drivers speak English (sometimes with a distinct New Zealand accent), which should make it easier when travelling.

Public transport in New Zealand cities is regulated in each city individually. Each city has its own company which manages the bus network. Auckland Transport in Auckland, Metlink in Wellington and Metro Timaru in Christchurch, to name a few. These companies have both city and suburban lines. Of course, there are buses serving other cities like Hamilton, Rotorua and Queenstown. In some cases, travelers can buy travel cards (like Auckland AT Hop Card) if they plan on staying several days in the city.

New Zealand is among the countries which handled the Coronavirus pandemic significantly better than the rest of the world. However, if you’re planning a visit, it’s best to be informed on a daily basis, and check all the regulations and rules. They can be found at the official NZ government website. It is also advisable to check the regulations for your own country, which is important when you’re returning back home. As for the mandatory mask wearing in buses, these rules depend on each company, so we recommend checking this information beforehand.

Is traveling by bus in New Zealand expensive?

No, traveling is fairly affordable, especially when compared to alternative ways like flying or renting a car. Tickets for some of the intercity routes start at few dollars, making it a good choice when travelling the country.

Public transport in NZ is mostly focused on buses, and to some extent to urban rails (Auckland and Wellington). Travel delays can of course happen, but it’s all within regular limits. Buses are usually in good condition, and there are further plans on improving the network operating costs and infrastructure.

How do you pay for a bus ticket in NZ?

Intercity bus tickets can be bought online, or at the designated bus stations. The same applies for the city buses. All the city bus companies are encouraging travelers to buy tickets in advance, especially since the COVID-19 pandemic. In some cases, you can use cash to pay for the bus.

Can I bring my pet on the bus in New Zealand?

No, unfortunately on the intercity and city buses, animals are not allowed, except assistance dogs.

Do the buses in New Zealand have Wi-Fi?

This depends on the company. All buses by Intercity are offering free WiFi service, as do public buses in larger cities like Auckland and Christchurch.

Are there sleeping buses in NZ?

Yes, in some cases, certain bus routes are serviced by so-called sleeper buses, which are available for the longer routes. Along with the bed, USB plugs and a free WiFi service are usually included.

Is my luggage safe when I travel on a bus in New Zealand?

Luggage in New Zealand is handled as anywhere else in the world. Losing a suitcase could happen (e.g if a fellow passenger takes the wrong suitcase), but not that often. Intercity also allows you to bring your bike on board. On most Intercity buses, bringing 2 bags of up to 25 kg is free of charge.

If you operate a New Zealand bus company and would like to be included in this list, you are more than welcome to contact us, we also can offer you the access to an easy platform for managing bus rentals in New Zealand.