California has a significant number of commercial airports. With 9 large and medium hub airports and more than a dozen of smaller ones, it’s one of the best covered USA states in terms of air traffic. LAX is the busiest and largest of California airports, followed by San Francisco and San Diego. These airports handle hundreds of millions of passengers each year. All the major USA airlines operate at California airports. Therefore, there are several options to choose from when visiting The Golden State. To better visualize where each California airport is located, make sure to check the map of airports in California.

Los Angeles International Airport, famously known as LAX is the main airport of the Los Angeles Metropolitan area. LAX is in the top 5 of busiest US airports and world airports. The airport is a hub for several airlines – American, Delta, United, and Air New Zealand, just to name a few. San Francisco, NYC, and Las Vegas are top domestic destinations, while London and Mexico City lead the way for international routes. LAX has an unreal 9 passenger terminals. The airport is located about 30 km southwest of downtown LA. To get there, passengers can choose between public transportation, airport shuttles, taxis, car rentals, etc.

San Francisco International Airport is one of the busiest US airports, as well as 2nd busiest airport in California. The airport is located about 20 km south of SF downtown. Getting to the city is possible via numerous transport options. Most notably by public buses, shuttles, taxis, and car rentals. Bay Area Rapid Transit and SamTrans are 2 public transit options. As for the airport, it’s a hub for United and Alaska Airlines. LA and Seattle are top domestic destinations, and London and Hong Kong international. Moreover, SFO airport has 4 huge terminals, so it’s really easy to get lost in there.

San Diego Airport is a major US airport located 5 kilometers north of the city. The airport serves mostly domestic routes, with a few connections to Europe, Mexico, Canada, and Japan. Like other large US airports, it is a hub for several airlines, such as Southwest, Alaska Airlines, Delta, and United. The airport, also called Lindbergh Field, has 2 large terminals. Most of the domestic traffic comes from West Coast cities like San Francisco, Seattle, and San Jose. Getting to San Diego city is possible by public transportation (bus route 992, Amtrak intercity train, Commuter train), as well as with trolleys, taxis, and shuttles. SAN airport is fairly close to other cities like Escondido and Tijuana.

San Jose Airport serves the city of the same name, in the Bay Area. Airport’s full name is Norman Y. Mineta San José International Airport. The location of the airport is about 5 km north of San Diego downtown. To get there, one can choose between public buses, trains, limousines, shuttle buses, taxis, and car rentals. SJC airport has 2 airside connecting terminals. Guadalajara is the top international connection, while California cities LA and San Diego are leading domestic routes. Southwest Airlines, Alaska, and Delta are the top carriers at the airport.

Oakland Airport is the second largest airport in the SF Bay Area. The airport handles mostly domestic routes and flights to Mexico. With 13 airlines and more than 50 destinations, it is among California’s busiest airports. AllegiantAir, JSX, and Southwest Airlines are top carriers at OAK airport. Las Vegas, LA, and San Diego are top domestic, and Barcelona and London top international connections. The airport is located about 25 km SE from San Francisco and 13 km from Oakland. Therefore, to get there, travelers can choose between BART public transportation, Amtrak lines, shuttles, taxis, and car rentals.

Sacramento Airport is the main point of entry for Sacramento, as it’s located about 15 km north of the city. Passengers use it a lot when traveling to attractions like Napa Valley, Lake Tahoe, or Yosemite National Park. Similar to Oakland Airport, the main focus is on domestic routes. Therefore, San Diego and LA are top US destinations, and Southwest Airlines is the main carrier. SacRT public transport connects the airport with the city. Also, there are airport shuttles, taxis, and car rentals available. 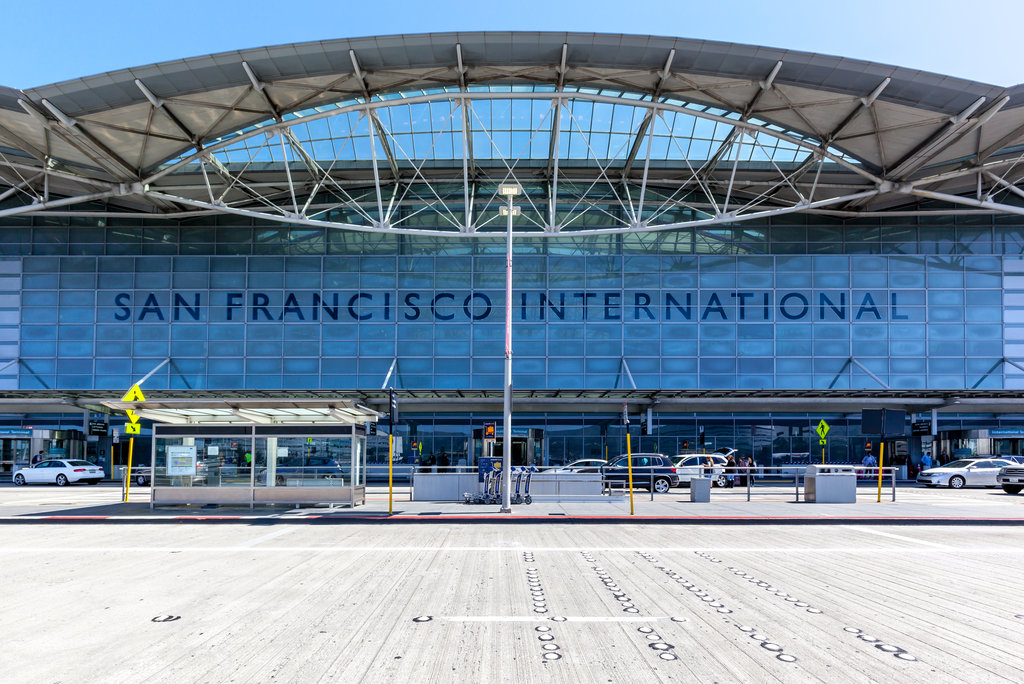 A look from the outside of San Francisco Airport in California

John Wayne Airport is an international airport located in Orange County. The airport serves several cities – Santa Ana, Irvine, Newport Beach, and Irvine. The airport is within 10 km of these cities, and about 60 km south of LA. Formerly known as Orange County Airport, it is named after famous actor John Wayne, who lived in Newport Beach. Airport’s focus is domestic connections, mostly by Southwest Airlines, United, Delta, and American Airlines. The airport has been ranked as the 33rd best airport in the world, according to travelers. Getting to the airport is simple, due to various ground transportation options – public buses, trains, shuttles, taxis, and so on.

Ontario International Airport is located in Southern California, 3 km east of Central Ontario and 65 km east of Downtown LA. Apart from Ontario, the airport serves other cities in San Bernardino County. Southwest Airlines and low-cost Frontier are among the carriers operating at the airport. The focus is on domestic routes, therefore Phoenix and Dallas are the busiest routes. As for ground transportation, it is various, from public buses, metros, trains, shuttles, taxis, and so on.

Burbank Airport is another airport in the greater LA area, located 25 km north of the city. The airport is also called Bob Hope Airport, after a famous stand-up comedian. Apart from LA, the airport serves the cities of Burbank, Pasadena, and Glendale, among others. 2 terminals handle passengers flying with jetBlue, JSX, and Southwest Airlines, to name a few. Top non-stop connections are mostly domestic, California cities. As for the transport to and from the airport, choices are various, from public transport to shuttles and taxis.

Long Beach Airport is a commercial airport located about 5 km north of Long Beach Downtown. Also known as the Daugherty Field, the airport is committed to operating as a ‘green, environment-friendly’ airport. Currently, the LGB airport handles mostly domestic routes via jetBlue and Southwest Airlines. Amtrak, MetroLink, and Metro Rail System offer train lines to the airport, while Long Beach Transit is the main public bus operator. There are also airport shuttles and taxis on site.

Palm Springs Airport serves residents of Coachella Valley and its surrounding area. It is located 3 km east of Palm Springs center. San Francisco and Seattle are top domestic routes and there are several low-cost airlines like jetBlue, SunCountry, and Frontier operating at the airport. A variety of transportation is available, from public Sunline Transit Agency and Amtrak lines to airport shuttles and taxis.

Fresno Yosemite Airport is an airport serving Fresno city, located about 7 km away. It is commonly used for travelers visiting nearby national parks of Yosemite, Sequoia, and Kings Canyon. Regional airline SkyWest is the top carrier, followed by American Airlines. Getting to Fresno is possible by public transport (FAX and V-line), while YARTS offers transport to Yosemite. Other options include shuttles, taxis and car rentals.