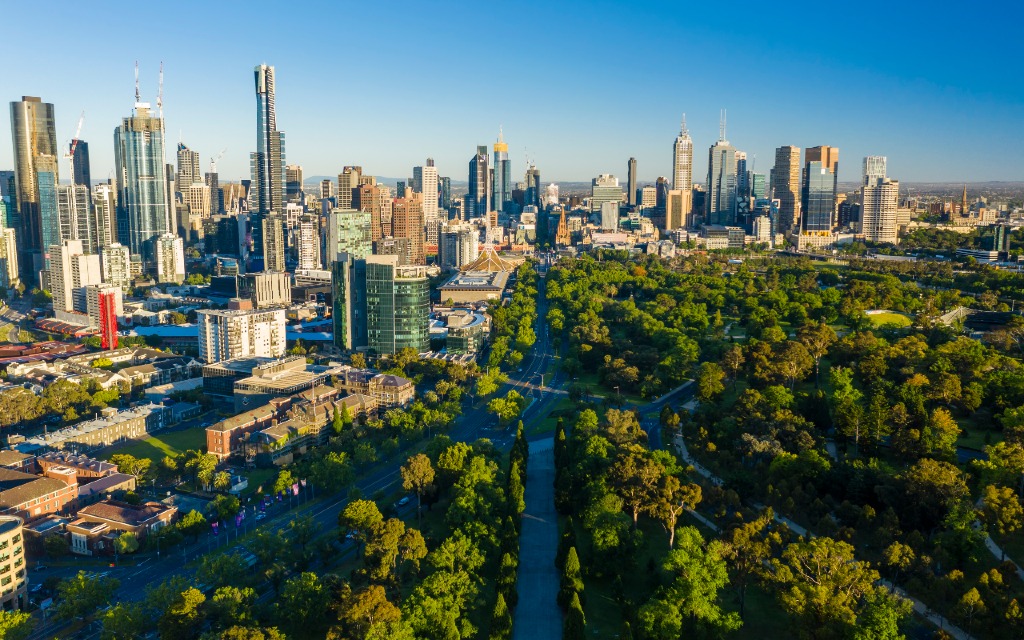 Covering an area of about 7.7 M square kilometers, Australia is an enormous country. Traveling by bus in Australia is, along with flying, the most common way of getting around the country. Due to its size, travelling between certain cities can take quite some time. Nevertheless, there are regular daily (or in worst cases weekly) buses between the largest Australian cities. On the other hand, the train network is not as extensive as bus transport. And although flying is a common way of getting around, it’s still somewhat more expensive than taking a bus. The latest research estimates that the coach sector in Australia (long distance buses, bus tours, charters) transport over 1.5 million domestic passengers each year.

As mentioned above, Australia is a huge country, consisting of six states. Therefore, it’s important to distinguish terms like intercity bus and interstate bus. Interstate buses refer to the ones driving from one Australian state to another, while intercity buses drive between cities in the same state. Basically there are three companies handling long distance interstate bus lines. However, in most cases travelers end up using Greyhound services, as they have the largest bus network. In some cases bus companies offer night buses on these long distance routes. Even though there are no sleeper buses available, there are regular 15 to 30-minute breaks, usually taking place at resting areas. Interstate buses are generally in good condition, usually equipped with WIFI, toilet, in-seat USB chargers, reclining seats and air conditioning.

As for the intercity bus lines, each Australian state has several bus companies offering regular daily departures. In most cases buses depart from the state capital, and leave for other towns. Of course, not all buses have a starting point in the state capital; there are also buses connecting smaller cities and towns.

Timetables for the majority of intercity and interstate routes can be found online, as well as at the bus stations in larger cities. It is recommended to check the timetable beforehand, as COVID-19 pandemic altered many of the departures offered by various companies. Being a technologically advanced people, Aussies usually buy their bus tickets online. Tickets can also be bought at bus stations, but note that prices might not be the same as when buying them online.

Being a continent-country, all the bus routes in Australia are, of course, domestic. Majority of bus lines are focused on coastal cities and state capitals of Victoria, New South Wales and Queensland. Probably the most popular bus route is the one from Melbourne to Sydney. Trip duration with buses can take anywhere from a few hours to an entire day, especially when going to remote destinations in Western Australia or Northern Territory. Below we have listed the most popular intercity and interstate bus routes. If your desired route is not on the list, you can use the search form above to find other travel combinations.

Australia has dozens of airports offering scheduled commercial flights. The largest and most important Australian airports have well-organized public transportation to their respective cities. In most cases, passengers can use public transportation (buses) to get there. At smaller airports where public transport is not available, there are dedicated shuttle bus companies with departures to the cities. Airports in larger Australian cities like Sydney or Brisbane also have trains driving to and from the airports. Of course, there are also taxis and door-to-door services available. In general, getting to the nearby city from the airport using public buses or airport shuttles is a relatively easy and affordable option.

Bus stations in Australia are sometimes referred to as coach terminals. Every large city has at least one bus station, while some cities like Melbourne and Sydney have multiple. Many of the smaller towns don’t have a bus station, but rather a bus stop indicating where passengers can get on board. Below we have listed some of the most popular bus stations in Australia. Click on each station name to get more information about it.

Hire a coach in Australia

Bus rental in Australia is another popular way of getting around the country, especially when traveling as a part of a larger group. There are numerous companies offering coaches to rent, with the driver on board of course. These companies are usually the same ones which have organized bus tours to most popular Australian destinations like national parks or beach resorts. The quality of buses depends on the company, however most of them should be equipped with basic amenities like AC and toilet, especially when travelling multiple days.

It is estimated that in a three-month period over 12 million people aged 14+ use Australian public transportation. With the exception of Darwin, all larger Australian cities have an extensive multimodal transport system which includes buses, commuter rail, and in some cases watercrafts. Each city has its own company which handles public transportation. As for the public buses, they connect the greater city area and suburbs with the city centers (CBD). Traveling with public transportation is generally affordable and you can save some extra money by purchasing public transport passes. That could be a good idea if you’re staying a few days in the city. Tickets and passes can be bought from fare machines at bus stations, train stations, at major interchanges, and of course online. Below is the list of the companies handling public transport in each city.

Bus travel in Australia and Covid-19?

As the rest of the world, Australia implemented numerous rules and regulations regarding the ongoing COVID-19 pandemic. These regulations have also affected traveling to and around Australia. To be 100 percent sure you’re getting the correct information, we recommend checking the official website of The Department of Health. Also, it’s a good idea to check rules each state has implemented for anyone traveling by bus. As for the mandatory wearing of masks on buses, keeping a physical distance from other passengers and other rules, you can check that information with each bus company.

Is bus travel safe in Australia?

Generally speaking, traveling by bus in Australia is pretty safe. Bus companies keep upgrading their fleets, which has led to less accidents on the road. Although there are still older buses on the road, there is an ongoing initiative for removing older vehicles from the road as soon as possible. As for safety while you’re onboard the bus, just follow the usual guidelines; keep your documents and valuable items with you at all times. Bus stations in the larger cities are well equipped and usually filled with a lot of people, so you should also be safe there at most times.

Is bus travel expensive in Australia?

Traveling by bus in Australia is the cheapest way of getting around. Although it might take more time to get to certain places, it is still more affordable than flying there. Public transportation is also not too expensive, especially if you decide to buy daily or weekly passes.

How do I buy a bus ticket in Australia?

If you’re traveling on intercity or interstate bus routes, it is best to buy tickets online or at the bus stations. You can use GetByBus platform to find and purchase tickets. As for the public buses, tickets can be purchased at designated fare machines.

What is the cheapest way to travel around Australia?

Traveling by bus is the cheapest way to get around Australia. Even on the most popular routes, it is still cheaper than traveling by train or plane.

If you operate an Australian bus company and would like to be included in this list, you are more than welcome to contact us, we also can offer you the access to an easy platform for managing bus rentals in Australia.