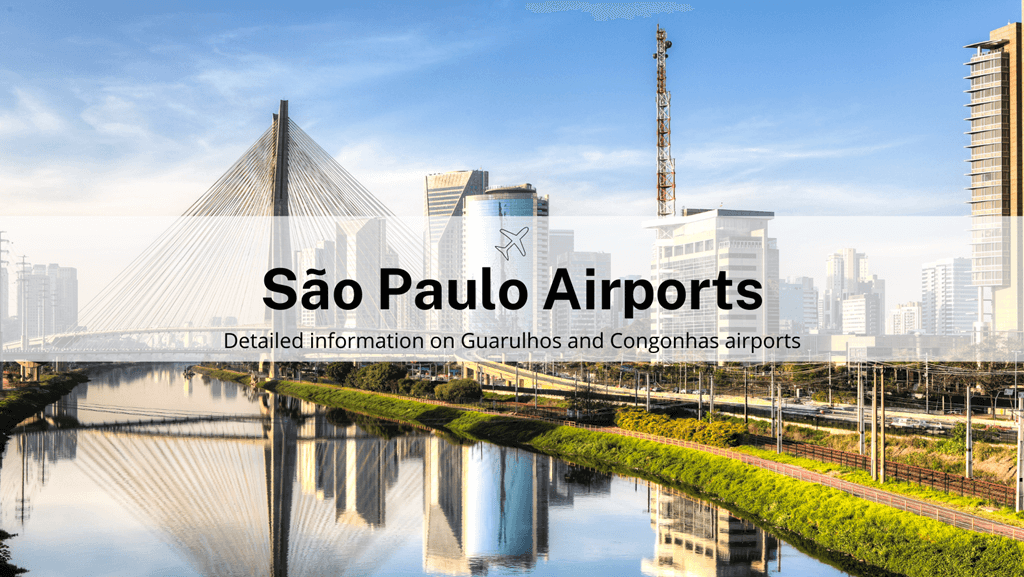 Based on the last available data, these two airports combined handle more than 64 million passengers, which makes them the two busiest airports in Brazil. Both airports are to some degree operated by Infrareo, a state-owned enterprise responsible for managing commercial airports in Brazil.

There is also a third airport in São Paulo, named Campo de Marte, but it only handles private jets and light aircraft.

Read on and find out everything you need to know about airports in São Paulo!

Guarulhos or Cumbica Airport, as the locals call it, is the busiest Brazilian airport, and the second busiest in Latin America. According to last available data, it handles over 43 million passengers.

There are 3 terminals at the airport, but only the first one is used for domestic flights.

Airports in Sao Paulo are relatively close to the city center and there’s a lot of transportation options available. You can get to the downtown of Sao Paulo either by car, bus, taxi, metro, or transfer.

Check out the table below for information about transportation options in Sao Paulo.

Which São Paulo airport is the best?

Choosing the best São Paulo airport to fly into depends on several things, most notably where you’re departing from, what the purpose of your visit to São Paulo is, and where your accommodation is located.

When traveling to São Paulo center

If you want to get as soon as possible to São Paulo city center, the best airport to land is Congonhas Airport. It’s pretty close but you still have to take a bus, taxi, Uber or tram to the center. If you go by car, it will take around 30 minutes to get there.

On the other hand, when you land at Guarulhos Airport, the quickest way to the center is by train (line 13) which takes about 45 minutes.

There are also red and blue buses which take you from the Guarulhos airport to the center. It takes an hour to get to Sao Paulo city center, but the waiting time between buses is three hours!

Traveling from one São Paulo airport to another

Luckily, there are easy ways to get from one airport to another.

The shuttles are located on Terminals 2 and 3 and operate daily. The waiting time between shuttles is about 1 hour.

Traveling from São Paulo airports to other cities

Below are some of the most popular routes from Sao Paulo.

Are there any hotels near São Paulo airports?

Yes! At the Guarulhos Airport, you can find a hotel Fast Sleep. It’s located on the ground floor of terminal 1.

There’s no hotel at the Congonhas Airport, but there are a few in the vicinity. Hotel Ponte Aerea is located just 600 m from the airport so you can get there on foot. You can take the airport shuttle to nearby hotels Ibis São Paulo Congonhas and Nobile Suites Congonhas.

Is there a free WiFi service at São Paulo airports?

Are there money exchange and luggage storage services at São Paulo airports?

There are money exchange services and ATMs at the Congonhas Airport and luggage storage that works from 6:00 AM – 11:00 PM.

At the Guarulhos Airport, there is a money exchange service Cotação Exchange on the first floor of the landside. Malex do Brasil lockers are available on all three terminals and are open 24 hours.

How early to arrive when departing from São Paulo airports?