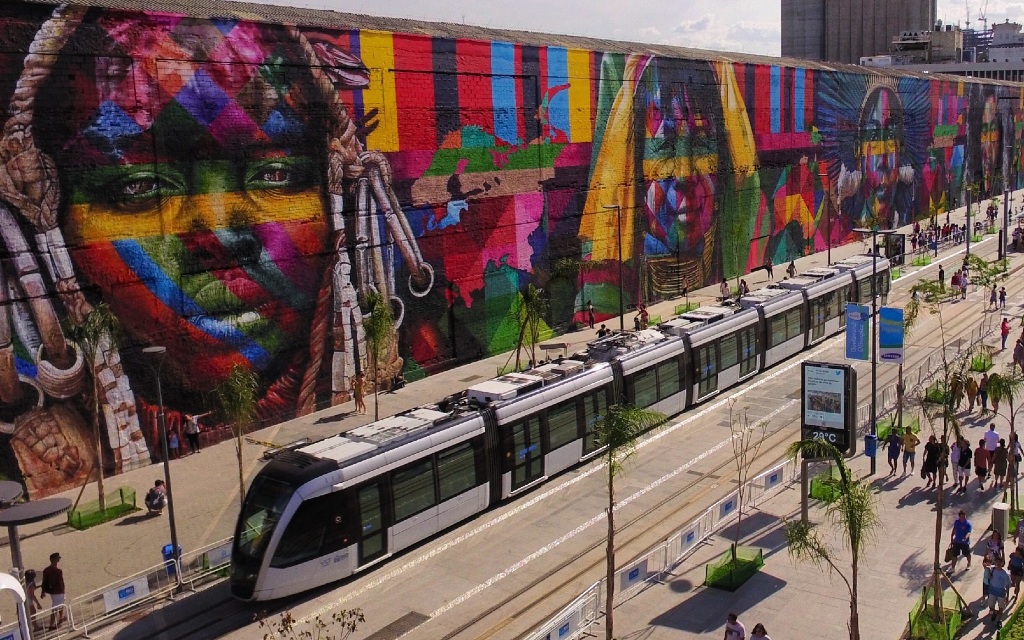 Traveling by bus in Brazil is beyond doubt the most important way of transportation. One reason for that is that Brazil basically doesn’t have passenger rail routes, which means people can only use buses or planes when travelling between cities. In the larger metropolitan cities there are metros and other regional trains, but even there the buses are by far the most important form of transportation. The number of intercity buses in Brazil is said to be roughly the same number as in the whole of Europe!

As mentioned above, travelling with intercity buses in Brazil is the main form of transportation in the country. On the majority of travel routes buses are the only option, and on travel routes where the plane is an alternative, buses are almost always the cheaper option. Travelers who expect bus service to be of lesser quality are in for a surprise. The bus service and the buses used in Brazil are of a very high standard. The Ministry of Transportation has defined different fare classes which the bus companies may offer. Therefore many bus companies offer several fare classes on the same bus.

There are 4 most common fare classes, all listed below. On the majority of long-distance travel routes, you should be able to find all of them.

As a base service majority of buses are equipped with WIFI (which works best along highways), USB charger, (emergency) toilet and legrest. Buses usually have a 20-30 minute break for each 3-4 hours of driving. The breaks are usually at larger rest places with free toilet facilities and restaurant / fast food places.

Buying a ticket for an intercity bus

You can buy tickets for most departures online. However, if you are not a Brazilian citizen you can not buy a ticket at any website. The reason for this is you need a so called CPF number, which is a Brazilian tax ID number. As a foreigner you can only buy tickets at international websites. You will be required to enter an ID number when buying a ticket (voucher). Once you get to the bus station you will have to exchange your voucher for a ticket at the outlet of the bus company. You will be required to show the ID you used for the voucher purchase, after which the outlet will issue you a real ticket with your ID number printed on it.

You can of course also buy a ticket directly from the company at the bus station. This is a good choice if you do not need to travel at a specific time.

As it is usually quite hot in Brazil, warm clothes are normally not something you need. However, the intercity buses often have a very good cooling system, so it can actually be a bit cold in the bus, especially if you have to sleep. Therefore, make sure to bring some warm clothes to cover yourselves up during the trip.
NOTE: Some bus companies provide blankets for passengers who bought a sleeping seat ticket.

What is a bus called in Brazil?

Brazil is a Portuguese-speaking country, so of course there are several different words related to bus travel. Here are some words which might be good to know when travelling around Brazil by bus.

As mentioned above, intercity buses connect all parts of Brazil. On very popular routes like Sao Paulo to Rio de Janeiro there is a departure every 10 minutes in the peak hours of the day. As distances can be long, there is also an option to travel with an overnight bus on many routes and if you book a sleeping seat (Leito), you can get a good night sleep and save accommodation costs. Below we have listed some of the most popular domestic bus routes in Brazil.

From Brazil there are buses to the majority of neighboring countries which are the following; Uruguay, Argentina, Paraguay, Bolivia, Peru, Columbia, Venezuela, Surinam, Guyana and French Guiana. In most cases the buses drive from larger Brazilian cities near the border to these countries. There are also longer international bus lines such as from Sao Paulo to Asunción, the capital of Peru or from Porto Alegre in the south of Brazil to Montevideo (the capital of Uruguay). Majority of the international bus routes can be found from cities in the southern part of Brazil.

Obviously due to COVID-19 there are travel restrictions to consider especially when travelling between countries.

All major airports in Brazil have well-organized public transportation, which as a minimum include a bus to the nearest larger cities. From the large airports there are usually shuttle buses to nearby larger cities. From the very large airports there are train / metro connections; e.g.  from São Paulo Guarulhos Airport to São Paulo. Of course you also have taxi services from the airports. Generally, transportation form the airports is relatively inexpensive and well organized

Please note regular intercity buses usually do not drive from the airports. Therefore if you need to continue your trip by bus, you will have to go to the bus station in the larger cities to do so.

Majority of bus companies operate intercity bus lines only, but some also offer parcel service and tourist buses for rent. In cities there are of course companies only doing local and suburban transport. Below we have listed some of the most important bus companies in Brazil.

NOTE: Especially in smaller cities, some bus companies have a departure location which is not a bus station, but an outlet located next to their sales points in town.

Some Brazilian bus stations are very big, like the Rodoviária Tietê in São Paulo, which is actually the world’s second largest bus station. Below we have listed some of the most popular travel cities in Brazil. Click on the link to see information about bus station(s) and stops in the city.

Hire a coach in Brazil

With the many bus companies in the country, renting a bus in Brazil is not a problem. All the major cities have several companies offering rental service. Similar to the intercity buses, the standard of the coaches for bus rent is very high. Amenities like air conditioning, reclining seats, toilet and even refrigerator is quite common. What might be an issue is finding a coach with an English-speaking driver. We recommend having a local guide accompanying your group for solving this issue.

Some of the larger companies have dedicated staff taking care of rental requests. However, most of the websites are only available in Portuguese, so it is often easier to arrange the rental via an agency.

Travelling with public transportation is quite cheap, the system for buying a ticket varies from city to city, so we recommend you ask at your accommodation how to use public transport. As an alternative to public buses, most cities also have inexpensive taxi services. Uber is also present in many cities in Brazil.

Bus travel in Brazil and Covid-19?

Similar to other countries, Brazil also had to implement various restrictions to limit the spread of COVID-19. These restrictions have impacted intercity buses, as well as public transportation in the cities. Bus companies are obligated to follow national and local rules, so as a traveler you should be in safe hands. We recommend asking locally about any restrictions which apply at the time of your travel.

Is bus travel safe in Brazil?

Intercity bus travel in Brazil is quite safe. As a traveler you should of course use common sense; meaning you should not leave documents and valuable items in luggage for the hold. Keeping documents and money in a belly bag or travel pouch is a recommendable.
Semi-leito and Leito travel classes give you more space to keep a bag in your seat while travelling. These travel classes are sort of separated from other classes on the bus.
If the bus is travelling interstate, IDs of travelers are checked and recorded.
On city buses pickpocketing is something which occasionally happens, so be extra careful if you travel with public buses (or subway), especially in the larger cities.

Is bus travel expensive in Brazil?

Intercity buses as well as public transportation is cheap, even if you travel on the best fare classes.

How do I buy a bus ticket in Brazil?

As mentioned above, you can buy a voucher with a specific seat online on international bus platforms like GetByBus, or you can buy your ticket at the bus station. In either case you will need an ID to purchase the ticket.

How to get around in Brazil?

Getting around in Brazil is possible by bus or plane. As mentioned above, the intercity buses are the most used form of interstate and city transportation.

If you operate a Brazilian bus company and would like to be included in the is list, you are more than welcome to contact us, we also can offer you access to an easy platform for managing bus rentals in Brazil.