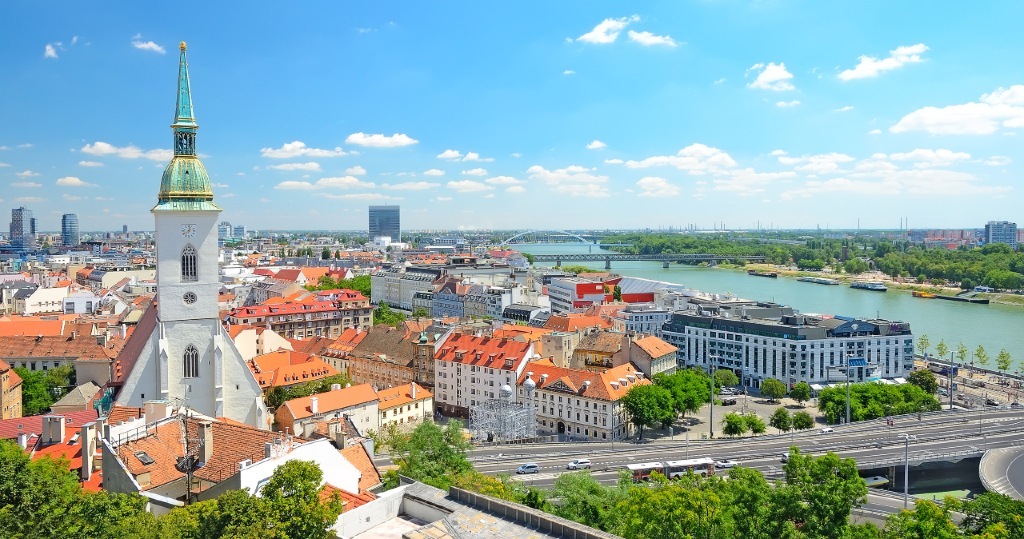 Travelling by bus in Slovakia is still the most popular way of getting around the country. Despite the well developed train network, reaching some of the smaller towns is possible only by bus. Of course, buses also connect larger Slovak cities. Moreover, in comparison to trains, for most routes, taking a bus is a cheaper and faster way of getting from one city to another. Slovak highways, although not in a perfect condition, keep getting better, meaning that you can get fairly quickly from one part of the country to another, e.g. from Bratislava to Kosice.

Taking an intercity bus is the most common way of travelling between Slovak cities. Currently there are several bus companies offering daily departures from the most important cities. Bus travel is becoming more and more popular, due to the affordable bus tickets. Moreover, Slovakia is a fairly large country, however getting from one part of the country to another via bus can be done pretty quickly. The latest study from 2013 says there were 270.000 people travelling on non-urban buses, but that number is definitely much higher today, as seen by the number of new bus companies popping up each year.

Timetable for intercity, regional, suburban and local buses can all be found online. Alternatively, you could get the timetables from the main bus stations. You can also use the search form above to find the travel combination you need. Buying tickets online is de facto the standard today, especially since the Coronavirus pandemic restricted physical contact among people. Another advantage is that online tickets tend to be cheaper than the ones bought at bus stations. There are also various discounts for students or larger groups, so make sure to check that before traveling.

Below are some of the most common words you might encounter when traveling by bus in Slovakia:

Domestic Slovak bus routes connect large cities with even the smallest towns and villages. Since the bus network in Slovakia is widespread, it shouldn’t be a problem to find a bus going to even the smaller country settlements. There are multiple daily departures between large cities such as Zilina, Kosice, Trnava and Bratislava. Below we have listed the most popular domestic lines in Slovakia.

Slovakia is positioned in central Europe, and surrounded by several other countries. The majority of international buses go to the neighboring countries of Czech Republic, Hungary, Poland and Austria. There are also routes to eastern countries such as Ukraine and Romania. Bratislava and Kosice are the most common departure cities from Slovakia, but there are also routes going from or through other Slovak cities. Licensing of the international routes is done by the Slovakian Ministry of Transport, and coach transport has been liberalized since 1996.  Below are listed the most popular international routes in Slovakia.

There are four Slovak airports offering scheduled commercial flights. Although most passengers fly into Bratislava airport, there are also flights to smaller airports located in the cities of Kosice, Poprad and Silac. All airports, except for Poprad airport, have scheduled buses going to their respective cities. Due to its proximity to Vienna, there are also departures from the Bratislava airport to Austrian capital. Anyone looking for a door-to-door transfer, there are taxi services operating at each airport. Slovak word for the airport is letisko, and you will see that on some buses going from and to Slovak airports.

There are dozens of bus companies operating in Slovakia. That includes companies offering intercity, suburban and local lines, as well as companies handling bus rentals and bus tours. Public transport companies usually offer intercity routes too, so don’t be surprised if you encounter one company multiple times when traveling through Slovakia. Below we have listed some of the most popular bus companies in Slovakia.

As in other European countries, Slovak bus stations are usually located in or near the city center. You can recognize the stations by the autobusová stanica sign written on the front entrance. Bus stations in Bratislava, Zilina and Kosice are equipped with usual amenities like toilets, kiosks and waiting areas. However, bus stations in smaller cities might not have the same facilities, but only an outside waiting area situated right next to the bus arrivals. To see which bus stations are exactly located and which amenities are available, click on the city name below.

Renting a bus in Slovakia

Hiring a coach in Slovakia is pretty straightforward. Basically the only thing you have to do is find a company which offers rental services. Alternatively you could use a platform for renting a bus in Slovakia. Bus rental is centered around larger cities like Kosice and Bratislava. Depending on a company, buses should be in decent condition, equipped with all the necessary amenities for longer trips. Also, larger companies have English-speaking drivers, but sometimes it’s easier to let a travel agent handle the contact with the bus company.

Public transportation in Slovakia consists of city buses, trolleys, trams and metros. It is commonly known as Mestská hromadná doprava (MHD). Public buses are the most common and widespread way of transportation in the cities. All larger Slovak cities have an active urban public transport. Bus companies which drive these city routes are, in some cases, the same ones which handle suburban and long distance routes. Bus tickets can be bought at designated bus stations, from the fare machines, and of course online. In some cities you can purchase a city bus card (pass), which can save you some money, especially if you plan on staying multiple days in the city. In general, bus tickets to get around Slovak cities are not expensive, and usually cost up to a few euros.

Below is the list of companies handling public transportation in larger Slovak cities:

Covid-19 and bus travel in Slovakia

Similarly to other European countries, Slovakia also had to implement various rules and regulations to prevent the spreading of COVID-19 virus. Of course, these rules also affected the travel industry. This is why it’s important to stay informed about the Coronavirus situation. To stay up to date, make sure to visit the official website of Slovak government website and follow all the latest news regarding travel. We also recommend checking the travel guidance for your own country, as you might be required to do different safety measures such as mandatory quarantine.

Is it safe to travel by bus in Slovakia?

Overall, Slovakia is a pretty safe country. When traveling by bus, we recommend to follow the usual rules, such as keeping your documents and valuable items with you at all times. Slovak roads are ranked as eight most dangerous in Europe, so always look for the companies which have reliable bus fleets. Also, be careful when you’re at larger open markets or bus stations. Even though crime rates are pretty low, pickpocketing still occurs, as it does in other countries.

Can I buy a ticket on the bus in Slovakia?

If you’re traveling on intercity buses in Slovakia, bus tickets can be purchased online or at the bus stations. And if you’re using public buses, you can buy tickets on board, but make sure to have the correct amount of money with you.

Is traveling by bus in Slovakia expensive?

No, generally taking a bus in Slovakia is pretty affordable. When comparing buses with trains, on most popular routes ticket prices are pretty much the same. However, with a bus you get to your destination faster.

Do the buses in Slovakia have WIFI?

This depends on the bus company. Larger Slovak companies have WIFI service in their buses, although signal strength can sometimes be weak, due to the number of passengers in the bus. Public buses in larger cities also have a working WIFI service.

Are there sleeping buses in Slovakia?

Can I bring my pet on the bus in Slovakia?

This depends on the bus company. Some companies allow dogs to be transported, but only on selected routes. In public transport, animals are allowed on board, but only with the driver’s permission. We definitely recommend checking this before traveling, so you don’t encounter any problems while in Slovakia.

If you operate a Slovak bus company and would like to be included in this list, you are more than welcome to contact us, we also can offer you the access to an easy platform for managing bus rentals in Slovakia.