Argentina is the second largest country in South America, so no wonder it has more than 100 international, domestic and small airports. Country covers an area of about 2.78 M km2, making air travel a convenient option when visiting this enormous country. Argentinian airports are connected to most destinations in South America, as well as some European countries. In addition, there are flights to Central and North America. We’ll summarize the most important Argentina airports, so you can see which airport is the best to fly into when visiting Argentina. In conclusion, don’t miss the Argentina airports map which is located at the end of the post.

Ministro Pistarini International Airport is the largest and busiest Argentinian airport. It is also the main airport and one of three airports serving the capital city of Buenos Aires. Also known as Ezeiza Airport, it is a primary hub for several airlines – Aerolíneas Argentinas, Austral and LATAM Argentina. Pistarini Airport handles the majority of the international flights to Argentina. Airport is located about 23 km southwest of Buenos Aires. There are three airport terminals, handling international and domestic arrivals. To reach the airport, passengers can choose between public transport (buses No. 394, No. 518, No. 51 and No. 8), airport shuttles and taxis. EZE airport is a primary choice for travelers visiting Buenos Aires and its surrounding area.

Aeroparque Jorge Newbery is the second among busiest Argentina airports. Together with Ezeiza Airport, it serves the broader Buenos Aires area. AEP airport is the closest airport to Buenos Aires, located in Palermo district, just 2 km northeast of the city center. It serves mostly national flights and international routes to Uruguay. Low-cost airlines JetSmart and Norwegian Air Argentina are among the carriers operating at the airport. Airport shuttles, public buses (No. 33, No. 37 and No. 45) and taxis are all available at the airport.

Cordoba Airport is also known as Pajas Blancas Airport and by its full name Ingeniero Aeronáutico Ambrosio L.V. Taravella International Airport. It is an international airport located in Cordoba, some 10 km north of the city center. Airport is a hub for several budget carriers such as GOL Airlines, Flybondi and JetSmart. It also handles flights by major airlines like Aerolíneas Argentinas and Austral. There are regular flights to most South America countries, as well as some European destinations. Cordoba Airport is a common choice for travelers visiting nearby Punilla Valley, Alta Gracia and Mina Clavero.

Mendoza Airport is the fourth busiest Argentinian airport. It’s also known as El Plumerillo Airport and Governor Francisco Gabrielli International Airport. Airport is located in Mendoza city, about 9 km north of the center. LATAM airlines, Flybondi and Austral all have daily flights from and to the airport. Mendoza airport is the optimal choice for anyone travelling to the Cuyo region and destinations like San Luis, San Juan and Uco Valley.

San Carlos de Bariloche Airport serves the city of the same name in Rio Negro province. It is another international Argentina airport, located 14 km east of the city. LATAM, Aerolíneas Argentinas and LADE airlines all operate at the airport. To reach the city from Bariloche Airport, passengers can take public buses, airport shuttles and taxis. Airport is convenient for anyone going to Rio Negro locations like Nahuel Huapi National Park, Villa La Angostura and El Bolson.

El Palomar Airport is the third airport serving the greater Buenos Aires area. Airport is located in El Palomar city, about 20 km west of the Buenos Aires city center. EPA airport is a good choice for budget travelers, as Flybondi and JetSmart have regular flights to the airport. Aside from buses and taxis, the San Martín train line connects the airport and Buenos Aires. Out of all 3 airports, El Palomar is the closest to cities like Zarate and Rosario.

Iguazu Airport is an international airport located in the city of Puerto Iguazú. Airport’s full name is Cataratas del Iguazú International Airport. Locals call it Mayor Carlos Eduardo Krause Airport. Airport is located in the forest area, about 17 km south of Puerto Iguazú. Austral, Flybondi and JetSmart are the carriers with the most routes to the airport. Brazil and Chile are countries with most international connections to the airport. Cataratas Airport is fairly close to the famous Iguazu Falls, as well as Brasilian Foz do Iguaçu city.

Salta Airport is better known as El Aybal Airport. It is the airport serving the Salta city in the same name province. Officially named Martín Miguel de Güemes International Airport, it is located around 9 km southwest of the city. One passenger terminal handles all departures and arrivals. Andes Airlines, LATAM Argentina and national carrier Aerolíneas Argentinas have regular flights to the airport. Airport offers shuttle buses and public buses for transport. Note that public bus doesn’t stop directly at the airport. SLA airport is a common choice for travelers to cities of Purmamarca, Jujuy and Tilcara.

Ushuaia Airport is one of the southernmost Argentinian airports. It serves Ushuaia city on Tierra del Fuego archipelago. Officially named Ushuaia – Malvinas Argentinas International Airport, it’s located only 4 km from the city. LADE, LATAM and Aerolíneas Argentinas airlines handle most of the flights. Tierra del Fuego National Park and Alberto de Agostini National Park are some of the destinations close to the airport. Car rentals and taxis are currently only transport options from the airport.

Rosario Airport is one of the largest international Argentina airports. It is located in the city of Rosario and serves its greater area. Distance from the city to the airport is about 13 km. Airport has one newly built terminal handling all departures and arrivals. Officially named Rosario – Islas Malvinas International Airport, it’s a popular choice for budget travelers. Sante Fe, Villa Maria and San Nicolás de los Arroyos are fairly close to the airport. Public bus No. 115 can get you from the airport to the city. Airport offers shuttles and taxis for transport.

El Calafate Airport is the airport located in the southwestern part of Argentina. Comandante Armando Tola International Airport is the official airport name. Location of the airport is some 20 km east of the El Calafate city. Shuttle bus is the most frequent transportation type to the city. Airport offers mostly domestic flights, but also has daily flights to Chile. Airport’s traffic keeps increasing each year, as more and more tourists visit its nearby destinations like El Chalten, Torres del Paine and lakes Viedma and Argentino.

Comodoro Rivadavia Airport, also known as General Enrique Mosconi International Airport mainly serves Chubut province. Airport is situated around 10 km north of the Comodoro Rivadavia city. With more than half a million passengers, it’s one of the busiest airports in Southern Patagonia. To reach the city, passengers can choose between minibuses and taxis. 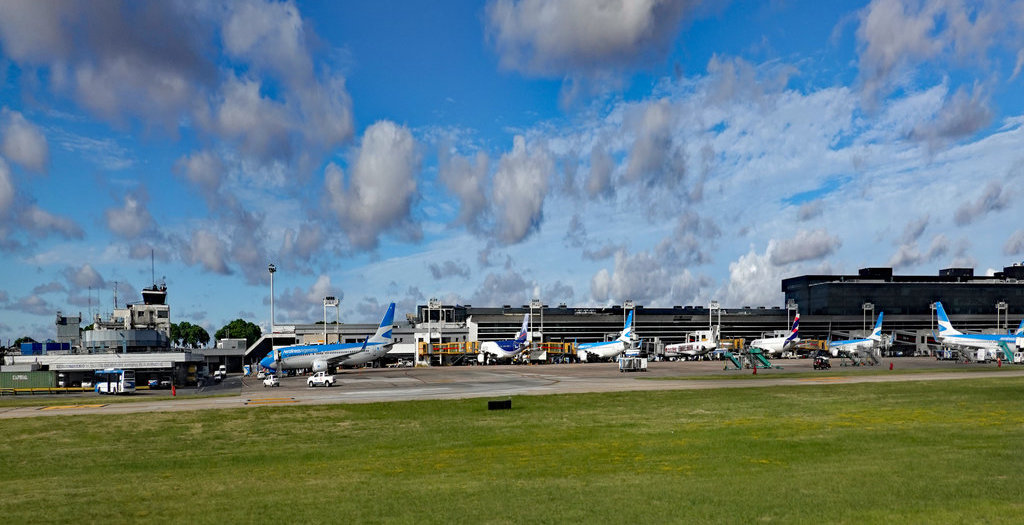 A look at the Buenos Aires Jorge Newbery Airport