There are 11 national parks in Ecuador, a biologically diverse country situated on the Equator. The parks are located in various parts of the country, the Andes region, the Amazon region, the coast, and one of them on the islands. Just the fact that one of them is among the most diverse ecosystems in the world would be enough to describe them. Hiking the parámo, or the Andean moorland, and diverse animal species is what attracts the visitors to these national parks. Some of the parks that include steep slopes, wild animals and difficult terrain might be more suitable for experienced adventurists. However, it would be a shame not to enjoy some of these beautiful landscapes once in a lifetime.

Cotopaxi National Park was established in 1975. It is situated an hour from the city of Quito, so it is a great option for a day trip. The park was established to protect one of the best natural attractions in the country – Cotopaxi volcano. Besides Cotopaxi, the park protects two other volcanoes, Rumiñahui and Sincholagua. For safety reasons, instead of hiking to the summit of the still active volcano Cotopaxi, you can hike to the 4,500 m high Jose Ribas Refuge. Also, you can choose biking to or down the mountain. Besides the volcanoes, you can also go for a hike to lake Laguna Limpiopungo. To get to the lake, use the south entrance of the park. There, you can come across various kinds of birds like Ecuadorian hummingbirds. 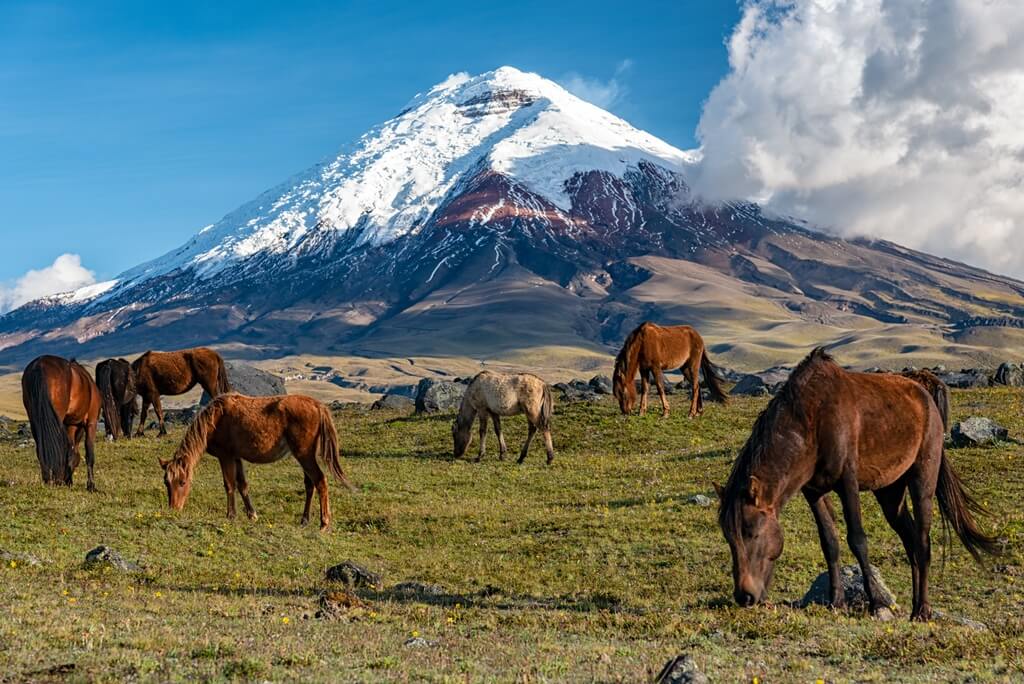 El Cajas National Park is situated in the province of Azuay. The park consists of cloud forests and moorland, but is especially known for its lagoons where you can see Andean ducks and mountain gulls. Other characteristic bird species you can find in the park are Andean condors and 24 kinds of hummingbirds. Therefore, the best way to explore the park is by hiking the fairytale scenery of the lagoons. These sceneries include humid, green valleys and paper tree forests, reminiscent of a movie scene. You can choose self-guided tours like “Toreadora”, a 2.2 km long one that goes around the lake of the same name. Another guided tour is “Cerro de San Luis” which takes you to the summit of mountain Cerro San Luis. 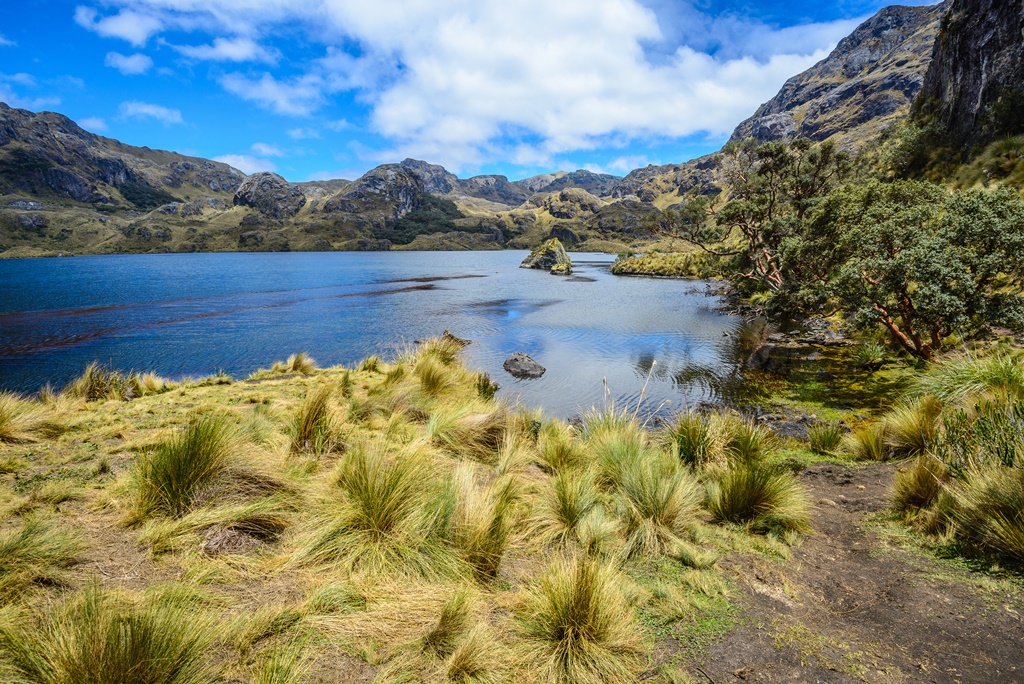 Podocarpus National Park, which was established in 1982, is situated on the border with Peru. The park is both a Ramsar site and a Biosphere Reserve, mostly thanks to 50 glacial lakes. Due to the richness of flora and fauna, it is called “The Botanical Garden of America”. Therefore, the fact that 40% of the species in the park are endemic is not surprising. The northern entrance is in Bombuscaro, from where you can hike the trails “Al Mirador” and “Cascada La Poderosa”. The first one will give you a view of the whole city and the second one takes you to see a waterfall. The southern entrance to the park in Cajanuma offers various trails as well. One of them, called “Oso de Anteojos”, is a rather short trail that takes you through a cloud forest. 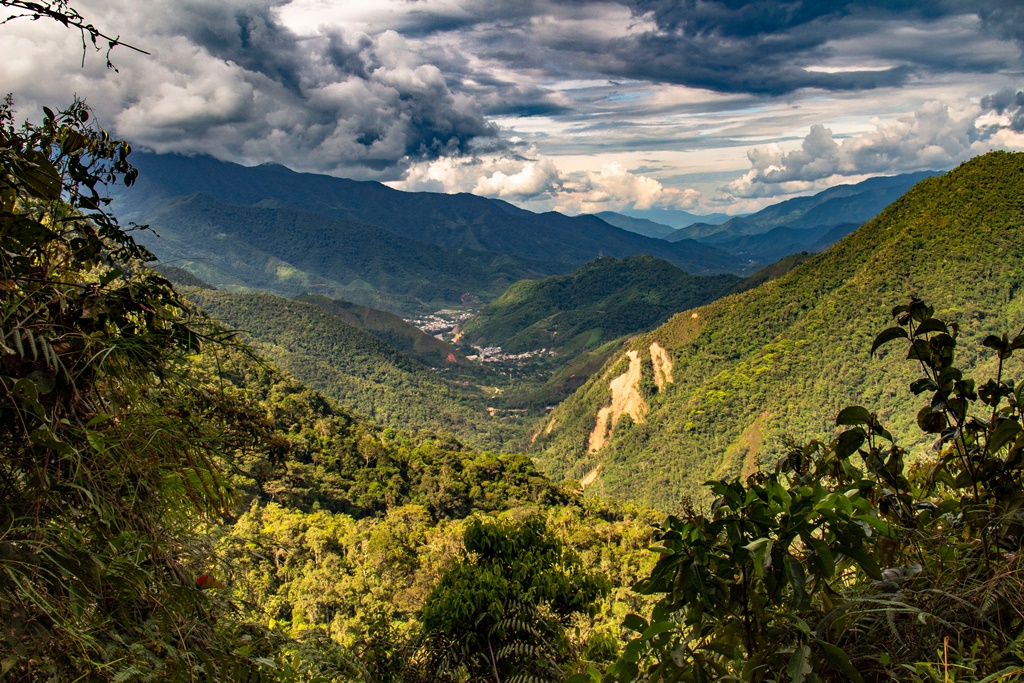 Galapágos National Park was declared a UNESCO World Heritage Site in 1979. The park includes almost all Galapágos islands, the most diverse in endemic animal species being Santa Fe island. Some of the popular hiking trails are Wall of Tears on Isabela and Cerro Tijeras on San Cristobal island. Since it is a place that inspired Charles Darwin’s theory of evolution by natural selection, you should pay a visit to Charles Darwin Research Station in Puerto Ayora on Santa Cruz. Animals characteristic to Galapágos islands include giant tortoises, hammerhead sharks, sea lions and marine iguanas. Regarding bird species, visitors can see albatrosses, flamingos and cormorants. The only way to visit the park is from Quito by plane. However, you need to pay a $100 entrance fee if you want to stay or take a cruise. Also, you can visit the national park with an authorized guide only. 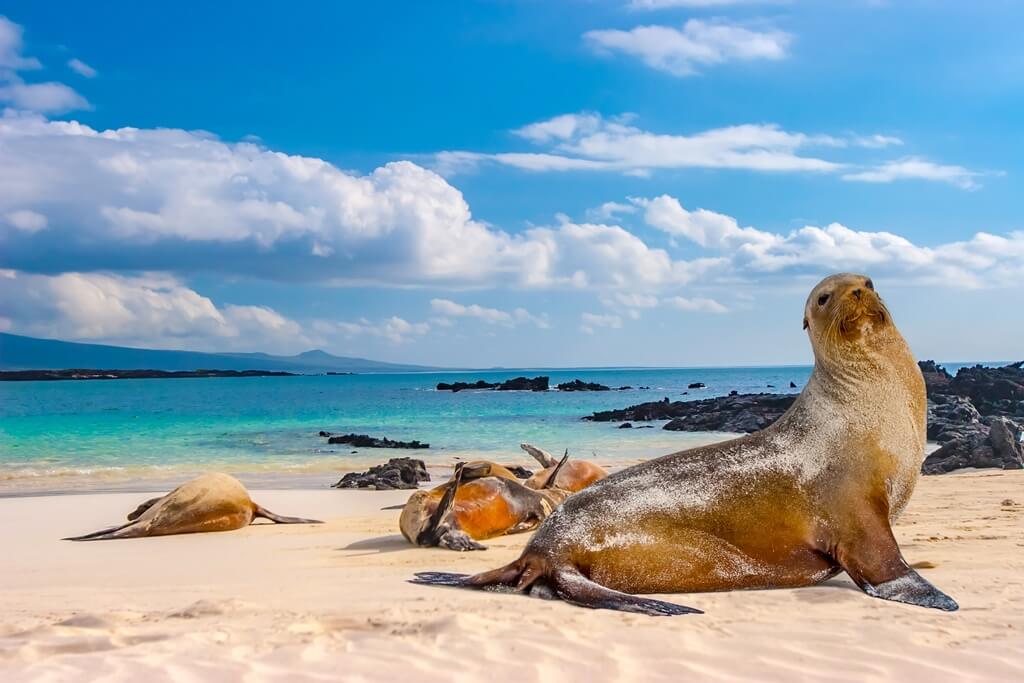 Sangay National Park was established in 1979 and in 1983 it was declared a UNESCO World Heritage Site. Alongside the three volcanoes, the park protects one of the biggest páramo or Andean moorland areas, cloud and tropical rainforests, as well as lakes and glaciers. Sangay, a still active volcano, is the one after which the park got its name and can be seen from the moor of Navac. Another active volcano, Tungurahua, is special because it has a laguna at its base. The dormant volcano El Altar is the only one that you can climb to. Animals that inhabit the park include mountain tapirs, Andean condors, spectacled bears and Andean foxes. However, most of the park is not open for visitors. There are various entrances, one of them being in the city of Penipe. 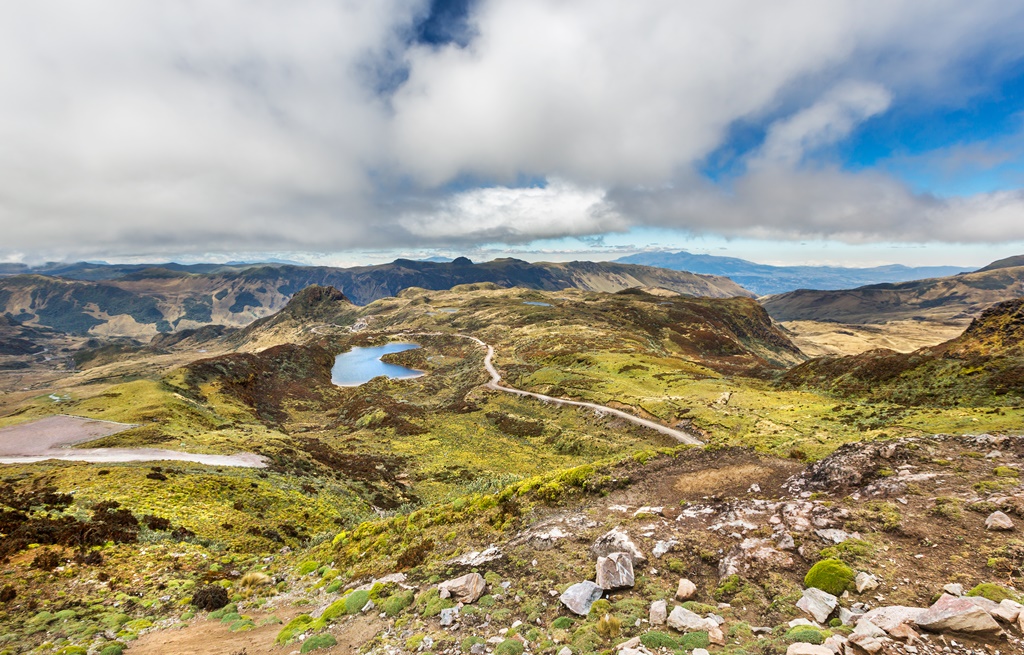 National park Yasuní was established in 1979 and declared a Biosphere Reserve by UNESCO. It’s one of the most biologically diverse ecosystems in the world. Being a meeting point of the Andes mountain range, the Amazon rainforest and the Equator, it provides the ideal conditions for the rich vegetation and animal species. However, Yasuní is also of cultural importance. It embraces the Waorani Ethnic Reserve and the “Untouchable Zone,” designated to protect indigenous people called Tagaeri and Taromenane. Vegetation, as well as birds, mammals and amphibians, all reach their maximum of biodiversity here. Therefore, the park is home to many endangered species, like jaguars and spider monkeys. You can reach Yasuní by boat from Puerto Francisco de Orellana along the Napo River and can only enter via tours organized by the park. 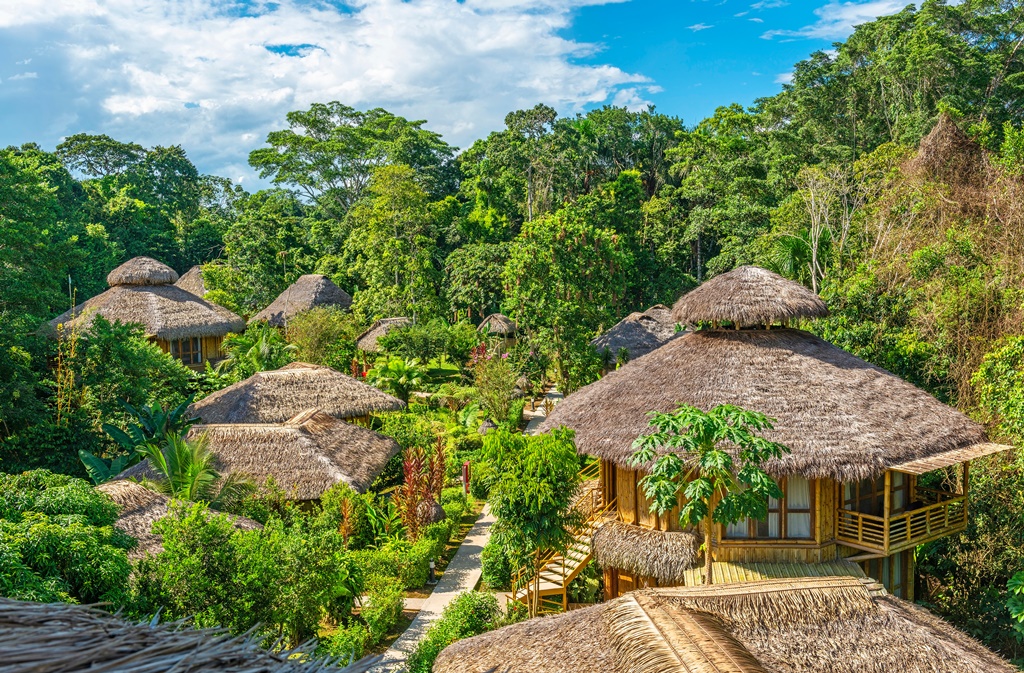 Machalilla National Park was established in 1979 to protect nature, but also cultural heritage. Its attractions are very appealing to tourists, so finding accommodation here should not be a problem. The national park embraces one of the most beautiful beaches in Ecuador, the sandy Los Frailes beach overlooking the cliffs. If you’re into archaeology, the Agua Blanca community offers a museum where you can learn about the cultural heritage of the area as well as tour the ancient ruins. Also, the community is known for the lagoon that has health benefits because of its sulfury water. The third attraction of the park is the uninhabited island Isla de la Plata that offers you five hiking trails. Besides hiking, the island is also a great bird watching spot to encounter frigates and blue-footed boobies. The entrance to the park is located in the city of Puerto Lopez. 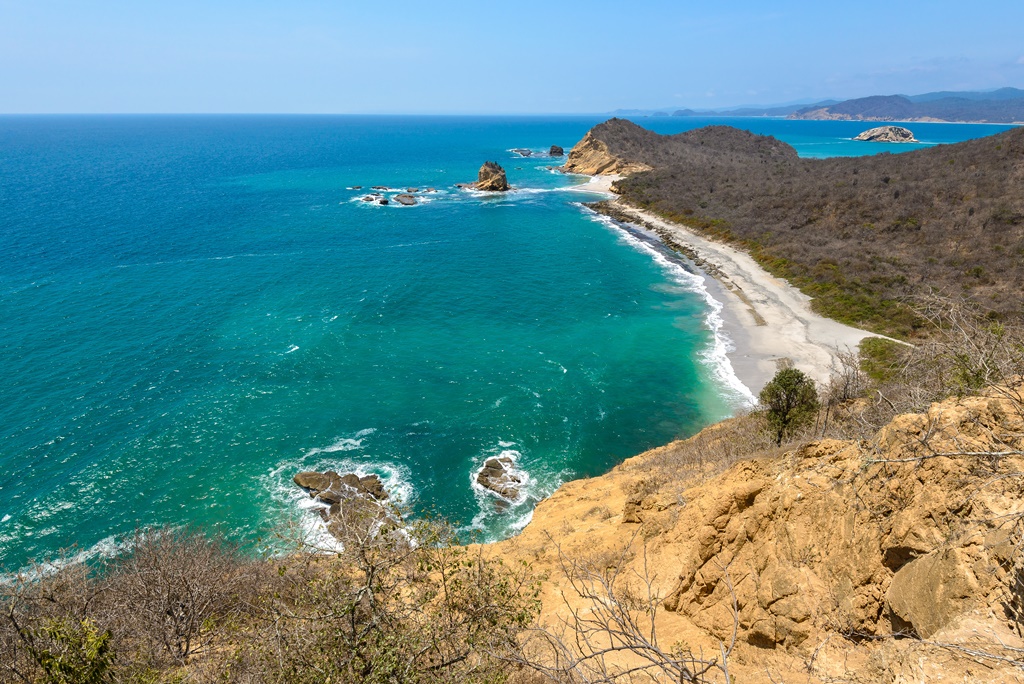 Cayambe-Coca National Park that was established in 1970 protects the sierra from the volcano and the rainforest of the Amazon Basin. The western entrance is called La Cascada San Rafael and it is the one close to Cayambe town. From there you can visit Cayambe, the snow-covered mountain peak and a volcano at the same time. The community of Rosa de Quijos is the eastern entrance that takes you to see Cascada San Rafael, the tallest waterfall in Ecuador. It stands above the ravine and there are two trails that can take you to see it. If you miss the mentioned spectacular waterfall, you can hike the trail “El Agua y la Vida” from the entrance in the town of Papallacta and spot a waterfall there. In the park, you will encounter various kinds of birds and even an Andean spectacled bear. 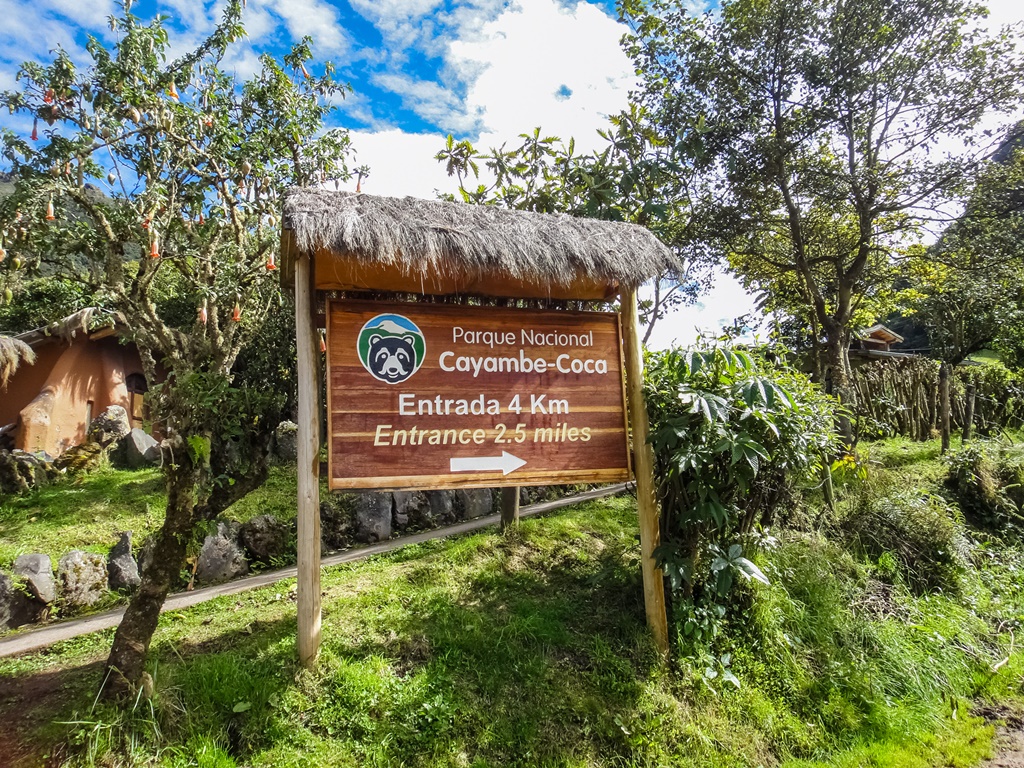 Llanganates National Park was established in 1996. The national park is the home of cloud and montane forests, lagoons and the páramo system or the moors. Lake system of 200 lagoons makes it one of the most important wetlands, protected by the Ramsar Convention for wetland areas in 2008. It is widely known for the treasure of the Llanganates, supposedly hidden there by the Inca general Rumiñahui. One of the biggest attractions is the mountain peak Cerro Hermoso. It is 4,571m high and from there, you can see the paper tree forests and frailejones, broad-leaved plants characteristic of Ecuador. If you enter Llanganates from the north, via Latacunga, you can visit Salayambo Lagoon. If you are coming via Salcedo, you can pay a visit to Laguna de Anteojos. 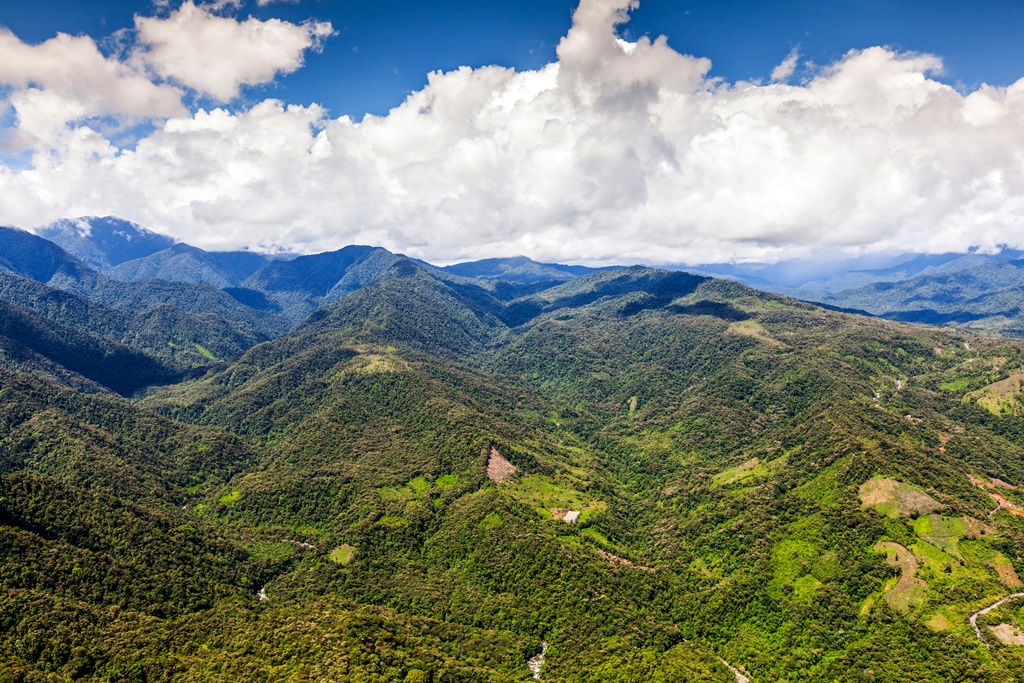 Sumaco Napo-Galeras National Park was established in 1994. In 2000 it was declared a Biosphere Reserve. It is located on the eastern mountain range of the Andes and extends across the provinces of Napo, Sucumbíos and Orellana. The park embraces the 3 732m tall volcano Sumaco and its surrounding area, Galeras mountains, cloud forests and lagoons. When hiking to the volcano, you can camp in three refuges, El Mirador, the one close to Wawa Sumaco crater lagoon, and Pava Yacu. Regarding activities, you can go hiking, kayaking and rafting, for which the Quijos River is best known. If you want organized tours you can arrange them in the surrounding cities Archidona, Tena and Baeza. Animals that you can encounter in the park are armadillos, jaguars and bears. Amphibians are particularly diverse here, and two species are even endemic to the park. 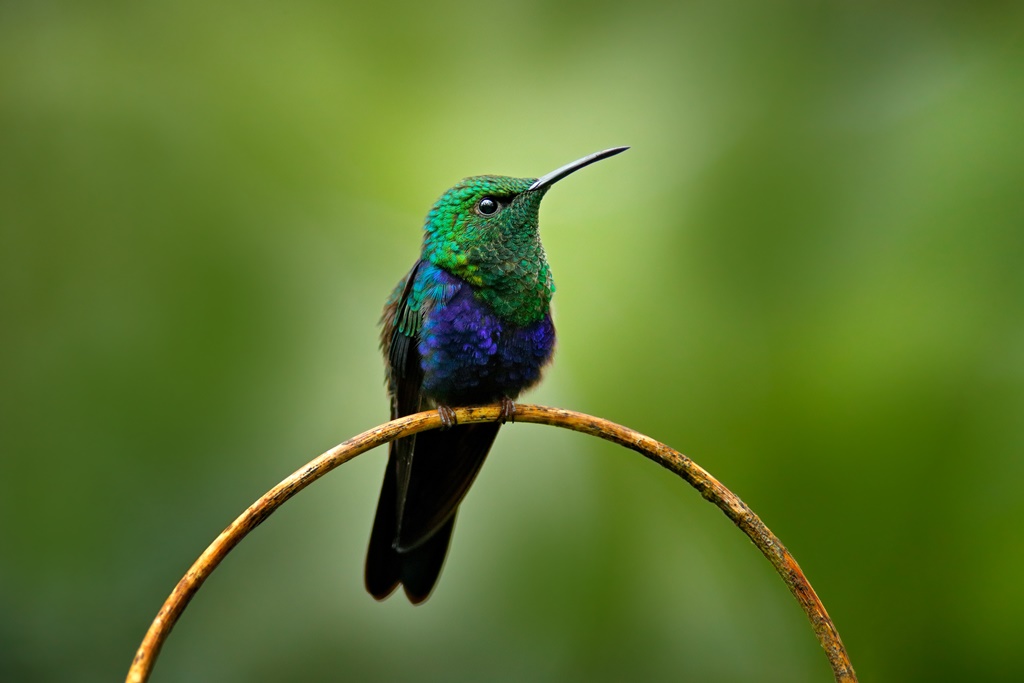 Yacurí National Park was established in 2009. It is situated between two provinces, Loja and Zamora Chinchipe, on the border with Peru. It is a part of the Podocarpus – El Condor Biosphere Reserve. The park embraces moorland, cloud forests as well as various plant species, mountain tapirs and spectacled bears. The most popular attraction is the Yacurí lake system, which was declared by the Ramsar convention an important wetland area in 2012. To get to the Laguna Yacurí, you have to go to  the city of Consapamba. Once there, take the trail called Al Arbolito to see the lake. The trail, for which you need equipment, is 25 km long. Also, from Amaluza you can reach Jimbura parish and then continue to the checkpoint. From there you can hike to Lagunas Negra, a mystical lake often visited by priests and medicine men because of the beneficial properties of the water.

Map of National Parks in Ecuador