World-renowned for its great natural beauty, Croatia is a land filled with many wondrous landscapes. Consequently, there are 8 stunning national parks in Croatia that are spread over 3 regions. The majority of those natural parks are located in Dalmatia (4), Croatia Proper (3) and Istria (1). The oldest and the most famous one is Plitvice Lakes, established in 1949, quickly followed by Paklenica. The newest one is Northern Velebit, which was established in 1999.

Plitvice Lakes and Kornati are inscribed on the UNESCO World Heritage Sites, while Paklenica and Northern Velebit have been encompassed in the Man and the Biosphere Programme (MaB), which has the goal of establishing and enhancing the relationship between people and nature.

Crystal-clear waterfalls surrounded by unspoilt scenery, panoramic views of the mesmerizing archipelagos nearby, diverse flora and fauna – Croatia offers it all! It is by far one of the most ecologically preserved parts of Europe filled with geological and natural wonders, just waiting to be explored.

The following guide presents a list of all national parks in Croatia sorted by each region. You will also find Croatia’s national parks map at the end for easier navigation.

National parks in Croatia by region

Croatia’s a breathtakingly beautiful country, and its national parks are proof of that statement. The largest number of national parks are in Dalmatia, closely followed by Croatia Proper. Istria holds 1 national park, though no less awe-inspiring than the ones mentioned before. The only region without a national park is Slavonia.

National Park Mljet covers approximately one-third of the island. It is known for Malo and Veliko Jezero, an important oceanographic phenomenon. Veliko Jezero is home to the island of St. Mary, which has a romanesque Benedictine monastery on it – a famous landmark for all history and art lovers alike. Since pedestrian paths connect the villages of Pomena and Polače, those who enjoy recreation can choose hiking or cycling. Moreover, canoeing is also an option for those who wish to discover what lies in the island’s sea caves and beaches. You can visit this beautiful national park by frequent boat lines from Dubrovnik and Pelješac. The other option is to choose one of the numerous excursion boats that go from Split, Korčula or Hvar. Because of its refreshing Mediterranean climate, Mljet is the right choice to visit throughout the whole year. 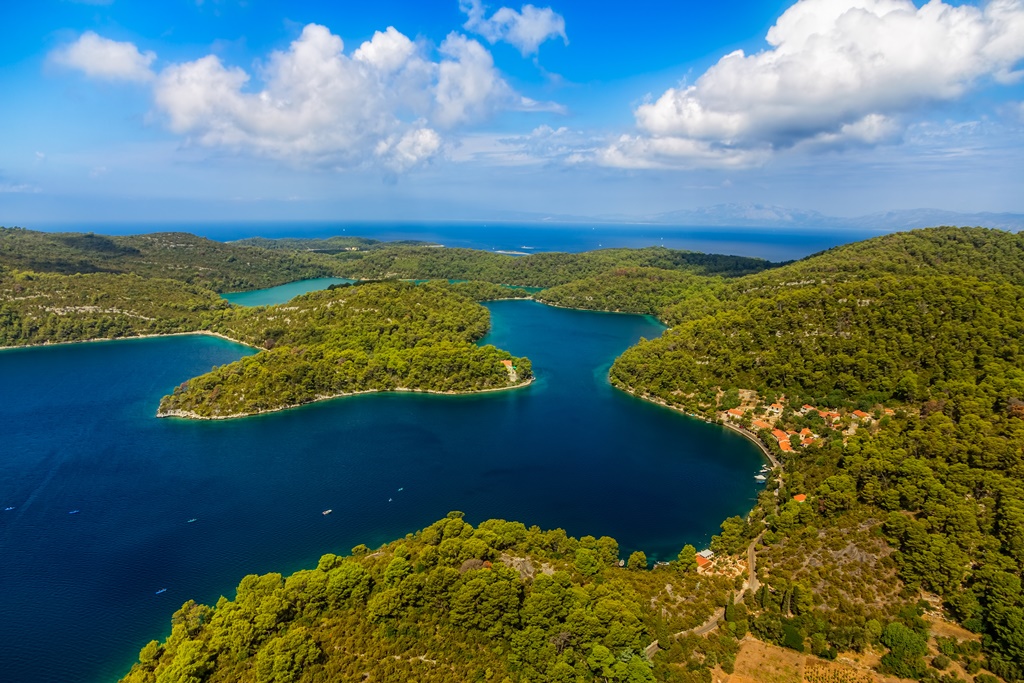 National Park Kornati is a must-see when visiting Croatia. This stunning “island” national park is made up of 89 islands, islets and reefs. That means that only ¼ of the total area is land. Furthermore, the best way to enjoy the gorgeous surroundings and its tranquility is by doing activities such as swimming, snorkeling or diving. However, because of its seclusion, Kornati can only be visited by organized tours. The best way to do so is by finding a boat excursion in the town of Murter. These are arranged daily during the high season. It also falls under the list of 50 most popular Instagram locations in Croatia! So, get ready to take some memorable pictures and share them with the world! 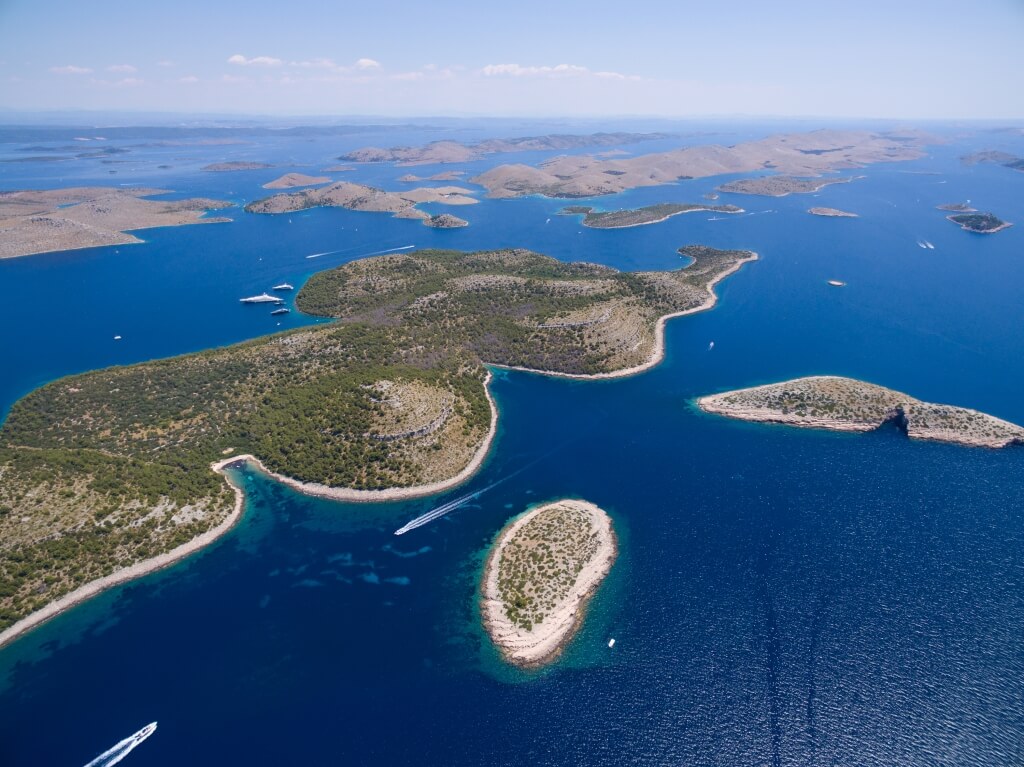 National Park Krka stands out from the rest because of its richness in many plant and animal species. What makes Krka extremely attractive is its huge number of 860 plant varieties and over 20 species of fish, of which half are endemic. Because of this, Krka is considered to be one of the richest rivers in Europe. Before going for a swim in front of the waterfalls, it is highly recommended to visit the Krka Monastery to truly appreciate and get to know the place. Even though Krka is beautiful throughout the year, you might wish to visit in Autumn to see the other, less known side of this famous national park. Most excursion boats to Krka are offered in Šibenik, Split, Zadar or Trogir. If you wish to travel by bus, you can reach the park by travelling to Skradin. 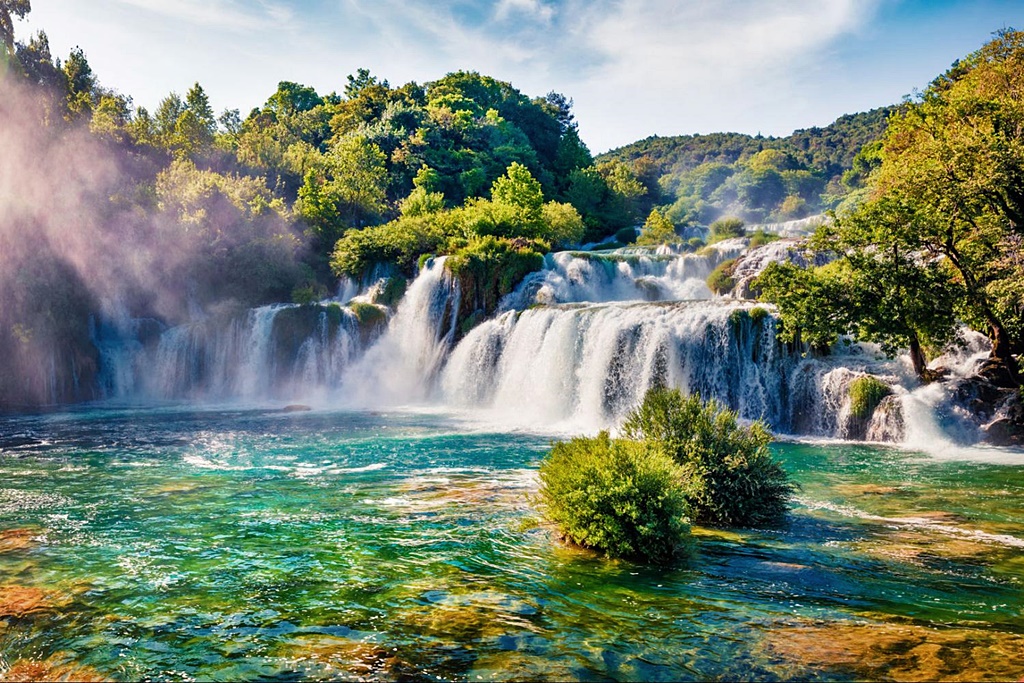 National Park Paklenica, a top choice for the more adventurous ones, is on a par with the most popular climbing centers in Europe due to over 50 years of sport climbing and alpinism tradition. Differing in length and difficulty, the park offers around 400 climbing routes. This national park marks the highest attendance during the “Big Wall Speed Climbing”. That is the international climbing meeting and competition which takes place on May 1. Covering an area of 100 km2, Paklenica has views of impressive mountain peaks, canyons and lush forests. Among the richest in cave decorations are Manita and Vodica caves, which are open to tourists for guided exploration. 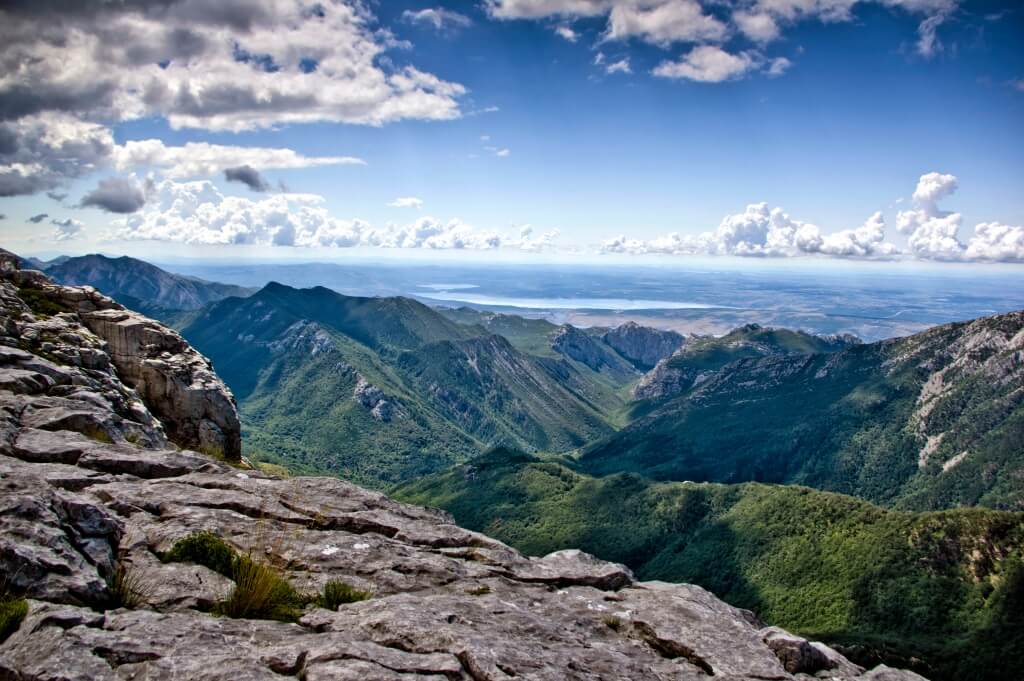 National Park Plitvice Lakes is surely the most popular tourist attraction in Croatia. Plitvice Lakes include 16 larger lakes and several smaller ones. Together they create a delightful lake system of cascading waterfalls that made it to the list of UNESCO Sites in Croatia. Its untouched beauty has enraptured many visitors from Croatia and all over the world. Thanks to its popularity, Plitvice Lakes can be a bit crowded during the summer. So, it might be a good idea to visit it after the season, like in September or October. Meanwhile, this guide covers how to reach this stunning UNESCO-protected national park by bus if you don’t have a car at your disposal. 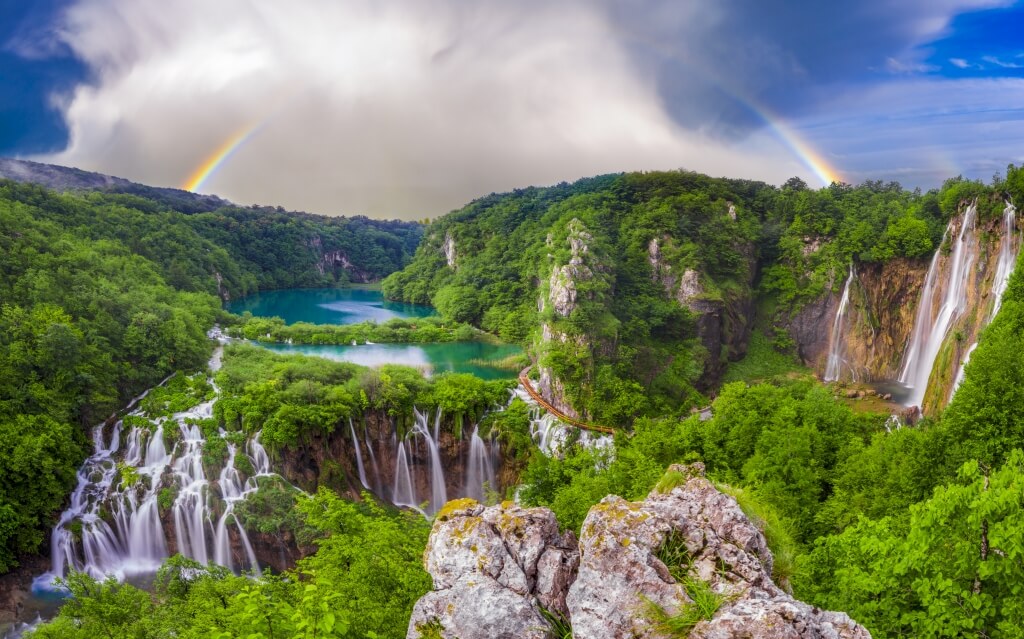 National Park Risnjak got its name from one of the biggest and rarest predators on these lands, the lynx. This national park is well known after Veliki Risnjak, the second tallest mountain peak in Gorski Kotar. Standing proudly at 1528 meters high, the peak offers panoramic views of Kvarner bay, Istria and the Julian Alps in Slovenia. Right under it lies the so-called Wonderful Butterfly Valley (Čudesna Dolina Leptira). This is due to its mesmerizing turquoise Kupa river and the rich flora and fauna surrounding it. Risnjak is a quite visited national park. This is largely because of its proximity to other tourist destinations on the coast such as Opatija and Crikvenica. 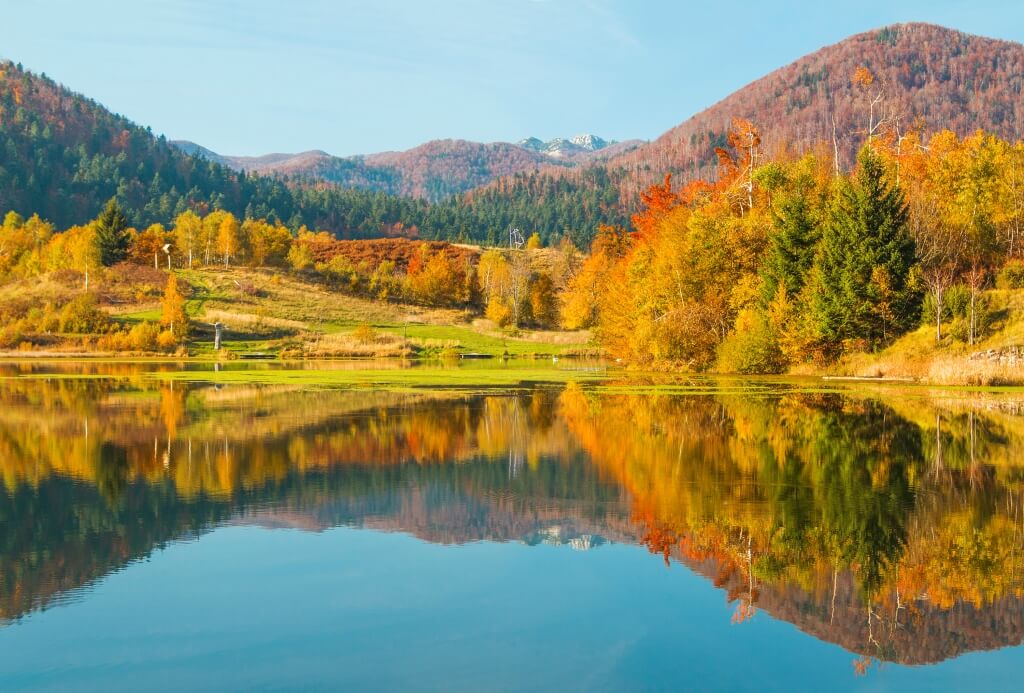 National Park Northern Velebit is famous for its extraordinary karst underground formations, which depict a whole new special world right beneath our feet. On the surface, it is possible to see traces of wolf, bear and lynx presence. Considering how rare lynxes are in the world, it is an utter delight to be able to get the chance to see one in person. Therefore, the main reason to visit this special national park is that this area is still fairly unexplored and its natural features are being discovered day by day. It’s also considered to be one of the 50 best national parks in Europe, along with Plitvice Lakes and Paklenica! 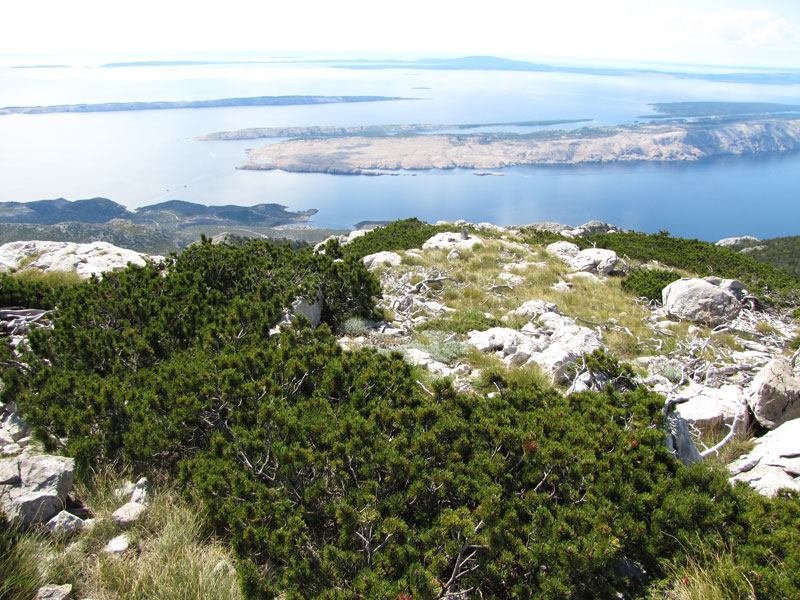 National Park Brijuni consists of Veli and Mali Brijun and other 12 small islands, making it one of Istria’s most beautiful treasures. The most visited complex is the Roman villa in Verige Bay, surrounded by perfectly harmonized flora and fauna. Due to the rich program paired with the natural beauty of Brijuni, it is worth visiting this stunning national park. There are many attractions that offer the opportunity to get to know this hidden gem – take a ride through the safari park, walk in the halls of the archeological museum and exhibition “Tito on Brijuni”, observe Glagolitic monuments and Istrian frescoes in the church of St. German and many more. 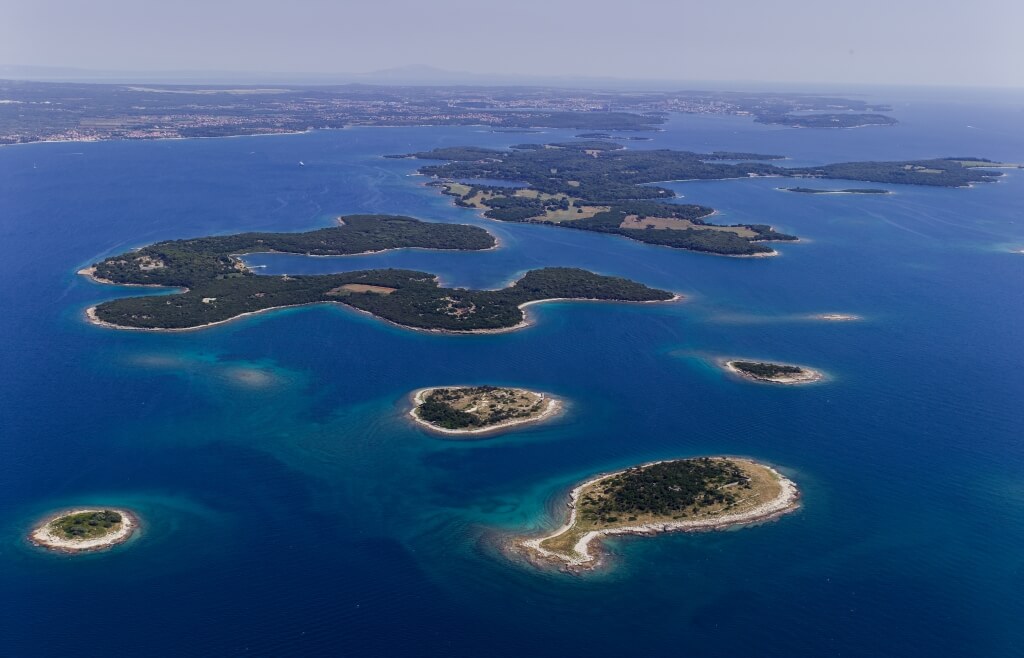 Croatia’s national parks represent the epitome of natural beauty which cover 7.5% or 994 km2 of the country, of which 235 km2 is the sea surface. They are spread over 3 regions across the country. The biggest national park is Plitvice Lakes, covering a territory of 296.9 km2 (114.6 sq mi) and the smallest one is Mljet, with a total area of 5.4 km2 (2.1 sq mi). The following list includes all 8 national parks in Croatia sorted by size.

Entrance to national parks in Croatia

Even though the price varies from one national park to the other, they all are considered to be quite pricey, especially during the high season. In order to save money and avoid long queues, it’s recommended to purchase your tickets online in advance. As well as that, many of them also charge admission fees for certain attractions in the park, so it’s best to check out their official websites for more information. There, you can find out more about all their plans and programs and choose the one that best suits your needs and wishes.

How many national parks are in Croatia?

There are currently 8 national parks in Croatia.

What are the oldest national parks in Croatia?

The oldest national parks in Croatia are Plitvice Lakes (1949) and Paklenica (1949).

What is the newest national park in Croatia?

Northern Velebit was declared a national park in 1999, making it the newest one yet.

What is the most dangerous national park in Croatia?

None of the mentioned national parks had any dangerous or fatal encounters. In order for it to remain so, be cautious when taking pictures near viewpoints (it’s very slippery!) and don’t provoke animal wildlife.

Which regions of Croatia don’t have national parks?

The only region that doesn’t have a national park is Slavonia.

Which region of Croatia has the most national parks?

Dalmatia region has the most national parks for now (4).