The sunny city on the south of Croatia is among the most visited tourist destinations, not only in Croatia, but in entire Europe as well. Amazing architecture, ancient Old Town, clear blue sea and many more exciting things expect you in the “Pearl of Adriatic”. We have prepared a detailed guide to make your vacation in Dubrovnik easier with some insider tips which you won’t find everywhere. So, without further waiting, let’s see what Dubrovnik has to offer!

During your stay in Dubrovnik, make sure you don’t miss some of the main cultural sights in the city centre:

City Walls – Once defensive stone walls which served as a protection from invaders, today are one of the most iconic monuments of Dubrovnik. City walls were built during Middle Ages and they reach up to 25 metres of height and they are almost 2 kilometres long. The walls have 5 gates: Gate of Ploce, Gate of Pile, Gate of Buza and two gates in city harbour, Gate of Ponte and Fishmarket Gate. The most important key to the defense of the city were the forts built within the walls such as the famous Minceta Tower, Fort Bokar, St. John Fortress and Revelin Fortress. You can walk around the city walls but you will have to pay the entrance fee (150kn for adults, 50kn for children and students). 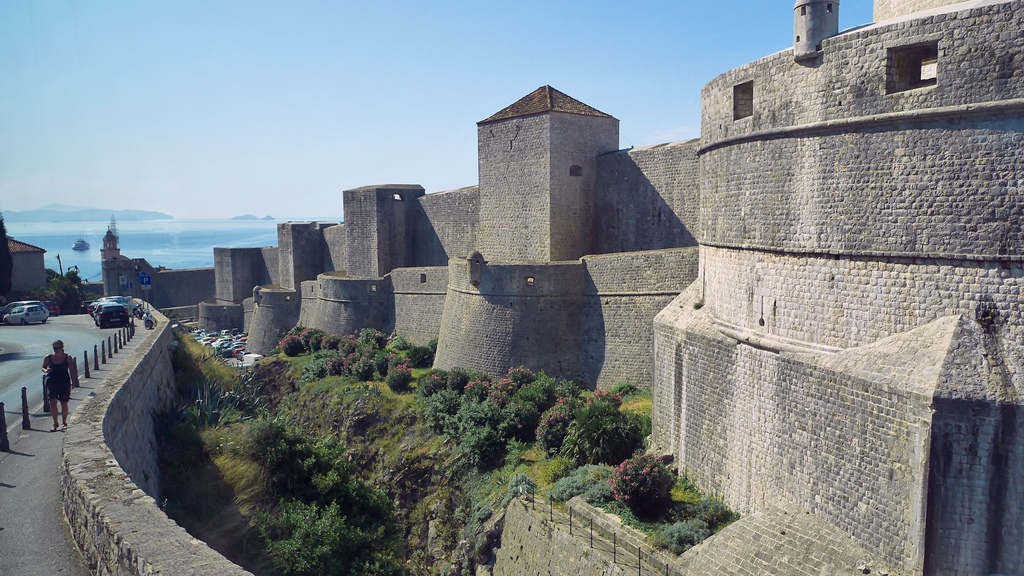 Stradun – Stradun is the main street in the Old Town of Dubrovnik and it connects Gate of Pile and Gate of Ploce. Its name comes from old Venetian word for “big street”, but not many know that locals also like to call the street Placa. Stradun is 300 metres long and there are many monuments you can see while walking along the street, such as Large and Small Onofrio Fountain, St. Saviour Church, Sponza Palace and St. Blaise’s Church (the patron saint of Dubrovnik). Also, Stradun is one of the best places to celebrate New Year’s Eve, not only in Croatia, but in Europe as well.

Cathedral of the Assumption of the Virgin Mary – The cathedral was finished in 1713 and it was mostly influenced by Baroque style but the original church dates back to the 12 century and its construction was partially paid by English king Richard the Lion Heart . Nowadays the cathedral is the seat of the Diocese of Dubrovnik. 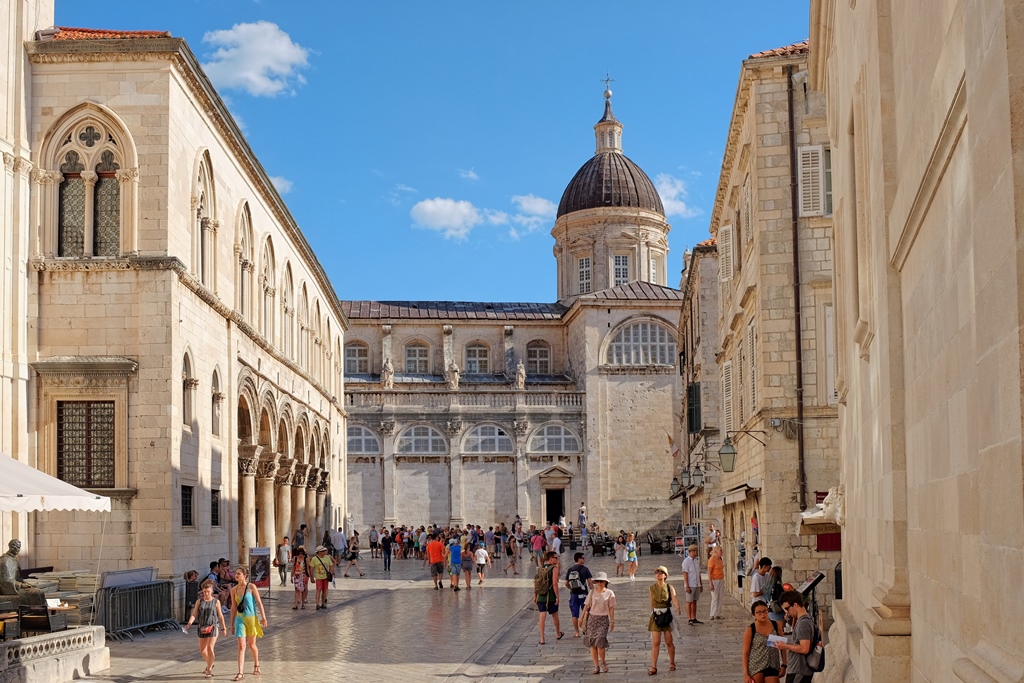 Rector’s Palace – One of the most significant palaces in Dubrovnik along with Sponza Palace. The palace is built in Gothic style with Baroque and Renaissance elements and today it houses Cultural-history museum of Dubrovnik. The entrance fee is 80kn (25kn for students).

Fort Lovrijenac (St. Lawrence Fortress) – Also known as the “Gibraltar of Dubrovnik”, Fort Lovrijenac is a detached fort located outside the city walls. The fort is 37 metres high and it was the main fort for the defense of the city. Even the outer walls are 12m thick while the ones facing the city walls are only 60 cm thick. The fans of Game of Thrones might recognize Fort Lovrijenac from the scenes of King Joffrey’s birthday celebration. 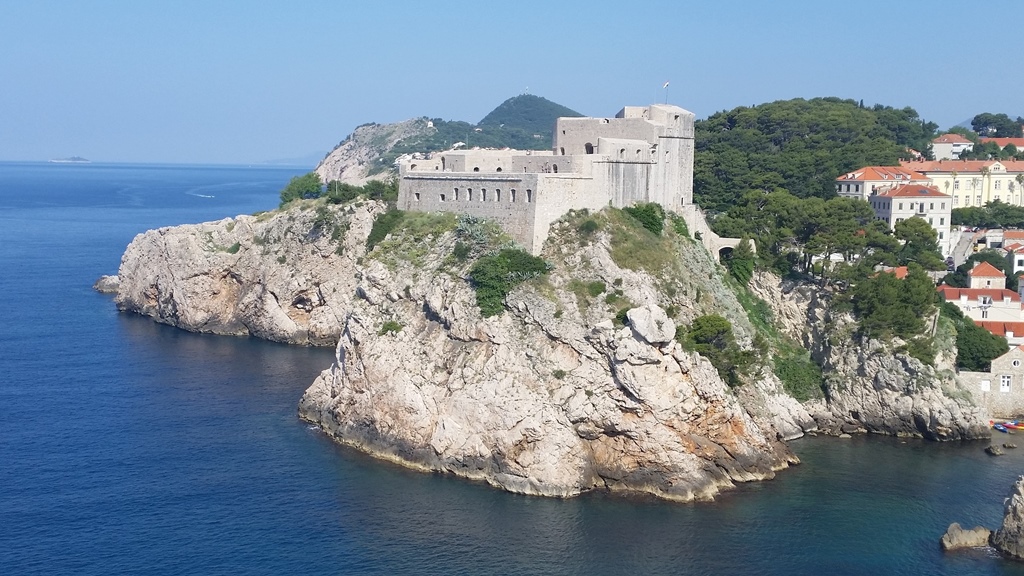 Public transportation, getting around in Dubrovnik

Public buses in Dubrovnik are operated by Libertas Dubrovnik company and there are total of 13 city lines and suburban lines to towns like Cavtat, Ston and Orebic → see here more information about bus lines, bus tickets and timetables

Banje Beach – the main city beach, very popular among tourists due to its vicinity to the city centre. The beach has numerous sunbeds available for rent and in the night the beach turns into a night club.

Copacabana Beach – Copacabana Beach is located on Lapad peninsula  (15-minute drive from Old Town)  and it’s a pebble beach suitable for families with children. Visitors usually rent a kayak or jet-ski and there is even a possibility of parasailing which is definitely a unique experience. It should be noted that Copacabana is fully equipped when it comes to disabled people and there is also a special part of the beach with aids for disabled.

Lapad Bay – Lapad Bay is a group of several tiny beaches along the waterfront. First one is Uvala, followed by Adriatic (concrete beach), Vis and Splendid (tiny sand beach). Entire Bay offers a great number of bars and restaurants. 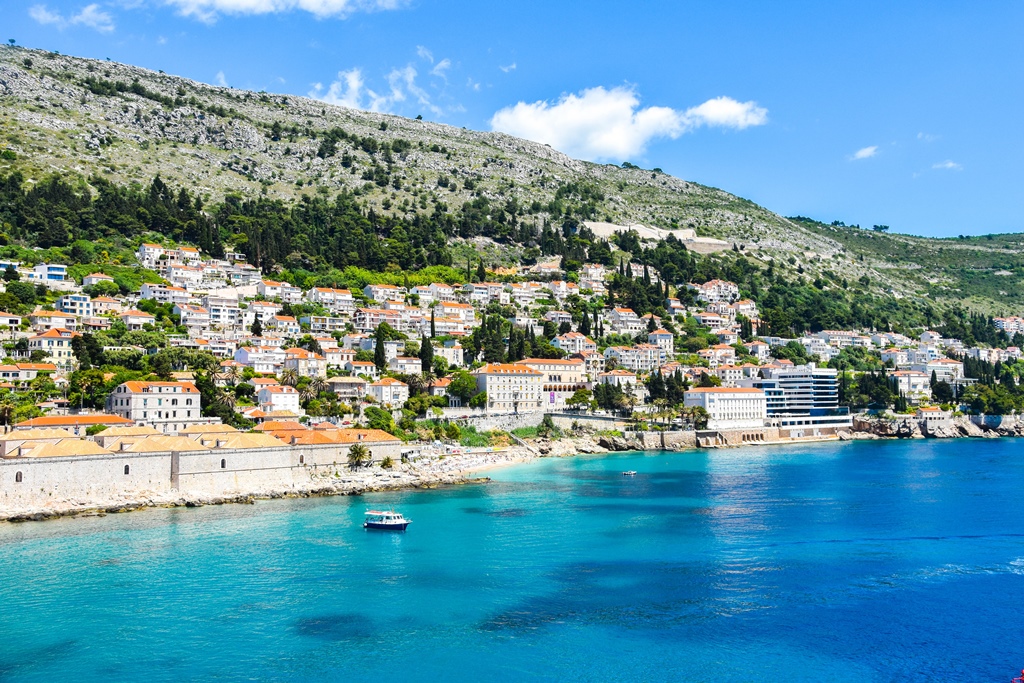 Game of Thrones tour – As you may know, in Dubrovnik was filmed the worldwide popular TV show Game of Thrones and it doubled as King’s Landing. Due to the popularity of the show many people want to visit Dubrovnik to get the feeling of reliving some of the most notable scenes from the series (such as the Walk of Atonement which was filmed in the Old Town). The city offers numerous Game of Thrones tours which will take you through the main parts of King’s Landing such as Reed Keep, Sept of Baelor and Blackwater Bay. 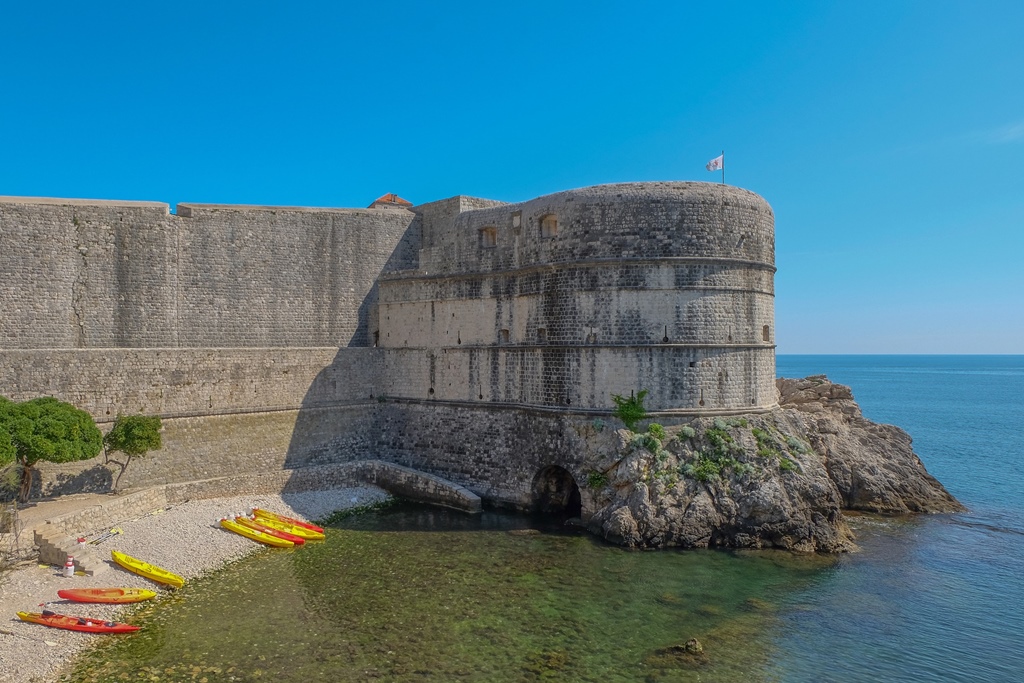 Kayaking – Kayaking is a very popular activity in Dubrovnik during summer months. The kayaking tour usually starts in the small bay beneath Fort Lovrijenac and it also includes exploring caves of Island Lokrum where you will stop for a break for snacks and/or snorkeling.

Cable Car to Mount Srdj – Not going to Mount Srdj while visiting Dubrovnik is like going to Rome and skipping Colosseum. Mount Srdj is the mountain overlooking the city of Dubrovnik and it can be accessed either by car or by cable car directly from the city centre. It is an amazing experience and the view from the top is breathtaking. 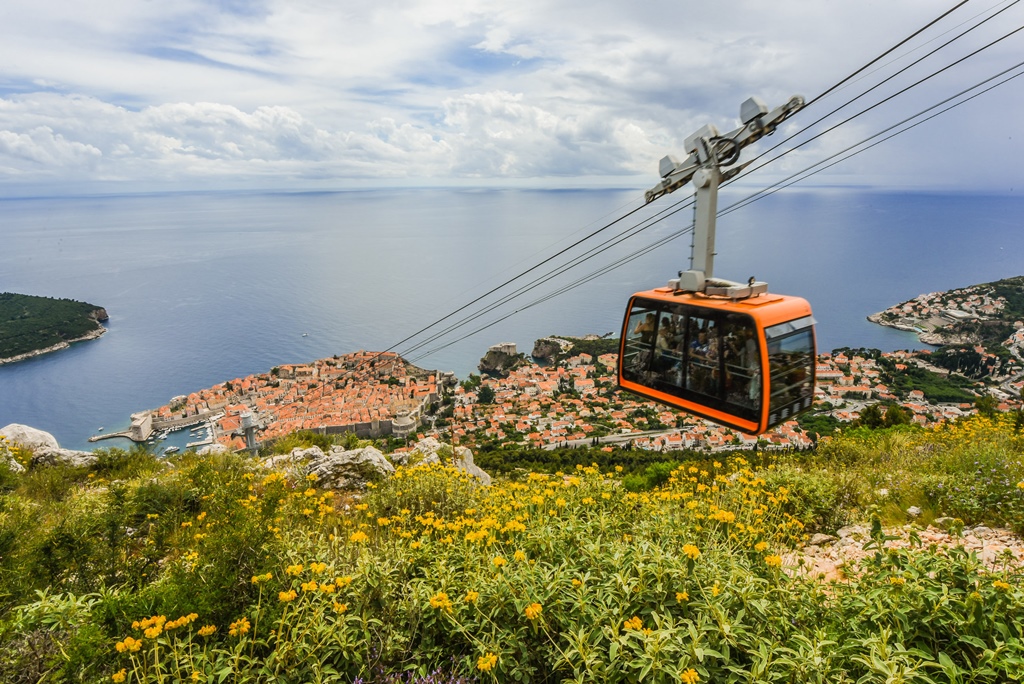 Buggy Safari Ride –  After you’ve taken cable car to Mount Srdj, it would a shame to miss driving a buggy. The ride is a fun experience for all generations and it’s a great opportunity to enjoy nature and forests of Croatian countryside.

Day trips – Dubrovnik is an excellent starting point for many day trips, such as visit to Mostar in Bosnia and Herzegovina or to Kotor and Budva in Montenegro. Not to mention that you must visit at least one of the nearby islands such as Korcula and Mljet (and National park Mljet). → for more information check here top 10 day trips from Dubrovnik

If you need euros you can use Euronet ATMs in Dubrovnik from which you can withdraw euros or you can exchange money in local exchange offices. The majority of Croatian banks are a part of larger banking groups such as UniCredit, Intesa San Paolo, so if you have a credit card in a bank which is a part of  some of these groups, you can withdraw money on ATMs in Dubrovnik without paying additional commission fee.

NOTE: Some machines may ask you whether you want to be charged in kuna or your country’s currency. In that case always pick kuna to get lower exchange rates.

Since Dubrovnik is relatively small city and the city centre is mostly pedestrian, finding a parking spot can be a real challenge. And if you actually manage to find one, it may cost you up to 10€ per hour (depending on the zone). Parking lots in Dubrovnik are divided into 5 zones (zone 0 to 5; zone 0 being the most expensive one and the closest to the Old Town).  In case you park your vehicle where you are not supposed to, your car will be towed away by “pauk” and the fine will cost you 500-800kn.

When it comes to partying, Dubrovnik is more of a laid back city and it has more bars than night clubs. Make sure to visit Banje Beach Restaurant which is a seafood restaurant during the day and in the evening it transforms into a cocktail bar. The most unusual bar in Dubrovnik (probably in entire Croatia too) is definitely Cave Bar More in Lapad district. The bar is part of Hotel More and it is built inside of a real cave. It is split into three levels inside the cave or you can sit outside right next to sea. Either way, it is a unique experience! Club Lazareti offers a variety of live concerts and parties for alternative scene and those who prefer less commercial music genres. The club consists of three floors: inner, terrace and the beach floor which gives a great view on the city port. Revelin Culture Club is the most popular club in the city and it is built inside of Revelin Fortress (one of the four city walls fortresses). The club interior is a perfect example of of mix between old and modern – the walls inside are intact but the dance floor and seats have a modern design. Some of the worldwide known DJs like Fedde Le Grand and Paul Van Dyk have performed in Revelin. 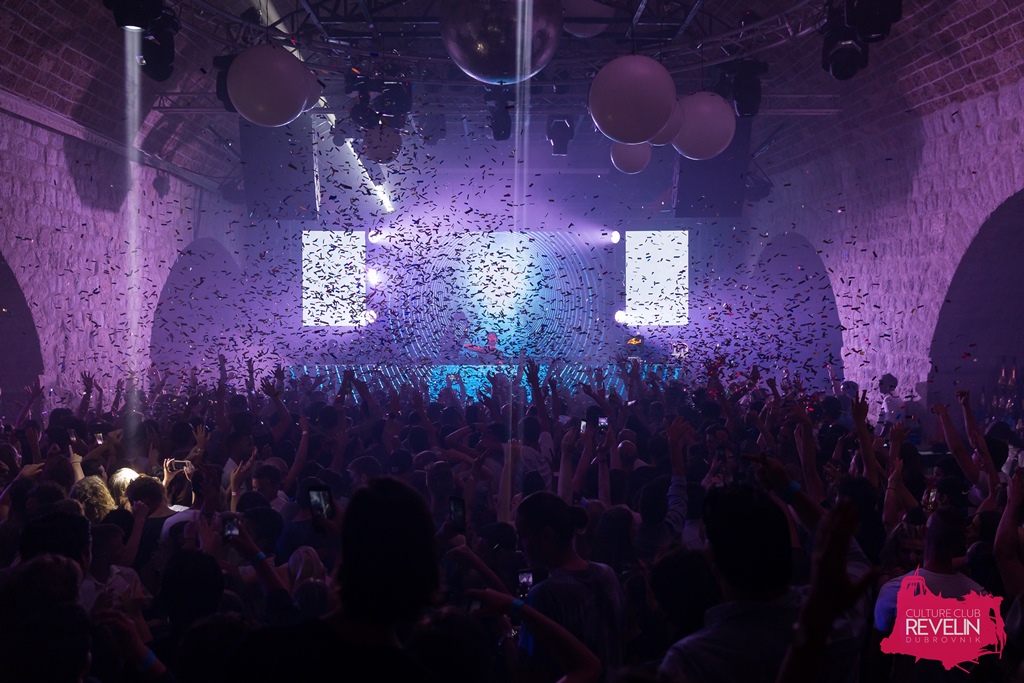 If you looking for large city malls and shopping spree in Dubrovnik, unfortunately there are not many options for that but you can visit the two smaller malls in Gruz and Lapad districts – DOC and Downtown. The majority of smaller shops are located in the Old Town and there is even a mini-mall called Dubrovnik Shopping Minčeta. For grocery shopping there are Pemo and Tommy supermarkets or Lidl supermarket in Čibača (a settlement 8km from Dubrovnik city centre). 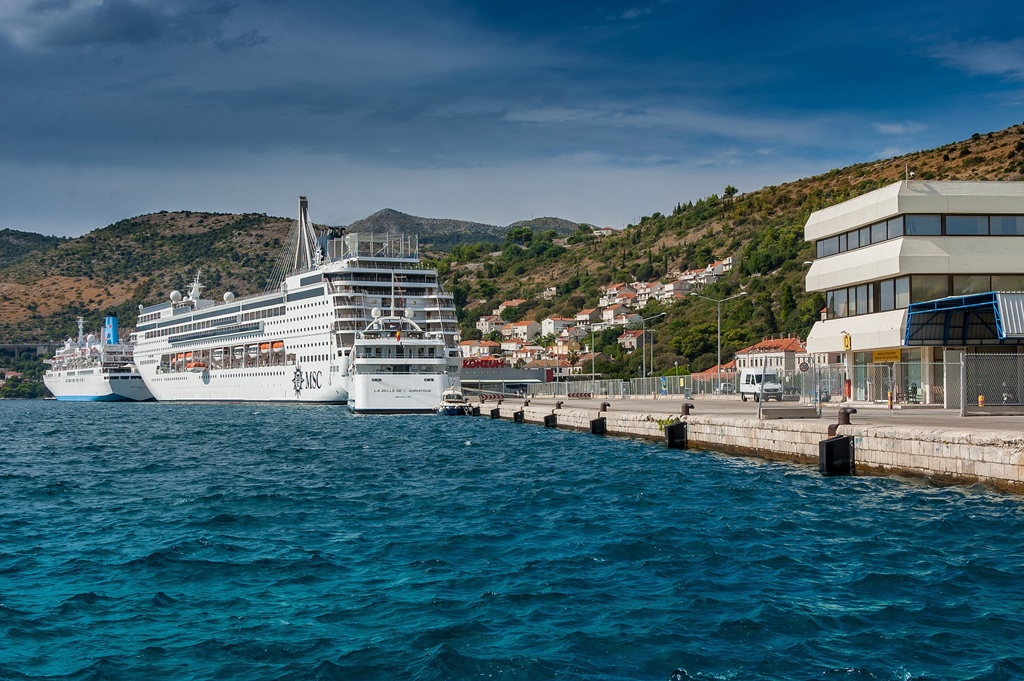 Below you can see a map with all the places mentioned in the guide. You can also filter the map by unselecting those sections you do not need.