Capital of the Veneto region, Venice is a unique city known for its canals and churches which, together with breathtaking scenery, make it one of the most romantic destinations in Europe. Numerous museums and art galleries are all worth visiting during your stay, since the city is an authentic cradle of Italian history and culture. The city is small, compact and perfect to explore within just a few days, so without further hesitation, check out what this Italian pearl has to offer! 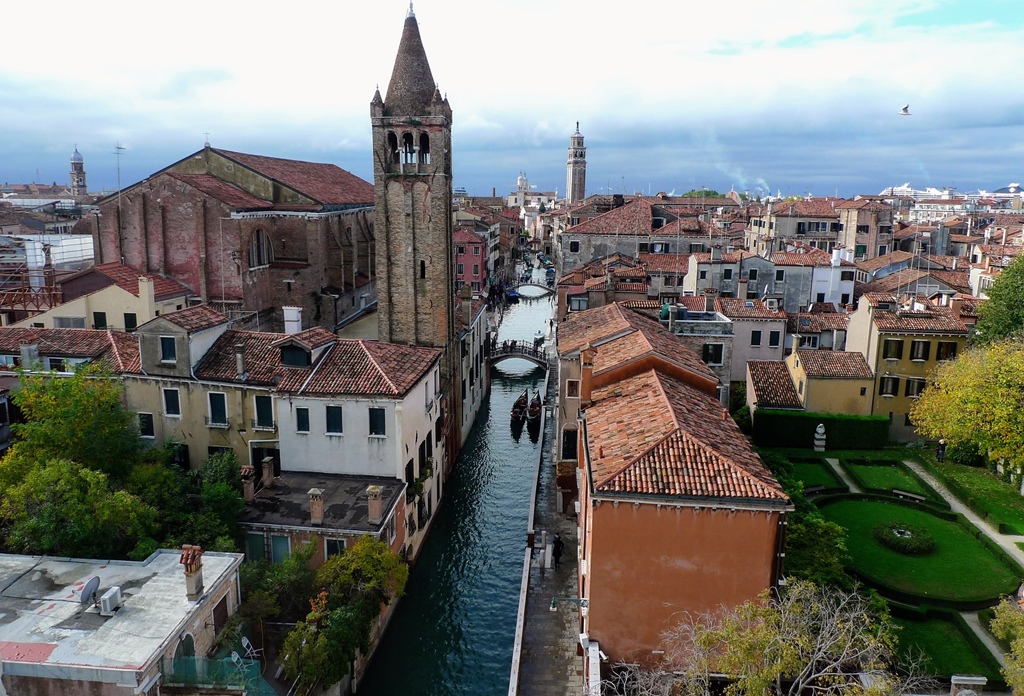 St. Mark’s Basilica – Without doubt Venice’s best-known church, St. Mark’s Basilica was originally the Doge’s private chapel decorated with Byzantine ornaments brought to the city after the fall of Constantinople. Gold mosaics cover the domes and walls set a distinctive tone to its interior, but you will also find treasures from other periods, especially those designed by Titian and Tintoretto, names spread all over the city. Take your time to see the magnificent 12th-century golden altarpiece, the Pala d’Oro, and the gold reliquaries and icons in the Treasury.

St. Mark’s Square – Piazza San Marco as Italians know it is the city’s largest square and the place where everybody gathers, strolls, drinks coffee, meets friends or tour guides or simply takes a break from all the canals and bridges. Thanks to its architecture on three sides, the square seems almost intimate despite all the crowds. For overviews of this busy piazza, you can go to its top or to the top of the Torre dell’Orologio, where a pair of “Moors” strikes the hour. 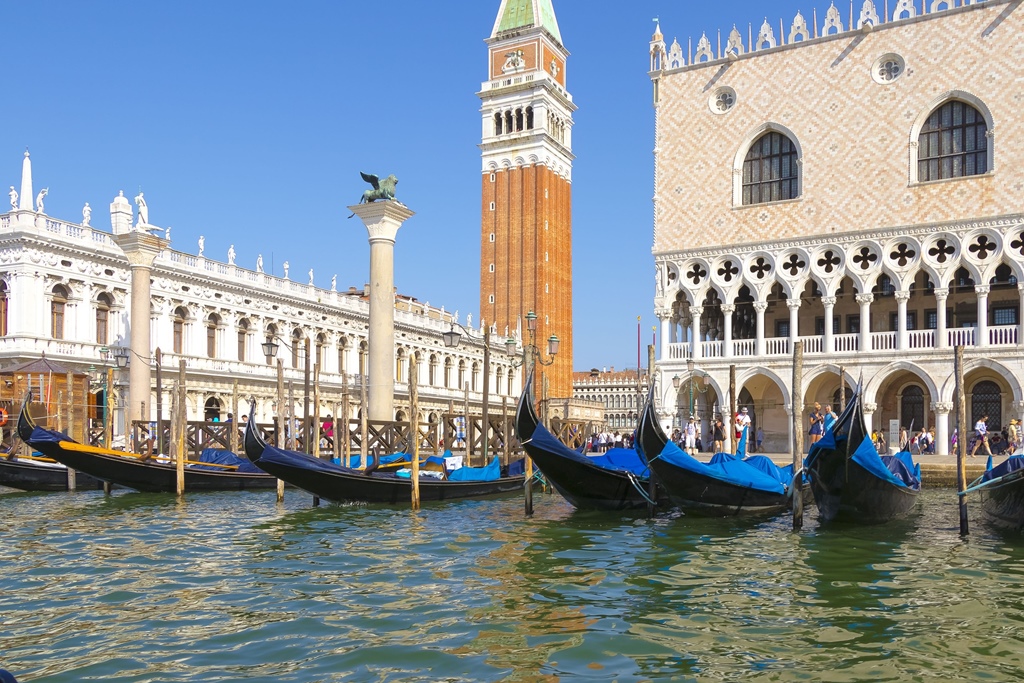 Grand Canal – The Grand Canal is the main boulevard through the city, connecting Piazza San Marco, Rialto Bridge and arrival points from the mainland. Although only four bridges cross its total length, stripped-down gondolas called traghetti travel back and forth at several points between those bridges. The Grand Canal was once the address to anyone who mattered in Venice, so palaces of all leading families open their Venetian Gothic and Early Renaissance facades towards the water. So, don’t think twice and have a trip along the canal by vaporetto, which is not only to best way to see Venice, but also one of the most romantic things to do in Venice at night.

Rialto Bridge and San Polo – This charming bridge marks the spot of the island’s first settlement, called Rivus Altus. Dating back to 1588, this stone arch supports two busy streets and many shops. Apart from being a crossing point midway along the canal, it is also a favourite point for tourists taking or posing for photos, as well as watching the boats passing under the bridge. There is the Church of San Bartolomeo nearby, with an excellent altarpiece, the Martyrdom of St. Bartholomew, while on the opposite end of Rialto Bridge is the busy food market, occupied both by locals and visitors. 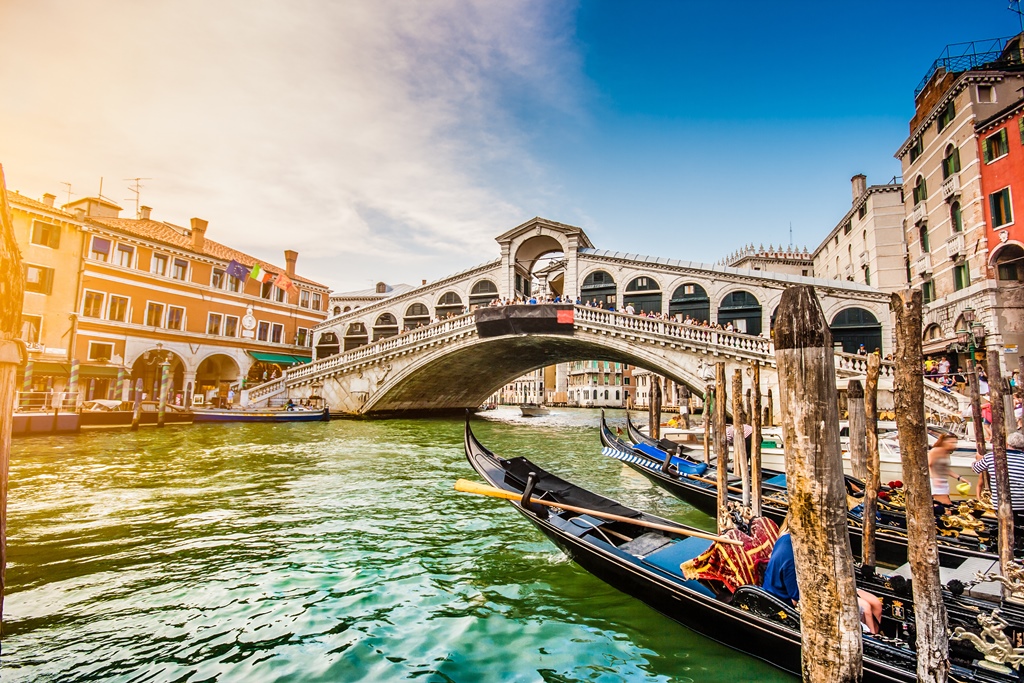 Doge’s Palace – The size and architecture of the Doge’s Palace has been impressing visitors of Venice ever since the ancient times. Once people enter the Palace, their impression gets even stronger when they see the Porta della Carta, a perfect example of Venetian Gothic at its height or when they ascend the Scala dei Giganti and Scala d’Oro, only to step into what many consider the palace’s most beautiful chamber, Sala del Collegio. Lines for admission to this Venetian landmark are often long, but you can avoid these, and see sections of the palace not open to general visitors, with a Skip the Line: Doge’s Palace Ticket and Tour.

Murano and Burano – A trip to Venice wouldn’t be complete without hopping aboard a vaporetto for a ride across the lagoon to Murano, a home to the city’s fabled glass workers. The canal sides today are lined by glass showrooms and studios, displaying everything from cheap trinkets to exquisite works of art. Inside the 17th-century Palazzo Giustinian is the Glass Museum, with one of the largest and most important collections of Venetian glass from the time of the Romans to the modern age. Next island, Burano, is a fishing village of breathtakingly painted houses, known for its lace making. The Scuola dei Merletti and its small museum will help you distinguish the real thing from the cheap imports you’ll find in shops. 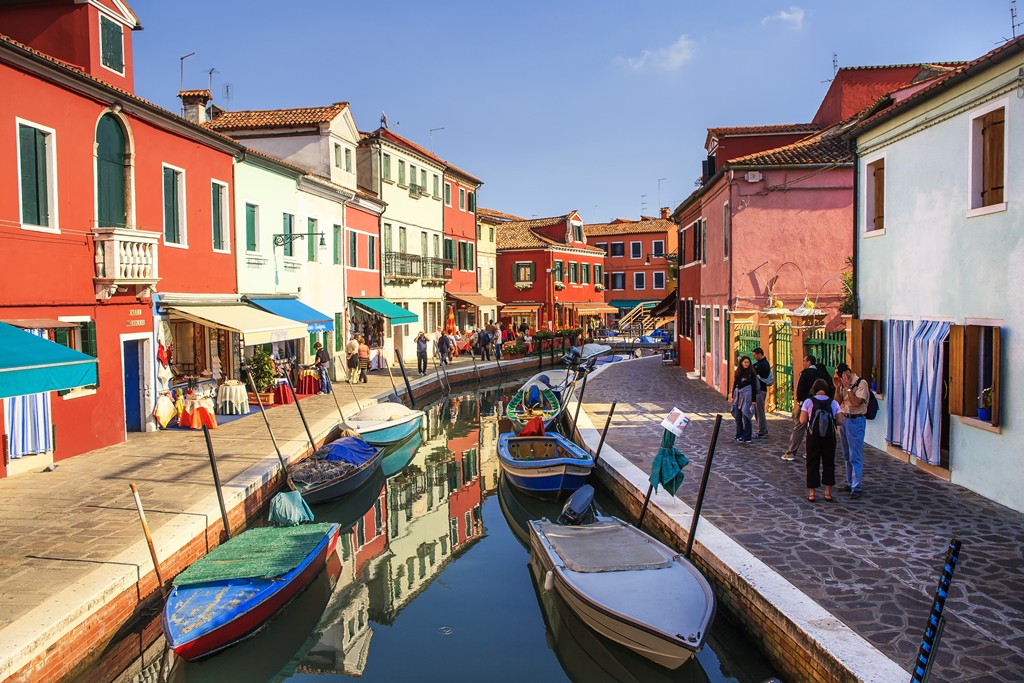 Public buses in Venice are operated by ACTV and ATVO buses, which leave from Piazzale Roma for the Mainland, Mestre and its city centre, the Venice Marco Polo airport, and the Treviso Canova airport. ACTV also operates Venice’s water transport. See more information on the public transportation in Venice.

Venice Lido Beach – It is the closest beach of the city, only a 20min-vaporetto-ride away. You can rent a couple of tanning beds and a beach umbrella, or just lay and relax on your beach towel for free.

Malamocco Beach – It is situated on Venice Lido island, and if you want a quieter place to enjoy some sun without much crowd around, this is the beach for you. Once you get off at Venice Lido Beach, take bus line A, you’ll be there in less than 10 min.

Punta Sabbioni Beach – This beach is a bit further away, so if you don’t mind driving in a vaporetto line 12 for an hour and a half, visit the West Coast of Cavallino-Treporti and enjoy.

Lido di Jesolo Beach – One of the biggest beaches in Venice is also the best party beach of the area, so head there if you’re looking for fun and spend your time in numerous clubs and bars. The fastest way to reach this place is going to Piazzale Roma and take the ATVO bus to Jesolo (50 minutes). 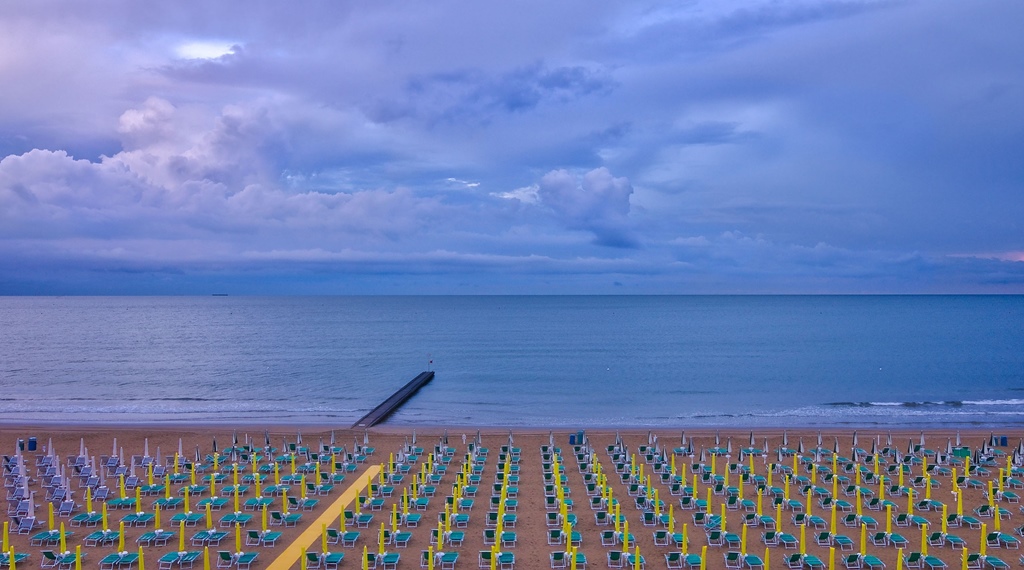 Gondola tour – As you probably already know, no trip to Venice is complete without a ride along the city’s picturesque canals in an iconic gondola. Maximum of 6 people fit in one gondola, and the prices depend on the season, but very often you can negotiate with the crooner. You can start your tour at one of many booking points across the Old Town in Venice.

Panorama city view – Climb Venice’s tallest building, the Campanile (99m), built between 888 and 912, and enjoy the fantastic view of the city, taking in the Lido, the whole lagoon and the Dolomites in the distance. 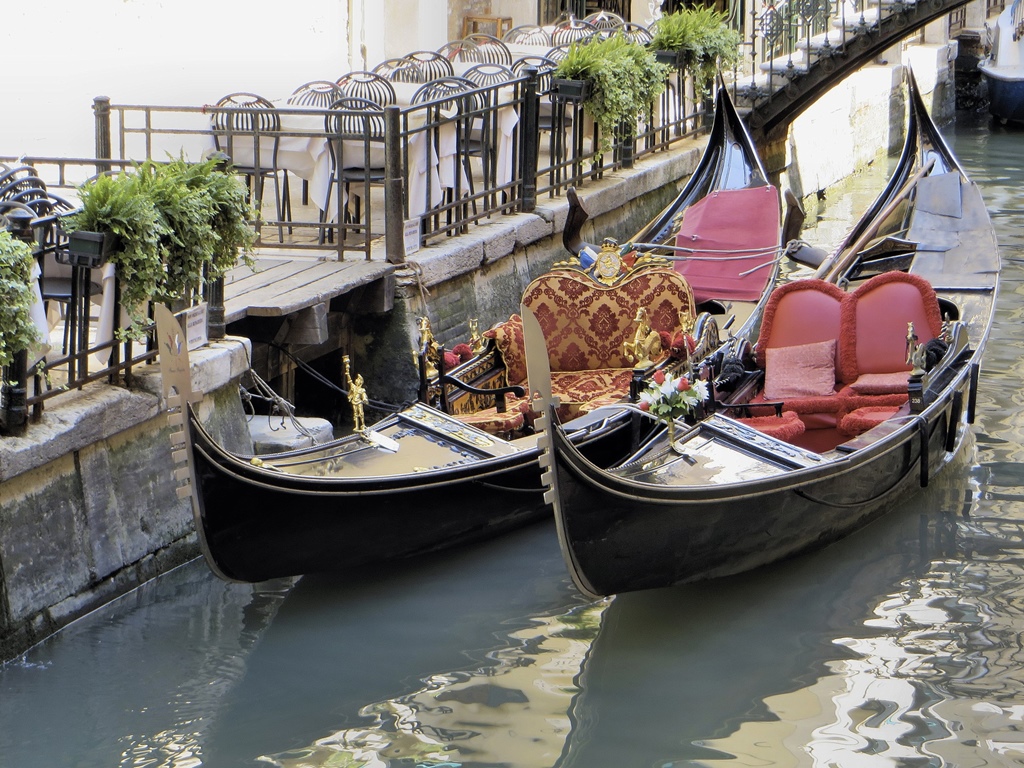 ATMs, or ‘bancomat’, are all over Venice, so in case you need to withdraw money. Although you will be charged a fee for international transactions, it is one of the least expensive options for acquiring foreign currency.

Currency exchange offices and banks are the most expensive option. These businesses will often take 10 cents on more onto the cost of each euro you buy.

NOTE: There are many currency exchange desks in Venice. The rates charged do vary by location.

Although Venice is a city of pedestrians and boats, some people still go there by car and then have trouble finding a parking spot for their vehicle. So, don’t repeat their mistake and leave your car at the edge of the historic center, on Tronchetto (an artificial island for parking) or at the Piazzale Roma (last stop for cars, taxis and buses). You can also park in Marittima, the larger of Venice’s two main cruise basins. Whichever you choose, don’t except to pay less than a daily fee of €21.

Although many people believe that Venice goes to bed at 09:00 P.M., they are wrong (we, of course, refer to the area outside the Piazza San Marco). But, if you know where to look, you’ll find great evening entertainment in this lagoon city. Consider visiting Al Mercà or Bancogiro situated north-west of the Rialto Bridge, or a student-oriented place Campo Santa Margherita (known as Il Campo among the locals), where the atmosphere starts to heat up early in the evening and carries on into the night at bars like Caffè Rosso and Orange. For a bit more mature clientele there are bars such as El Sbarlefo and Estro and Osteria ai Pugni. Nearby you can visit the lively Venice Jazz Club, which plays live performances almost every evening. And for those of you dying to dance, check out the Area/Beast Club or TAG in Mestre. 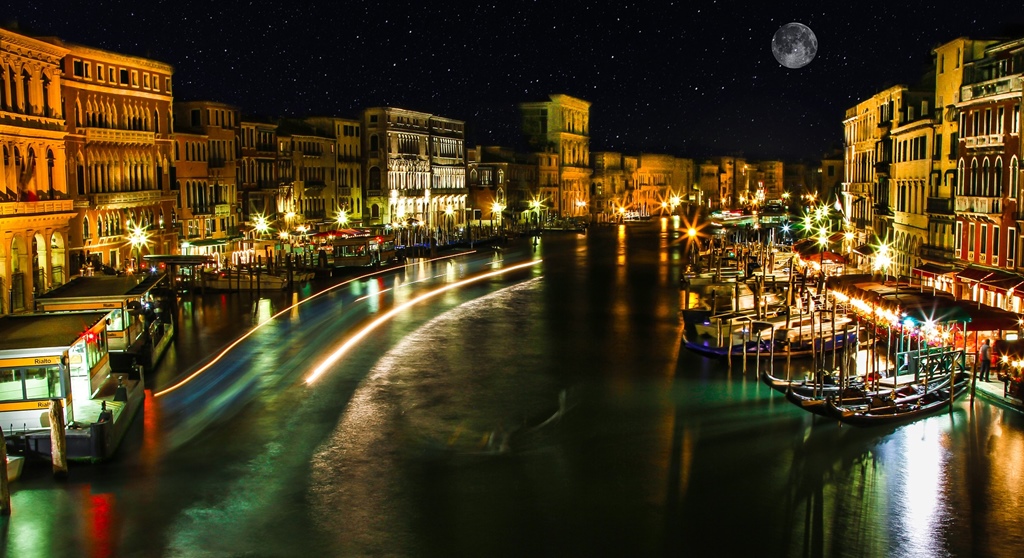 As an important trading point for centuries, Venice today has it all, from boutiques presenting Italy’s most luxurious brands to family-owned shops passing art through generations. The city offers one of the world’s best shopping experiences, whether you need contemporary fashion pieces, antique stuff or unique trip souvenirs. The area around San Marco and Rialto is a real paradise for all shoppers, since it is a home to Venice’s largest concentration of famed attractions and international retailers, so make sure to visit two best shops there, Gioielleria Eredi Jovon and T Fondaco Dei Tedeschi. A world-class shopping awaits in Le Mercerie, made up of a series of streets between the Ponte di Rialto bridge and Piazza San Marco, where you can shop at Louis Vuitton, Chanel and Swarovski, Gucci, etc. If you’re seeking textiles and crafts, visit the San Samuele area with high concentration of galleries, craft shops and unique boutiques. 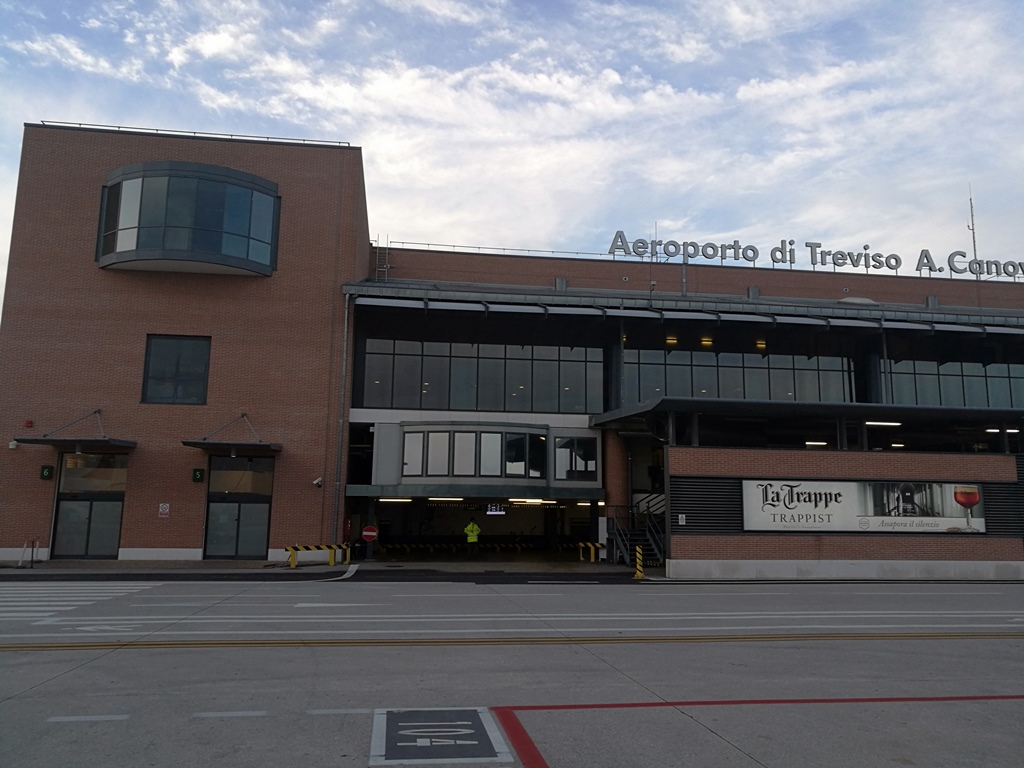 In the map below you can find places mentioned in the guide. The map can be filtered by unselecting those sections which you do not need: