Historic yet modern, original yet multicultural, bureaucratic yet surprising… these are only some of the words describing Belgium’s breathtaking capital. With art nouveau facades and concrete buildings, the Grand Place as one of the world’s most beautiful squares and charming medieval core, Brussels is a must see for everyone who calls himself a real traveller. Often referred to as the ‘capital of Europe’, the city located in the valley of the Senne will definitely win you over, whether for its sights, cuisine, the fact that you’re in one of Europe’s biggest melting pots, or something else, so make sure to follow our guide for the best time in this fantastic place!

Grand Place – The city’s main plaza, situated right in the heart of Brusells, stands for one of the best preserved in Europe. It is characterized by unique architecture of elegant Gildehuizen (guild houses) with their splendid gables, pilasters and balustrades, rich gold decoration and ornately carved stonework. Most of these houses were built at the end of the 17th century in the Baroque style, with some Flemish influences though. However, the Grand Place was first established in the 11th century and soon became the political and economic center of the city. The most recognizable building on the square is the Hôtel de Ville (Town Hall), built in 1402. 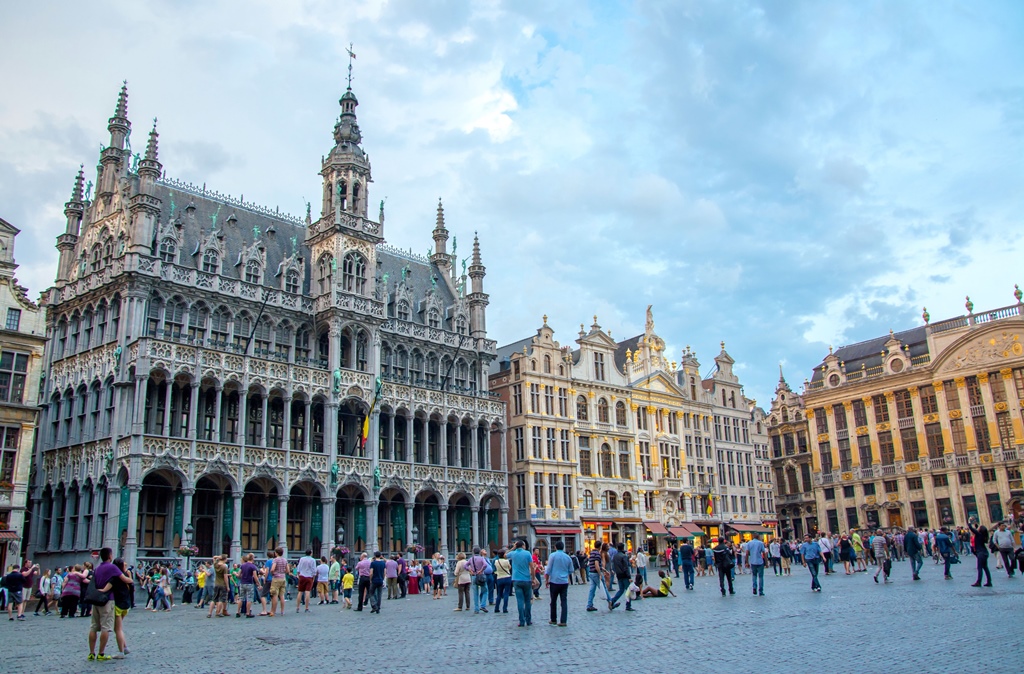 Place Royale (Koningsplein) – This is the favorite attraction among tourists when it comes to selfies and photographs. The most important building on the square is used by the Belgian royals as an official residence, and a place to see a ceremonial Changing of the Guard which takes place every day at 02:30 pm. The palace is surrounded by an ensemble of cultural building boasting Neoclassical facades, with the Palais des Académies, home of the Royal Academy of Sciences and once the residence of the Crown Prince of Orange, and the Palais des Beaux-Arts (Paleis voor Schone Kunste) on the west part of the plaza.

Saint-Michel Cathedral (Sint-Michiels Kathedraal) – This Gothic church dedicated to St. Michael and St. Gudula was founded in 1255, but only completed in the 15th century. The impressive facade rises majestically above a broad flight of steps and is crowned with twin towers designed by Jan van Ruysbroeck. It’s a place where you can see the finest examples depicting Charles V and Isabella of Portugal and the Hungarian royal pair Louis II and Mary, followed by the Chapel of the Holy Sacrament where the window illustrates the story of the Miracle of the Host.

Manneken Pis – Probably Brussels’ best-known landmark, the Manneken Pis is usually besieged by tourists. Not much is known about the origin of the figure of a little boy urinating, except that he can be traced back to at least 1388, which is why he is popularly referred to as ‘the oldest citizen of Brussels’. However, the Manneken is surrounded by various legends, and according to one, it commemorates the son of a count who succumbed to a pressing urde while participating in a procession. The statue we can see nowadays was made in 1619 by Jérôme Duquesnoy the Elder and has been stolen on several occasions, yet has always been successfully found. 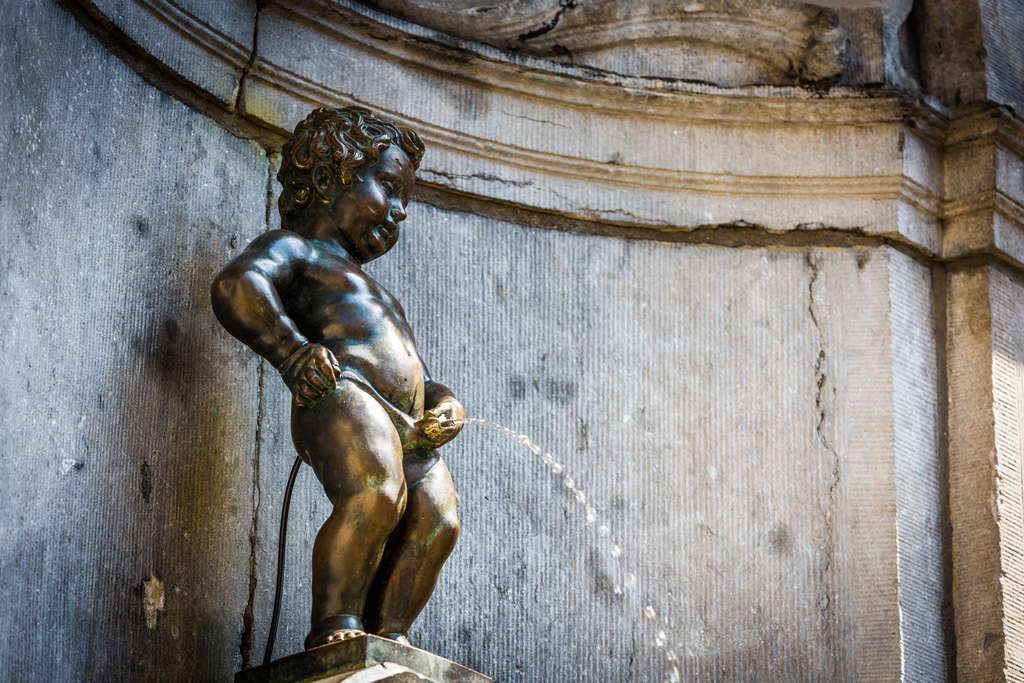 Atomium – Along with Manneken Pis, Atomium is Brussels’ best-known attraction, and although it takes a bit of a tram ride to get there, it is definitely worth your while. The bizarre 102-meter-high steel and aluminum structure is designed by the architect André Waterkeyn for the 1958 Brussels World Exhibition and is the city’s most surreal sight. It represents a molecule of iron magnified 165 million times and visitors can enter the interior where four of the nine spheres are used for the presentation of a show about human life called Biogenium.

An adult admission fee is €15.

Parc du Cinquantenaire – The Parc du Cinquantenaire was established in 1880 to commemorate the country’s 50th anniversary. It is made around the monumental Palais du Cinquantenaire, the two wings of which, linked in 1905 by an enormous triumphal arch designed by the French architect Charles Girault, house two of Brussels’ most interesting museums, the Royal Art and History Museum which displays one of the world’s most extensive tapestry collections in the world, and the Belgian Army Museum and Museum of Military History which provides an overview of the military technology development. 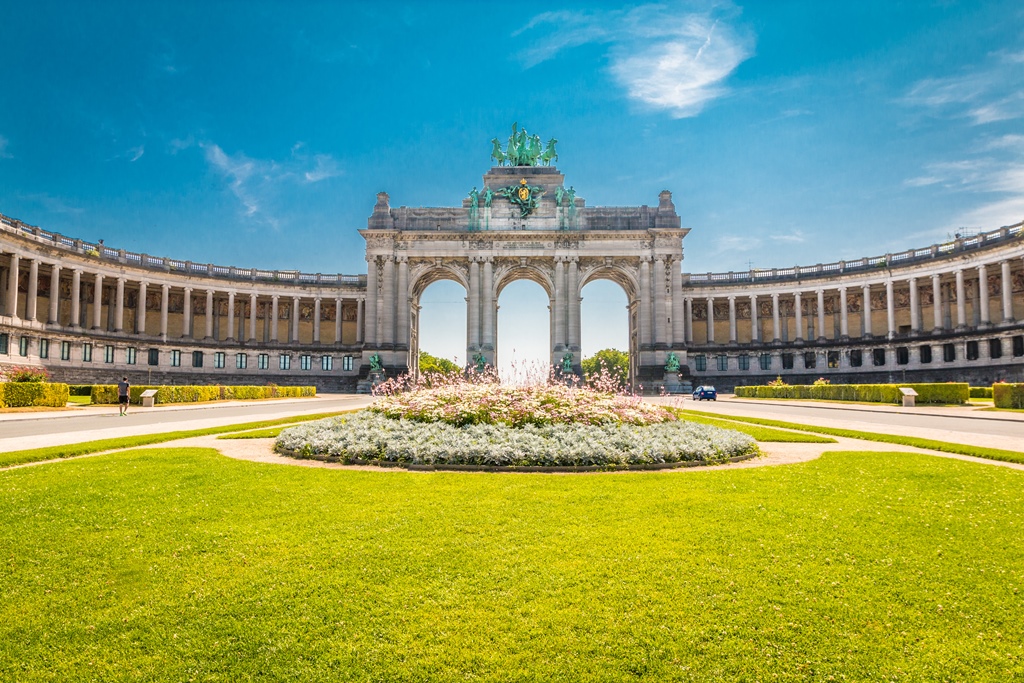 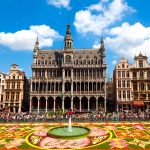 The public transportation network (metro, tram and bus) is managed by the Brussels Intermunicipal Transport Company (STIB-MIVB). The network maps, schedules, frequencies, rates or route planners are available on their website. The night network of STIB (night buses during the weekend) is called Noctis. Some bus lines in the city are operated by De Lijn waterbuses.

Cuistax ride – In case you’re going to the seaside, you cannot miss the adventure of riding a cuistax. It is a combination of a car and a bike, and riding this car-bike down the coastal boardwalk (without any engine, roof or doors) is a very popular activity in the entire country. Cuistax are rented for one person and up to groups of six.

Pairi Daiza – Pairi Daiza is more than just a traditional zoo, it’s a travel experience which takes you on a trip around the globe. You have the opportunity to discover the architecture, ecology and animals from different regions, all within Belgium. The park has won several prizes including three stars from the world-famous Michelin green guide.

The Labyrinth – Near one of the smallest cities in the world, Durbuy, you’ll find a giant maize labyrinth which offers a unique experience both for children and adults. The labyrinth itself is actually a theme park open during the summer, and includes numerous activities with actors that adapt to that year’s theme, e.g. Petar Pan in 2015.

Dinner In The Sky – This wonderful experience combines discovering Belgian cuisine and the panoramic view of Europe’s capital. More than 10 years ago, the first edition of the Dinner in the Sky was organized in this lovely country, showing the best of Belgian cuisine with leading Michelin-rated chefs serving guests above Brussels. For the 10th anniversary, the event had ten tables hovering in the sky right next to the Atomium.

Mini Europe – If you want to travel around Europe in just a few hours, and at the same time not to spend thousands of euros, then Mini Europe in Brussels is the perfect place to go. Here you can stroll around 350 of the most famous monuments and sights of Europe in a miniature version, e.g. the Eiffel Tower, Big Ben, Leaning Tower of Pisa, etc. 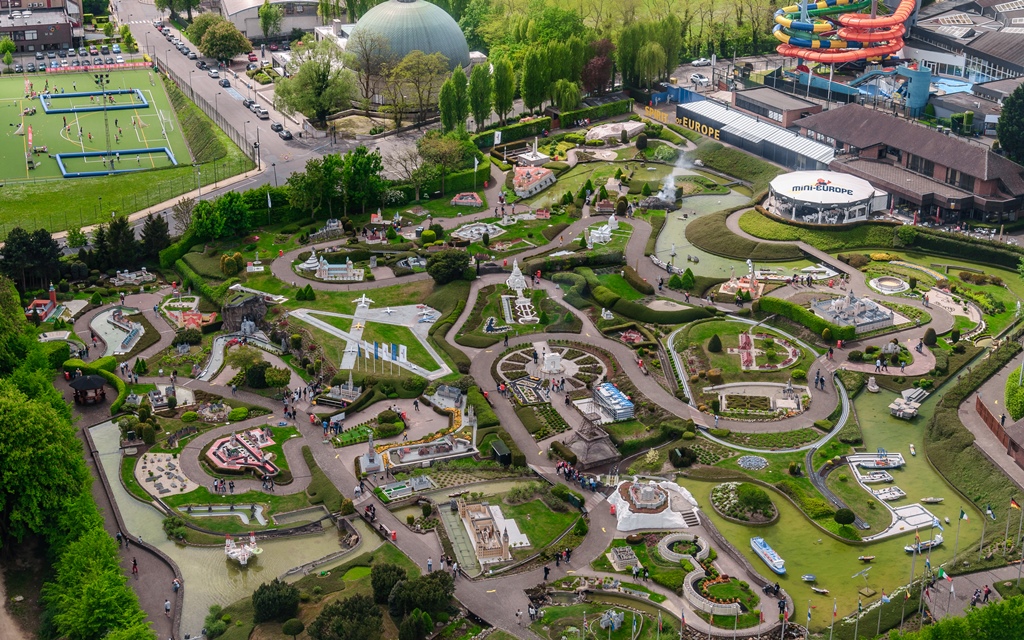 Although it has less material to work with than many other European capitals, Brussels still succeeds in maintaining a good, decent clubbing scene where everyone can find their cup of tea. Converted churches, old cinemas and parties in the middle of the woods are just a part of what the Belgian capital has to offer. Some of the best places to party in Brussels are Fuse, a 20-year-old club with one of Europe’s best techno scenes, a two-floored Bazaar that offers several music genres, Madame Moustache which is kind of a hybrid of a club and a cabaret with a freak show streak, a unique place that likes to change things every day of the week, so make sure to look at the program before going, or Spirito, a former church which is now a crystal-and-gold temple of the night whose motto is ‘the more glitter, the better’. If you’re up for a more relaxed atmosphere, then check out O’reilly’s nua for the best karaoke in town, Delirium Café with more than 30 different beers on tap and over 2,000 more from the bottle, or L’Archiduc where you can enjoy a bit of live piano jazz, or fuller-bodied international jazz sessions (usually on weekends). 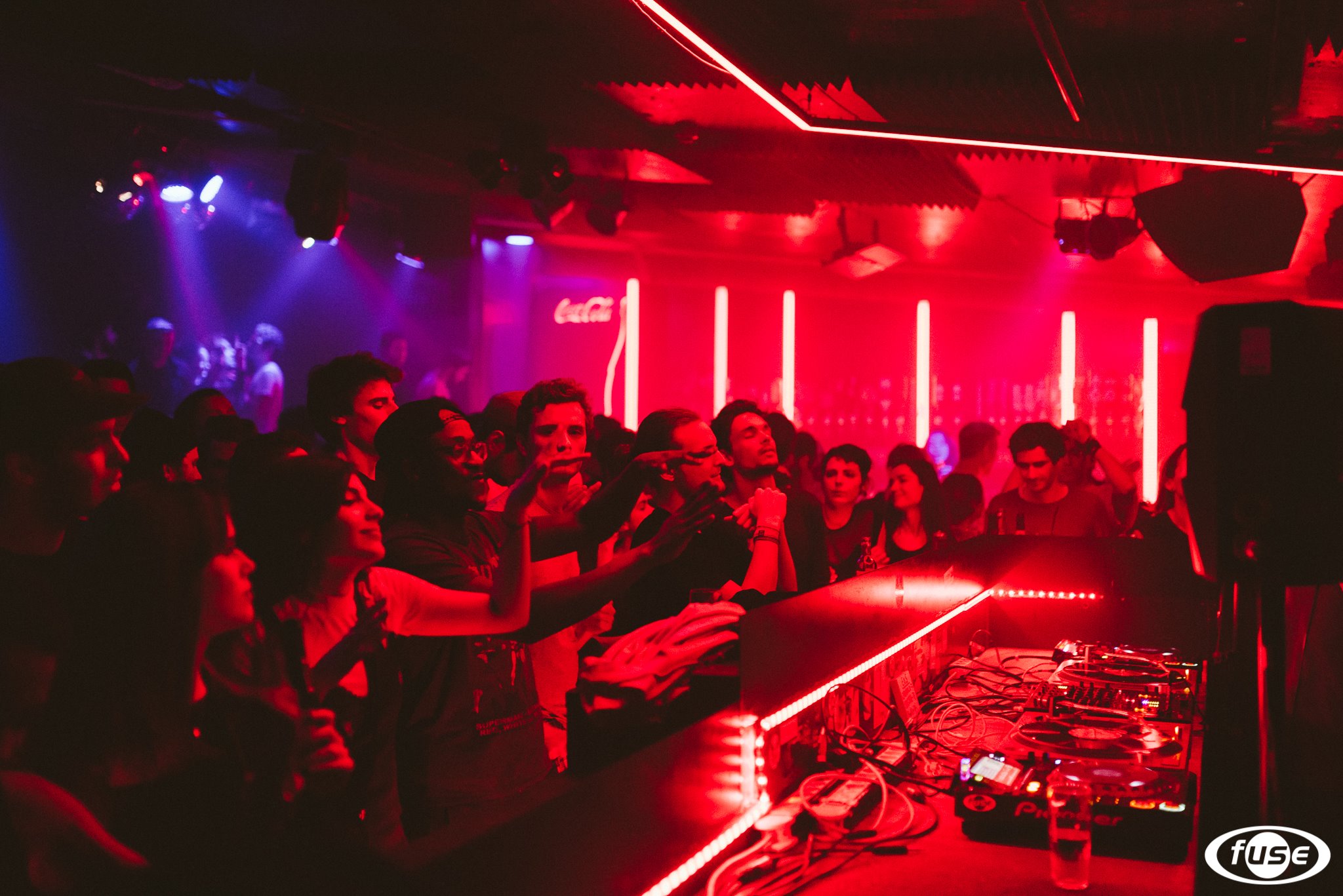 There are different types of parking permits available in the city of Brussels.

Antwerp – Belgium’s second city and biggest port is definitely the country’s coolest city. Despite many historical travails, the city has succeeded in maintaining its intriguing medieval core with plenty of cafes, a charming riverside fortress and an impressive cathedral. Along with that, the city attracts visitors with its vibrant fashion and entertainment scene. 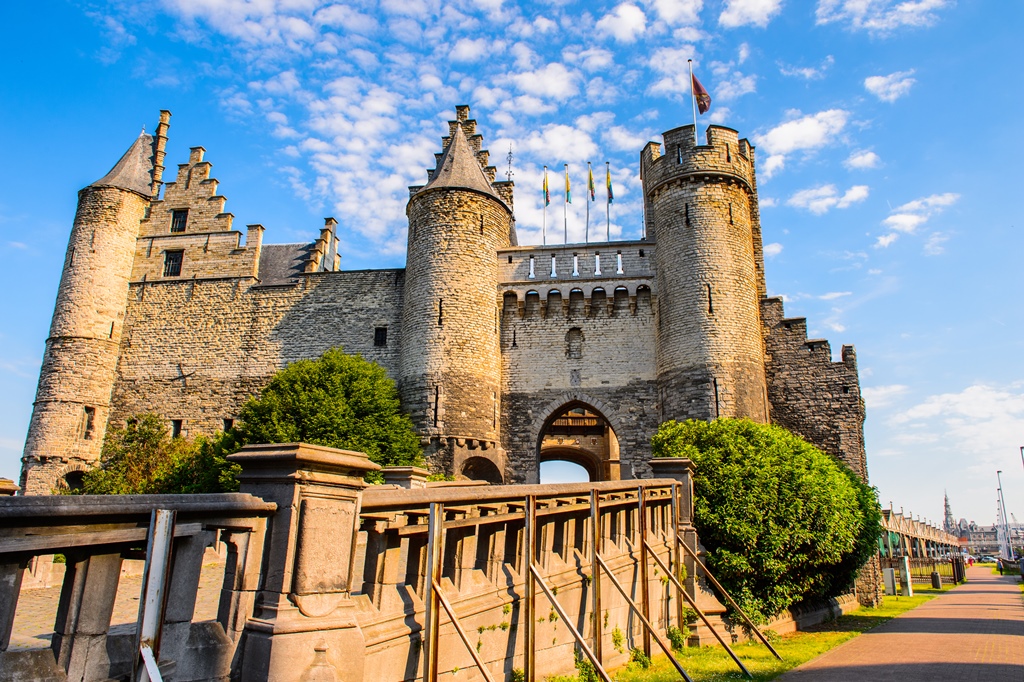 Ghent – Ghent is one of Europe’s loveliest cities, small enough to make you feel cozy, yet big enough to stay vibrant. With its medieval improvidence successfully combined with industrial touch, the city keeps things ‘interesting’. Apart from the canalside architecture and quirky bars, this city has some of Belgium’s most fascinating museums definitely worth a visit. 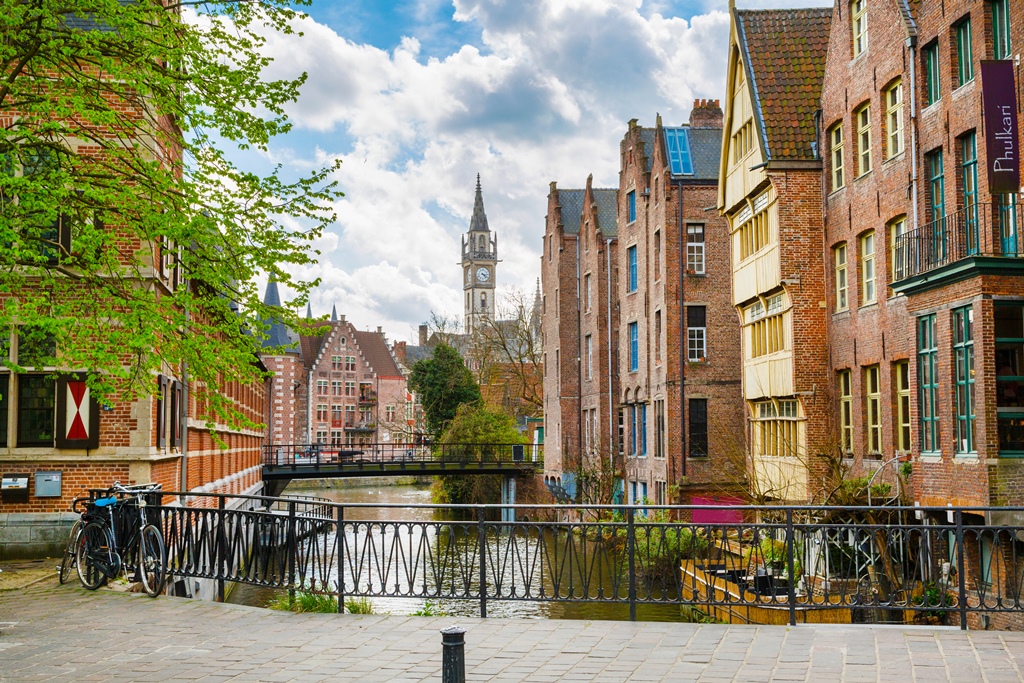 Bruges – If you’ve ever wanted to visit a fairy-tale medieval town, then Bruges is the place to go. Picturesque cobbled lanes and charming canals emphasize the beauty of market squares lined with soaring towers, historic churches and lovely almshouses. The city is magical, and yet it has an even more special charm in spring when daffodils cover the courtyard of the historic fields. 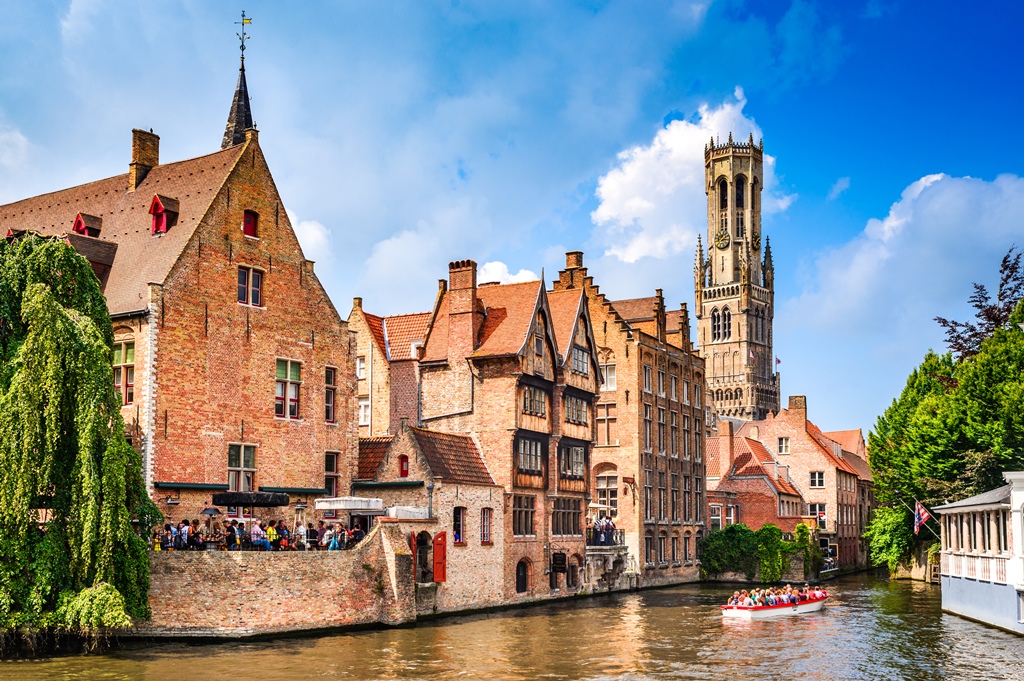 Liege – Wallonia’s largest city may not be as charming as some other places, but don’t be deceived. The city has layers of history waiting to be discovered and enjoyed. Friendly and free-spirited citizens will guide you through an excellent eating scene and vibrant nightlife. As the cultural centre of Wallonia (French-speaking Belgium), Liège has concert halls, theatres, an opera, and many fine museums. 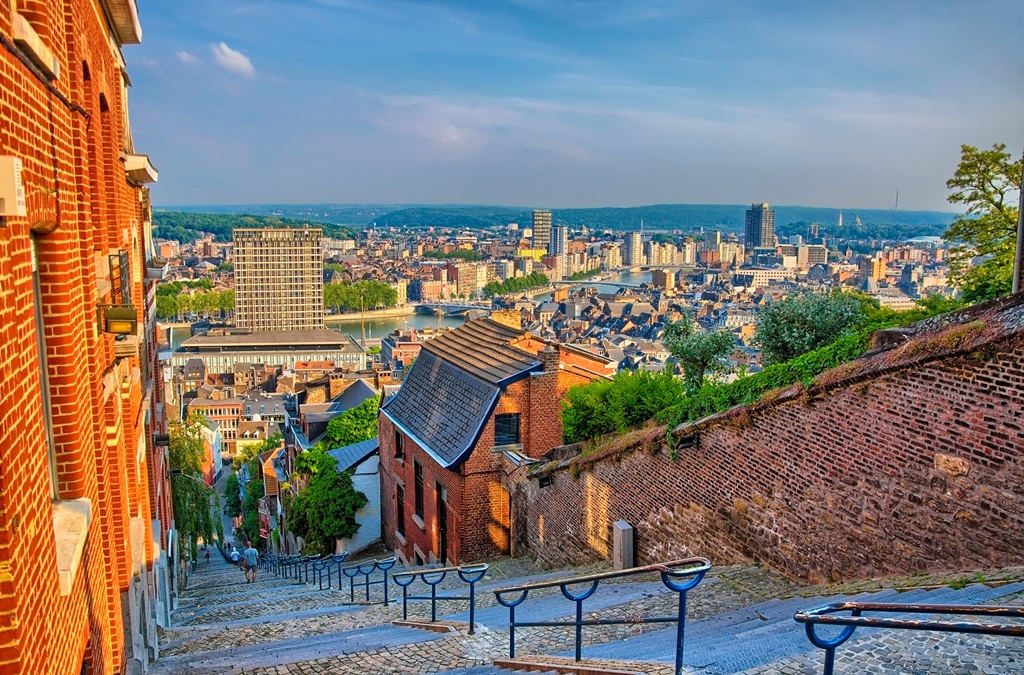 Waterloo – Two centuries after the climactic Battle of Waterloo, when Napoleon’s army faced off against a coalition of British, Dutch and German forces in countryside outside the capital, the place welcomes visitors from different parts of the world. The major attraction at the battlefield is the Butte du Lion, or Lion Mound, with 226 steps leading up to the top for a panoramic view of the battle site.

There are few key shopping points in and around the centre of Brussels. If you’re interested in high-street chains, visit the pedestrianised Rue Neuve, and for more cutting-edge styles, including the Antwerp designers, Rue Antoine Dansaert is the place to go. However, Avenue Louise and the Avenue de la Toison d’Or, south of the city center, are considered the city’s top shopping streets, with a wide range of top-brand boutiques. Artisan shops of all kind are in Ixelles, around the Place and Rue du Châtelain and Rue du Bailli. The Rue du Marché aux Poulets and Rue Sainte Catherine, close to the Grand Place, have become an interesting foodie hub, with arresting shop-designs to go with it – look out for Corica, Charli and Atelier Dierendonck. While in Belgium, you cannot forget to buy a box or two of Belgium’s famous chocolates, so head to the Place du Grand Sablon, the center for chocolatiers. The biggest market in Brussels is the Marché du Midi, held each Sunday from 06:00 to 14:00 outside the Gare du Midi. Flea market the Marché aux Puces is also very popular both among locals and tourists, and takes place daily on the Place du Jeu de Balle. 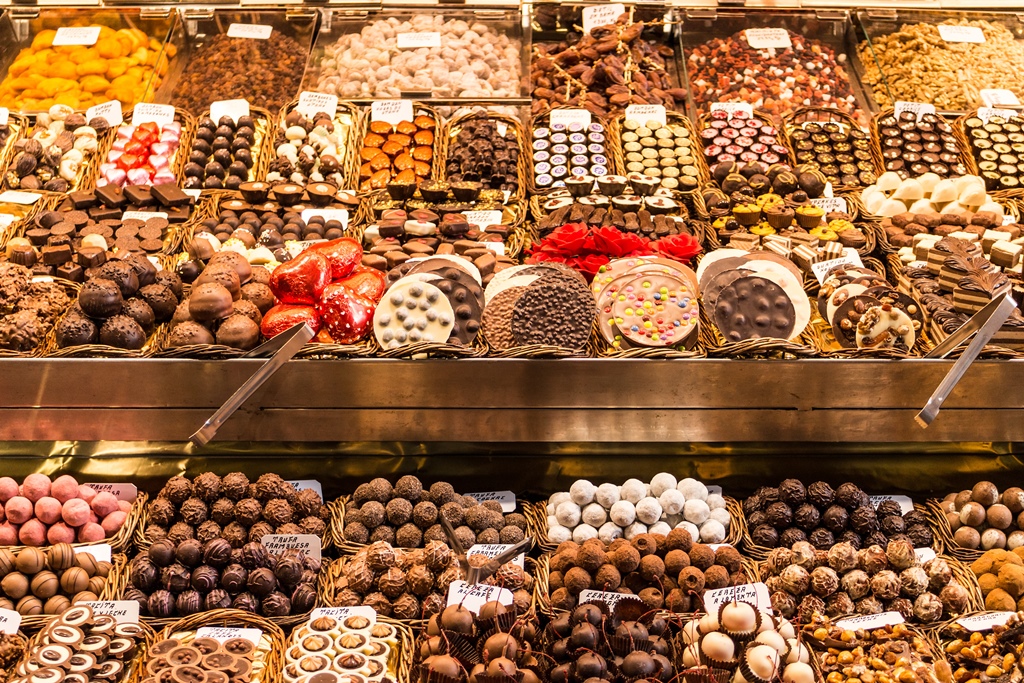 The currency used in Belgium is euro (€). However, using services of an airport money exchange office can be quite expensive, so make sure you have some euros by your side until you reach the city. ATMs are spread across the town, especially in the city center, and they may be the best option for you, since the fee your bank will charge you can be more profitable than going to a money exchange office.