On one of the most beautiful bays in Italy lays Naples. Naples is known for its rich history, architecture, a way of living and on what local insist the best pizza. Palazzo Reale, Castel Nuovo, Duomo, Catacombs, Pompeii and Mount Vesuvius are just some of the sights that should be on your travel plan, but with this guide we will fill up your travel plan and help you understand saying “See Naples and die”, meaning that city’s history and beauty might overwhelm you.

Driving car in Naples is often described as a “pleasurable chaos”. Since the streets of Naples were mostly built during Middle Ages and are not made for car traffic, the city has limited parking options. The city center is a ZTL zone with no access to visiting cars, so try to look for open air parkings located close to the city center or for parking spots marked with blue lines on the streets.

Museo Archeologico Nazionale – The National Archaeological Museum is Europe’s most important and largest archaeological museum. Here, you can see most of the findings from the excavations of Pompeii and Herculaneum, two towns that were destroyed by the eruption of Mount Vesuvius, in the year 79 A.D. Not only that but you can see The Farnese Collection that includes bronze and marble statues as well as paintings and important findings from Pompeii and Herculaneum. The center of attraction is the mosaic from the Casa del Fauno in Pompeii, which consists of over 1.5 Million little pieces and shows a scene from the battle between Alexander the Great and the Persian King Darius III. Since 2000, you can also see the antique Erotica collection, which was locked away in the Secret Room for a long time and includes erotic wall paintings from Pompeii.

Castel Nuovo – One of the main architectural landmarks of the city is Castel Nuovo, often called Maschio Angioino. Built for Charles I of Anjou in 1282, who upon taking over Naples and the Swabians’ Sicilian kingdom found himself in control not only of his new southern Italian acquisitions but also of possessions in Tuscany, northern Italy and Provence. So he decided to make Naples the capital city instead of Palermo. Now it is home of Neapolitan Society of Homeland History and Institute for the History of the Italian Risorgimento. It also hosts civic museum which includes the Palatine Chapel and collection of mostly 17th to early 20th century Neapolitan paintings from likes like Luigi Crisconio and Carlo Vanvitelli. 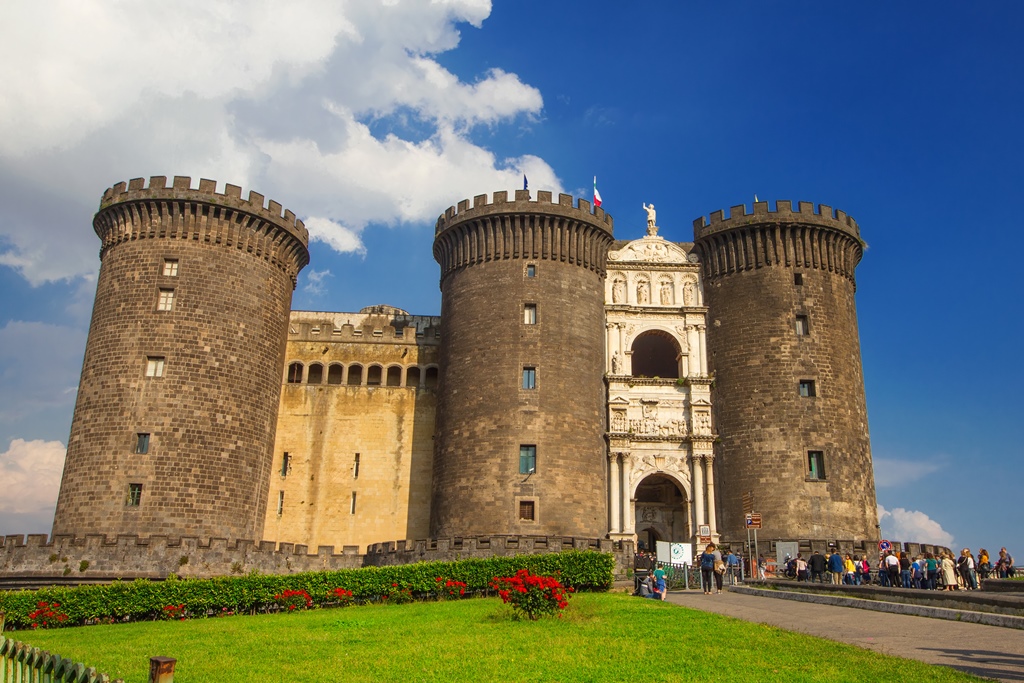 Museo Nazionale di Capodimonte – Museum is located in grand Reggia di Capodimonte and it is one of the largest museums in Italy. It has the prime repository of Neapolitan painting and decorative art, with several important works from other Italian schools of painting, and some important ancient Roman sculptures. Works by greats such as Raphael and Titian, with highlights including Masaccio’s Crocifissione (Crucifixion), Botticelli’s Madonna col Bambino e due angeli (Madonna with Child and Angels), Bellini’s Trasfigurazione (Transfiguration) and Parmigianino’s Antea can be found in Museo Nazionale di Capodimonte.

Palazzo Reale – Built in the 16th century to monument Spanish glory, the magnificent Palazzo Reale is home to the Museo del Palazzo Reale, a rich and eclectic collection of baroque and neoclassical furnishings, porcelain, tapestries, sculpture and paintings, spread across the palace’s royal apartments. Here you can find statues of kings of Naples, The Cappella Reale and Biblioteca Nazionale di Napoli which holds priceless treasures including at least 2000 papyri discovered at Herculaneum.

Castel dell’Ovo – Castel dell’Ovo is a 12th century castle that dominates the Naples seafront. The name comes from the legendary Roman poet Virgil, who supposedly strengthened the castle walls with a magical egg. It is known for its marina and restaurants as well for the magnificent view of the city. It is also used for hosting world famous exhibitions and concerts. 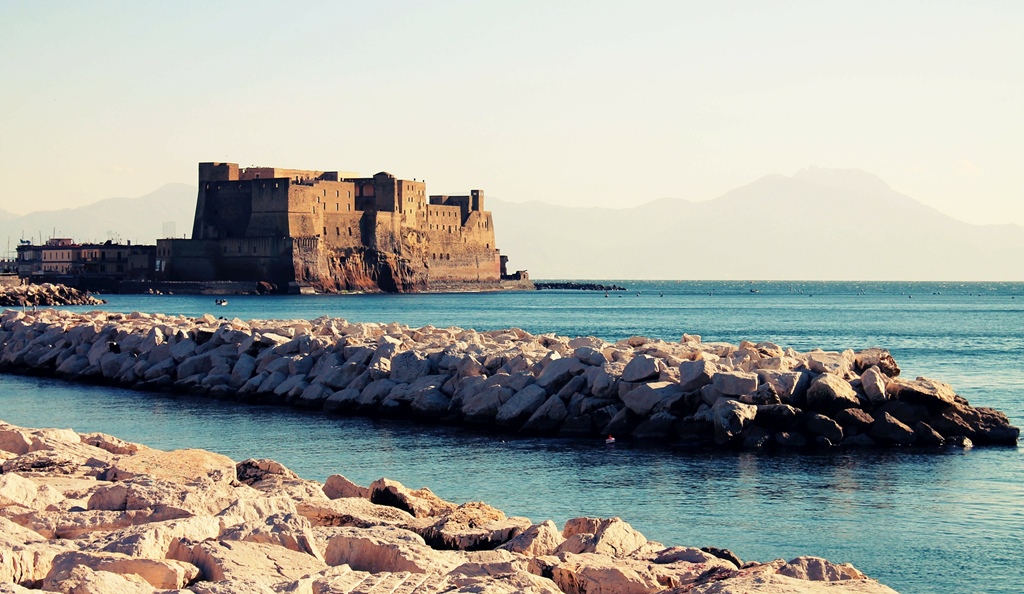 Duomo – Also known as the Duomo of San Gennaro, the patron saint and protector of Naples, is a beautiful medieval cathedral that features the remains of an Early Christian basilica, many notable artworks and the miraculous blood of San Gennaro. The importance of this Cathedral is immense for the city, not only for its historical and artistic influence, but for its importance to the Neapolitan way of life. The main attraction of the interior is the Royal Chapel of the Treasure of San Gennaro, with frescoes by Domenichino and Giovanni Lanfranco, altarpieces by Domenichino, Massimo Stanzione and Jusepe Ribera, the rich high altar by Francesco Solimena, the bronze railing by Cosimo Fanzago and other artworks. Other artworks include an Assumption by Pietro Perugino, canvasses by Luca Giordano and the palaeo-Christian baptistery, with mosaics from the 4th century.

Cappella Sansevero – The Cappella Sansevero is mostly known for its Veiled Christ, a statue created by the Neapolitan artist Giuseppe Sanmartino in 1753. The famously realistic statue rests at the center of the chapel, but there are other works of art on display here, too, including the Statues of the Virtues, which portray themes like Decorum, Modesty and Sincerity. The chapel itself, in both its 18th century architecture and design, is also a sight to behold.

Catacombe di San Gennaro – The Catacombe di San Gennaro date back to the 2nd century, but they became a pilgrimage site in the 5th century when San Gennaro was laid to rest here. The catacombs are home to three types of the tomb, each corresponding to a specific social class. The wealthy opted for the open-room cubiculum, originally guarded by gates and adorned with colourful wall frescoes. The smaller, rectangular wall niches, known as loculum, were the domain of the middle classes, while the forme (floor tombs) were reserved for the poor. Underneath you will find the lower catacomb which extends around the Basilica of Sant’Agrippino, following a reticulated structure. The vast spaces and the regularity of its shapes silently welcome visitors into a timeless place.

Visit Pompeii – Around 30 minutes from Naples city center you can find Pompeii. The legendary city of Pompeii was destroyed by the eruption of the Vesuvius in the 79 AD and its thrilling yet moving remains are a window far into the past. The foundation of this ancient civilization was preserved by volcanic material. The paved streets lead to residences, temples, amphitheaters and even a brothel, identifiable not only thanks to architectural evidence, but also to the casts of perished bodies found within, on display throughout the ruins. 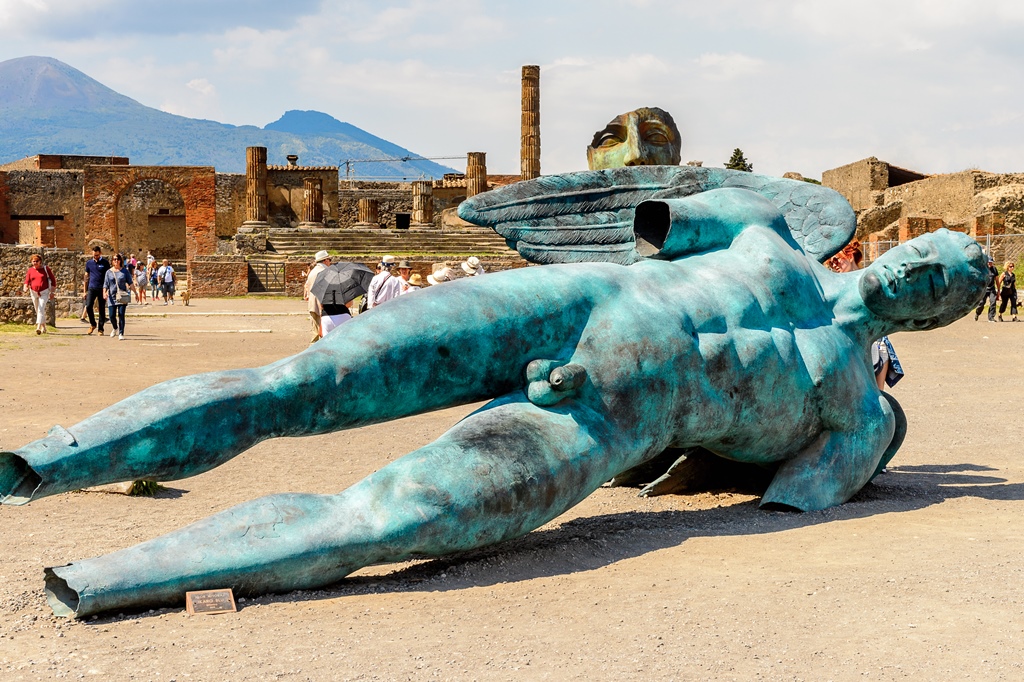 Visit Herculaneum – Another city that was devastated after the 79 AD eruption of Vesuvius was Herculaneum. This city is the lesser known counterpart to Pompeii but is just as interesting and a fantastic sight to visit. Herculaneum is actually considered to be a better preserved example than Pompeii and still has some of its wooden structures, frames and roofing intact.

Climb Mount Vesuvius – Mt. Vesuvius is one of the most famous volcanoes in the world and looms over Naples. It is a short drive from the city and makes for a pleasant stop along the way to Pompeii, and it will take you around 20 minutes to hike up to the top. From where you will enjoy the breathtaking view across the Bay of Naples as well get the chance to see Mt. Vesuvius crater which destroyed Pompeii and Herculaneum. But don’t expect to see bubbling lava lakes or anything like that, because Vesuvius last time erupted in 1944. 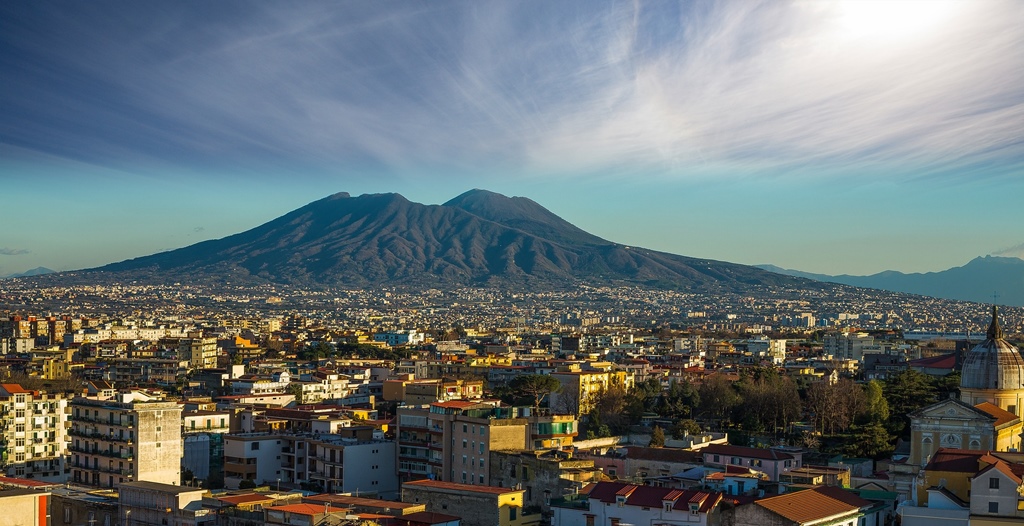 Wander around Santa Lucia – If you want to experience Naples from eyes of local, head down to Santa Lucia. It’s located to the west of the Piazza del Plebiscito, this district has a myriad of narrow cobbled streets that wind down to the sea and offer an array of craft shops, restaurants, cafes and shops. Here you will see locals doing their daily business, clothes hang out on washing lines and children play football on the street etc.

Walk down the promenade – Naples as most cities that are settled on the seaside has its own promenade called Lungomare. Stretching 2.5km along Via Partenope and Via Caracciolo, Lungomare is a green and blue oasis in the center of the city with some of the most panoramic views in the world.

The Gaiola beach – The Gaiola beach is most beautiful and famous beach in Naples and for a reason. If you want to get a spot there you will need to get up early in the morning because it gets crowded pretty fast.

Posillipo Bagnos – Just outside of the city center small Posillipo beaches can be found. Elena is the biggest one, filled with various activities and bars, while Sirena is the smaller one and very popular among locals. 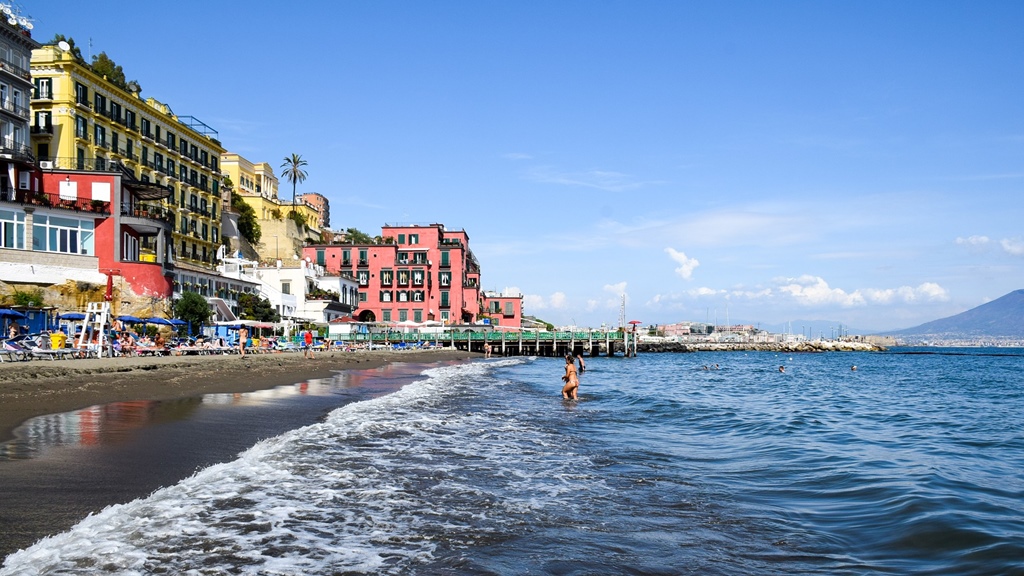 Baia Trentaremi – This beach is close to the Gaiola beach. It is a rocky beach filled with untouched nature. Perfect location for relaxing and going for a swim.

Miseno and Miliscola beaches – These two beaches offer something for everyone from vibrant lifestyle to relaxing spots for families to various sport activities the in sea. Both beaches are one next to the other and it will take you one hour drive from the city to get there, but it is a perfect place for day trip.

Naples has one of the liveliest nightlife scenes in Italy. A huge student population means that there are plenty of bars and clubs working every night. You can start your evening at Piazza Bellini, where you can find Neapolitan youth socializing while drinking on the streets. It’s a tradition that you need to grab a drink in plastic glass from one of the bars around the edge of the square and find a place in the middle to hang out. When you are ready to head down to clubs you can choose in a variety of musical tastes, it’s almost impossible not to find something for yourself. If you are into less crowded and more relaxed spot, then Bourbon Street Jazz Club is for you where live music is always being played at. Most famous club in Naples is Arenile di Bagnoli, it’s located on the beach and you can dance to all types of music ranging from techno to pop. Another big club is Club Partenopeo, it’s mostly orientated towards techno music, but depending on the night you can hear trap, reggaeton and even live Jazz music. Open only during summer one of the most visited nightlife spots is Neasy. This beach lounge bar is working through day and night and regularly hosts international DJs. If you head little bit further from city center you can reach Pouzzoli where big clubs like Golden Gate and Duel Beat can be found. Both of these clubs are playing mostly electronic and dance music. And for those looking for more luxurious, glamorous and exclusive locations then La Mela and Il Fico are your destinations. 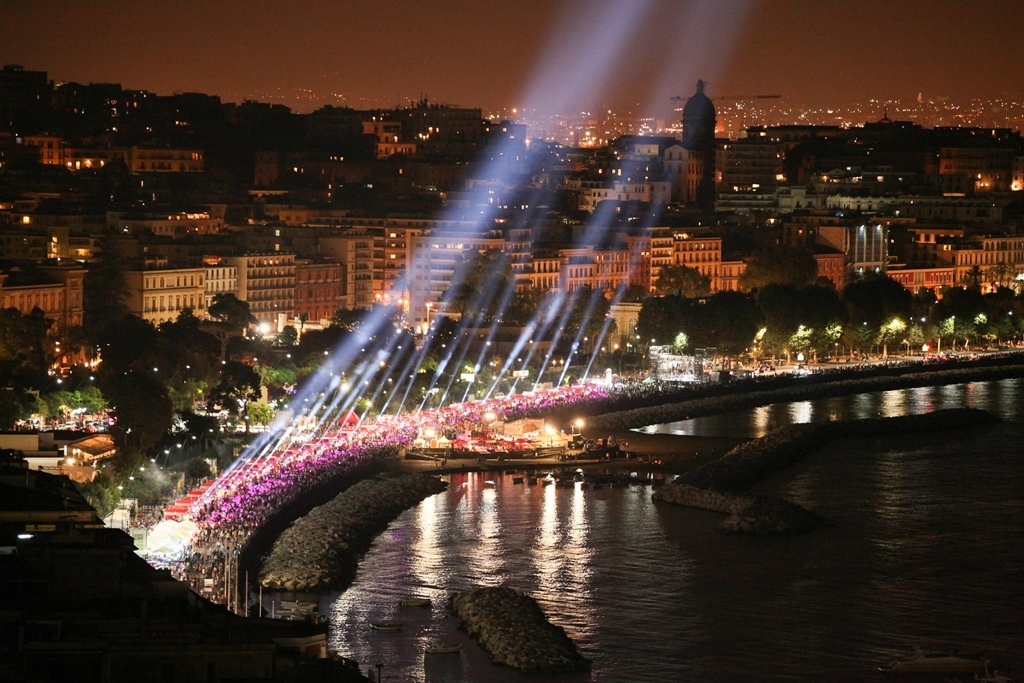 Shopping in Naples range from world-famous brands to local souvenir shops, something for everyone’s budget. Start off in Via Toledo which is longest shopping street in Naples. Here you can find numerous boutiques, a department store, and branches of big chains. Close to Via Toledo is Via Chiaia, location for those who are looking for luxury brands and elegant clothing stores. If, on the other hand, you are interested in antiques and craftwork head down to Via San Gregorio Armeno, the street of the nativity scene makers, they produce wonderful nativity figurines, and in the alleyways of the historic city, you can find many antique dealers. For those looking for malls or outlets visit magnificent Galleria Umberto I or enormous Centro Commerciale Auchan and near city center you can find Galleria del Mare. 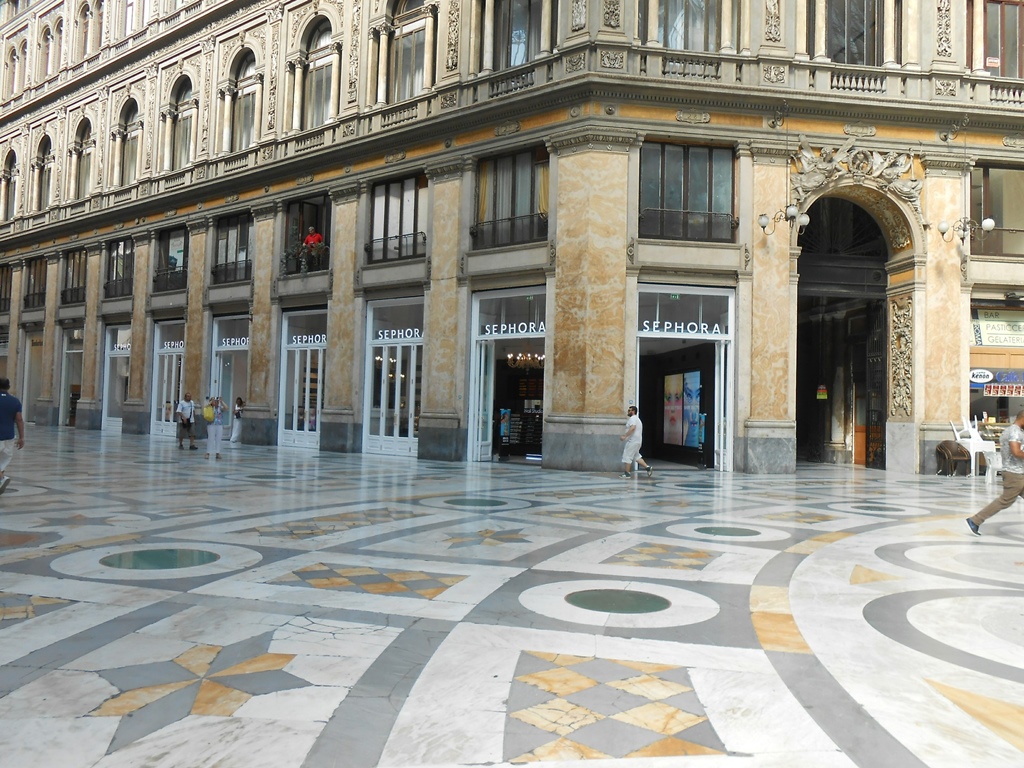 As in most European countries, including Italy, Euro (€) is official currency. Using ATMs, which are spread all across the town, to withdraw money from is fastest and most convenient option. But also you can exchange money your money in banks or currency exchange offices, but bear in mind that these options can be quiet expensive and rates vary.

In the Palazzo Reale at Piazza del Plebiscito, 1