The Maltese archipelago situated itself right in the middle of the Mediterranean, south of Sicily and north of Africa. It consists of few islands, only three of which are inhabited: Malta, Gozo and Comino, with a total population of 400 000 people. Malta is the largest and, being the cultural and administrative center, the most important among them. If you’re up for some medieval towers, oldest known human structures in the world and wayside chapels, then Malta is the place to go, since the island is often referred to as an ‘open-air museum’. Check out our guide for a wonderful weekend in Malta! 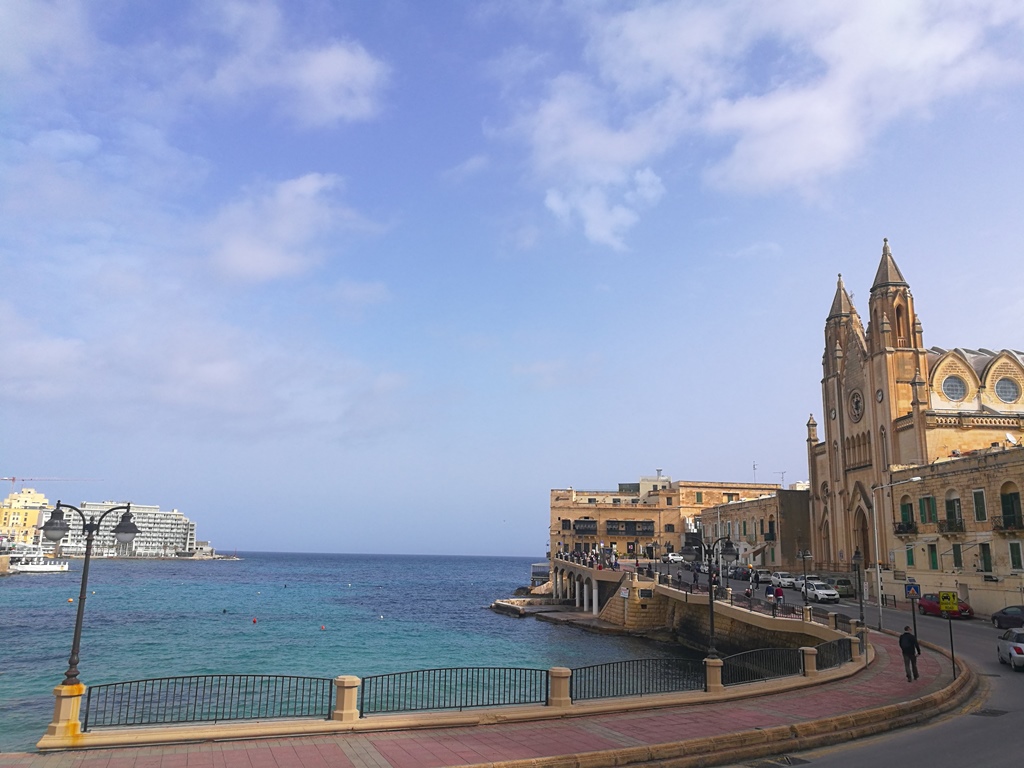 First day is always reserved for the capital city. Valletta is maybe the smallest European capital, but definitely one of the most intriguing as well. The city is protected by a series of ramparts, fortifications and ditches, built in the 16th century as a defense system against the Turkish invaders.

Start your day with a ride in a dghajsa, a traditional Maltese water taxi. It’s the best way to see the city from the perspective of former attackers and to get the impression of the towering limestone walls that protect the city. Now there are only a few boats left, but they will pick you up from Valletta or Vittoriosa Waterfront (in the Three Cities) and take you on a half hour tour of the harbor and all its creeks. During your tour of Valletta’s Grand Harbour, you’ll come across enormous cruise ships, fancy yachts and local fishermen making their living. The cost is 8 euros per person, with a minimum of two people and a maximum of six per boat. Once you’re back on land, take the elevator across the street and head to the Upper Barrakka Gardens to enjoy more of the breathtaking views of the city and sea, but of the Three Cities – Senglea, Vittoriosa and Cospicua as well. For those of you who don’t know much about Maltese history, these cities have been doorways to commerce, migration, encounters and cultural exchange for centuries. 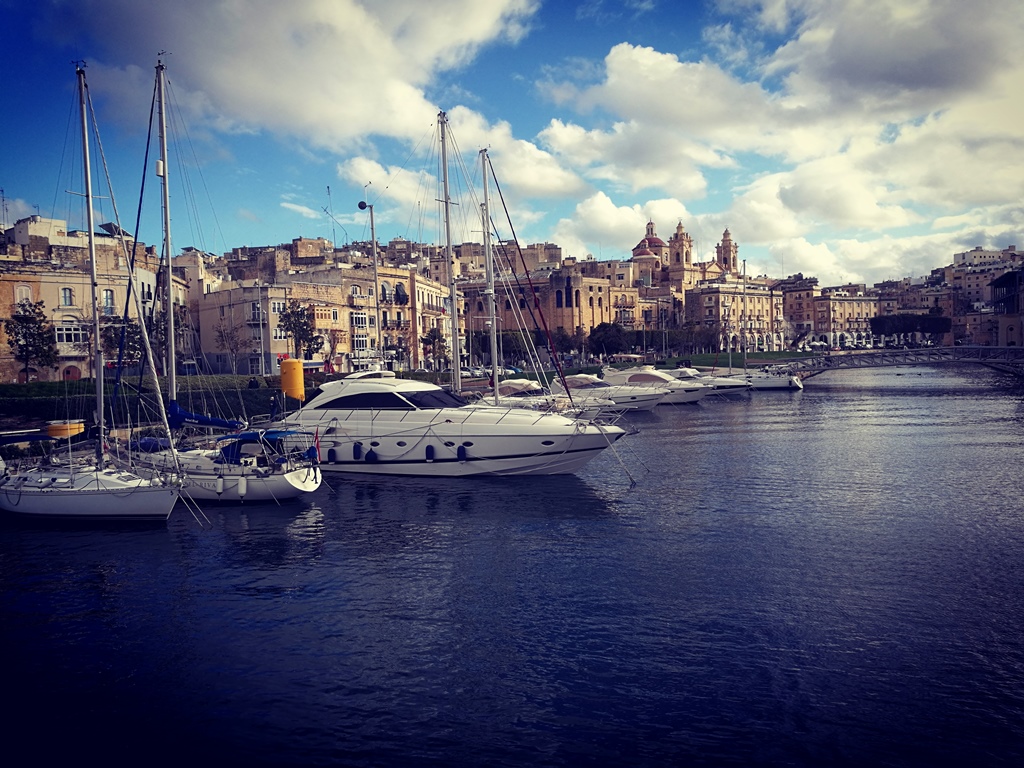 Cospicua, one of the Three Cities

After the Co-Cathedral, walk down Republic Street to see the area around Palace Square on your way to the Grand Master’s Palace, the most magnificent building in Valletta, with many shops, cafés and restaurants. Part of the building is now used as the House of Parliament and the office of the President of Malta. The rest of the building is open to the public as a museum. After the visit, stop by at the famous Caffe Cordina, founded in 1837, and try ‘Kwarezimal’, the traditional Maltese pastry, usually baked during Lent.

You should also visit Casa Rocca Piccola, the only privately owned palace in Valletta open to the public. You’ll wander through room after room of aristocratic treasures and see a marble statue of the goddess Diana overlooking a beautifully set table. For an extra intimate experience of this home, try to get a guided tour with one of the family members who still live in the palace.

Continue discovering Malta at the nearby National Museum of Archaeology, where you can see tools, jewelry and stone figures dating back to 5200 BC. Highlights include the ‘Sleeping Lady’, the ‘Venus of Malta’, bronze daggers, the Horus and Anubis pendant and the anthropomorphic sarcophagus, both belonging to the Phoenician Period. The museum is open daily 09:00 – 18:00 and the admission fee is €5 (students and children €3,50). 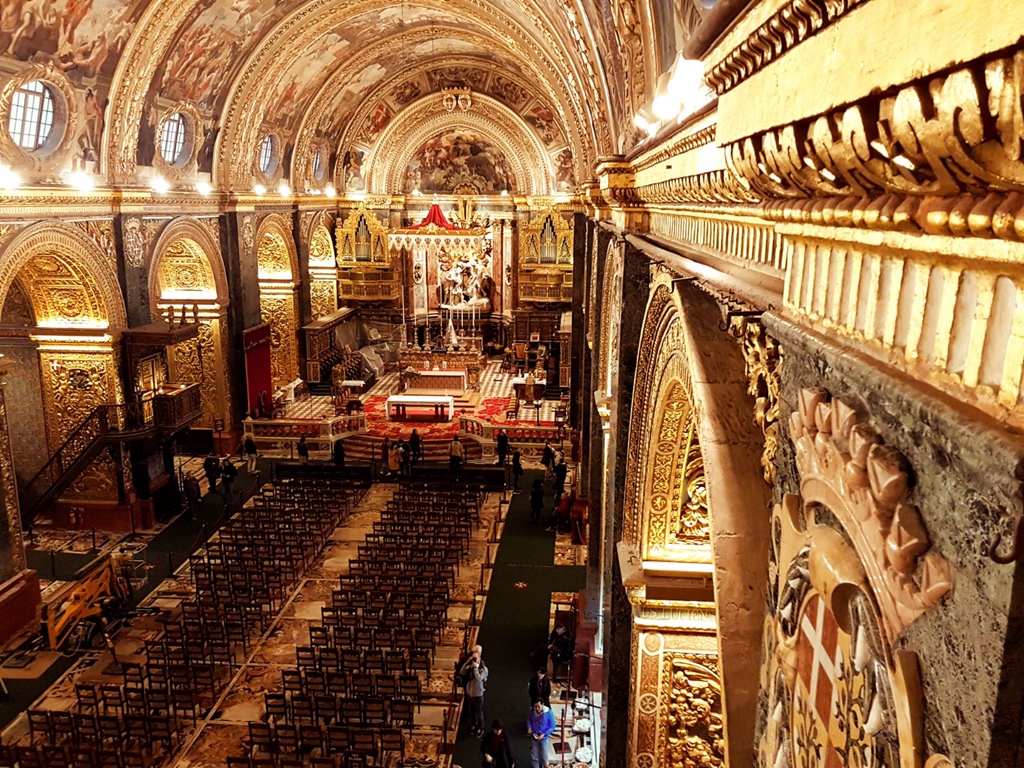 Located only 23 km from Valletta, the former capital of Malta, Mdina, is a tiny hilltop settlement which traces its history back 4 000 years. Known as the Cittadella (Citadel), the town’s fortifications date back to the Medieval Period when the city was ruled by the Arabs and Normans. The most obvious influence of the Arab occupation is Mdina’s labyrinthine street plan. The town’s Main Gate was built in 1724 in fantastic Baroque style. Once you enter this dramatic doorway, be ready to leave the 21st century behind. Only residents’ cars are allowed inside and even the street signs are scripted on porcelain plaques. Make sure to go to the Saint John’s Bastion and Saint Martin’s Bastion for amazing views of the idyllic region surrounding Mdina. 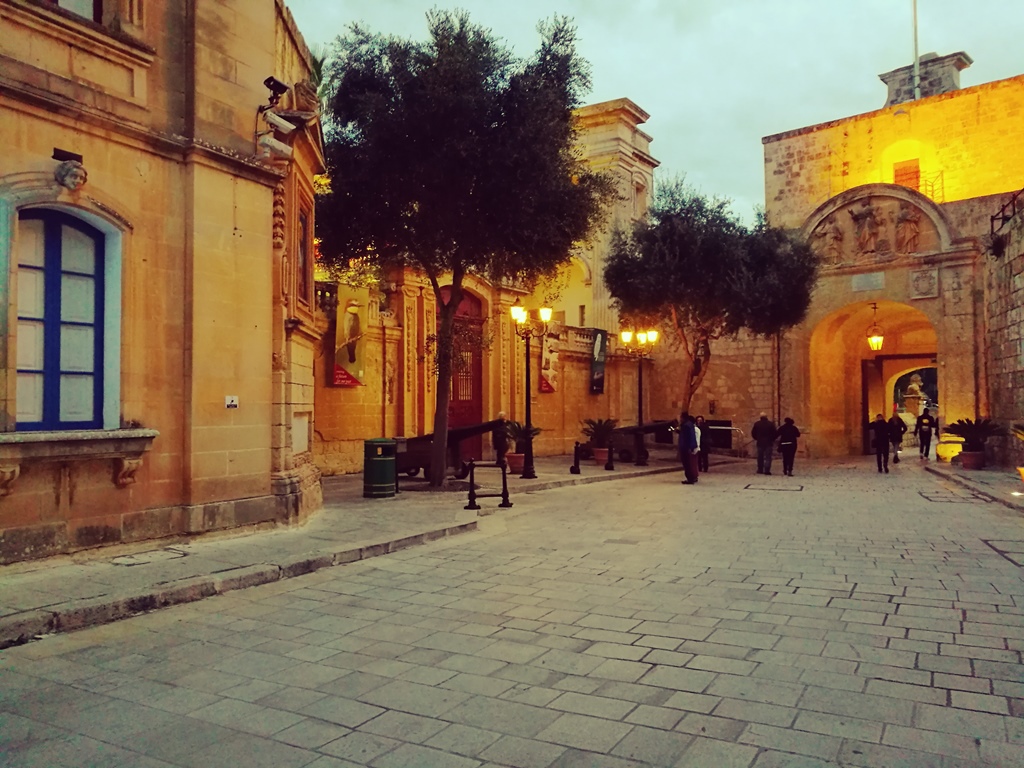 Next stop is Mdina’s Natural History Museum, housed within the Magisterial Palace of Justice, an impressive building dating back to the 18th century. The highlights are the Geology and Paleontology collections, with more than 10,000 different types of rocks and minerals as well as an excellent selection of fossils. Other exhibits include birds, fish, shells, insects, and mammals, and displays of their natural habitats. The museum is also worth visiting just to see the gorgeous courtyard and stunning interior of the Palazzo Vilhena. Right beneath this palace, you’ll find the Dungeons Museum, which illustrates the history of prison life in the ex-capital. The attraction features underground chambers, cells and passageways once occupied by prisoners. Having recreated the scenes, the museum shows the darker side of Malta’s past through historical context. It is open daily from 10:00 a.m. to 04:00 p.m.

The town is crammed with magnificent golden-stoned mansions built for the aristocracy in the 15th and 16th centuries. The most imposing one among these is the grand Palazzo Falson, the second oldest building in the city, with a number of elegant rooms built around a central courtyard in typical medieval Spanish style and a lovely little museum with lots of interesting stuff to see. 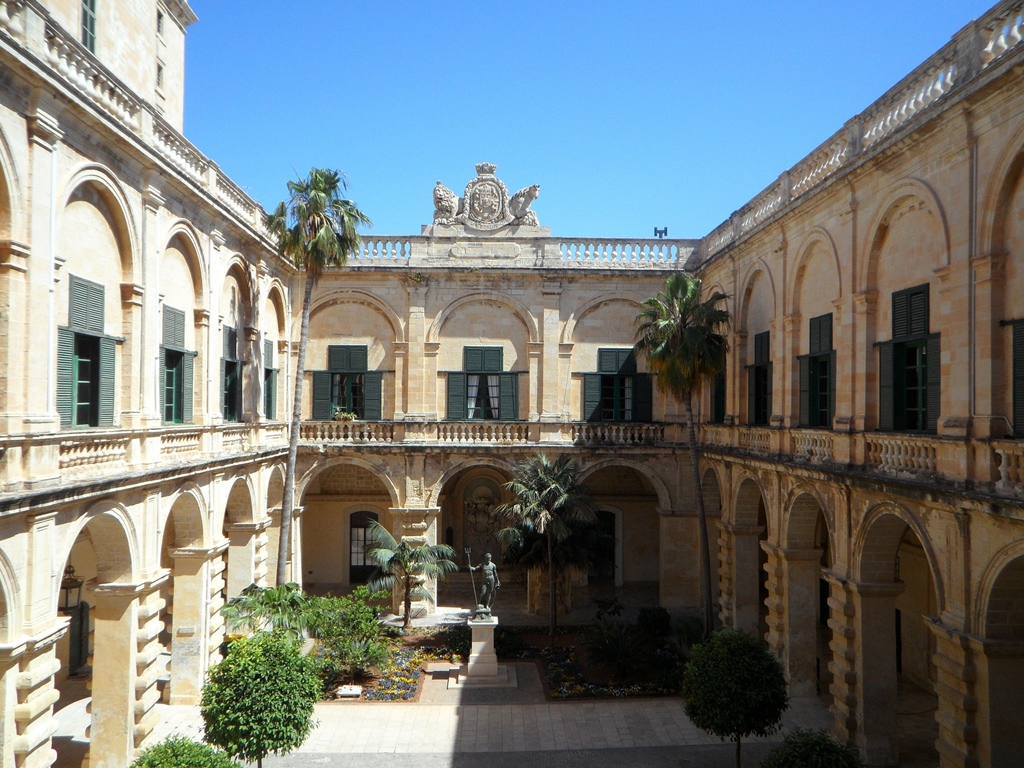 The city’s main landmark, however, is massive St Paul’s Cathedral, completed in 1702, and an extraordinary example of the Baroque style. Wonderful treasures of art are displayed throughout the cathedral’s various chapels, and many of Malta’s bishops are buried here in the side chapels. The most significant possession of the cathedral is the 12th-century Byzantine icon of the Madonna in the Chapel of the Blessed Sacrament. Also, visit the nearby Cathedral’s Museum, situated on the same elegant square as the cathedral, next to the Archbishop’s Palace, has a small but excellent collection that includes works by Rembrandt and Dürer. The combined ticket to the cathedral and museum costs €5.

Mdina is an excellent day trip from Valletta, so come back to the capital in the evening and enjoy the Maltese nightlife. The hotspots for some fun are usually at the Manoel Theatre and the St James Centre. However, a new vibrant scene recently opened on the Valletta Waterfront, just below the city walls. The area was renovated and now it features fashionable bars, restaurants, shops and clubs.

All movie fans among you have probably already heard of Popeye Village, also known as Sweethaven Village and Danish Village, a film-set built village, which is now converted into a small attraction fun park and an open-air museum. The site is located at Anchor Bay, 3 km from the village of Mellieħa.

A visit to Popeye Village is an absolute must if you’re traveling to Malta, especially for families, since your kids will be able to meet their favorite cartoon characters. This day trip gets even better in summer because you can enjoy numerous beaches and coves around the area or relax at the enclosed Anchor Bay with sun beds, showers, bathing areas, pools and kids area.

One of the highlights of the attraction is the popular ‘Take 2 filming’, an event where you can take part in daily filming and become an actor of a live action movie. 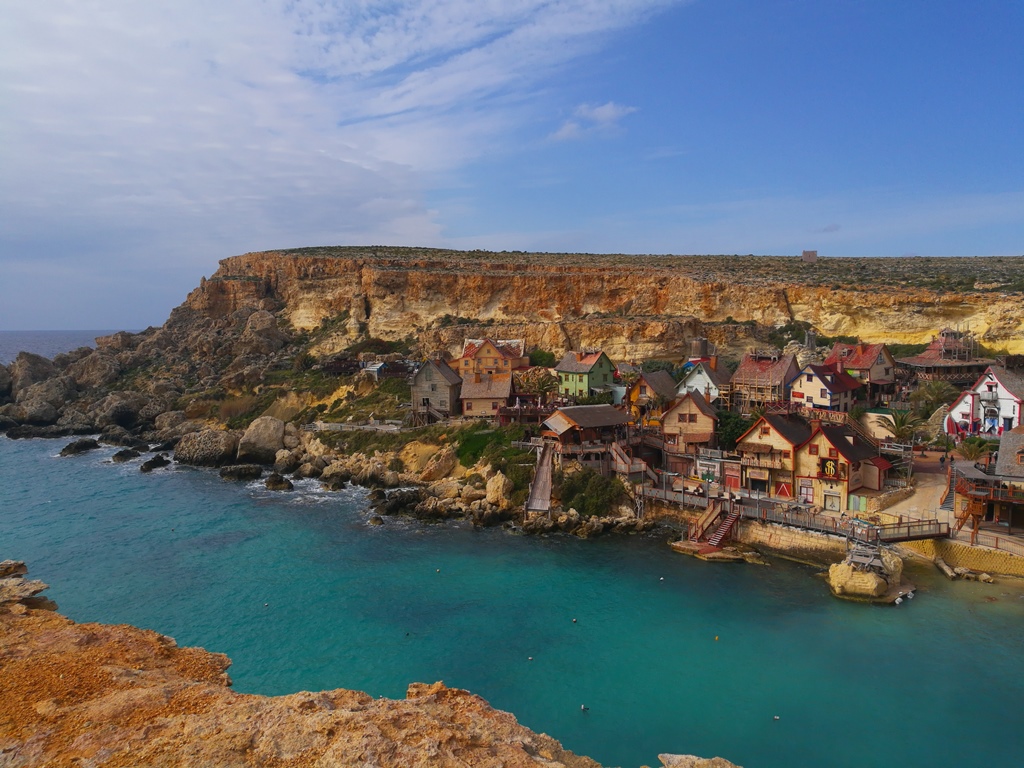 In Sweethaven Village, apart from meeting the characters like Popeye the Sailor, Olive, Bluto and Wimpy, you can take boat rides, participate at activities such as puppet shows, face painting and balloon modeling, visit museums, go wine tasting, play mini golf and much more. Besides these attractions, Popeye Village provides other activities according to the respective season like Water Trampolines, a Play pool and Boat rides in Anchor Bay during the marvelous Maltese Summer or a Christmas Parade and Santa’s Toy Town & Crib in Christmas time.

The admission to the Village depends on the season – during winter the entrance tickets costs €10.50 (for adults) and in summer the price is €15.