Istanbul, one of the greatest European cities with population rapidly growing each day is the economic, cultural and historical center of Turkey. This magnificent city lies on two Continents divided by the Bosphorus Strait being a cultural hub where you can experience a modern western city combined with a traditional eastern city. Since the foundation of Byzantium in the 7th century, the city has always had an important role in the history of humanity which is why they often call it the Second Rome. Istanbul is the city which almost never sleeps and offers both the tradition and modernity, and once you go there, you are planning to come back.

Istanbul is a place which you can explore endlessly, but in case you are planning to visit it for the first time, check out this 4-day plan through must-see places in Istanbul!

Istanbul has two airports, Atatürk Airport on the European side and Sabiha Gökcen Airport on the Asian side, which are both approximately 30 minutes away from the central district Beyoǧlu by shuttle bus or taxi.

Start the day in this central part of the city which is famous for the main square Taxim and the main farethrough İstiklâl Caddesi, a pedestrianised 1.6 kilometers (1 mile) long street filled with shops, cafés, patisseries, restaurants, pubs, wine houses and clubs as well as bookshops, cinemas, art galleries and museums. The street is also special for its famous red tram which runs between the Taxim square and the Tünel; the beginning and end of Istiklal. 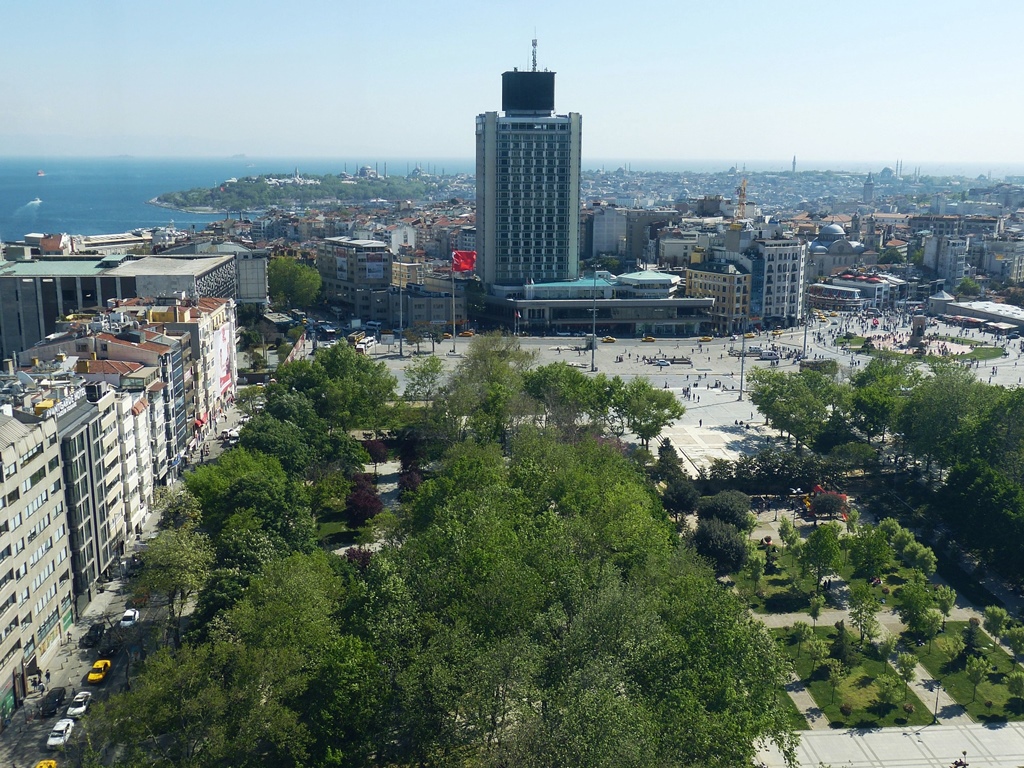 Turkey is famous for its inexpensive shopping and in İstiklâl you can do some typical western shopping in the numerous fashion stores such as Mango, Koton, Zara, LC Waikiki, Diesel, Nike, Adidas and many more, some of them being tax-free. If you are looking for something more authentic in this area, try to look for the small passages which you can enter directly from İstiklâl, and the most famous one is the Çiçek Pasaji, once known as a meeting location for the poets, writers and artists. Today, the passage has cafés, fresh fish and vegetable market as well as souvenirs. Enter it and look around to feel the atmosphere of some passed, forgotten times.

The street, also, offers all types of Turkish dishes. Whether you are looking for a place to have breakfast, lunch, something quick or a dessert, this area has it all, from traditional turkish cuisine such as kebap, künefe, baklava, köfte, lahmacun, dondurma, börek etc., to places which offer asian, italian and other international cuisine. 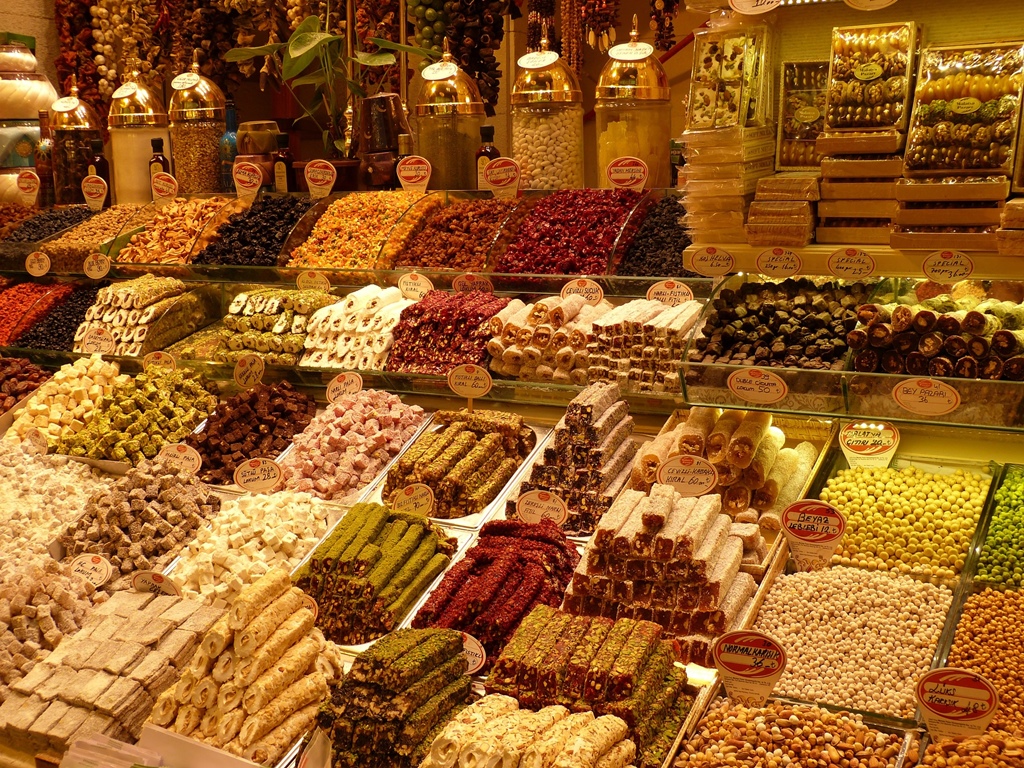 At the end of the İstiklâl rises the Galata Tower, one of the most recognizable symbols of Istanbul. It is a medieval nine-story, stone tower, 66.90 meters tall which made it the tallest building during the expansion of the Genoese colony in Constantinople. Today, it is one of the popular tourist attractions with a restaurant and a café at the top which offer a breathtaking panoramic view of entire Istanbul and the Bosphorus. Next to Galata Tower stretches the Galata Bridge with fish restaurants at the bottom being a great choice for the dinner by the sea. 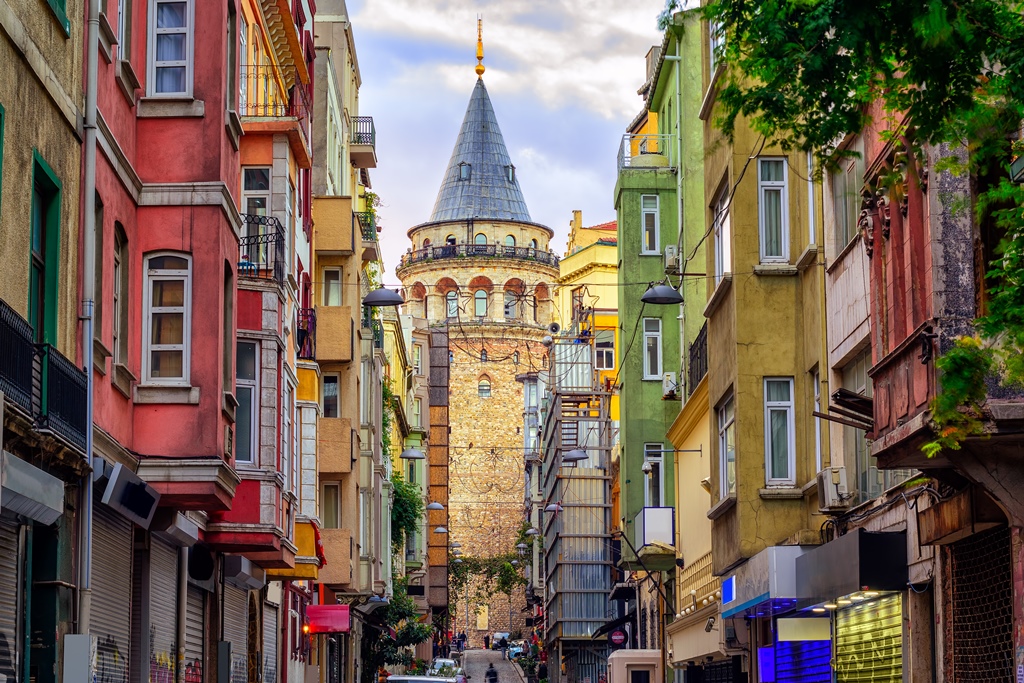 When the night falls, experience the Beyoĝlu’s exciting and diverse nightlife. Half of the population seem to descend on this district during the Fridays and Saturdays, but if you are there during the week, the area still offers a wide spectre of cafés, rooftop bars, jazz cafés and nightclubs for partying and drinking.

On the West, across the Beyoĝlu lies the essential part of Istanbul for all the first-timers, the old town or commonly known as the Golden Horn. The natural starting point is the magnificent Hagia Sophia (Aya Sofya), first a Greek Orthodox Christian basilica, later an imperial mosque and today a museum. Stand beneath the mighty 50 meter-high dome and soak up the incredible sense of space this architectural masterpiece achieves. On the upper floor is the gallery with a clutch of shimmering gold, figurative mosaics and faintly scratched Viking grafitti. 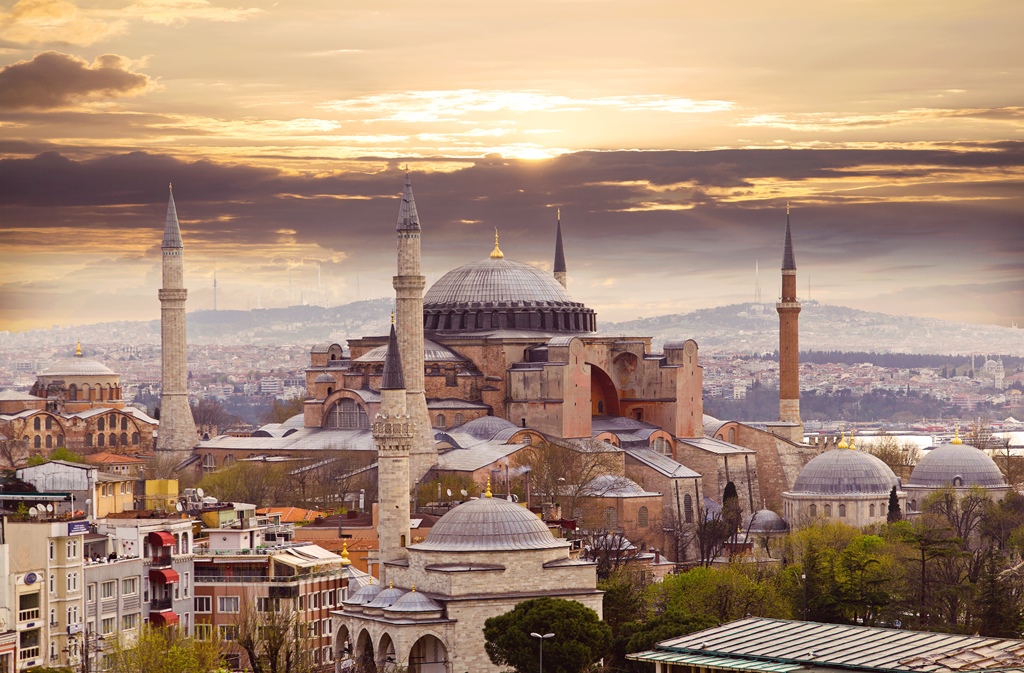 Across the Hagia Sophia lies another architectural wonder – Sultan Ahmet Mosque or popularly known as The Blue Mosque. This masterpiece still functions as a mosque. Interior walls consist of hand-painted blue tiles, and at night, the lights frame the mosques domes and minarets. It is a popular tourist attraction, so you will be able to enter the part intended for tourists under condition that you respect the muslim rules inside of it.

Right next to The Blue Mosque you can enter the Turkish and Islamic Arts Museum. The building was formerly the palace of Pargalı Ibrahim Pasha, the second vizier of the Suleiman the Magnificent. There you can see the collection of notable examples of Islamic calligraphy, tiles and rugs as well as the ethnographic displays on various cultures in Turkey.

Next stop is the Topkapı palace, at the top of the list for every Istanbul visitor. This grand palace was the official residence of the Ottoman Sultans for almost 400 years, and it is also a UNESCO world heritage site. It was built on a huge scale with four courts and a Harem. Each part of the location presents the incredible islamic art, holy relics and history. The palace has a huge garden which also includes coffee and museum shops. There you can find souvenirs but also experience a professional shooting with your travelling partner dressed as Sultan and Sultana. Have in mind that lines for various exhibitions in the palace can be long, so you will need to dedicate the rest of the day to the Topkapı palace. Working hours go up to 4:45 pm during the winter time, and  6:45 pm during the summer time. 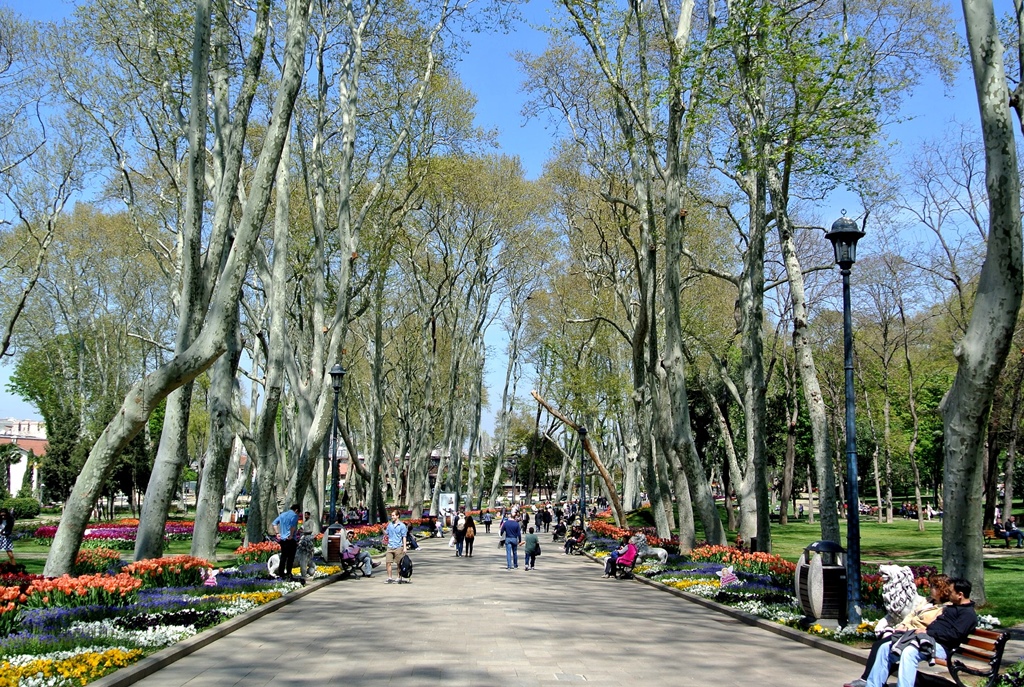 Round up your day with a dinner in some of the local traditional restaurants around the palace, and a dessert in a popular, traditional pastry shop Mado.

Start your day by visiting one of the most fascinating mosques – The Süleymaniye Mosque. It is the second largest mosque in the city, and one of the best-known sights in Istanbul. It is located on the Golden Horn, west of Galata Bridge. The mosque was built on the order of Suleyman the Magnificent by the architectural genius Mimar Sinan. Like in Sultanahmet, you will be able to enter the parts intended for tourists respecting the rules of islamic religion. 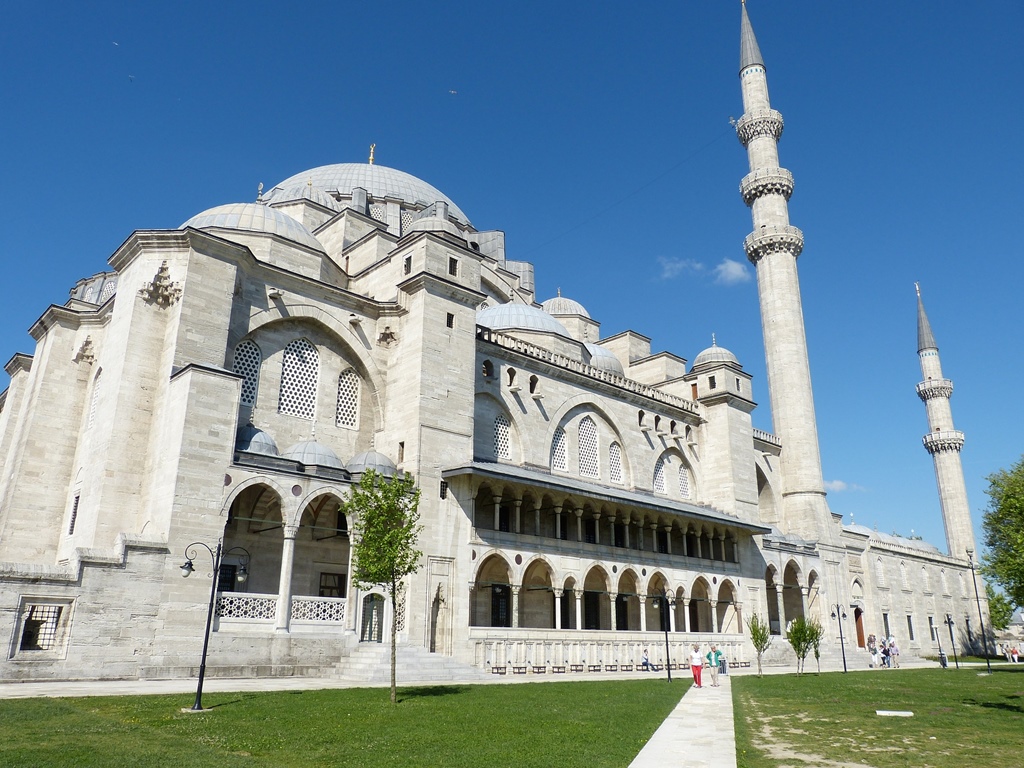 After this architectural wonder, while you are there, you can sign up for the most relaxing and unforgettable experience – Hamam. This part of town offers the oldest hamam which is now the biggest tourist attraction being the only one that allows men and women to bath together – Süleymanyie Hamam. This traditional bathhouse costs 40 € which you pay in cash, and the reservation should be pre-booked online.

This area offers numerous rooftop bars and restaurants where you can go and take a break enjoying the view.

To experience the essence of Istanbul’s traditional lifestyle, one must visit the old bazaars. First, get to the Grand Bazaar (Kapalıçarşı) by walking through the Fuat Pasa Caddesi. The market stretches roughly from west to east between the mosques of Beyazit and Nuruosmaniye. It is one of the largest covered markets in the world housing more than 3000 shops and definitely more than just a sightseeing spot. This place might feel like a labyrinth, so take your time since the prices are not fixed and it is all about good old bargaining. There you can find basically anything you want, from clothes, accessories, jewelry to utensils, rugs, souvenirs etc. 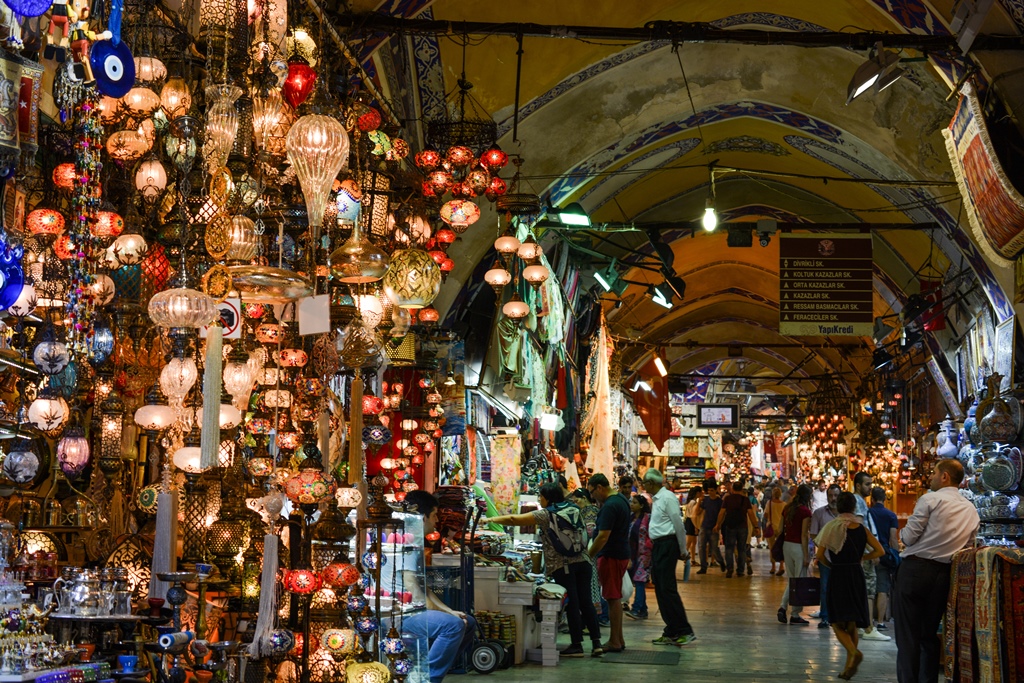 The next famous covered shopping after the Grand Bazaar is the Spice Bazaar (Mısır Çarşısı meaning Egyptian Bazaar). This market consists of 85 shops selling spices, Turkish delight and other sweets, jewelry, souvenirs and dried fruits and nuts. It wins the prize for being the most colorful, fragrant, and often the most fun because you can taste the goods on offer. Instead of going home with familiar tastes and fragrances check out for some exotic ones such as sumac, pul biber, çörek otu and saffron.

Note: to bargain like a pro remember these few things:

Both markets have spots for tea and traditional kebap, so you can sit there and take a break or simply round up your day.

After visiting all the attractions on the European side, it is time to cross the Bosphorus Strait. Often ignored by the tourists, the Asian side in fact contains a large number of worthy places. Take a ferry from Karaköy to Kadıköy using the aforementioned Istanbul Kart because seeing Istanbul from the Bosphorus is the essential Istanbul experience. When in Kadıköy, the best start is to explore the open-air market. You can spend some time browsing and shopping or simply relaxing in one of the place’s numerous pastry shops, cafes and bookshops. 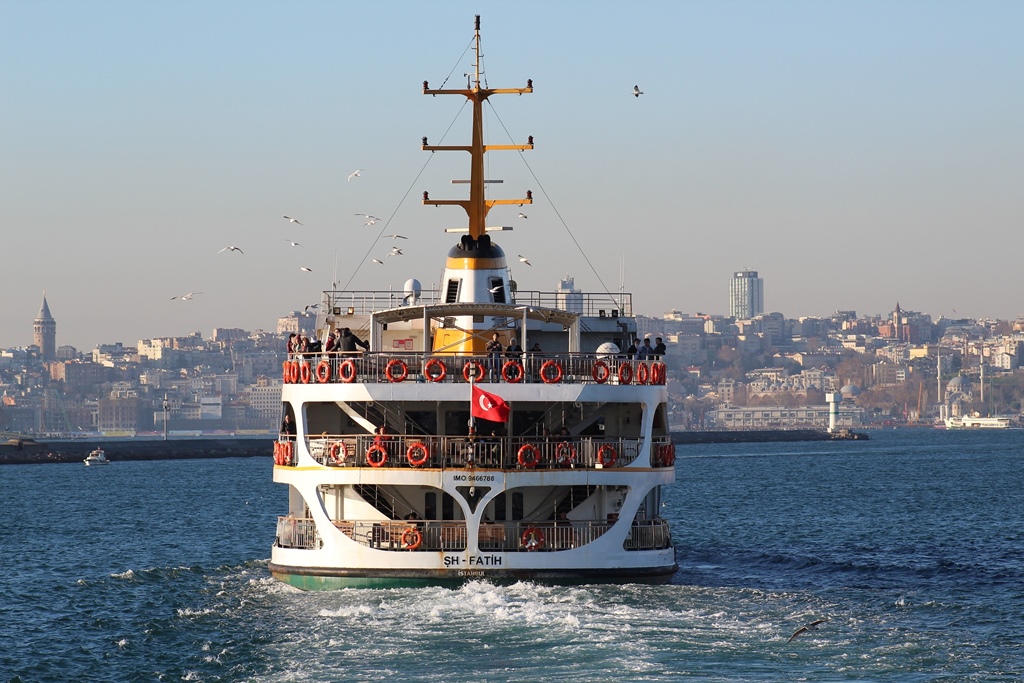 Ferry from Karaköy to Kadıköy

Consider taking a ride with the Nostalgic Tram which connects Kadıköy and Moda. The tram makes a loop so it’s a great way to explore the area.

After Kadikoy, one of the places worth seeing is Üsküdar district, once a Greek colony. You can reach it from Kadıköy by taking a taxi. Üsküdar is known for its many beautiful mosques, fountains, waterside mansions and palaces, the most famous of which are the Ostrorog House, Edib Efendi Mansion, Mihrimah Sultan Mosque, Beylerbeyi Palace etc. The area also served as a major burial ground throughout its history, and many large, impressive cemeteries remained.

200 meters (660 feet) from the coast of Üsküdar, on a small islet, rises the landmark image of Turkey today – The Maiden Tower (Kız Kulesi). It is featured in many pictures and paintings and since it has restaurants, bars and cafés, it can serve as a great place to relax or round up the day with one of the best views in Istanbul. 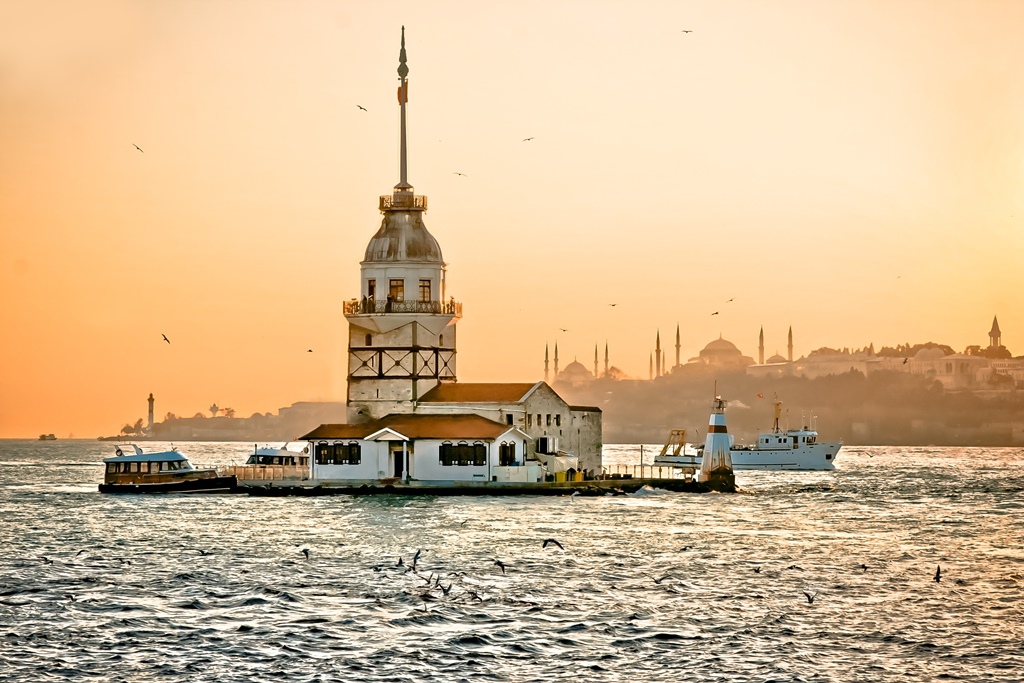