Athens, the capital of Greece and the historical gem of Europe, is one of the oldest cities in the world with a recorded history of more than 3,400 years. Classical Athens was a major urban city-state and is often referred to as the cradle of Western civilization and democracy. In modern times, Athens is a true metropolis and cultural, political, economic and financial center of Greece with a population of over 660,000 people.

There is just something special about Athens and its amazing ancient landmarks, delicious food and lovely people. Discover the most important cultural and historical attractions and catch the essence of all of Greece with our itinerary for Athens weekend break.

Start your Athens holidays with a visit to the Acropolis; the site opens at 8 a.m. and the best time to visit it is early in the morning so you beat both the crowd and the heat. This UNESCO site, built upon a hill watching over the city, is one of the most important monuments in human history. Tickets are available on-site as well as online and they are valid for the Acropolis and its Slopes. There are several admission-free days annually, for example every first Sunday from November 1st to March 31st, check the rest of them here. 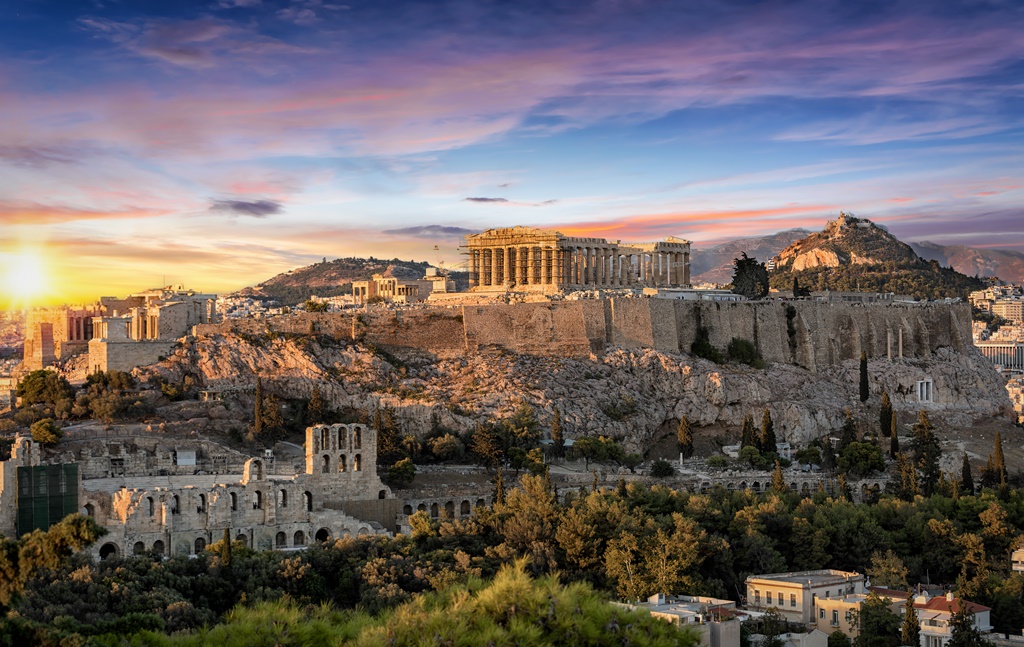 The largest and the most famous temple on the Acropolis is Parthenon, built in honor of the city patron Athena. Over the centuries, Parthenon has been used as a religious temple, a church, mosque and a fortress. Make sure you also visit other temples such as Erechtheion, famous for Caryatids sculpture, and the Temple of Athena Nike, the oldest structure on the hill. Check out two Ancient theatres placed at the base of the Acropolis, Odeon of Herodes Atticus, still housing performances, and Theater of Dionysus. 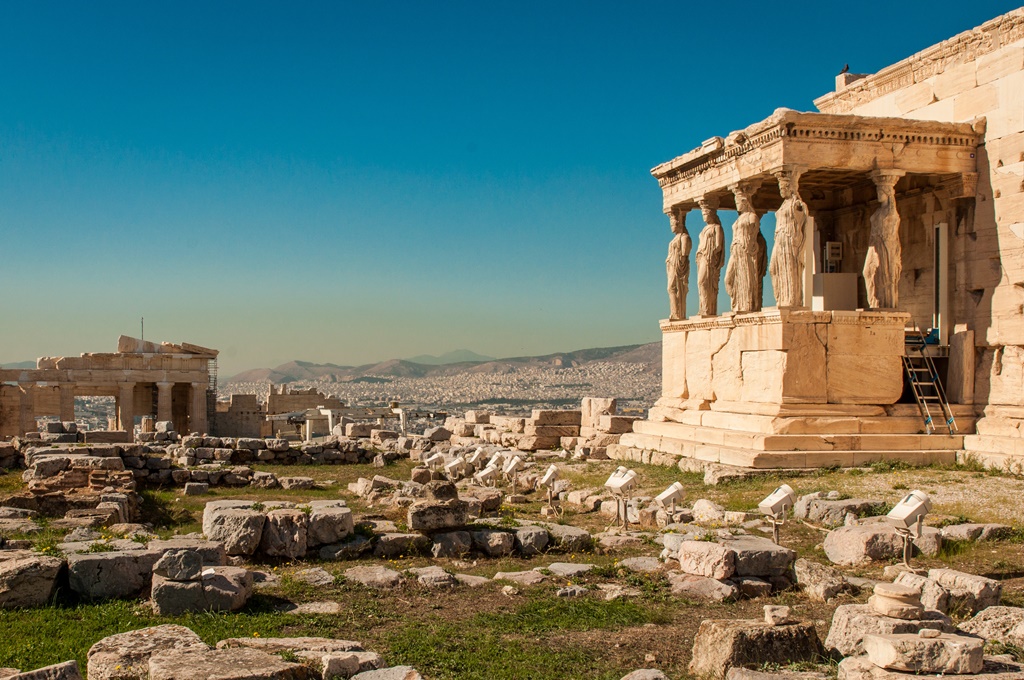 After the history tour, come back to present-time and visit Plaka, Athens’ most lively neighbourhood, located at the foot of the hill. This is the place to experience Athens like it used to be; discover the most beautiful corners of Athens walking down the narrow pedestrian streets with small cafes with lovely terraces and taverns serving homemade food. By the time you explore the area, you might get hungry so try some local food such as Greek salad prepared with tomatoes, olives and cheese or Souvlaki, pieces of grilled meat and vegetables. Both of the dishes are amazing low-cost meals. There is a wide offer of great restaurants, such as Vyzantino Restaurant, To Kafeneio and Scholario Ouzeri.

The afternoon is reserved for more sightseeing; in Plaka, you will find several interesting buildings and structures, like the Roman Agora, Fethiye Mosque, Library of Hadrian and the Tower of the Winds. Head to one of the top sites in Athens, Acropolis Museum, a modern museum showing sculptures and friezes from the Acropolis on 3 floors. Continue the walk to the Temple of Zeus Olympios, also known as Olympieion, the largest temple in Ancient Greece, built in the 6th century BC with 104 marble columns, of which 15 columns stand today.

When the sun goes down, join Greeks in their tradition of drinking Ouzo, the most popular anise-flavored dry liquor often served with olives and feta cheese. Get some rest during the night and prepare yourself for the second day!

People say that breakfast is the most important meal of the day and we couldn’t think of a better place to have a proper breakfast than Greece. You should try Koulouri, plain, round-shaped bread topped with sesame seeds, sometimes stuffed with olives or feta cheese that goes great with Greek yogurt topped with a bit of honey. Have a cup of Greek coffee, it is the same as Turkish, but they changed its name after Turkey invaded Cyprus in 1974.

After breakfast, you could join “This is my Athens” tour local people provide free of charge; they volunteer to show you some things you might miss as a tourist. Next not-to-miss site is Ancient Agora, ancient city center or “the place of gathering”. It was the place where citizens used to socialize, shop and talk about politics and today, it is a large park that homes the Temple of Hephaestus, probably the best-preserved temple of antiquity used until the 19th century. It is as magnificent as Acropolis but less busy.

After visiting the temple, head to Monastiraki, lively neighbourhood providing traditional atmosphere. Monastiraki Square is one of the meeting points in town with a diversity of buildings clearly showing a multi-layered mix of cultures; in the same time, you will be able to see pillars of Hadrian’s Library, Mosque of Tzistarakis and orthodox Church of Dormition of the Virgin Mary of Athens. In the area, there are also several ancient churches. Very characteristic feature of the neighbourhood is the market or bazaar, offering pretty much everything, from genuine art pieces to cheap souvenirs and imitations. The market works every day, besides Sunday, when it turns into a flea market where people sell all kinds of things; from old books and magazines, leather shoes and bags to collectibles. A short walk from it, you can find Athens Central Market, the best place to experience everyday Athens life. Locals rushing around in chaos is just a part of its charm. Here you will understand that Athens gastronomy and food scene is divided into two parts, meat part and seafood part, but you shouldn’t take sides, try it all. 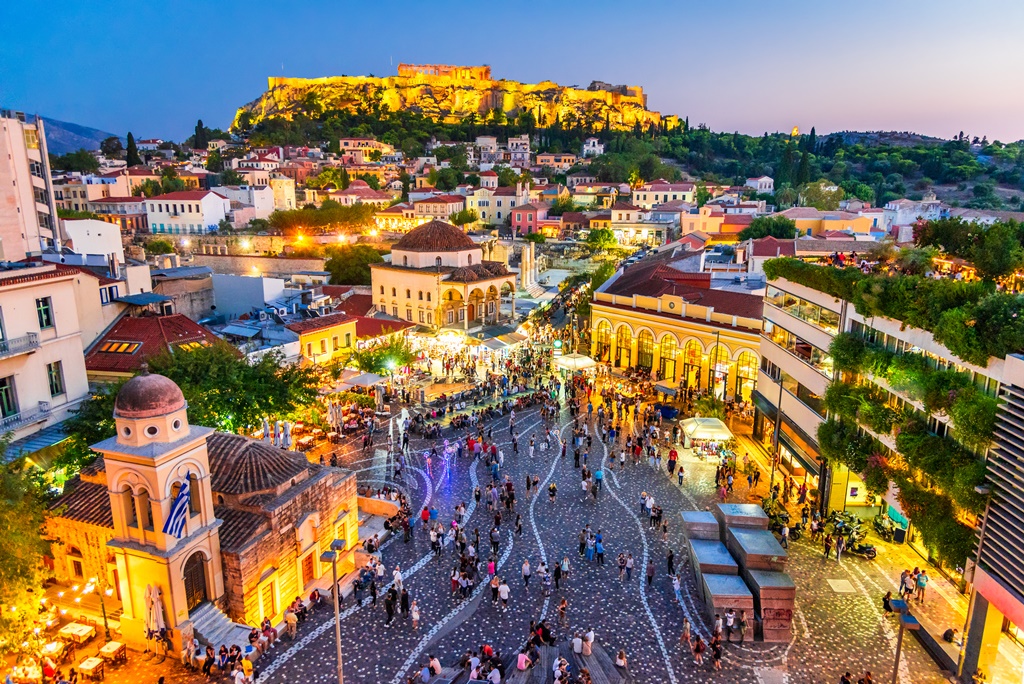 If you are exhausted from a long day of sightseeing, it is the time to choose between Athens bars and have a cocktail. The Clumsies is a buzzing spot, this two-floors bar with a vintage interior design is often recognized as one of the best bars in the world. Another luxury bar is Noel that will seem like  you just entered a different country. If you are into rooftop bars, don’t miss The Galaxy bar, offering both great views and expertly made drinks.

Start your last day at Syntagma Square, or Constitution Square, housing Greek Parliament Building, a former Royal Palace. While you are there, check out the Tomb of the Unknown Soldier, a war memorial dedicated to all unknown soldiers who gave their lives for the country. In front of it, the Changing of the Guard takes place exactly every hour; it is a ceremony where presidential guards dressed into traditional elaborate costumes do complex maneuvers and dance, all to pay tribute to the war victims. 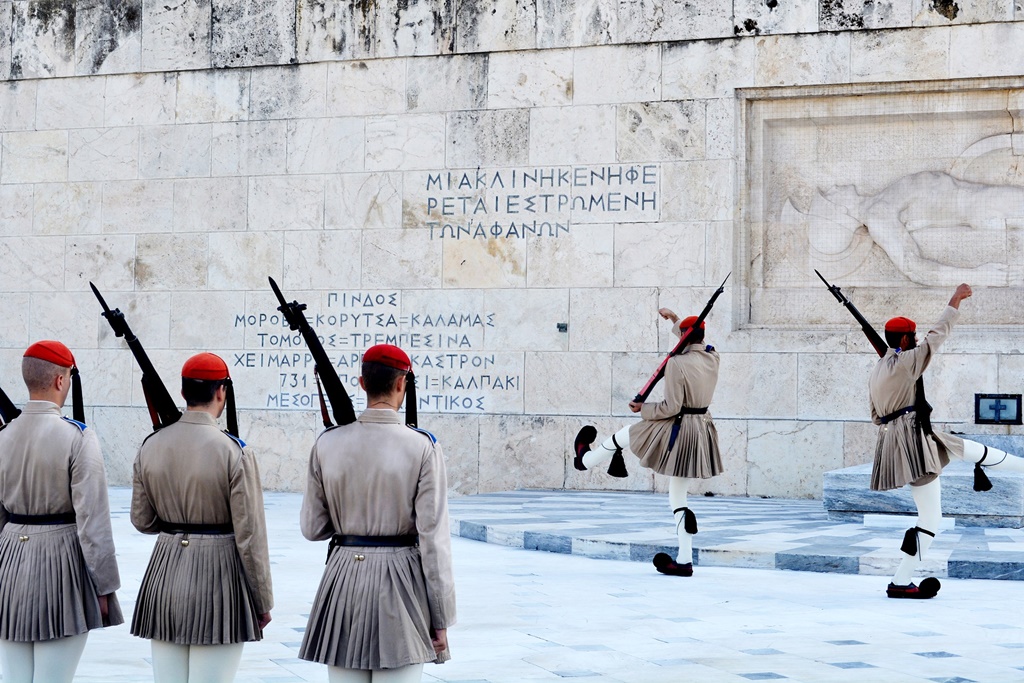 Just next to the Parliament lies the Athens National Garden covering over 20 hectares full of vegetation, rare plants and birds. Take a break in the green heart of Athens with 7,000 trees and 6 lakes. In case you are interested in seeing more of the animal planet, head to the Athens Zoo.

Your next stop is Panathenaic Stadium, the birthplace of the first modern Olympic Games in  1896 and the only stadium in the world completely built of marble. The site dates back to the 4th century B.C. when was used to host events and competitions of male athletes. It is also the finishing point of the Athens marathon. Run a lap around it and have your Usain Bolt moment.

When you are ready, head to Kolonaki neighbourhood, which is to Athens what Beverly Hills is to Los Angeles. This upscale neighbourhood, one of the oldest districts in town, offers elegant boutiques with high-end fashion, but also local designers shops. Voukourestiou Street is the most renowned and fashionable shopping street in the whole city and it is rather famous for its jewelry stores.

Lycabettus Hill is another Athens landmark presenting more or less a mass of woodland. Peaceful pathways lead to the peak with a traditional church and amazing views across Athens. You can also take the cable car to the top and enjoy the golden hour on the top with a lot less effort. When the night falls, we suggest returning to Kolonaki to enjoy the evening, our recommendation would be visiting Jazz in Jazz, a tiny place with intimate settings and best musicians in town. 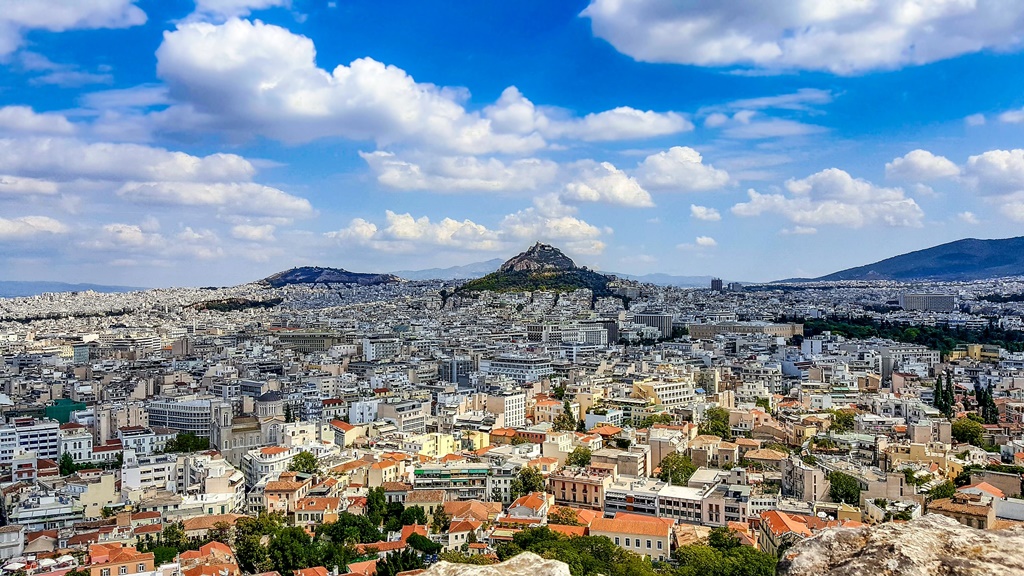 In case you decide to stay a little bit longer and wonder what to do, you could spend a day on the coast and discover the Athens Riviera, urban landscape a few kilometers outside the city with nearest beaches, 5-star resorts and marinas. Emerald green water and sandy shore are very inviting, and in case you want more than just swimming, you can choose among different sea sports, sailing and even golf.  In the evening, the coast’s nightlife is spectacular; beach bars are always full of people drinking cocktails and dancing until the morning hours. 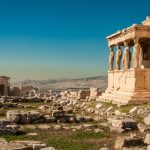 Another option would be a visit to the islands closest to Athens that can be reached within 2 hours from town. Three ports, Piraeus, Rafina and Lavrion, connect Athens with the islands and make a quick island getaway more than possible. The most popular boat trips are the ones to Saronic islands, including the island of Hydra, Poros and Aegina. Rent a bike or a scooter, discover hidden coves and dine at lovely restaurants.