Aah, the majestic capital of Greece! The cradle of European history is one of those cities you should visit at least once in a lifetime. And although to some the city may look “uneven” due to ugly concrete apartment blocks mixing with gracious ancient monuments, we would still say that Athens will leave you speechless nevertheless.

So you have just 24 hours in Athens at disposal? No worries, just check out our detailed one-day guide and make the most of your day!

8AM – Breakfast in Athens

Since breakfast is the most important meal of the day, it is necessary to get a great source of energy before starting an all-day tour of Athens (or any other larger city in that sense). While in Greece, try to experience and taste their culture in any possible way. So why not start with typical Greek breakfast? If you prefer something light in the morning, go for Greek yoghurt. It is known for its creamy texture and it has good probiotic qualities. It goes perfectly with fresh fruit, a bit of walnuts and some honey.

For those who prefer rich breakfast, we recommend scrambled eggs or an omelette topped with feta cheese and veggies (e.g. zucchini, bell peppers or tomatoes). And instead of classic white bread, go for Greek olive bread. A winning combination, for sure! In case you don’t have time to prepare your own breakfast, check out some of the cool breakfast places in the city centre such as: Coffee Joint, BiteBox, Pantheon, Happy Blender or Telaro. 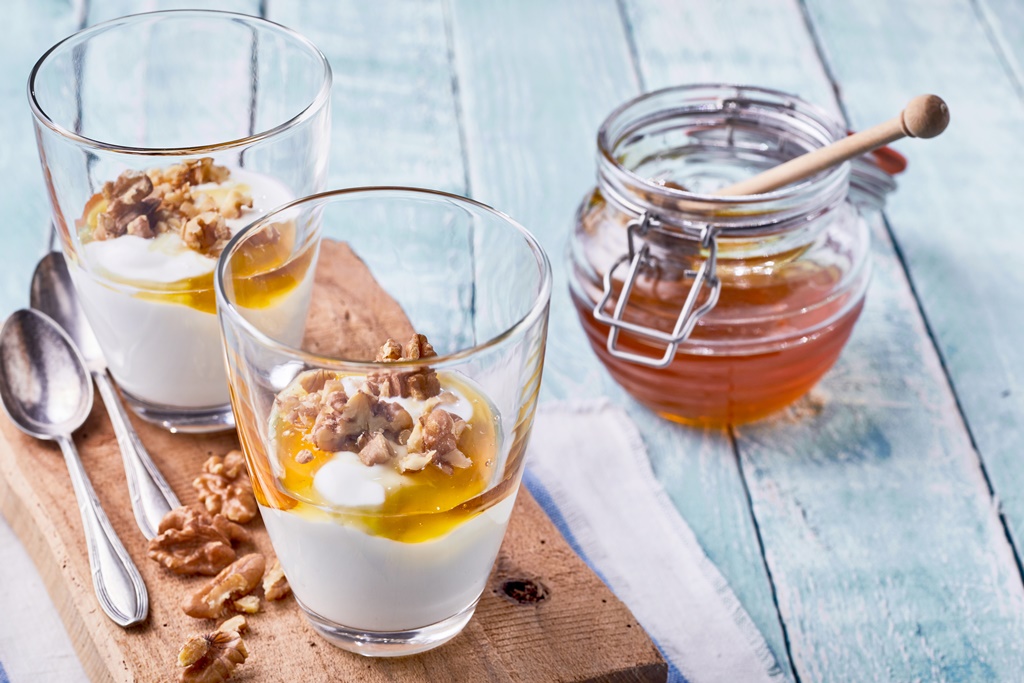 One can’t visit Athens without going to the Acropolis. Best time to go is in the morning since a visit to this historical site will take away at least 3 hours of your time. When buying a ticket for the Acropolis, we suggest buying a combo ticket. Combined tickets are valid for one admission per site to Acropolis and Slopes, Ancient Agora, Roman Agora, Hadrian’s Library, Olympieion, Kerameikos, Aristotle’s School (Lykeion). Since the stones on the hill are uneven and slippery, make sure to wear comfortable flat shoes (sneakers would be the best option) and bring plenty of water, especially if you are visiting in the summer.

The main attraction of the Acropolis is by far the iconic Parthenon. This ancient temple stands on the highest point of the hill. Notice how the columns are slightly wider at the foot and narrower at the top. This technique creates the optical illusion of a perfectly balanced building. If the columns were of the same width from top to bottom, the temple would appear heavy. Beside Parthenon, here are other significant sites on the Acropolis: 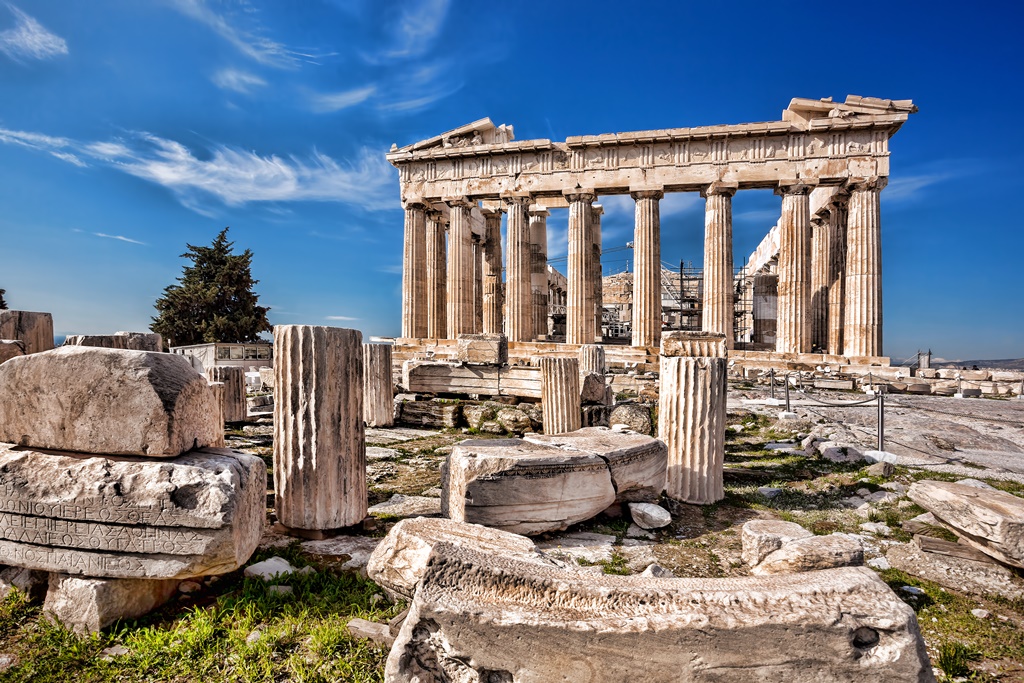 After doing a tour of the Acropolis, head to the Acropolis Museum which is located by the southeastern slope of the hill. This archaeological museum displays every artefact found on the Acropolis hill and its surrounding slopes. The museum was founded in 2003, however it opened 6 years later when nearly 4000 collected objects were ready to be shown to the public. One fun fact about this stunning museum is that it boasts the title of being the largest modern building in Athens erected that close to the historical site. Summer admission fee for the museum is €10, while winter fee costs only €5. Inside the museum, visitors can buy souvenirs from the gift shops or have a cup of coffee or lunch with an amazing view of the ancient Acropolis. Buy the ticket in advance on the official Acropolis Museum website and skip the long waiting lines. 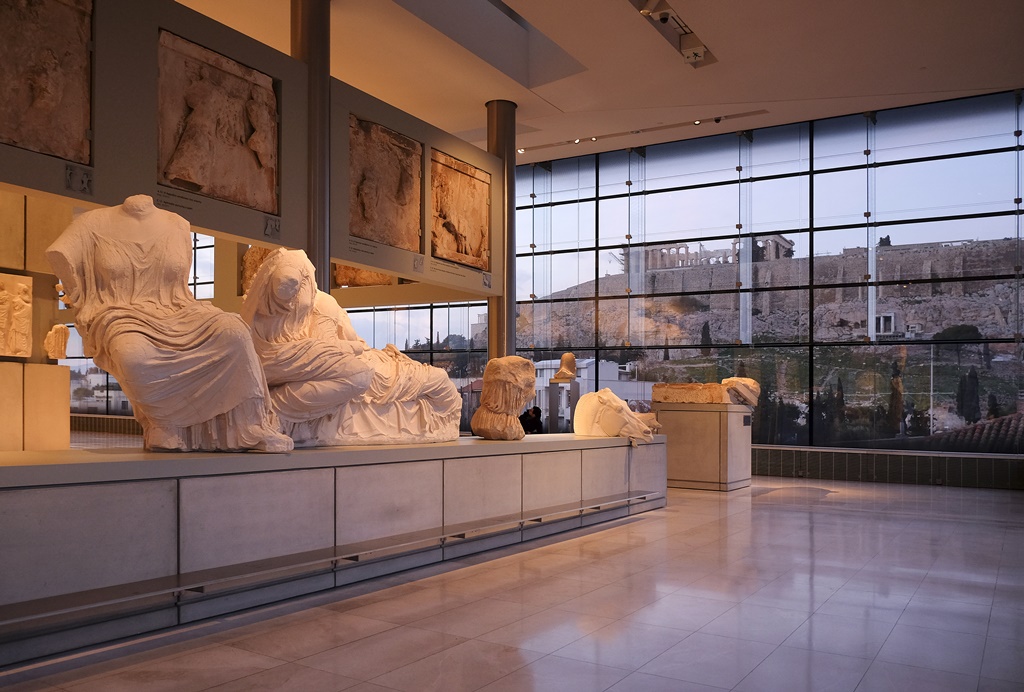 Next stop on your one-day in Athens itinerary is Temple of Zeus. Only 6-minute walk from the Acropolis Museum are situated the ruins of a former colossal temple. The temple was completed during the rule of the Emperor Hadrian in the 2nd century AD and at that time the temple, which had 104 colossal columns, was the largest temple in Greece. Visiting the ruins of temple won’t take too much of your time and you can get a great photo for your Instagram feed. We call it a win-win situation!

Since your day is packed with activities and the goal is to get the most of Athens in one day, it would be best to get something quick. This means it’s time to try some of the famous Greek street food! You can choose from a variety of Greek and Middle Eastern dishes (especially Turkish). Whether you are a meat lover or vegan, you can easily find a quick bite which will keep you full until dinner. Here are some of the dishes you should definitely try: 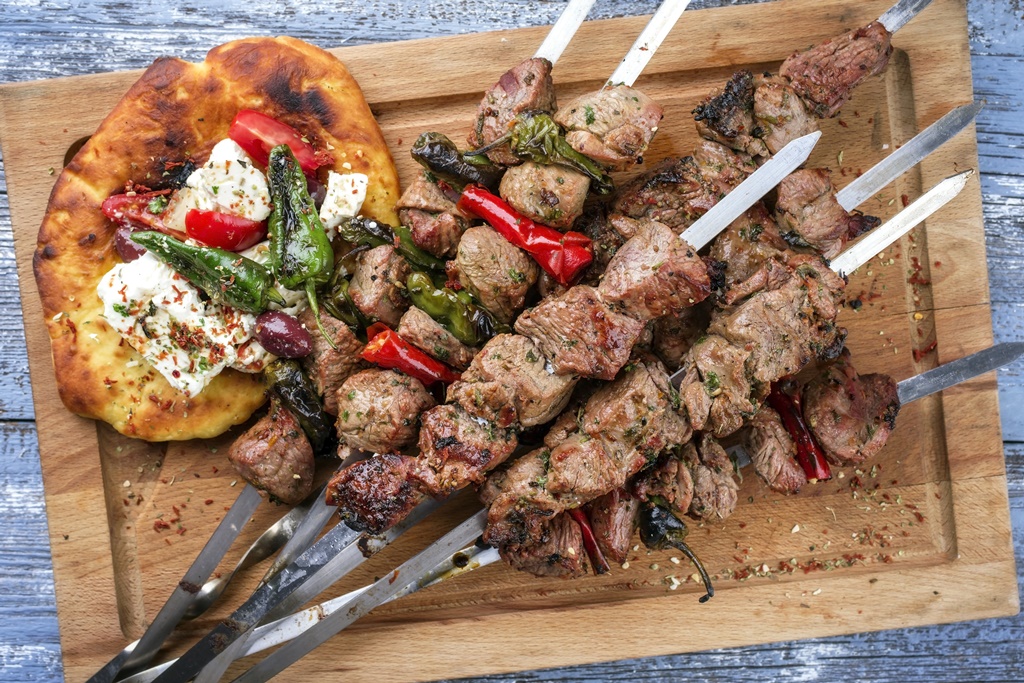 3PM-5PM: Plaka and Tomb of the Unknown Soldier

Plaka is the oldest part of Athens and most of the streets inside this part of the city are closed for traffic which means you can explore the area at your own pace. Due to its proximity to the Acropolis hill, it is practically impossible not to visit the area while staying in Athens. This picturesque neighborhood will amaze every tourist with its small, narrow streets, cute souvenir shops and traditional taverns with delicious local specialties. In Plaka you will find many museums which are definitely worth the visit. You can choose from the following:

Don’t miss the Roman Agora, the first commercial center of Athens which consists of a large patio surrounded by columns. During the Byzantine period and the Turkish occupation the area which was once the Roman Agora, at that point in time it was covered with houses, workshops and churches including the remaining Fetiye Mosque. Once the private houses were demolished, historical excavations were carried out. 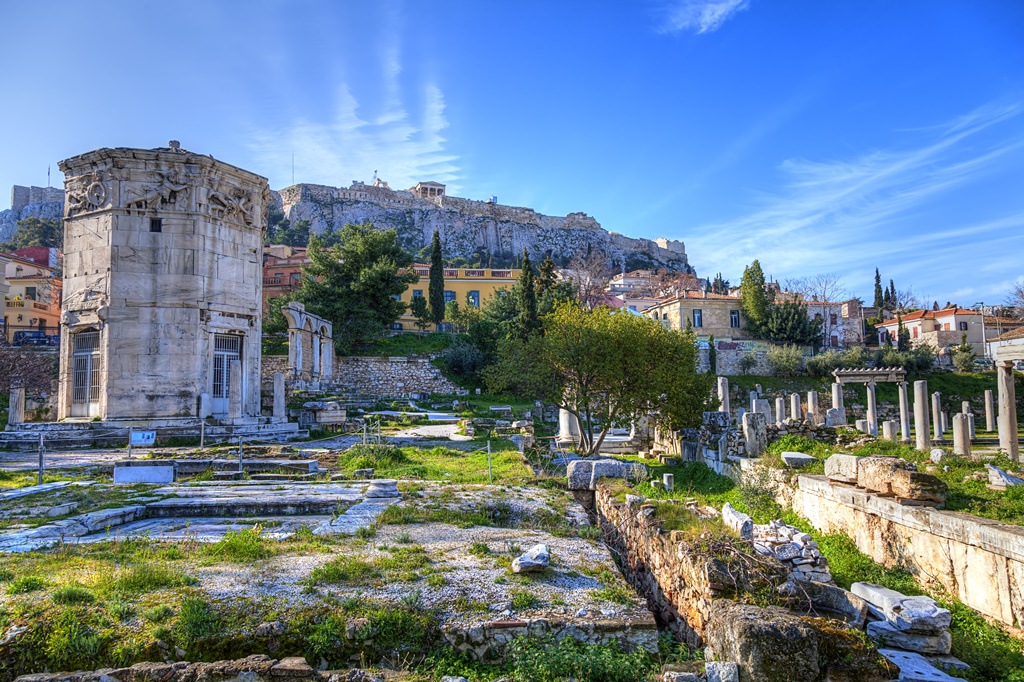 The title for the most unique part of Plaka goes to Anafiotika. This place doesn’t even look like a neighborhood in Athens – you might think you are visiting one of the iconic Santorini villages. The thing is that the neighborhood was built according to traditional Cycladic architecture (mostly found on Greek islands nowadays). Houses are tiny and shaped as a cube, streets narrow with white stairs. Idyllic spot for a memorable photo, would you agree? 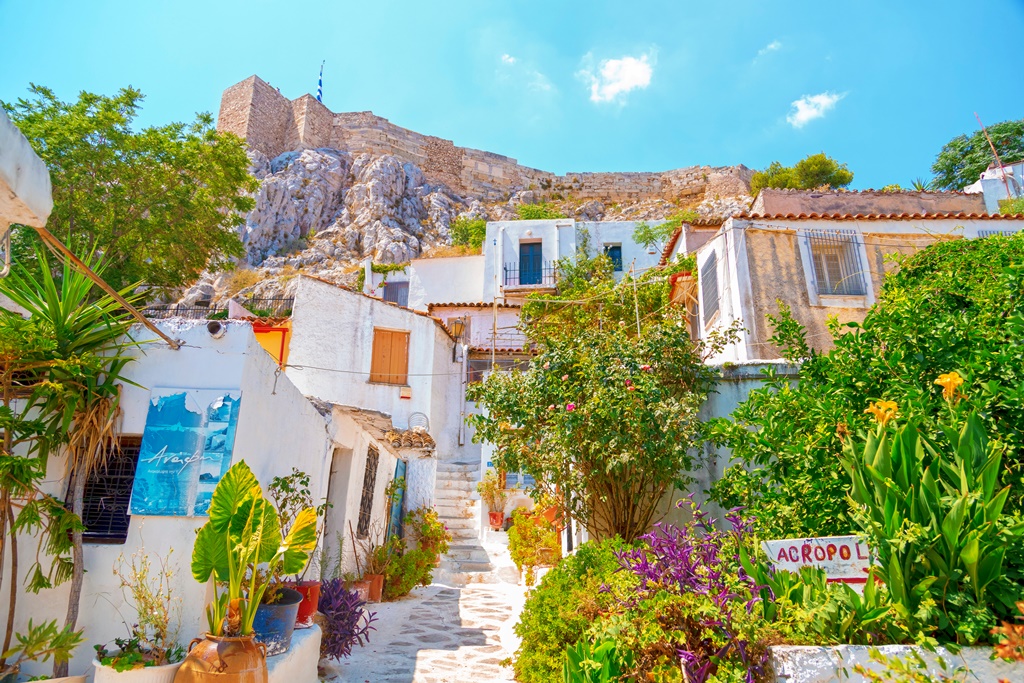 Before heading to the National Garden and Panathenaic Stadium which will be the last stops of your one-day visit to Athens, spare 20 minutes to stop by the Tomb of the Unknown Soldier. The traditional costumed evzones (guards) stand by the tomb and change every hour on the full hour regardless of weather, day, season or situation. So try to be there precisely at 5PM so you don’t miss the change of the guards!

5PM-7PM: The National Garden of Athens and Panathenaic Stadium

After a long day of sightseeing and crowds, we recommend you end your daily tour with a visit to the National Garden of Athens. Before it got the title national, the garden was called the garden of Amalia. Who was Amalia, you ask yourselves? She was queen consort of Greece from 1836 to 1862 as the wife of King Otto.The queen herself took care of the garden at least three hours every day. On top of that, she also planted (nowadays) 25-metre-high palm trees which can be seen  when entering the garden from the gate on Vasilissis Amalias Avenue. 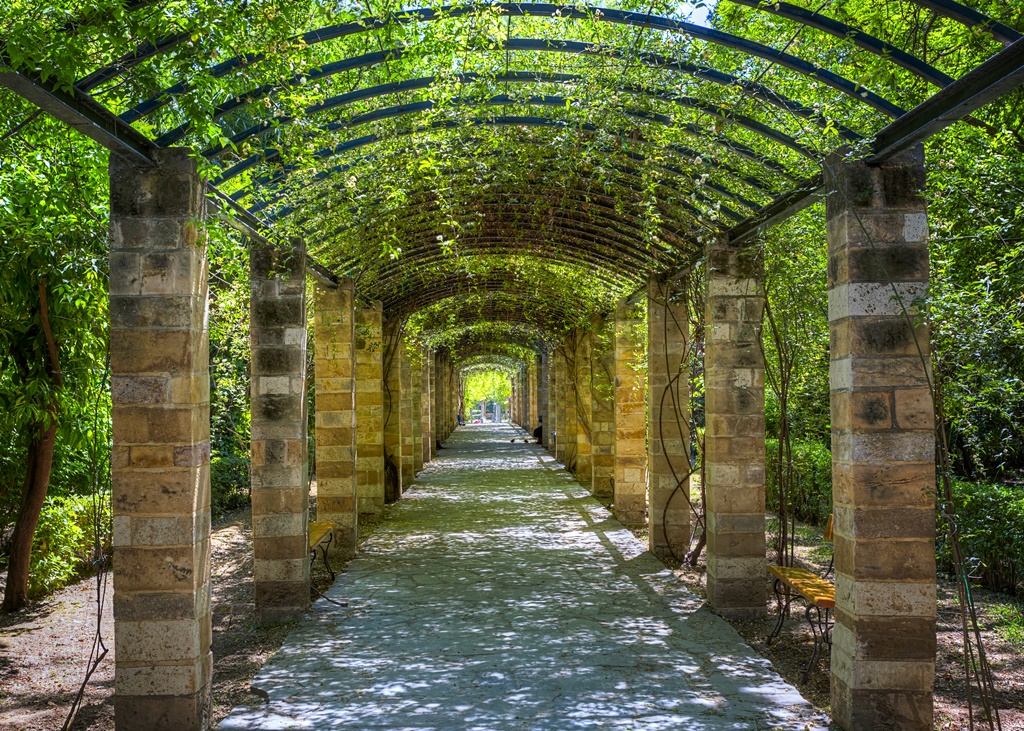 The National Garden of Athens

The National Garden is characterized by its narrow labyrinth paths, the wooden benches and the small lakes. There’s also a small zoo, a botanical museum, a playground for children and a cafe bar with tables outside so you can enjoy your coffee while being surrounded by stunning nature. Visitors also love the duck pond, where you are allowed to feed the ducks with small pieces of bread.

And a treat for the end, Panathenaic Stadium, also known as being the only stadium in the world to be entirely constructed of white marble. And not only that – the first modern Olympic Games in 1896 were held exactly at this stadium. The admission fee for the stadium is €5 (€2.50 for students and retirees) and includes audio guide in 11 languages. A pro tip: For an amazing photograph, climb to the upper tier of stand 21, from where you can capture the Acropolis, the Parthenon, Filopappos Hill, the Temple of Olympian Zeus, Zappeion, the National Gardens and Lycabettus Hill. And if you have more energy left, you are free to go for a jog around the stadium, but the proper footwear is required.

Finally, time for some rest! Treat yourself with a delicious Greek specialty in one of the traditional Greek restaurants. Here are some of our top picks for an evening meal:

Vibrant Psyrri neighbourhood is a perfect pick if you are looking for an idyllic and cozy ambient. The neighbourhood is centered on Iroon Square and its eateries offer meze and live music, including rembetika (Greek blues). Bars with DJs stay open late, as do tavernas serving traditional specialties. 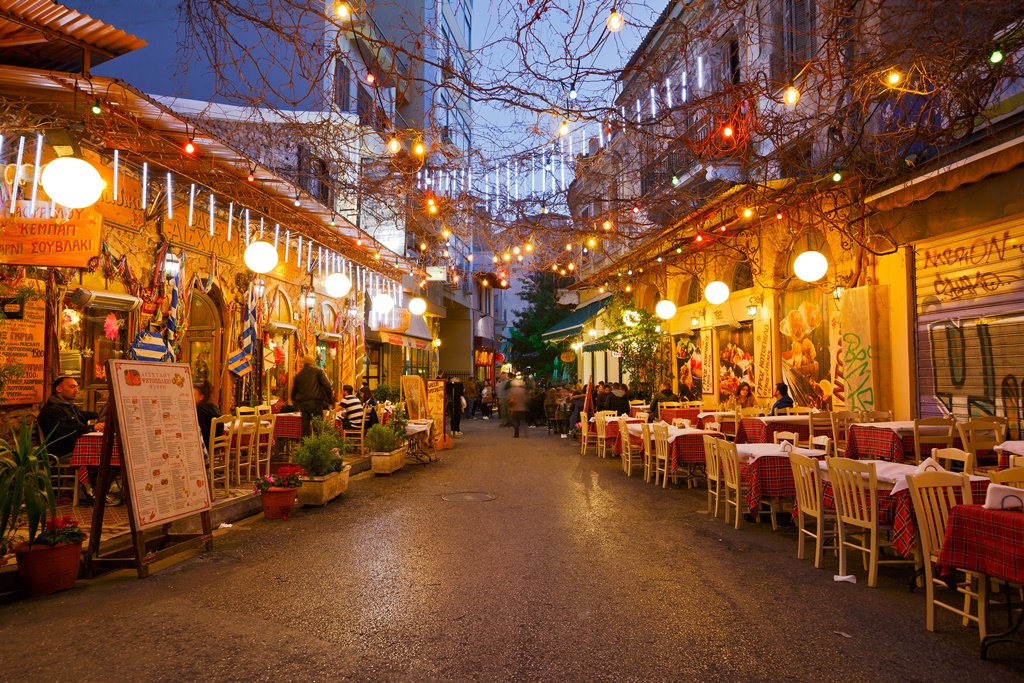 For an extra experience, you can book a dinner for the Dinner In The Sky restaurant. This project, launched in Brussels back in 2006, Dinner in the Sky, started its operation in Athens in 2015. Since then it has had more than 21 000 guests from all over the world. It consists of a 6-course menu, served at 40 meters up in the sky, in that way offering the most spectacular view of Athens and a perfect closure for a one-day trip!