While everyone is trying to book a flight to Split or Dubrovnik, Zadar offers an opportunity to explore the lesser known (and therefore less crowded) part of the Dalmatian coast. That being said, despite being only the fifth biggest town in Croatia, Zadar has much to offer in terms of both of historical attractions and beautiful nature. If you are still not convinced, you should know that Alfred Hitchcock reportedly described the sunset in Zadar as “the most beautiful sunset in the world”.

By Plane: Zadar airport is well connected to other major Croatian and European cities. Flying to Zadar can be quite budget friendly as well, considering the fact that you can choose to travel with a low cost company such as Ryanair, which offers many flights to Zadar, especially during the summer months.

If you are arriving to Zadar by plane, it is useful to know that there are airport buses approximately every 30 minutes after the arrival of a scheduled flight. The first station of the airport bus is the bus terminal in Zadar, and afterwards the bus continues to the city center.  For more information regarding the airport bus, check here:

By Train:  As trains in this part of Croatia move very slow, getting to Zadar by train is only an option if you insist on travelling by train. If you do so you will arrive at the railway station which is next to the main bus station.

The main bus station in Zadar is located at 1 Ante Starcevica street; the exact location on the map can be found here. To get to the city center from the main bus station, you can use the bus lines nr. 2 and 4.

By Ferry: For those who prefer to travel by ferry, the only way to reach Zadar by ferry is from Ancona. The ferry port in Zadar is about 3.5 km away from the city center. You can reach the old town from Gazenica ferry port by bus line nr. 9.

Public transportation, getting around in Zadar

Buses Zadar: Zadar is well connected to the other cities in the country and region, and also has 12 public bus lines which cover the whole city. You can find all the information about buses in Zadar here.

Taxi: The parking spaces of local taxi service can be found near the bus stop on Liburnian coast in the harbor, at Zadar bus station and near the bridge on Branimirova obala. You can order a taxi service by calling the number: 00385 (0) 23 251 400. The prices vary from 19 to 45 HRK for a ride up to 5 km, however, it would be best to check with the taxi driver directly on the spot.

If you are staying in Zadar for only one day, here are some recommendations for the things that you definitely should not miss:

Zadar Riva: A sea promenade Riva is a perfect place to start your exploration of the city. You can stroll down the sea or sit on the bench or in one of the several nearby cafés and take in the atmosphere of the charming old town.

Sea Organ: One of the most well-known attractions of Zadar is the Sea Organ, an award winning art installation located precisely on the promenade. Here you can listen to the relaxing music created by the ocean and the sea. 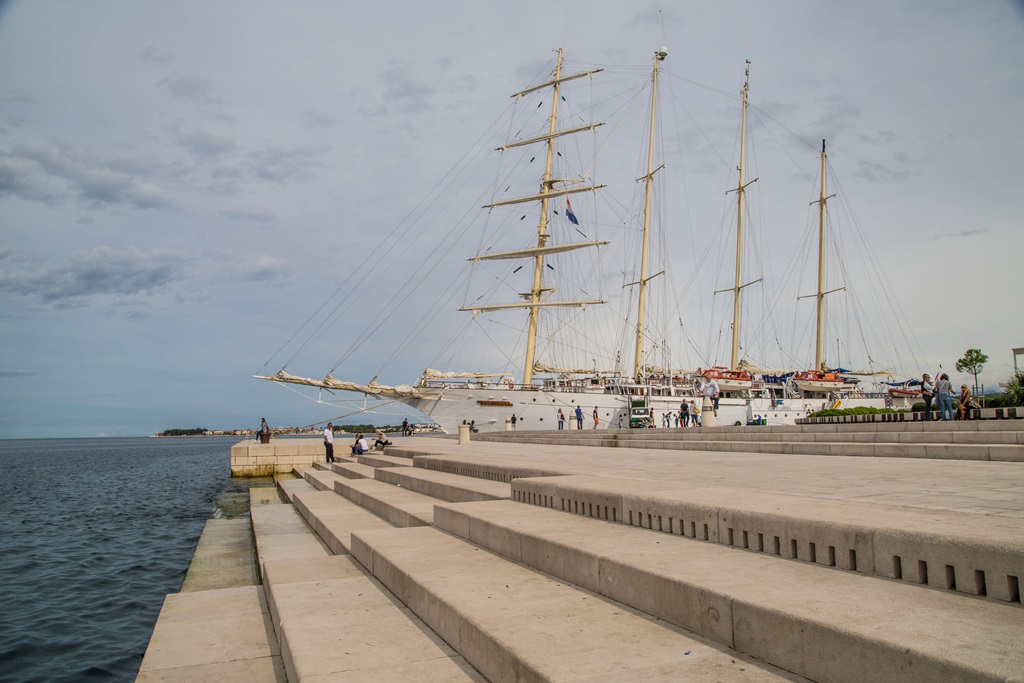 Greeting to the Sun: There is another art installation nearby, and you might want to wait until it gets dark to see this one: during the day, this 22-metre disc collects solar rays and shows them off as light patterns after sunset.

The Forum and St Donatus Church: The Roman Forum, which was built from the 1st century BC to the 3rd century AD is in the center of the Old Town. The biggest attraction on the Forum is certainly St Donatus Church, which is the symbol of Zadar. 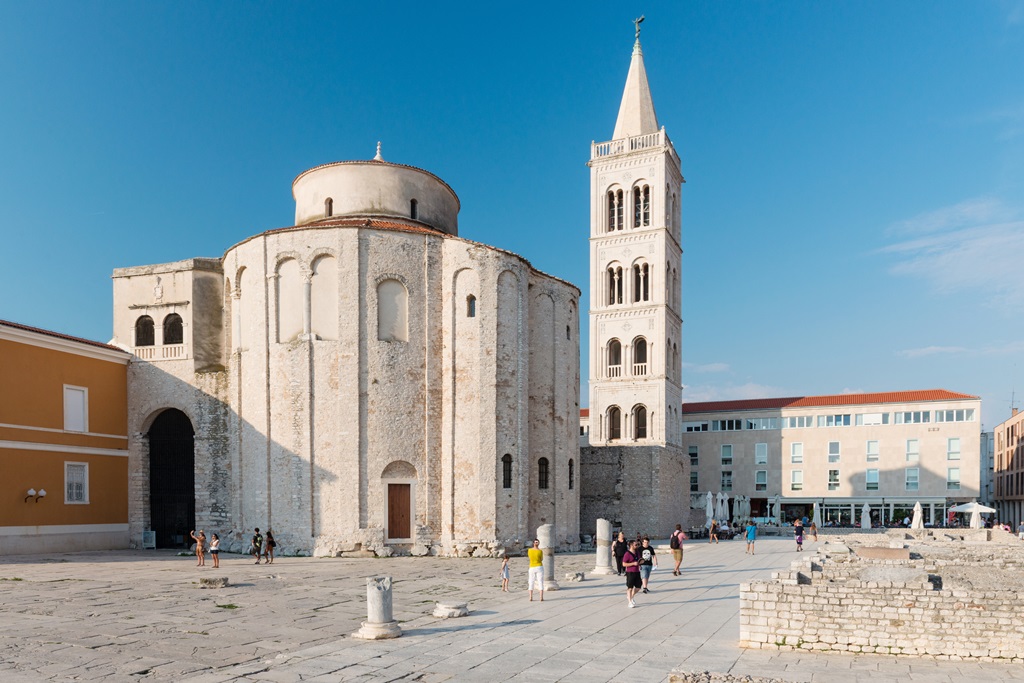 Kalelarga: Kalelarga is perhaps the most famous street in Zadar, and the name literary translates to “Wide Street”.

Zadar offers many possibilities for day trips: you can visit other cities in the region, such as Split or Šibenik, you can enjoy in the beautiful beaches on nearby islands Ugljan or Pag, or you can also visit some of the national parks in the area, such as Krka waterfalls, Plitvice Lakes, or Kornati islands. You can find more about popular day trips from Zadar here. 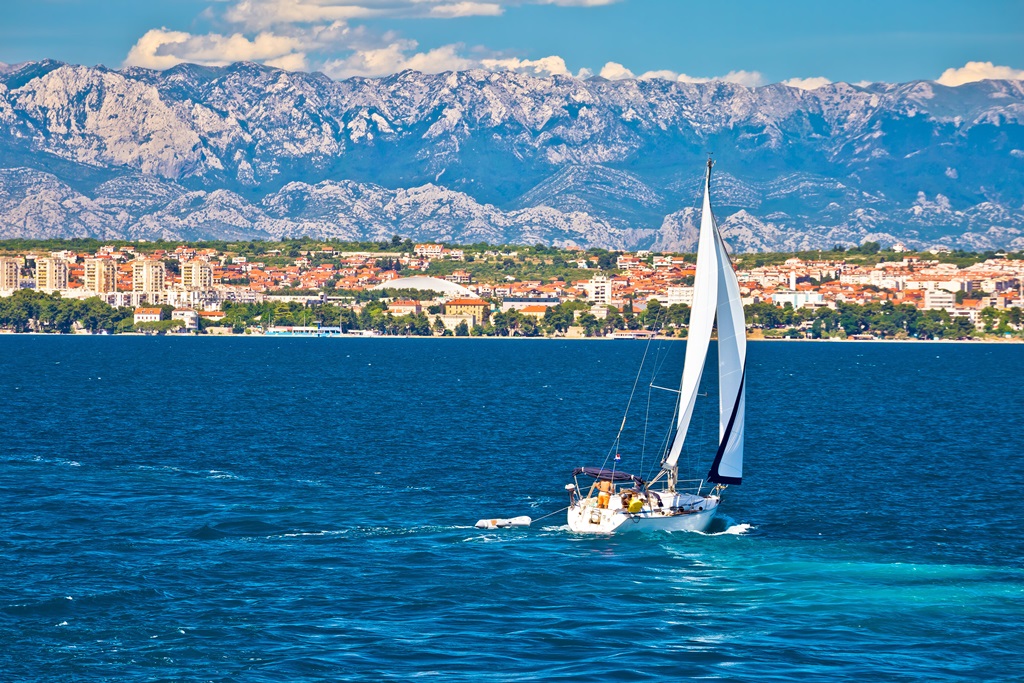 What makes the beaches in Zadar so special is the variety of the seashore: there are various sandy and pebbled beaches here, which means that everyone can find something for himself. To mention but a few, you can visit:

Kolovare: Kolovare, the proud receiver of the famous international Blue Flag (implying the crystal clear sea)  is a favorite beach among the locals, probably due to the fact that they can go to the beach without having to leave the city center. Kolovare can be reached in only 15 minutes’ walk from the Old town. Among other facilities, there is a popular beach bar there where young people gather, usually during the evening.

Borik: Borik is considered to be the main beach of Zadar, and is also most popular with tourists. One of the reasons for this popularity are the additional services it offers: here, you can rent water bikes, or even go water skiing and windsurfing if you are feeling particularly adventurous. The beach is located about 4 kilometers from the city center. It has both pebbled and sandy area, so you can choose whichever you prefer.

Zrce: And finally, the last but not the least to mention is the beach Zrce. It is actually located in Novalja, which is an hour and a half bus ride from Zadar, and it is definitively worth the hassle. Also known as “the Croatian Ibiza”, this beach has everything you could wish for if you are a party lover, because it contains numerous clubs for young people which are open non-stop.

Before heading to a night club, young people in Zadar (and also in other towns in Croatia) usually gather together in one of the cafés in the Old town to have a drink or two. At night, many of those cafés are transformed into night clubs. One of the favorite places to go is the Garden, an outdoor bar where you can relax and have a drink while listening to jazz, latin or electronical music. Garden’s super-comfortable loungers make it the perfect place to rest after a long day of sightseeing. Another popular bar nearby is Arsenal, which is located in a former warehouse, dating from the 18th century. During the day, Arsenal is a laid back coffee shop which later transforms into a nightclub. At the weekends, it offers live performances of some of the most popular Croatian singers. Another place not to miss is Ledana, both a lounge and a night club. Ledana’s beautiful setting in the middle of 200 year old park and its exceptional cocktails are likely to satisfy even the most demanding of visitors.

Zadar has much to offer even to those who prefer a more active vacation. You can go kayaking around the coast of Zadar, cave exploring, and also cliff jumping if you are in for an adrenaline rush. Therefore, if you are an adventurous type there are many options for you to choose from. However, do not worry: safety is an important concern for all those who organize such activities, and the majority of them are also suitable for children, so it can be an unforgettable family outing. For those who prefer exploring the city on bike, there are many bike rentals available. You can also go to a bike tour of the city, where you can visit all the main sights and attractions accompanied by the local guide. There are no special hiking trails in the city of Zadar, however, Zadar is a perfect city to explore by foot: you can take a nice walk along the coastal trail and enjoy the view of the sea, as well as of some of Zadar’s famous sights. The rock climbing fans who would like to level up their active vacation can explore the national park Paklenica, since it is the most popular rock climbing center in Croatia. It offers a good range of climbs to accommodate visitors of various climbing abilities and is suitable for both beginners and more experienced climbers.

If you find yourself in search of a shopping mall close to the city centre, City Galleria is the place to go. It offers a good variety of shops where you can purchase clothes and shoes, as well as drugstore and tech items. There is also a market there where you can pick up some fresh groceries, and a coffee shop where you can make a break from shopping and enjoy your drink. If you are a fashion enthusiast and would like to explore the local designers, Boutique MAR&VAL right next to the People’s Square is the place to go; there you can find clothes signed by established Croatian brands. If you only wish to know where you can do your grocery shopping, it would be best to go to Interspar, Lidl or Kaufland; they are both about 10 minutes car drive away from the city center, but they offer the best value for money. Alternatively, you can go to one of the several Konzum stores; they offer somewhat less variety than Interspar or Kaufland, however, there are closer to the city center and therefore can be more convenient.

Hospital: The ambulance in located about 1,5 km from the city center, and the number to call in case of emergency is: 194.

Dentist: Unfortunately, there is no emergency dentist in Zadar. If your condition does not allow you to wait for a dentist appointment, you should go to the ambulance instead.

Pharmacy  / 24 hour pharmacy: There are two 24 hour pharmacies in Zadar. One is called Donat, and the other one is Zadar. One week Donat is open non-stop, and the alternative week Zadar is the place to go in case of an emergency. Both pharmacies are located in the city center, close to the People’s Square.

Police (Numbers to call, police stations): The police station is located about 2 km from the main bus terminal in Zadar. The number to call in case of emergency is 192.

When you arrive in Zadar, there are plenty of exchange offices to change your money in, some of them right next to the bus terminal. Besides exchange offices, you can also change your currency in banks and in post offices. However, they are not open 24/7 so later in the day look for an ATM. Also, if you withdraw cash directly from an ATM it is likely that you will receive the best deal in terms of exchange rates.

It is also important to always select that you wish to be charged in Kuna, which is the local currency. If you choose your own currency when withdrawing money, the higher exchange rate will be applied.

Regarding credit cards, please be aware that you need a four-digit pin to use an ATM in Croatia.

If you are travelling by car, you should know that parking is limited in the Old town, which is mainly a pedestrian zone, so you would be best to leave your car in one of the parking spaces along the city walls. Please be aware that if you leave your vehicle unattended and parked at the wrong place, there is a big chance that your car will get towed away.