Mix the influence of Asia with the looks and culture of Europe and you’ll get – Georgia! This unusual but very charming country may not be your top pick for next travel destination. However, we’re here to change your mind and give you eight great reasons why Georgia is worth the visit!

If you’re looking to visit a wallet-friendly city, then Tbilisi has to be among the top 5 capitals where spending money won’t leave you broke for months after the trip. For example, a night in a hostel in the Old Town can cost you merely €8. When it comes to public transportation, a single bus ticket is so cheap that you probably won’t find it cheaper anywhere else! (costs only 50 tetri which would be less than €0.20!!). And when you add to that the fact that most of the monuments are free of charge and that museum tickets cost €2-3, it is pretty obvious that Tbilisi really is a cheap destination. 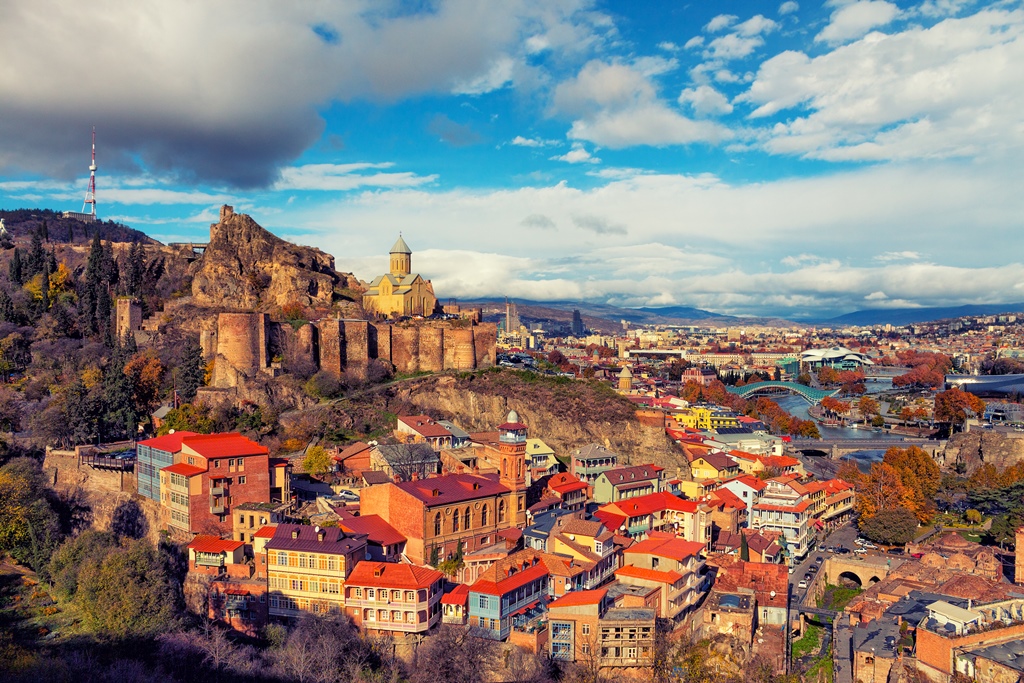 One of the oldest wine regions

You thought that best wines can only be found in France? Well, you are wrong! The fertile hills of the Transcaucasia were used for grape cultivation almost 8000 years ago. One of the best known wine regions is Kakheti region which is nowadays the most visited region of Georgia. The research team from University of Toronto found excavations in Georgia that indicate that Georgia really was the first country to make wine. To be more precise, they have found pieces of clay jars used for serving and storing fermented beverages. To make this fact even more interesting, UNESCO decided to add  the ancient winemaking method to the UNESCO Intangible Cultural Heritage List. 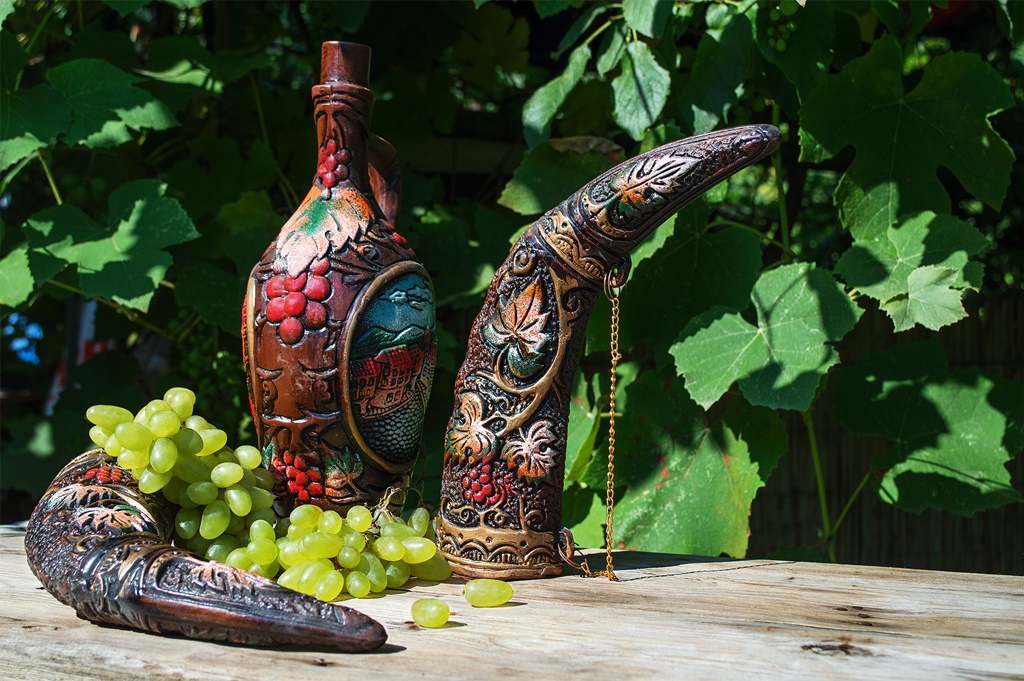 Get the taste of Georgian “supra”

If you’re fan of meat and cheese then Georgian cuisine will definitely amaze you. Georgians are known as meat lovers, they love it so much that they even have a variety of meat soups such as kharco (beef, tomatoes, herbs and walnuts), chikhirtma (chicken and eggs) or bozbash (lamb meat with peas, chestnuts and tomatoes). Those are just some of the options if you’re looking for something “light”. Don’t miss to try Georgian kebab called Lyulya made out of minced meat and served with tomatoes and pomegranate. Unusual but delicious combination! Vegetarians will enjoy the national dish called khachapuri. It’s very simple dish but quite tasty – a crusty cheese-filled (usually with sulguni cheese) bread covered with fried eggs on top. And for dessert there’s churchkhela candy, pelamushi or qada sweet pastry! 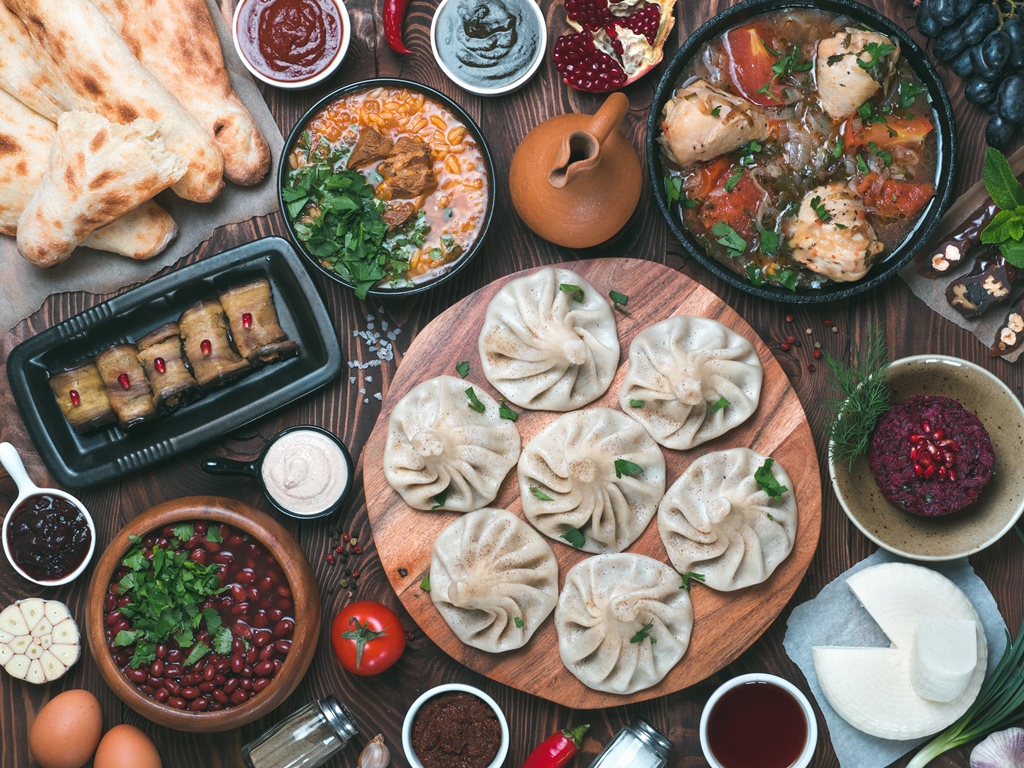 One of the best preserved cultures

One question that always bothers everyone is “does Georgia belong to Europe or Asia”? If we look at its geographical position, it would be more appropriate to call it an Asian country, however their appearance and culture is more related to Europe. Furthermore, Georgian language is unique because it does not belong to any other language family and it has its own writing system, the Georgian scrypt. Despite all the influences coming from surrounding countries, Georgia managed to preserve its culture. Perfect examples of that are Georgian polyphonic singing and folk dances (over 15 of them!) and there are more than dozen ethnic subgroups of Georgia with their own unique customs. Pretty amazing fact if you asks us. 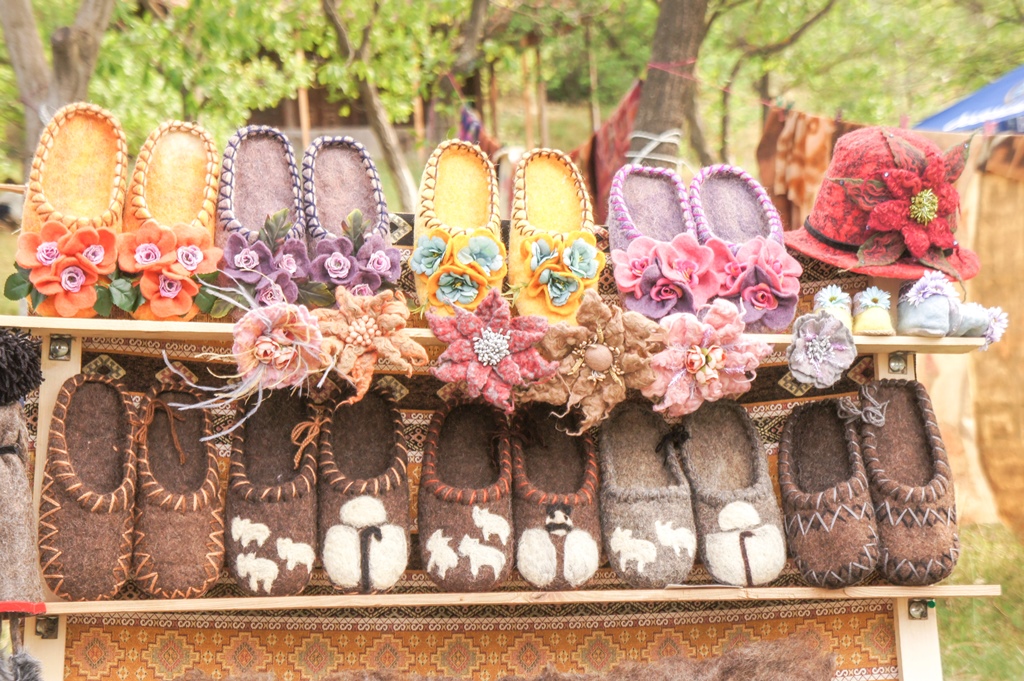 Want to visit a cave? Georgia has an entire city of them!

If there’s one thing Georgia does not lack, then that thing would be caves. There’s even a cave-city which is told to be one of the oldest settlements in Georgia. We’re talking about Uplistsikhe – an ancient town built inside the rocks around 1000-1200 BC which was once home to more than 20 000 people. But Uplistsikhe is not just some random ruins, it is full of long halls, corridor streets and you’ll even find the remains of the ancient theater. On the other side of the country, in western part of Abkhazia (partially recognised state which is still officially part of Georgia but they identify themselves as an independent nation) is located the deepest cave on Earth. Krubera cave is deep almost 2200 meters deep and 13.5 kilometers wide. This cave is also partially under water, that’s why the researchers fully explored the cave only in 2012. There’s even a legend which says that Prometheus was sent to a cave in the Caucasus Mountains as a punishment because he stole fire from the Gods and gave it to humans. This particular cave is nowadays called Prometheus (or Kumistavi) Cave and it is located near the Georgian town of Tskhaltubo. 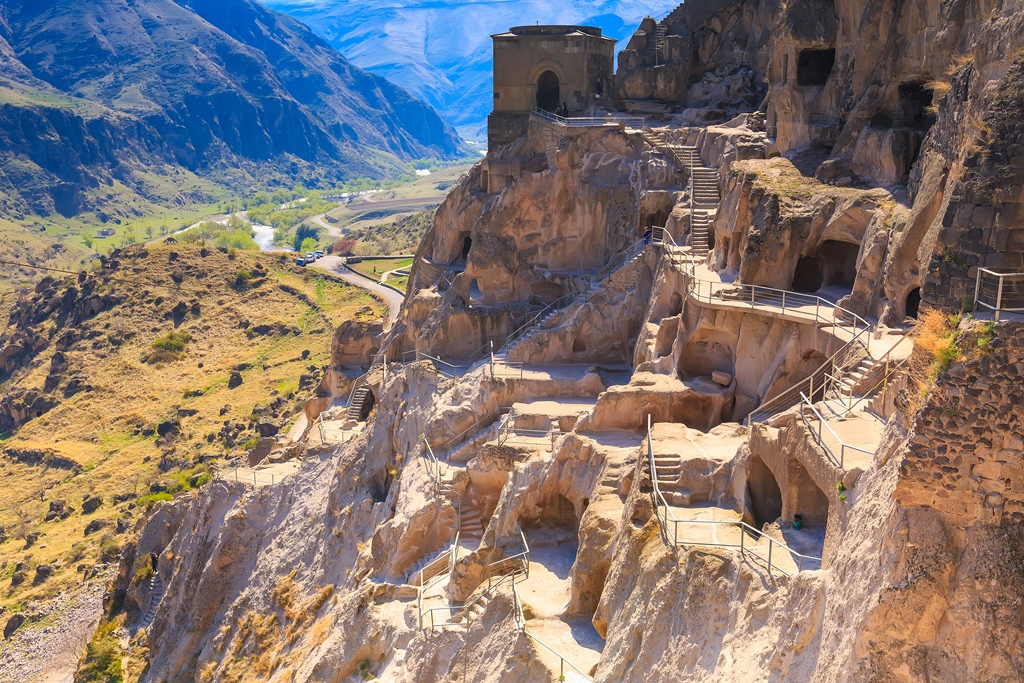 Visit the amazing church on the hill

One of the best views that you can get in Georgia is definitely the Gergeti Trinity Church. This isolated church on top of the steep hill is one of the favourite “hidden gems” among the travellers. The church is situated on the right bank of the river Chkheri and it gives a perfect view on Gergeti village and Mount Kazbek, the third highest mountain in the country. It takes a bit of time to get there but once you get there, all the effort will pay off. First you need to take a bus from Tbilisi to Stepantsminda and you can continue by foot from there (cca 2.5 hours) or you can get a taxi. 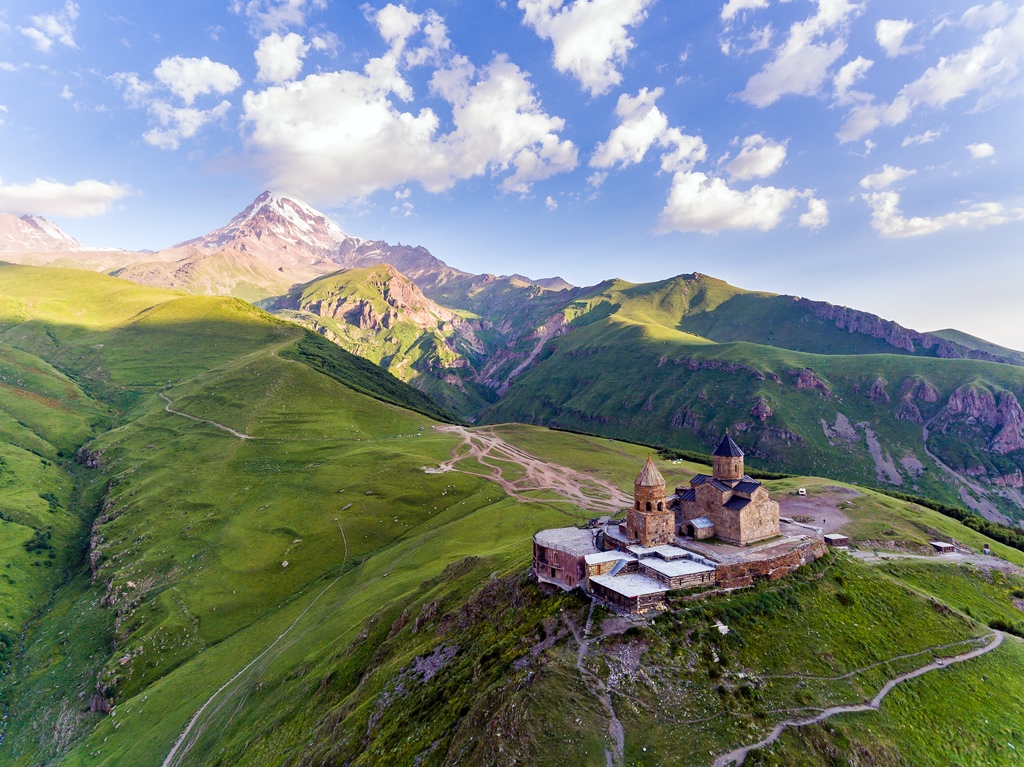 Need a remedy? Use Chacha!

Chacha is actually a type of clear,strong brandy and it is made of grape pomace (residue left after making wine). In the past, this drink used to be only homebrewed but nowadays it is produced by the majority of Georgian wineries since it became a national signature drink. Besides grapes, one might come across with chacha versions including figs, tangerines or mullberries. For comparison, chacha would be very similar to Balkan rakija. Georgians claim that chacha has medicinal effect and that it cure many illnesses such as indigestion or stomachache (like many Balkan people claim for rakija as well). So, if you’re in pain, cure it with chacha! 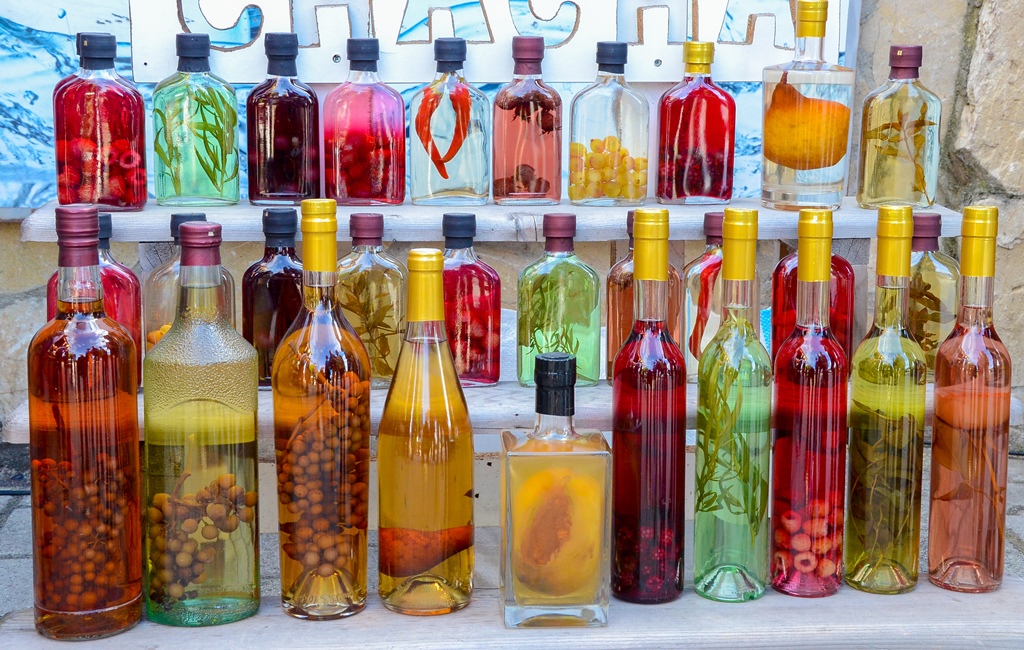 Visit the highest village in Europe

The title for the remotest village in Georgia and also the highest village in Europe goes to Ushguli, small settlement in the foot of Shkara summit. Positioned at an altitude of 2100 meters, Ushguli counts merely 250 of permanent inhabitants. This village is so remote that snow covers the entire place for full 6 months and sometimes snowing gets so heavy that the roads are closed and no one can access Ushguli. So, if you want to get some peace and quiet, and run away from stressful life – come to Ushguli, but during the summer of course! :), 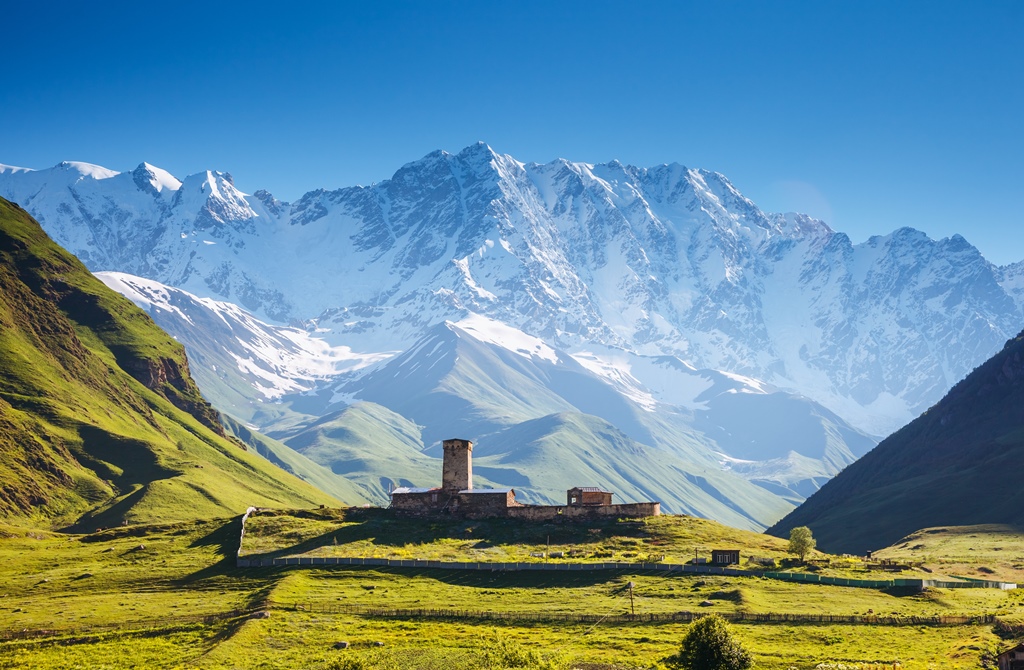