Even the birds in the trees know that Bavaria is not just the largest federal state in Germany, but also the most popular one. It is cherished by passionate football fans, history and architectural lovers as well as people who simply enjoy the beauty of nature. An abundance of customs, cultural heritage, traditional cuisine and of course worldwide famous Bavarian beer craft enhance the fact that this area of Germany should be added to any travel list. If you want to be a part of the Bavarian fairy tale, we bring you a list of places to visit. Wir wünschen Ihnen eine gute Reise!

NOTE: If you’re traveling in a group, a great way to save money is by purchasing the Bayern ticket. It offers you unlimited travel for a day on regional buses and trains. The cost is 25€ for the first passenger, and for additional ones 7€ per person (up to 5 adults). It is advisable to purchase a regional day ticket for extra savings on this trip.

Always wanted to be a part of Disney’s famous fairy tale Beauty and the beast? Say no more. This beautiful Schwangau castle on the hill surrounded by enchanting nature was a model to the original castle in the movie. Ludwig II of Bavaria was a passionate fan of the famous German composer Richard Wagner; hence this castle was built in his honor. This symbol of Romanticism is highly visited today and because of its own safety, you can only enjoy it in a 35-minutes tour and mustn’t take photos. To reach the castle from Schwangau you choose between three options: shuttle bus (cca. 3€), horse carriage (cca. 11€) and the simplest way – a 30-40-minute walk in fresh air throughout divine nature. You will visit the largest room Hall of the Singers, Throne Hall, Study Room, Dining Room, and even Ludwig’s Bedroom. After the tour, go to the bridge beyond the castle from where you can take outstanding pictures. If you want to feel a bit of Disney magic, we definitely recommend you to add a day trip to Neuschwanstein Castle. 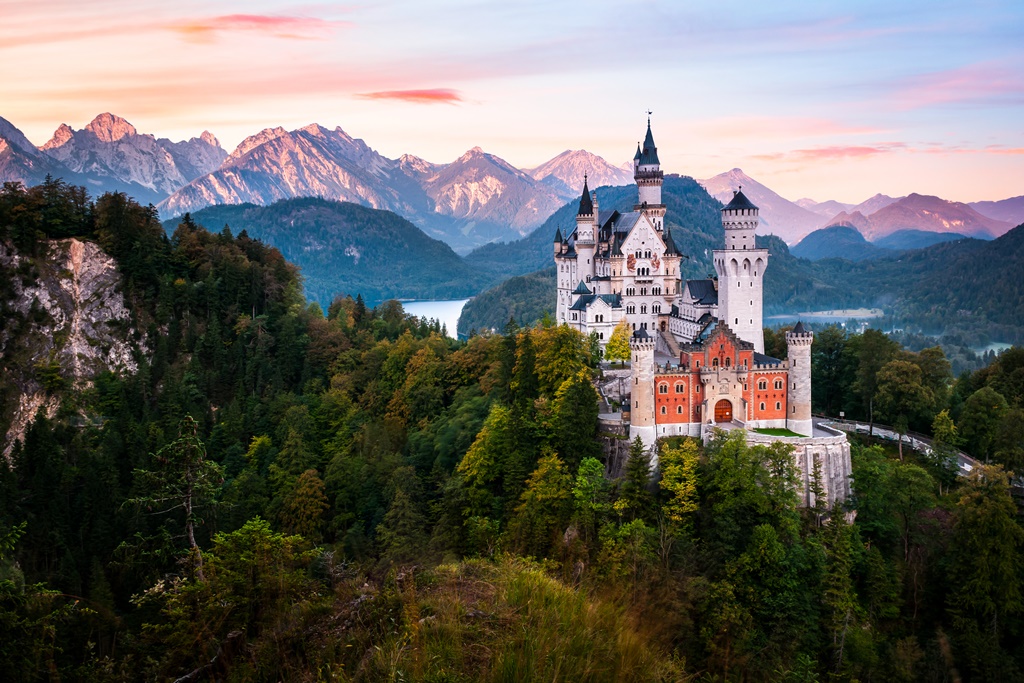 Getting to Neuschwanstein Castle:

Füssen will be your starting point on this journey. From there, you catch a bus to Schwangau (bus 73 or 78).

Plane: Füssen doesn’t have an airport, and the closest one is located 79km away, the Memmingen Airport. Innsbruck Airport (103km) and Munich Airport (158km) are also at your disposal.From the airport you choose, take the bus or train to get to the city of Füssen.

Bus: The bus station in the city is situated beside the railway station. Maybe you won’t have the direct bus line to Füssen from your city but after your transfer, you will surely arrive here.

Train: Füssen is well-connected with other cities in Germany thanks to Deutsche Bahn. Around 20 trains are operating daily from the city’s railway station.

History fanatics will be amazed by the fact that outside Dachau stands the first Nazi concentration camp. The Dachau concentration camp was a model for the following camps built in Germany. At first, the purpose of the camp was to detain political prisoners, but over the years Nazi were deporting Jews, Jehovah’s Witnesses, people with disabilities, homosexuals, gypsies, and priests to Dachau. Over 30 000 deaths were documented there. At the entrance of the camp you can see the infamous phrase ”Arbeit macht frei” (Work sets you free). The Dachau camp was presented to the public as a re-education camp with an emphasis on labor, however it quickly became a notorious concentration camp. Jourhouse, barracks, Camp Road, Crematorium, Religious and the International Memorials are just some of the places that you will see during your tour. 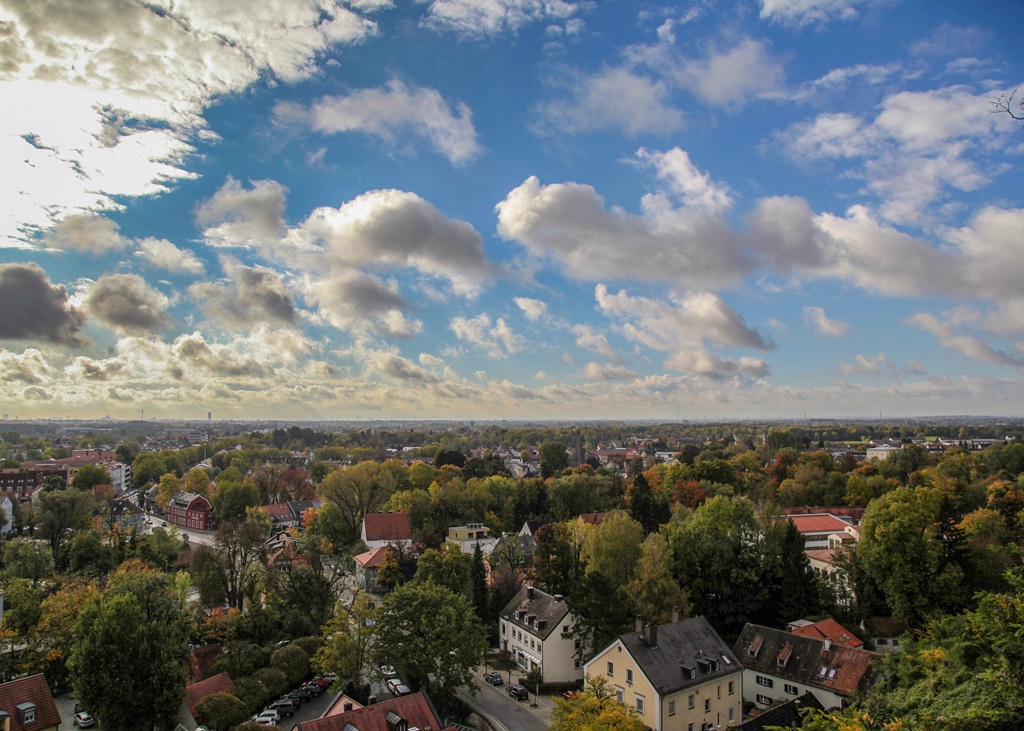 From Schwangau to Dachau concentration camp

The best way to reach Dachau from Schwangau is by going back to Füssen. From there you can take either bus or train to get to Dachau station. Afterwards, take the bus 724 or 726 to get to the camp.

Bavarian capital, the third-largest city in Germany, is situated on the banks of the Isar river in Bavaria. Medieval and contemporary architecture blends perfectly within this city and contribute to its originality. Marienplatz, New and Old Town Square, St. Peter’s church, a must-see tourist attraction Rathaus-Glockenspiel, as well as three remaining gothic gates Isartor, Sendlinger Tor and Karlstor, are just some of the main sights. Munich is the centre of German economy and finance,  and a home to major companies like Allianz, BMW, and Siemens. Other than that, the city is a host to many cultural and sports events. The “football temple” Allianz Arena, BMW Museum, one of the largest city parks in Europe English Garden, gallery Alte Pinakothek and many more interesting sights are all worth visiting while in Munich. In this part of Germany, beer craft is highly appreciated, thus it is no wonder that Oktoberfest is one of the world’s most visited festivals. Munich is a city where old meets the new, therefore it is a must-stop on this trip. 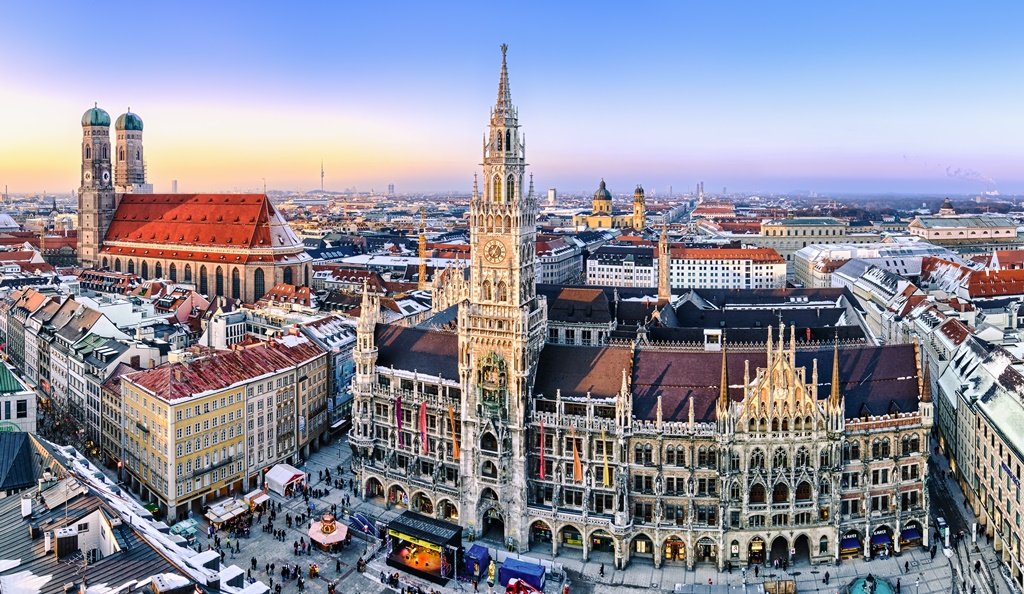 From Dachau concentration camp to Munich

Firstly, take the bus 724 or 726 to get back to Dachau station. To continue your trip to Munich, there are two options on your disposal, going by bus or train. It takes around 20 minutes with the regional train and 40 minutes if you take the S2 line.
Note: S-Bahn is an electric rail transit system in Munich, Germany

Named after Roman Emperor Augustus, this third oldest city in Germany was founded in the 15th century BC. In the past it was also Free Imperial City, and nowadays it is an urban university town known as Aux. A great spot to take photos at is the oldest social housing estate in the world, Fuggerei. Some of the main sights are Town Hall, Perlachturm, St. Anne’s Church, baroque palace Schaezlerpalais, St. Ulrich and St. Afra churches (Peace of Augsburg), a puppet theatre Augsburger Puppenkiste, The Augsburg Botanical Gardens, childhood home of Bertolt Brecht and many more. Part of the eastern Augsburg city wall is the statue of the famous baker holding a shield and a loaf of bread, the Stony Man. It is believed that touching the stone figure’s iron nose brings good fortune. Richness of urban legends and beautiful sights all over the city make this place a perfect stop on the Bavarian round trip journey. 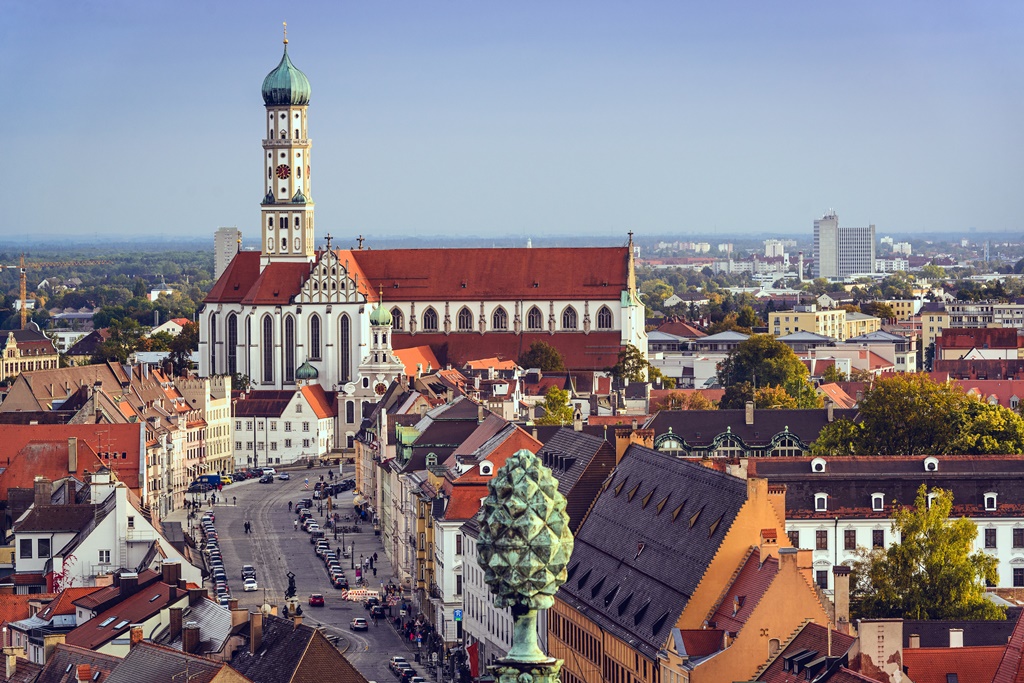 Leberknödelsuppe is very popular dish in Augsburg, as well with some traditional Bavarian delicacies such as Spaetzle, Schnitzel and many more. Try these fit for a king meals at Perlach Acht, Berghof, Ratskeller, Nikos Tavernaki, Drei Koniginnen and more.

From Munich to Augsburg

You can choose between several options, most notably taking a bus to Augsburg or a regional train.

The second largest city in Bavaria is surely an ideal family destination. Broadly famous for its International Toy Fair, gingerbread cookies and authentic pocket watches (Nuremberg eggs). Heart of the medieval center is Nuremberg Castle, three unified buildings which were important defense factor within the city walls. The Hauptmarkt forward-facing Our Lady’s Church on the main square of the old town, annually becomes Christmas market. Pay a visit to The Germanisches Nationalmuseum, a paradise for lovers of cultural history and art exhibitions. Also, House of Albrecht Dürer, Nuremberg Toy Museum, Nuremberg zoo, Fleisch Bridge, St. Laurence church, St. Lorenz’s church and the oldest chain bridge Kettensteg, are sights worth seeing. Historians will want to see the Nazi party rally grounds as well as the documentation-center. Don’t forget to spin Nuremberg Ring on the Schöner Brunnen, a beautiful fountain located next to the main market of the city. It is said that spinning it brings good fortune. Well, definitely add Nuremberg on your travel list and spin the ring! 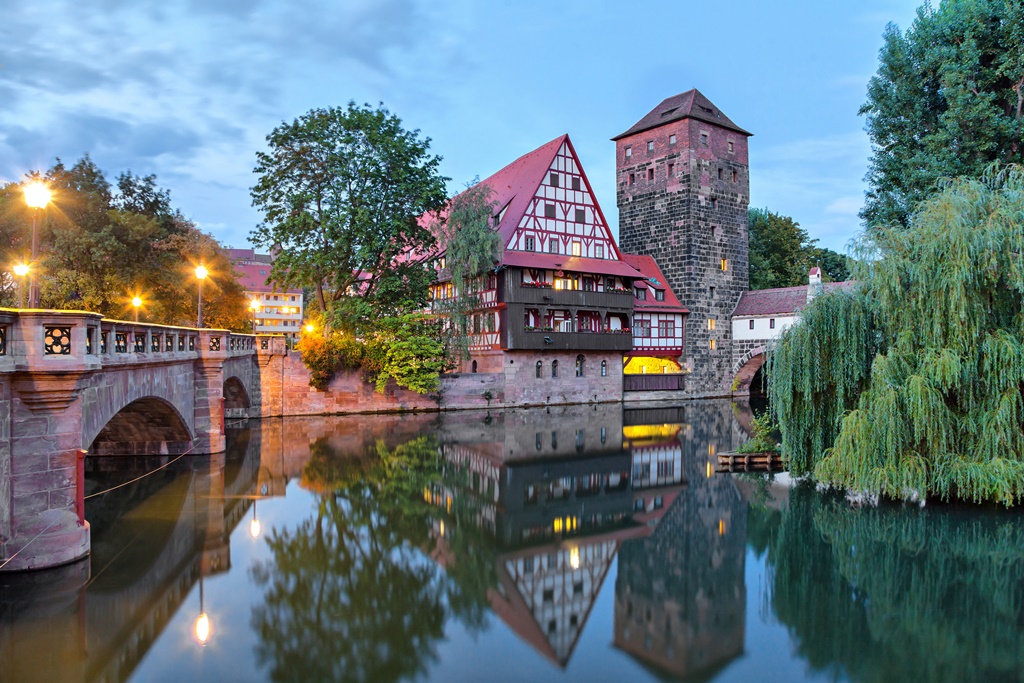 From Augsburg to Nuremberg

The fastest option to reach Nuremberg from Augsburg is by train, but you can also take a bus, which could be cheaper option.

Located on the banks of the river Main, this charming city is the starting point of the Bavarian Romantic Road. This historical town is loaded with magnificent examples of baroque and renaissance architecture, such as the Marienberg Fortress, the Käppele church, the Juliusspital hospital, Würzburger Residenz (a UNESCO World Heritage Site) and many more. Wurzburg has around 100 churches (and is often referred to as “the city of churches”) as well as lots of museums and galleries. Outside of the town, The Würzburger Stein is the oldest and largest vineyard in Germany. Wurzburg also annually hosts the Mozart Festival – a four-week festival celebrating classical music, and the oldest festival dedicated to Mozart’s music in Germany. Make Wurzburg part of your trip to Bavaria and enjoy some classical music while drinking authentic Steinwein. 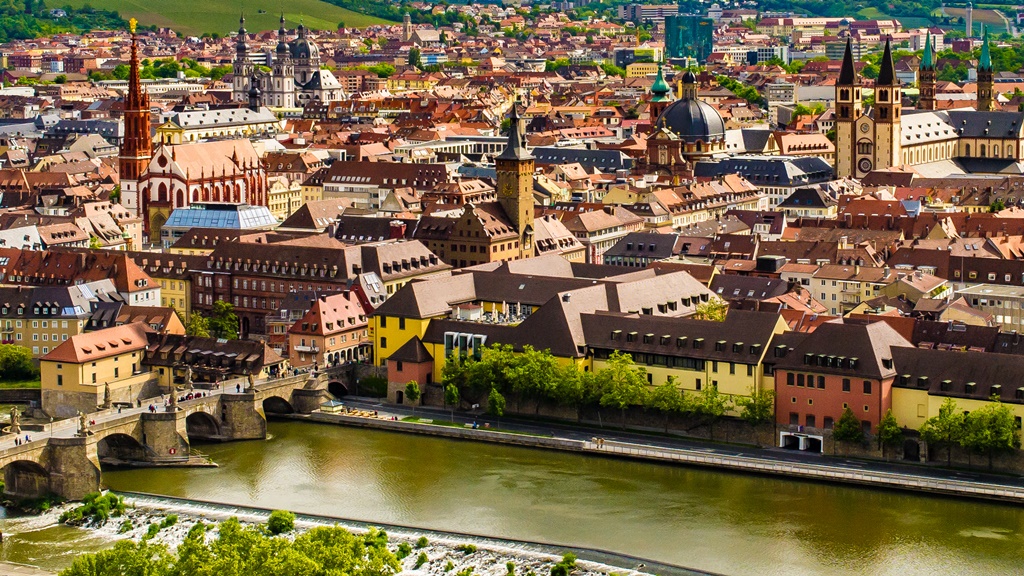 From Nuremberg to Wurzburg

Bus departures from Nuremberg to Wurzburg can be found here. If you want to travel by train, check the D-Bahn schedule.

Bamberg, also called the Franconian Rome, sits on 7 Bavarian hills. A great part of this town is a UNESCO World Heritage Site and has been since 1993. The main attractions are the Bamberg Cathedral, Bamberg Altstadt, Old town hall, Altenburg Castle, Neue Residenz and more. A dash of Italian spirit can be found in this city, along the bank of the river Regnitz in the former fishermen’s district. It’s called Little Venice. Being the home of smoked beer Rauchbier and nine breweries, Bamberg justifies the fact that the best of the Bavarian beer craft can be found here. The city even has its own special variety of potato, the Bamberg potato. Festivals are also popular here, especially during Christmas time and in August (Sandkerwa festival celebrated with beer). Traditional delicacies served with the best beer in this fairytale-like city, sound like the perfect conclusion to your Bavarian adventure. 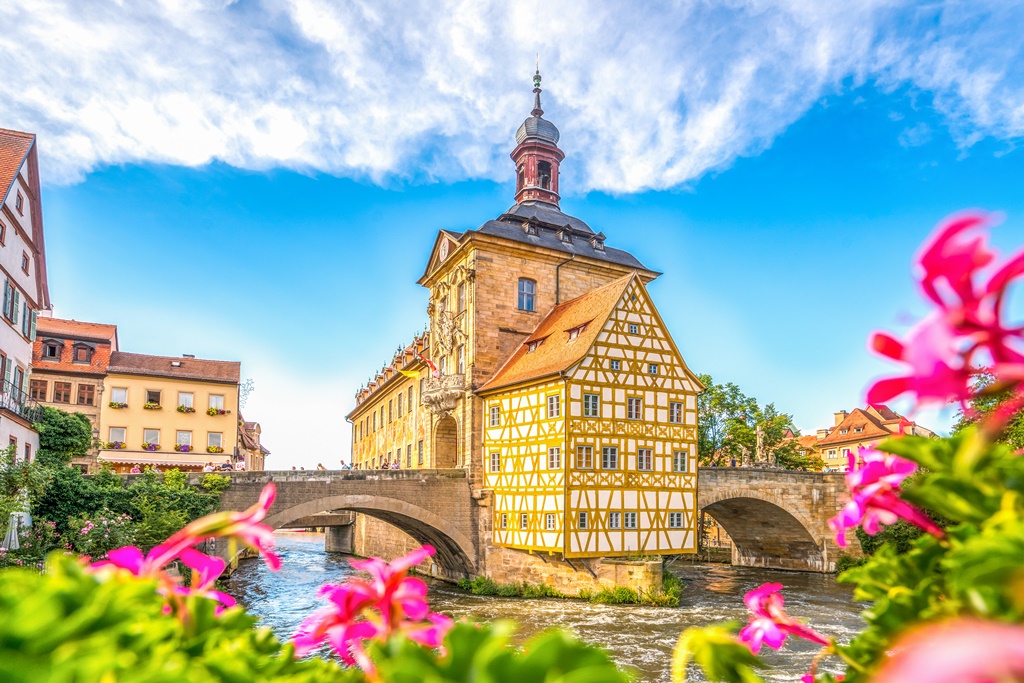 From Wurzburg to Bamberg

Once again, D-Bahn is the best option to choose from.

If you want to plan a perfect getaway and have extra time on your trip, we recommend you visit the Berchtesgaden municipality in Germany. It’s nestled underneath Watzmann Mountain and close to the glacial Lake Königssee, at the heart of the Berchtesgaden National Park.  The main tourist attraction in the park is Church of Saint Bartholomew. One more significant place that sticks out is Kehlstein Mountain and it’s Kehlsteinhaus (Eagle’s Nest). This mountaintop retreat was a symbol of dominance of the Nazi regime, and the meeting place of their members. Today it serves as a tourist attraction with a beer garden and restaurant. German history combined with beautiful landscapes sounds like an idyllic escape from city life for a while. 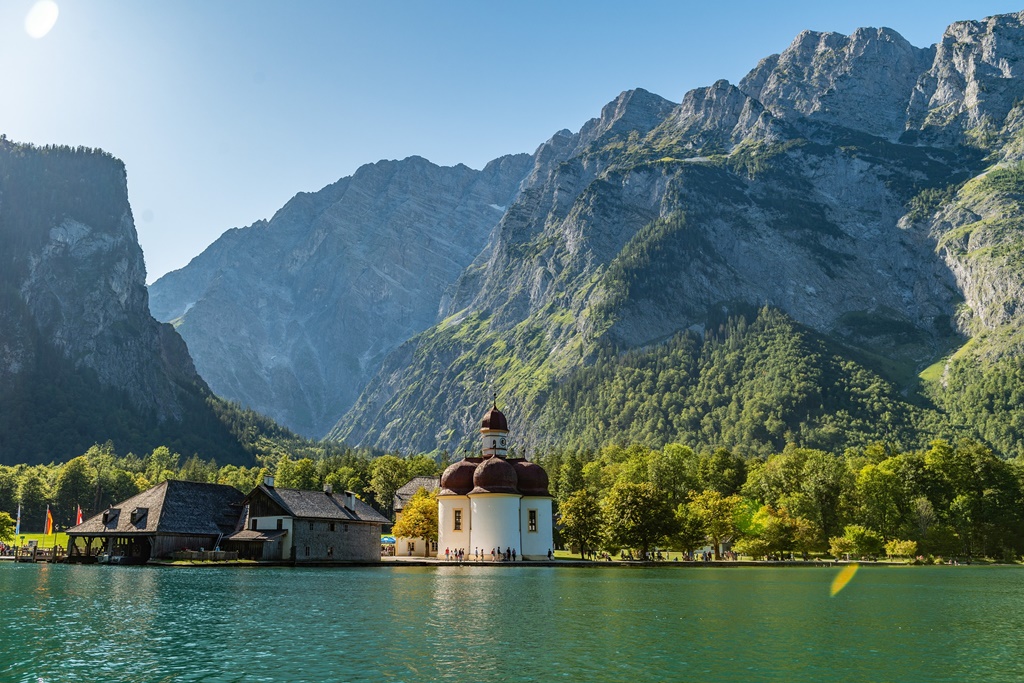 If you agree that food is better with a view, you will enjoy eating at Gasthaus Cafe Graflhoehe Windbeutelbaron and Panoramarestaurant. But, if you prefer traditional interiors visit Berggasthof Oberkalberstein

From Bamberg to Berchtesgaden

The best option to reach Berchtesgaden in this case is by taking the train.