What to see in Northern Ireland

Northern Ireland is officially still part of the United Kingdom but a long history of Troubles has made it stand out as a separate destination for ever growing number of tourists visiting this amazing Irish region. Wherever you go you will be surprised by the amount of good vibrations coming from the understanding of recent history, hospitality, live music, pints of beer and local whiskey, good local food, green fields, rocky cliffs with some amazing views of the Atlantic ocean, vibrant city life…

If you are planning to visit Northern Ireland, check out this list of top 5 places you absolutely have to see.

The capital and largest city of Northern Ireland, Belfast is still the centre for industry, higher education, arts and business in the region. Probably the most famous ship in the world, the Titanic, was built in north Belfast shipyard Harland&Wolff, and there you can also visit the Titanic Belfast Museum. Severely affected by the conflict during the Troubles, the city has undergone the changes, modernisation and expansion in recent years. You will notice the traditional architecture (two-storey brick row houses), especially in the western part of town, where you can also see the famous murals dedicated to Irish freedom fighters. Around the center, on the other hand, you will see the skyscrapers and glass structures, shopping malls and Starbucks coffee shops. Belfast is the city of contrasts and you will love it!

Second-largest city in Northern Ireland, Derry is an old walled city now extending on both sides of the river Foyle. The intact city walls and the cathedral of St. Columb are located on the west bank. The 17th century walls are transformed into a promenade from which you can admire the inner city and its Renaissance-style street plan. If you google “Derry city walls” you will probably find the reference to Dubrovnik old town and city walls (in Croatia) because Derry is nicknamed “Dubrovnik of the north”. Derry is a small city and you can see it all in one day. The most important places for Derry’s modern history are the Free Derry Corner at Bogside area (known for the murals dedicated to the Troubles and the Civil Rights Movement), and the Museum of Free Derry (dedicated to Bloody Sunday). Derry is also a great place to experience the real Irish pub atmosphere with live music and local beer and whiskey. 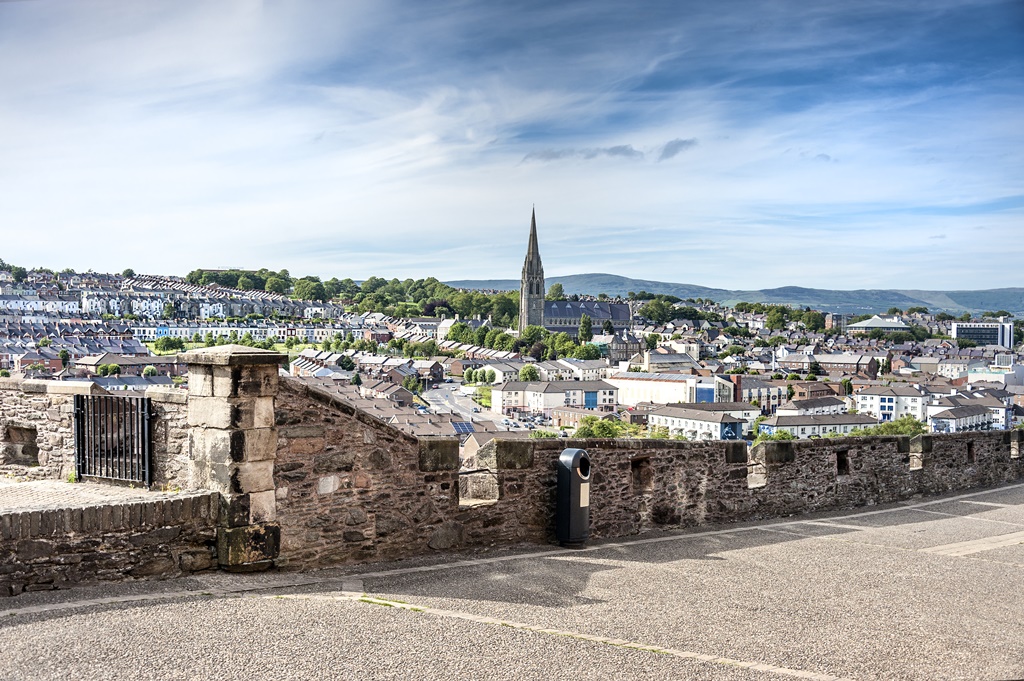 Bushmills is a small village on the north coast of Antrim, less than 100 km from Belfast. It was named after the river Bush and an old watermill that was built in the early 17th century. The most famous and popular tourist attraction in Bushmills is the Old Bushmills Distillery founded in 1784 that still produces the same three types of whiskey: Bushmills Original, Black Bush and Bushmills Single Malt (here you can find different versions – from 10 to 21 years of maturation). Although the distillery was built in 1784, the whiskey bottles have the year 1608 imprinted on the brand label, thus commemorating the year when the owners were granted the licence to distill whiskey in the area. 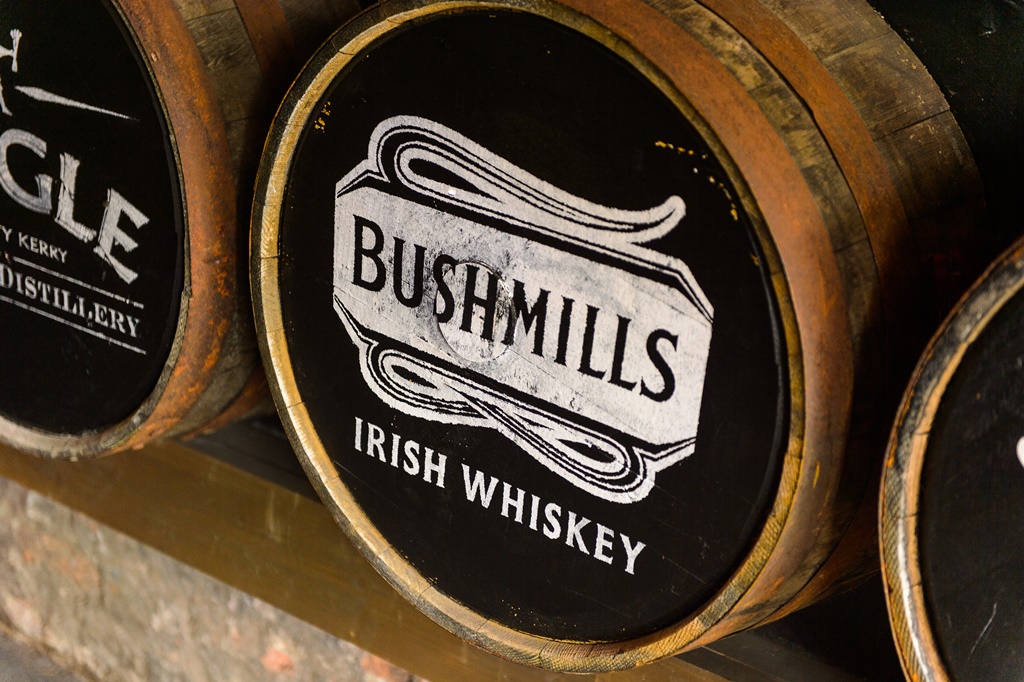 Carrick-a-Rede island is a popular tourist sight. It is connected to the mainland by a rope bridge over the Atlantic ocean and offers fantastic views from the cliffs: green ocean, Causeway Coast and even the Scottish coast. The rope bridge that is suspended almost 30 m above sea level was first erected in 1755 by salmon fishermen. Today, it is a one-of-a-kind rope bridge that not everyone dares to cross… You can reach Carrick-a-Rede by bus, Ulsterbus lines 252 and 256 from Belfast. 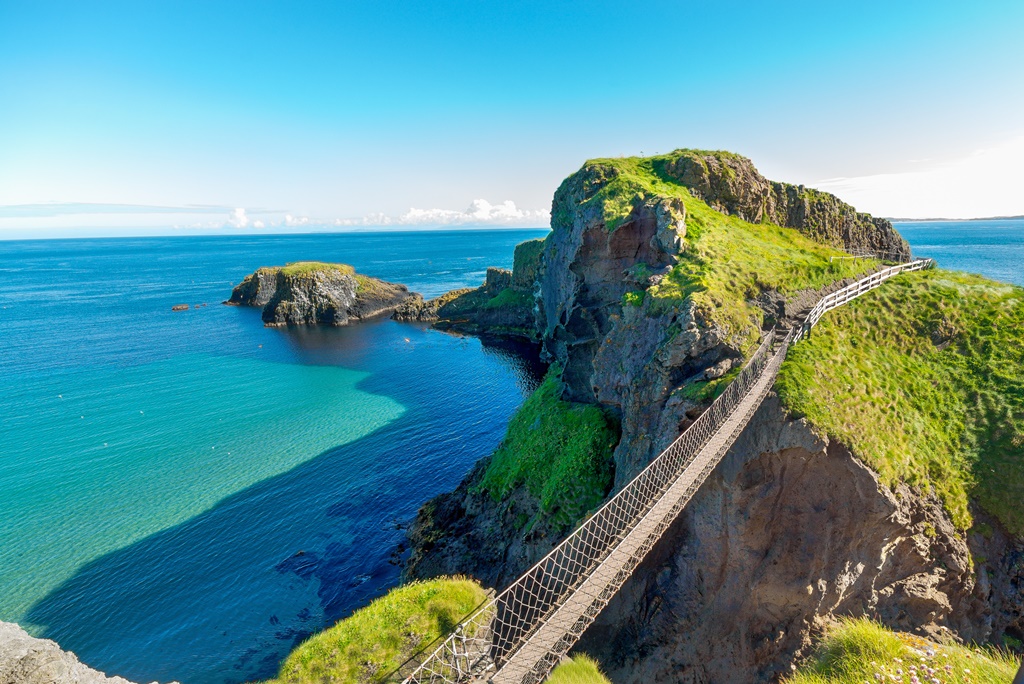 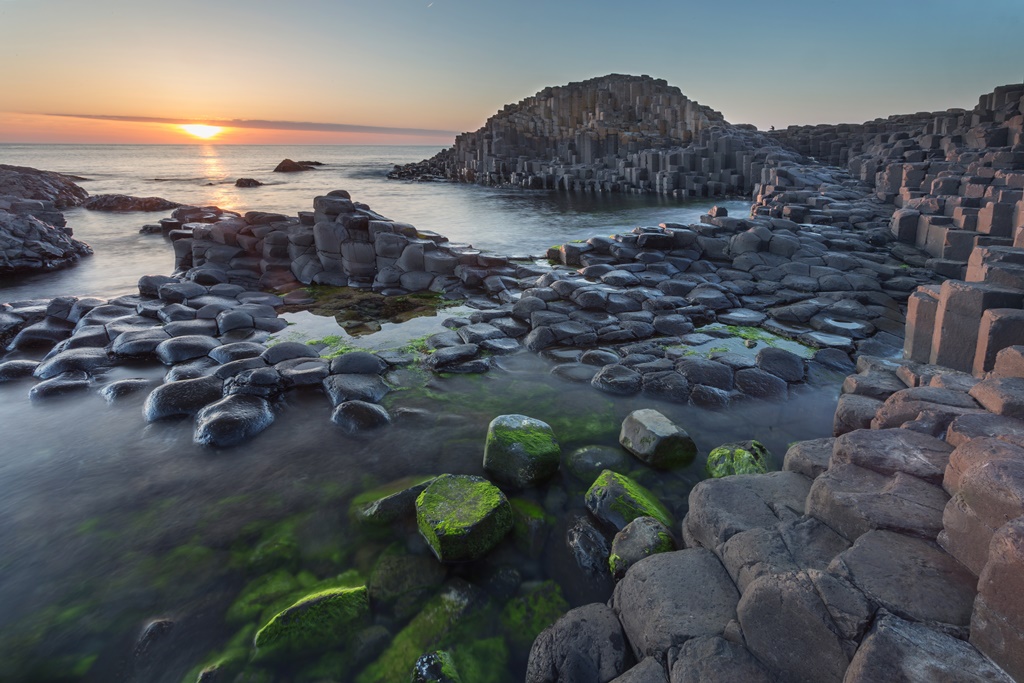