It is the largest international airport in the area, serving 15 million inhabitants of northern Italy. In 2017 Malpensa counted more than 22 million passengers.

Besides Malpensa, the city of Milan is also served by Milan Linate Airport. Although it is a lot smaller than Malpensa, it is ranked as the fifth busiest airport in Italy.

How to get from Malpensa airport to Milan

Travelling to and from the airport is easy and there are a few options to choose from.

Malpensa Express service has two different lines connecting the airport with the city center.
The first one reaches Milan Cadorna station (transit time 29 minutes).
The second one runs to Garibaldi (41 minutes) and Central station (52 minutes).
Trains depart from the airport train station next to the Terminal 1, every 30 minutes.
For both lines the cost of the ticket is 13 euros for one way and 20 euros for round-trip (valid for 30 days if bought online, otherwise just for the same day).
Children under 14 years of age have 50% discount. Tickets can be purchased online, at the machines or at the counter.

Another way to travel to Milan is with a private, door-to-door transfer from Malpensa Airport to your accommodation in the city.

You can also pre-book a transfer to almost any city in Italy from Airport Malpensa that you would like to visit for a hassle-free experience.

You will find a list of the most popular transfer routes from Malpensa Airport below where you can pre-book your private transfer and pay on arrival.

The taxi fare from Malpensa Airport to any destination within Milan city center is fixed and it costs 95 euros.

Renting a car at Malpensa Airport

All car rental agencies are located in the Arrivals hall at Terminal 1.

Renting a bus at Malpensa Airport

If you are a large group arriving to the airport, you might consider renting a bus prior to your arrival.

Buses are offered by several bus rental companies in  the area.

Travelling from Milan to ski resorts

Unfortunately there are no direct connections between Malpensa airport and ski resorts, so if you are going on a skiing holiday you have to go to Milan Central station first to reach popular resorts like Chamonix, Grenoble, Zermatt, etc.

Milan to Chamonix:  Milan is approximately 240 km away from Chamonix Mont-Blanc in France. There are three options to travel from Milan to Chamonix: car, bus or train. The easiest and fastest way would be to rent a car at Malpensa airport and drive to Chamonix. Car rental agencies are located in the Arrivals hall at Terminal 1.

For those who would travel by bus, there are two companies that provide connections between Milan Lampugnano station and Chamonix.

However, to reach Lampugnano station, a combination of train and 2 metro lines is needed, which can be a hassle if you travel with luggage and ski equipment.

The train, on the other hand, requires two changes in Switzerland (in Brig and Martigny) and the overall journey from Milan Central station takes at least 5 hours (plus the waiting time in between trains).

Milan to Grenoble: To reach this ski resort, the best way is to go from Malpensa airport to Milan Porta Garibaldi station and there take the train to Chambery (France) where you will change trains to Grenoble.

The ride to Chambery with TGV train lasts approx. 4 hours, and from there you will reach Grenoble in an hour.
This service is regular and trains leave on daily basis.

Milan to Zermatt: Take the express train from Malpensa to reach Milan Central station where you can take the train to Brig (Switzerland).

When you arrive there, take the small red mountain train to Zermatt.

When arriving to Milan, the train will stop at Gallarte station (close to Malpensa). 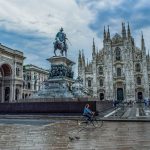