Budapest Airport (BUD), also known as Ferenc Liszt International Airport, is located 16 km southeast of Budapest city center. It is the largest and most important international airport in Hungary and counts more than 14 million passengers annually.

How to get from Budapest Airport to Budapest

There are 2 lines connecting the airport and the center of Budapest: 100E and 200E. There are also night buses which you can combine in order to get to the city center.

200E – connects the airport with Kobanya-Kispest railway station, where you can take the Metro line 3 to reach the city center. The bus leaves every 10 minutes, from 04:00 to 23:00 (4 AM to 11 PM), from Terminal 2 and the entire journey (including the metro) to downtown station Deak Ferenc Square lasts about 50 minutes.

NOTE: Tickets for public transport can be purchased at the airport from BKK service points, at the post office, the newspaper stands and from the ticket machines at the price of 350 HUF (1.20 euro). You can also buy the ticket from the driver, directly in the bus, but then the price will be 450 HUF (1.50 euro). Make sure you have hungarian forints (HUF) on you, since euros and other currencies are not accepted. 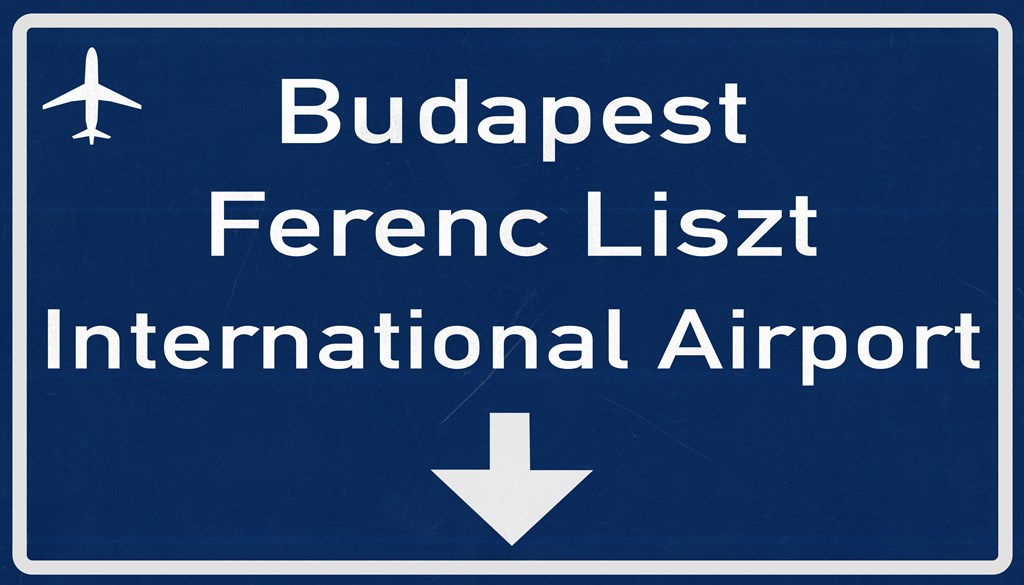 Budapest airport has its own shuttle service, a minibus that will take you directly to Népliget Coach Station. You can pre-order the minibus service, and use the reservation number as a confirmation of your transfer, or you can pay for the service in cash, to the staff at miniBud counters, where you will book your transfer.

Another way to travel to Budapest is with a private, door-to-door transfer from Budapest Airport to your accommodation in the city.

You can also pre-book a transfer to almost any city in Hungary from Airport Budapest that you would like to visit for a hassle-free experience.

You will find a list of the most popular transfer routes from Budapest Airport below where you can pre-book your private transfer and pay on arrival.

Fotaxi is the official taxi service of Budapest airport. Their booths are located at the exits from terminals 2A and 2B. All cars have POS device which means that they accept credit cards. From 2013, prices are regulated and a fix rate was introduced, so you can expect to pay around 7200 HUF (22 euro) for a ride to the city center, depending on the traffic. Please note that there are other, non-regulated drivers around the terminal building, so to avoid being scammed use the regulated service.

Renting a car at Budapest Airport

there are six car rental companies at Budapest airport, including Sixt, Avis, Europcar, etc. You can find them at terminals 2A and 2B. You can compare their prices on the following link, save time and book online.

Renting a bus at Budapest Airport

if you are a large group arriving to the airport, you might consider renting a bus prior to your arrival, you can rent a bus to go to your hotel in Budapest or to any other town. Book your bus in do time, so that you can arrange pick up locations at the airport, usually the bus company can advise you on that part.

No, if you arrive after 11 PM, there are night buses from the airport leaving every 30 to 60 minutes, so the only thing you can worry about is having to wait a bit for the next bus. And don’t forget to change the bus at Bajcsy- Zsilinszky Ut! If this sounds too complicated, you can always take the taxi or a transfer. They are available 24/7.

Yes, there are several hotels near the airport, some of them at just 1.5 km distance. Airport Hotel Budapest even offers free shuttle service to the airport.

I would like to visit Budapest in between flights. Is this possible?

Yes, there are a few bus lines and a shuttle service, whatever you choose you will be in the center in less than an hour. The same time/routes are required when coming back to the airport, so mind the time and enjoy your day in Budapest!

Yes, you can exchange money at Interchange counters, and there are several ATMs in the arrivals area and in transit areas of terminals 2A and 2B, available 24/7.

Can I travel by bus to Vienna, Zagreb, Bratislava or Prague from the airport?