Ston is a small Croatian settlement near Dubrovnik city. The name refers to Veliki Ston (Great) while there is also Mali Ston (Little) right next to it. Both are located on the Peljesac peninsula. Ston is largely known for the famous Ston Wall, salt works and oysters. Visiting Ston is a perfect idea if looking for a charming town with a rich cultural background, but also an escape from the city hustle.

How to get to Ston

Ston is located at the isthmus of Peljesac peninsula, close to the connection to the mainland, around 55 km from Dubrovnik. Therefore, getting there can be done by car or bus. Here is how to get to Ston by each means of transport.

If arriving from the direction of Dubrovnik, Ston is located only about 55 km which is approximately an hour ride.

If arriving from the direction of Split, there are more options on how to reach Ston.

Remember, Ston is located after the Neum corridor, the part of Bosnia and Herzegovina territory that separates South Dalmatia from the rest of the country. When getting to Ston this way, you need valid documents for border control. However, this is the fastest and most convenient option since the travel time is up to 2.5 hours.

There are also two more options to reach Ston from the direction of Split that don’t include border crossing:

The first one is getting to Ploce by car and then continuing by ferry from Ploce to Trpanj on Peljesac. From there you can continue by car to Ston. The approximate travel time is up to 5 hours.

The other option is to take a ferry from Split to Vela Luka (Korcula island), reach the other port Domince where you can catch a ferry to Orebic on Peljesac. From there you can continue by car to Ston. The total travel time is about 4-5 hours, not including the waiting for the ferry in between.

In case you don’t arrive in your own vehicle, you can always consider renting a car. You can do it at the airport, in the city or simply book your car online.

NOTE: Peljesac Bridge is currently under construction and it should connect the South Dalmatia with the rest of the country in order to avoid the current border control in Neum corridor. The end of construction is planned for 2022. 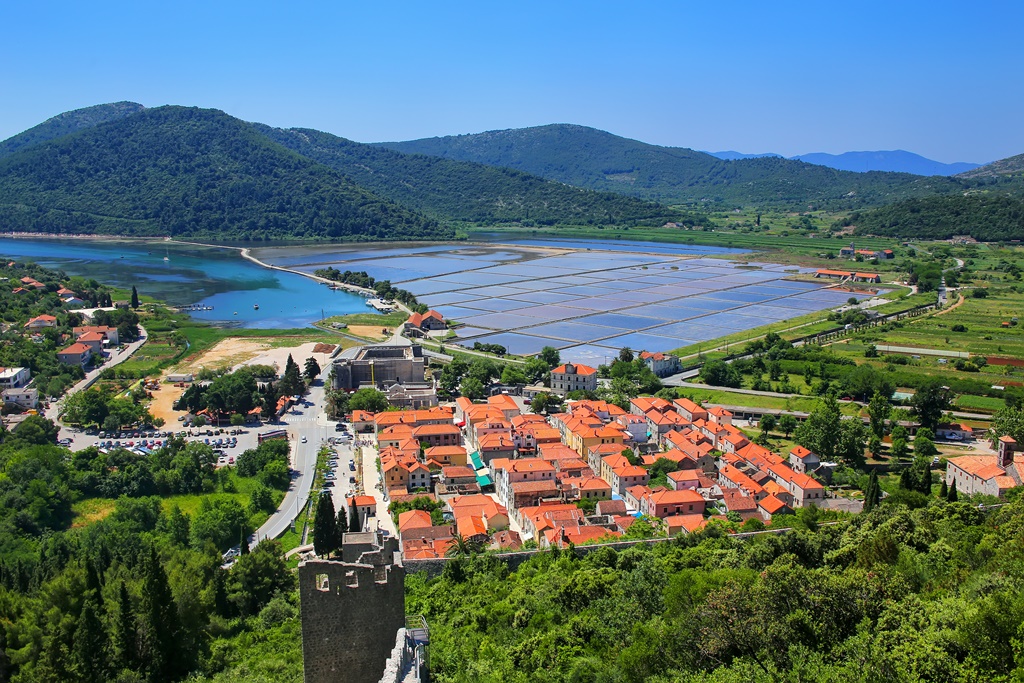 In order to get to Ston, you can also take a bus. Buses to Ston depart from several cities in Croatia and the region, including Zagreb, Split, Zadar and Dubrovnik. You can check the details and purchase your tickets below:

What to see and do in Ston

Ston and Mali Ston offer an authentic experience with years and years of history and tradition. The two towns are connected by the worldwide famous Ston Wall dating from the 14th century. Thanks to the position, towns instantly developed a large production of salt and seafood.

The mighty Ston Wall dates back to the period of the Dubrovnik Republic. Originally more than 7 km long, the wall is among the largest ones in the world, not much after the Great Wall of China. As the production of salt and oysters was widely recognized, the wall was built in order to protect the salt pans and other goods. The fortification originally had three fortresses, seven bastions and more than 40 towers.

Today, there are three central parts of the fortification. The largest tower is Veliki Kastio in Ston, well preserved and open for visitors. Fortress of Koruna is visible from afar as it rises right above Mali Ston. Another sight in Mali Ston is also Podzvizd fortress located on top of a hill.

Runners from all over the world gather in Ston for Ston Wall Marathon held every year in September. Both recreationists and professionals are invited to do the unforgettable race of 4, 15 or 42 km on the Wall. 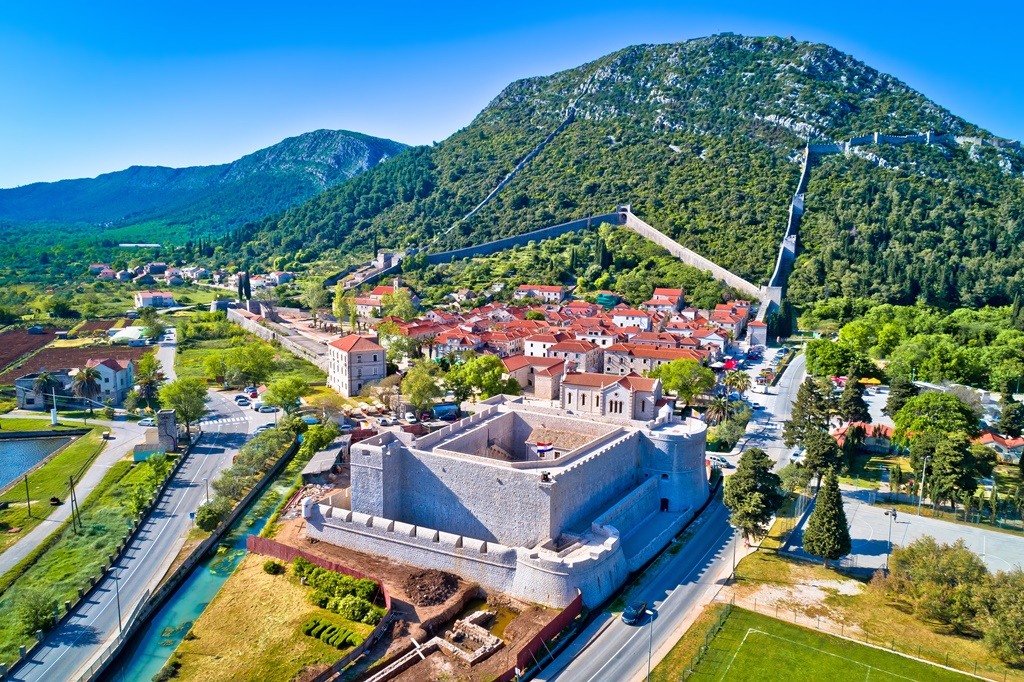 The saltworks of Ston are among the oldest and best-preserved ones on the Mediterranean. The tradition of salt production dates back all the way to the Middle Ages. Therefore, Ston played an important role in salt distribution in Europe over the last 4000 years.

Visiting Ston in July and August summer heats lets you witness the salt harvest when the salt is being traditionally collected by hand, stored and then distributed. If interested, you can also join the Gathering Salt Summer Camp when volunteers can join the harvest as well.

Besides salt, Ston is known for the cultivation of oysters, mussels and seashells for centuries now. According to data, this tradition dates back to Roman times. Mali Ston bay seems to have all the perfect natural conditions for farming the best oysters, more precisely Ostrea edulis (European Flat Oyster) and Mytilus galloprovinicialis (mussels). The whole cultivation process of an oyster that ends up in a belly within seconds lasts about 3 years. Visitors of Mali Ston can join a tour and learn the entire process, as well as the historical background of this business.

So, if you’re keen on seafood, Ston is a place where you can get the ultimate experience. The Šare family is one of 40 families that have official permissions to cultivate oysters in this bay. They also offer tours where you get to know the whole process, but the best part awaits in their restaurant, Bota Šare. Expect no less than the freshest oysters and seafood specialities in the lovely place at the waterfront of Mali Ston. Other places where you can expect the high standards include Lukas Taverna, Konoba Manadrac, Gastro mare Kobas, Konoba Bakus and Stagnum.

Those who find themselves in Ston during spring might be part of the annual Oyster Festival that celebrates not only one of the most valuable products of Ston, but also the holiday of Saint Joseph.

You will find all types of accommodation in Ston area, from hotels to private accommodation. You can search for options below and find the one that suits you best.