The cradle of civilization and the ultimate Mediterranean destination, Greece has it all! From the turquoise waters, incredible islands and unique architecture to splendid landscapes and ancient remains, no wonder Greece is one of the top destinations in the world. If visiting Greece, don’t stick to Athens and Zakynthos only, there are many marvellous places that will introduce you to the unique Greek culture. Check out our suggestions for the best small towns in Greece and start planning your trip!

Santorini is one of the top destinations in Greece, no doubt, and Oia is the most picturesque village on the island. Situated only 11 km from the “capital” Fira, Oia is known for its unique recognizable Greek architecture of white houses and blue domes, narrow streets and authentic food. Oia is also a place of one of the most breathtaking sunsets in the world which can be watched over Ammoudi Bay. Although a village, expect crowds in the summer season. However, Oia is a pedestrian town with an almost 10 kilometres long path for the most scenic walk. Luxurious bars and restaurants are scattered all around and on top of the village lies the Castle of Oia, a perfect reward for hikers. 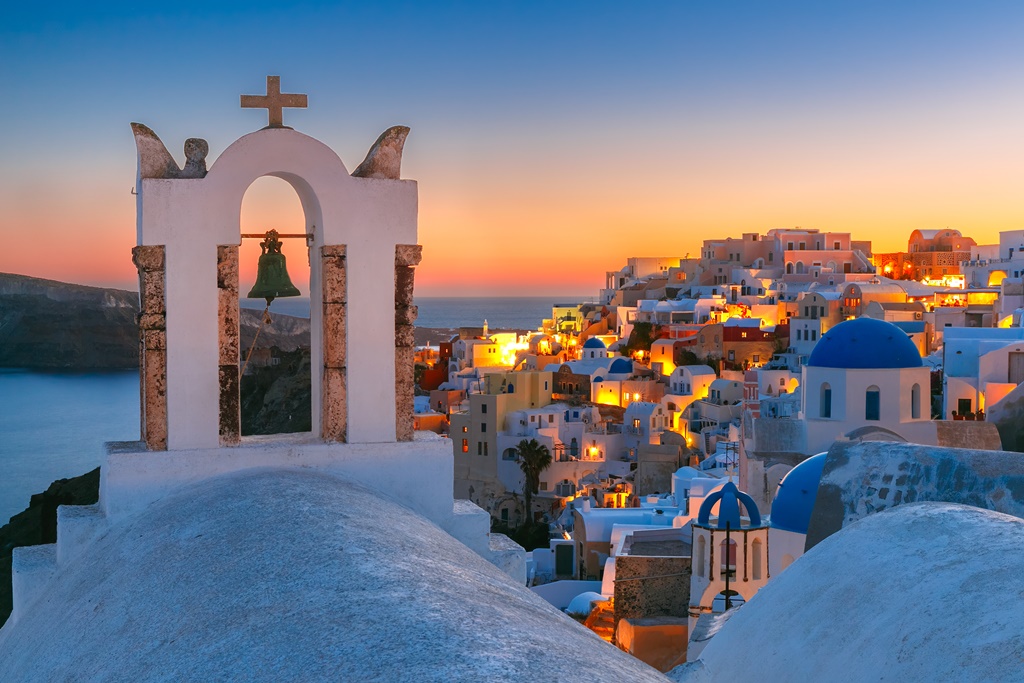 The famous cosmopolitan island of Mykonos is also a well-known Greek destination. However, the heart of the island called Chora or Mykonos Town is like a Greek fairytale that must be seen. The town is another perfect example of Cycladic architecture that features white and blue colours. Its narrow cobbled streets let you wander endlessly and explore the stylish bars, restaurants and fashion stores. There are some places that tell more about Greek history, so don’t miss out on the Maritime, Archaeological and Folklore Museum, Kazárma building, Alefkántra or “Little Venice” and Panayia Tourliani monastery. In the end, if looking for vibrant nightlife after all the sightseeing, Mykonos won’t be disappointing! 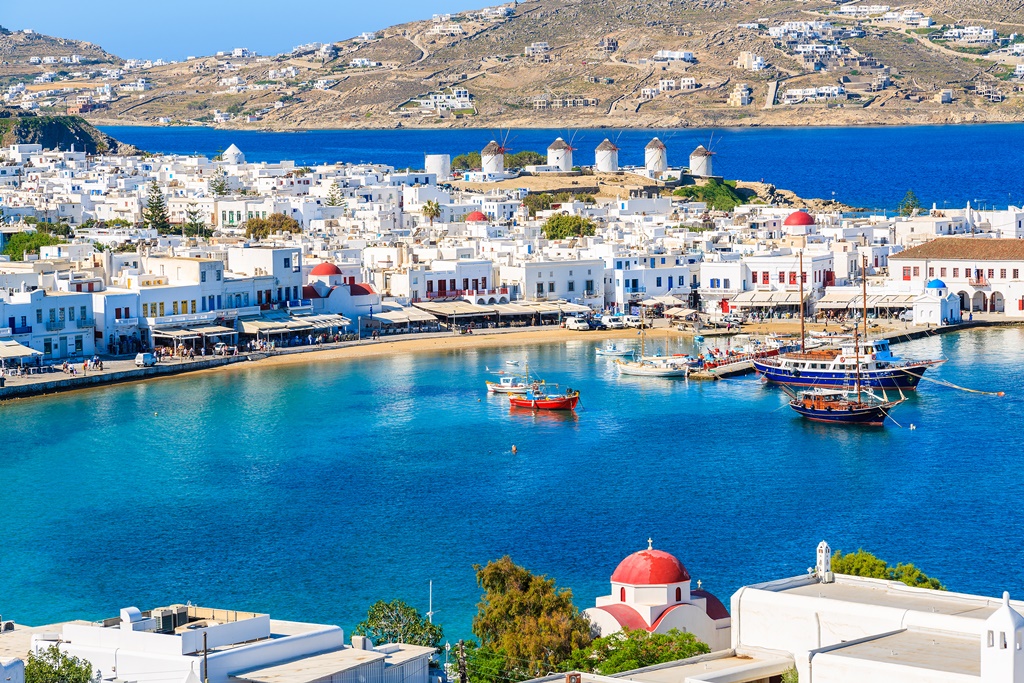 Authentic Greek culture and history await on the island of Ios as well. Being part of the Cyclades, Ios is another example of beautiful Greek architecture with white houses and blue domes. Chora is one of the main places on the island characteristic for its steep cobbled streets that lead to the top where four whitewashed churches sit on the hillside. One more feature that will remind you that you’re on one of the Cycladic islands is the 12 windmills that perfectly frame the landscape. Of course, Chora bursts with charming bars and restaurants that offer Greek specialities. When the sun goes down, Chora offers numerous places to dance the night away. 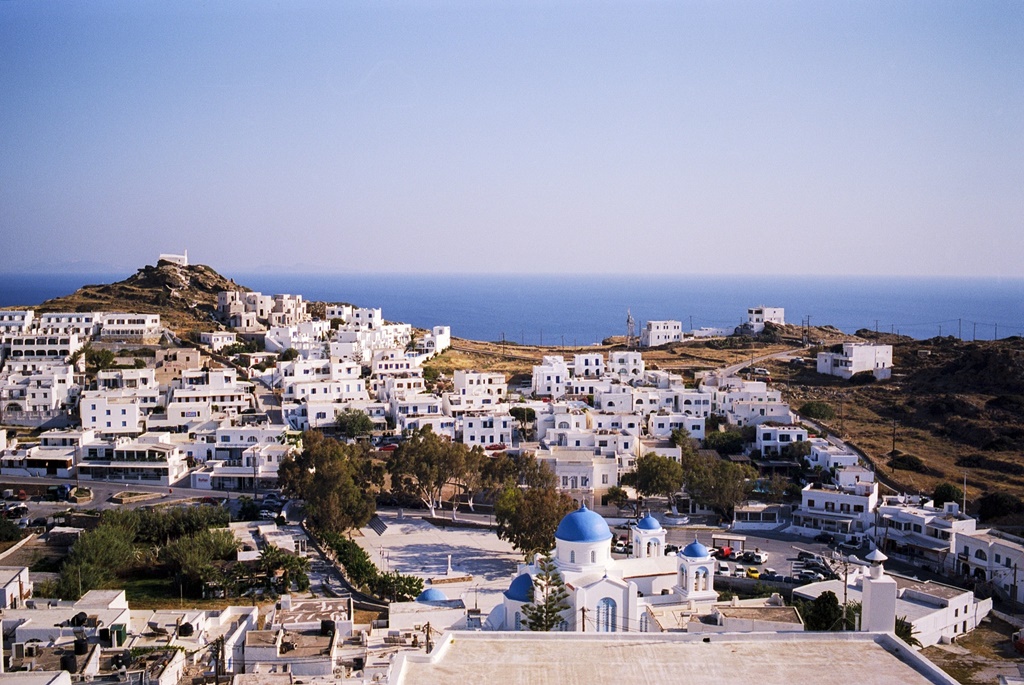 Fiskardo is one of the most beautiful parts of Kefalonia island known for its Venetian architecture, coral-blue sea and luxurious boats anchored in the bay. In 1953, an earthquake hit the island, but Fiskardo remained almost intact providing its authentic look to this day. The event was depicted in the movie Captain Corelli’s Mandolin. In recent years, Fiskardo is becoming the most luxurious tourist resort and a paradise for boaters. You will find some of the most exclusive yachts anchored here. The place abounds in fine dining restaurants serving the best seafood and offering high-quality wines. However, Fiskardo is a great choice for those who don’t mind the crowds and would like to experience a posh vacation in one of the cosmopolitan Greek islands. 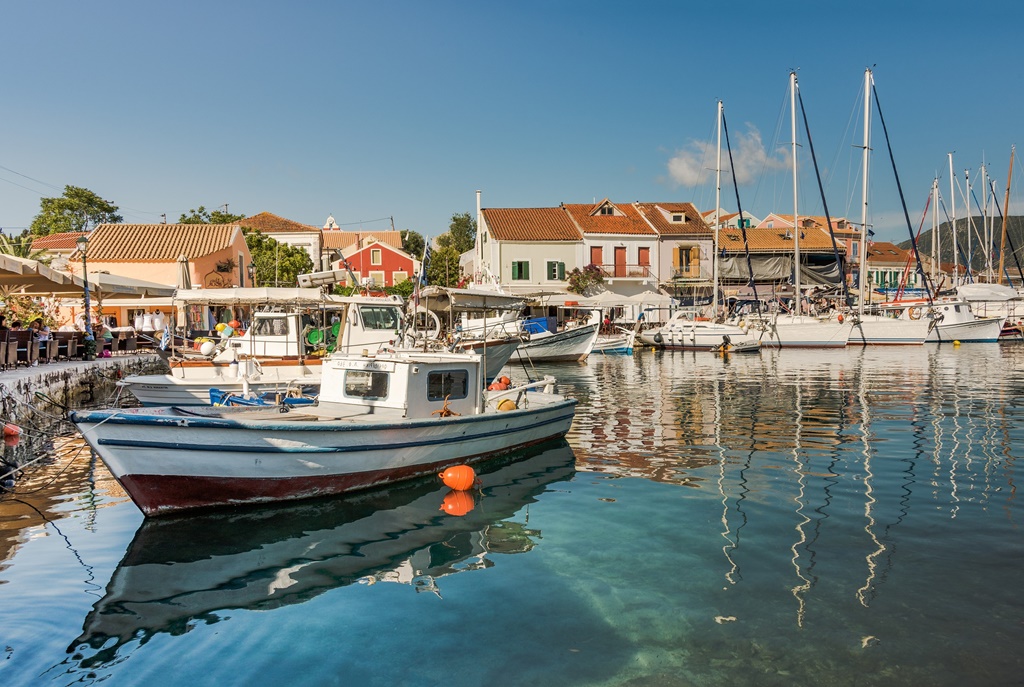 The medieval town of Monemvasia is located on a small island connected to the mainland by the bridge. It is one of the most impressive towns in Greece as it was entirely carved in a large rock. It features a magnificent medieval fortress, town walls and many Byzantine churches. Throughout the past, the island wasn’t connected to the mainland and it was accessible by boat only. Its name literally means “a single passage” which is how it got its nickname The Gibraltar of the East. Although it is a recognized tourist destination nowadays, visiting Monemvasia feels like travelling a thousand years back in time. 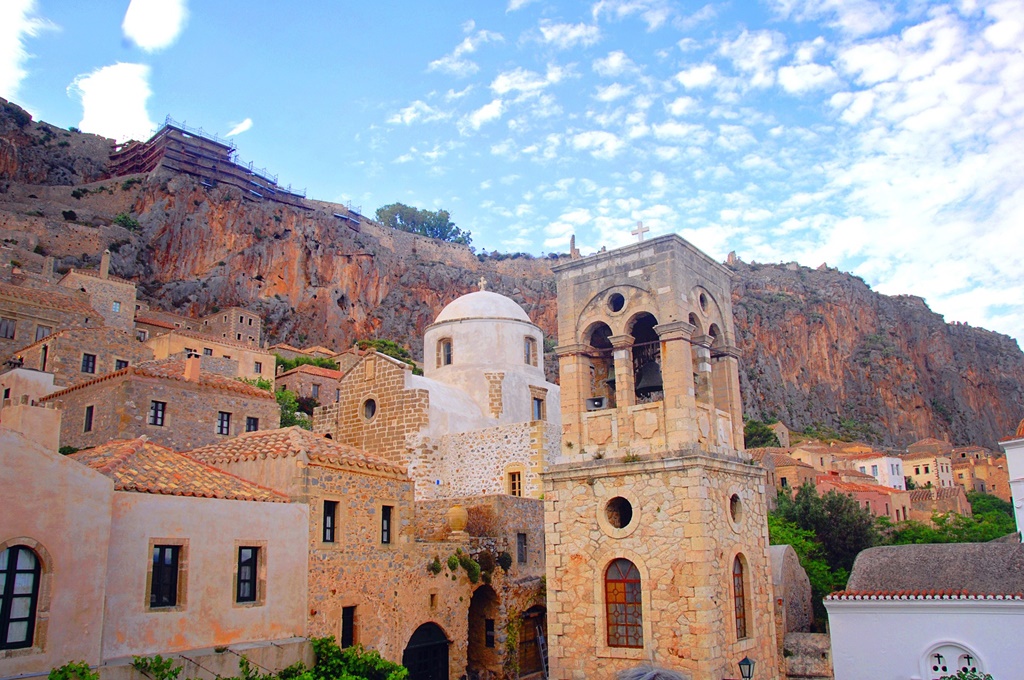 The picturesque small town of Parga offers a perfect summer vacation for everyone who seeks a charming Mediterranean destination. The town is situated in a bay and its main features are the Venetian castle overlooking the city and gorgeous beaches around. Its core consists of colourful houses, tavernas and cafes exuding the laidback atmosphere. Moreover, although the town is situated on the mainland, it feels like one of the Greek islands. Parga is surrounded by lush green areas and crystal turquoise water. There are not many cars and everything is accessible by either foot or boat. 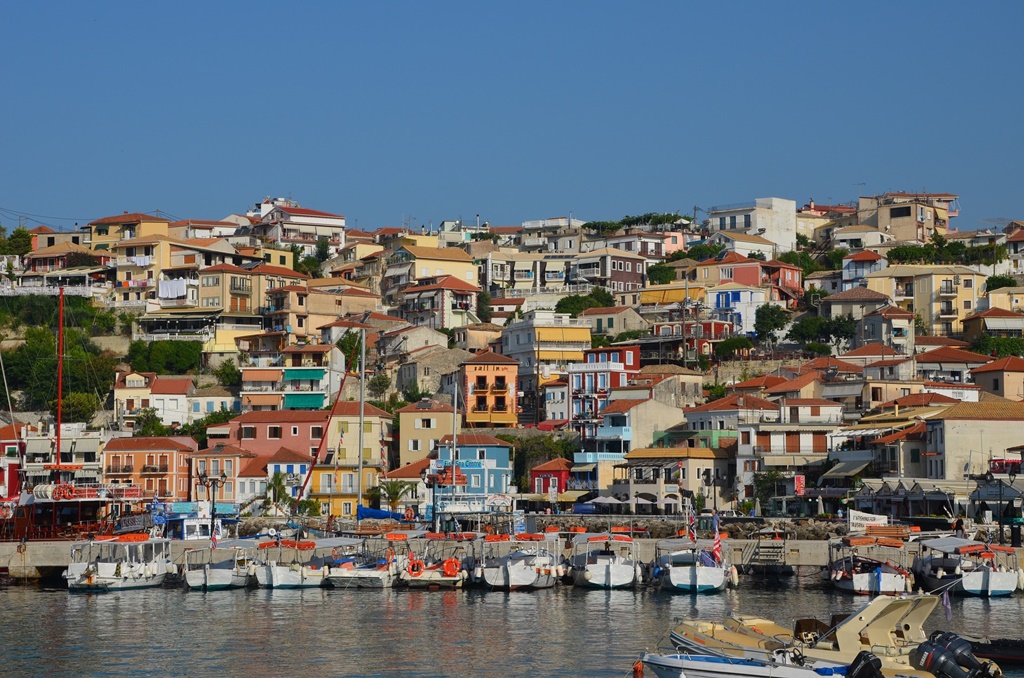 The town of Kalambaka might not be the most attractive destination, especially since it was burned down by the Nazis in WWII and completely newly built. However, this small town is an entrance to one of the most amazing places in Greece and that is Meteora. The giant cliffs of Meteora are an extraordinary geological phenomenon thousands of years old. These gigantic rocks are thousands of years old and locals found them useful for building a safe settlement beneath. Today, It is one of the greatest monuments and monastic centres in the world protected by UNESCO. Besides Meteora, explore all the nearby monasteries, museums and try the best Greek delicacies. 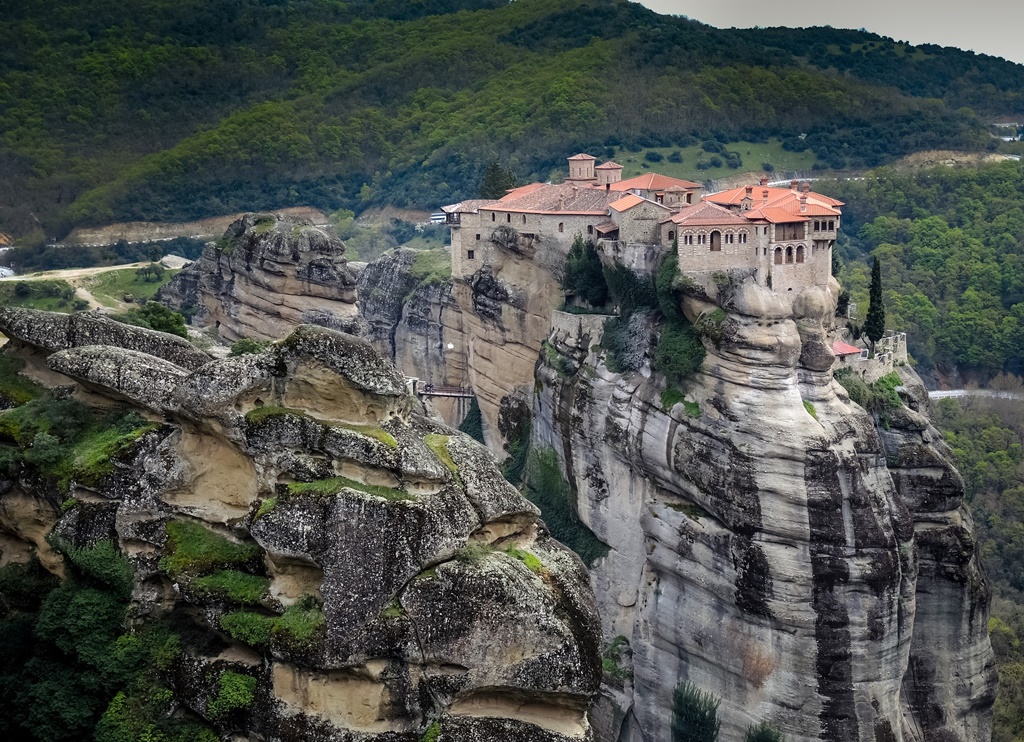 The greenest and the largest island of the Cyclades abounds in traditional villages that reflect the Cycladic architecture and Venetian influence. Its main town is Chora or Naxos Town, overlooking the island of Paros. It is a mountainous town that features whitewashed houses, long stretches of beaches and the ruins of the Temple of Apollon on a nearby islet connected by the path. The charming streets of Naxos will completely exceed your expectations of the authentic Greek atmosphere. Stroll the picturesque streets and take a hundred of photos, sit down in a lively bar and buy some authentic Greek souvenirs. 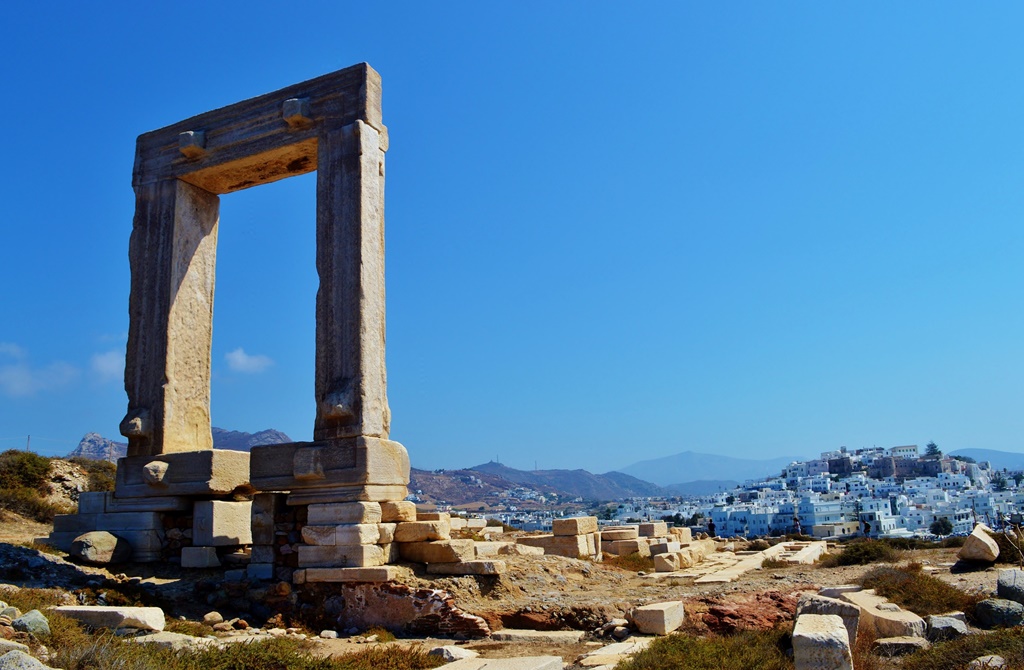 Unlike marvellous Greek islands, Metsovo is a great mountain escape that offers a slightly different atmosphere. While all the previous destinations are attractive during the summer period, we recommend Metsovo as a winter destination. The fact is, Greece is about 80% a mountainous country, so many visitors simply miss out on these places. Metsovo is a town of rich cultural and historical background that cherishes a lot of traditions. Wooden houses and cobbled streets hide numerous taverns with local cuisine, but they also lead to many historical sites. Winters are reserved for skiing and snowboarding in one of several ski resorts in the mountains. 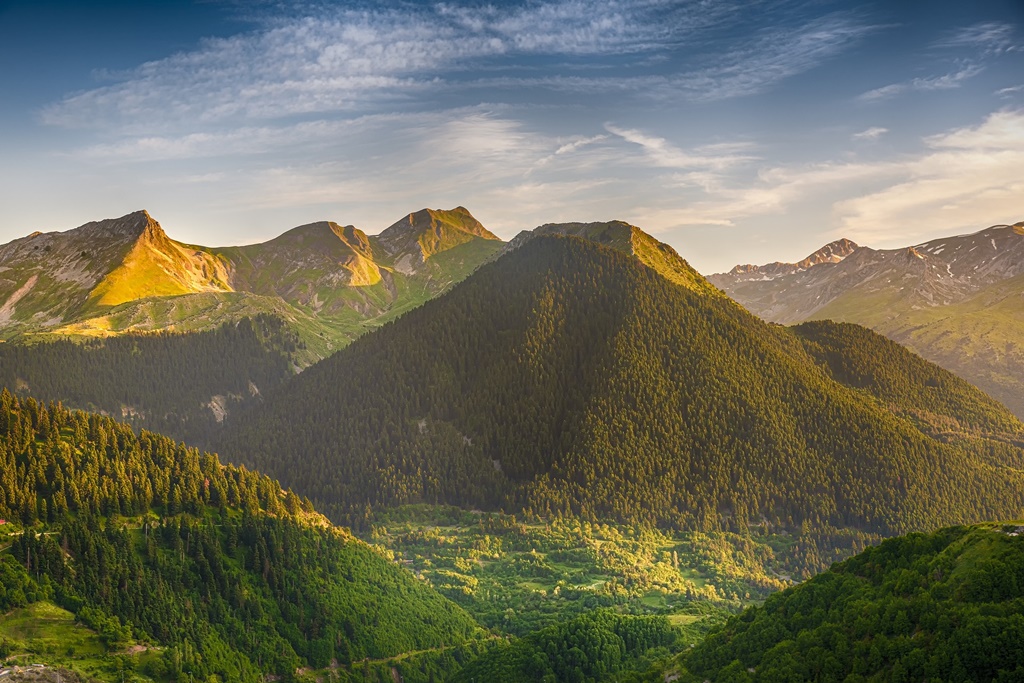 According to Greek mythology, Nafplio was founded by the son of Poseidon and the daughter of Danaida. This reveals the long history of Nafplio which was also the first capital of Greece. Today, it is known for the magnificent Palamidi Fortress on top of a hill, Bourtzi Fortress in the sea and amazing food. Nafplio is also a great starting point for visiting many nearby ancient sites such as Delphi and Epidavros. Visiting this small town is all about relaxing at the beaches, strolling the romantic streets and discovering ancient ruins. What more do you need? 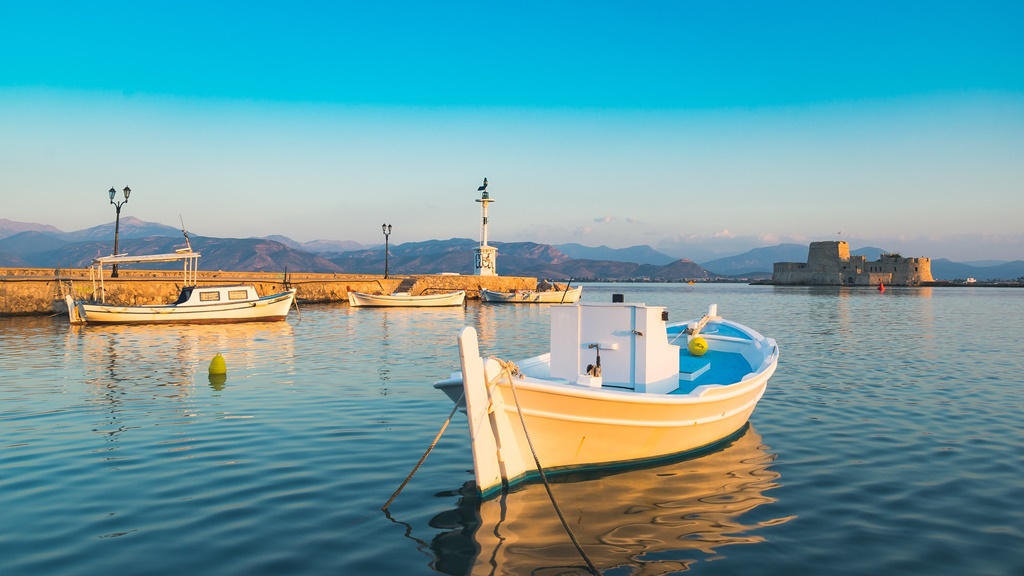