Most unusual and unique buildings in Europe

European architecture is definitely the most diverse in terms of architectural styles which were changing over the centuries. From ancient Roman architecture to modern and futuristic-looking buildings, all those works are definitely worth of admiration. For our list, we have selected top 15 most interesting buildings which comprise both old and modern pieces of architecture which include museums, churches and residential buildings. So, let’s check them out!

Guggenheim Museum was built in 1997 and it was projected by Canadian architect Frank Gehry and it represents one of the best examples of modern architecture in the 20th century. The museum is part of the Guggenheim Foundation which aims to promote the understanding of modern and contemporary art. In 1997, when the museum was constructed, it was the largest museum of all the Guggenheim projects. However, another Guggenheim Museum is currently under construction in Abu Dhabi and it will be two times larger than the one in Bilbao. 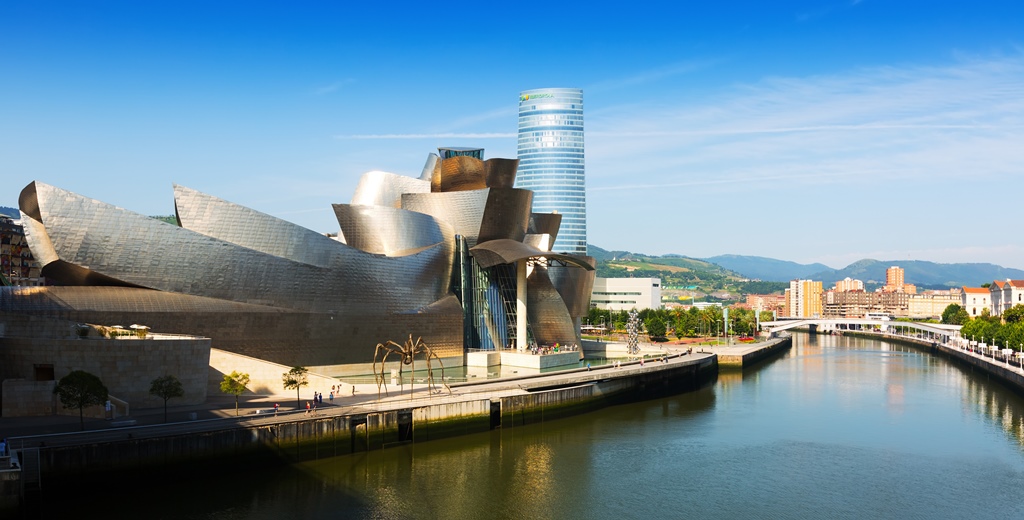 In case you’re visiting famous ski resort Zakopane in Poland, don’t forget to check out the so-called Upside Down House (Dom Do Gory Nogami in Polish). It is a tourist attraction  which attracts more and more visitors every year due to its unusual shape. The thing is that everything in this house is put upside down – tables, chairs, even the bed and toilet. People who visit it usually get confused and dizzy because it is such a strange experience, but the fun is guaranteed (some even claim it makes you feel drunk!). The entrance fee is only 2€. 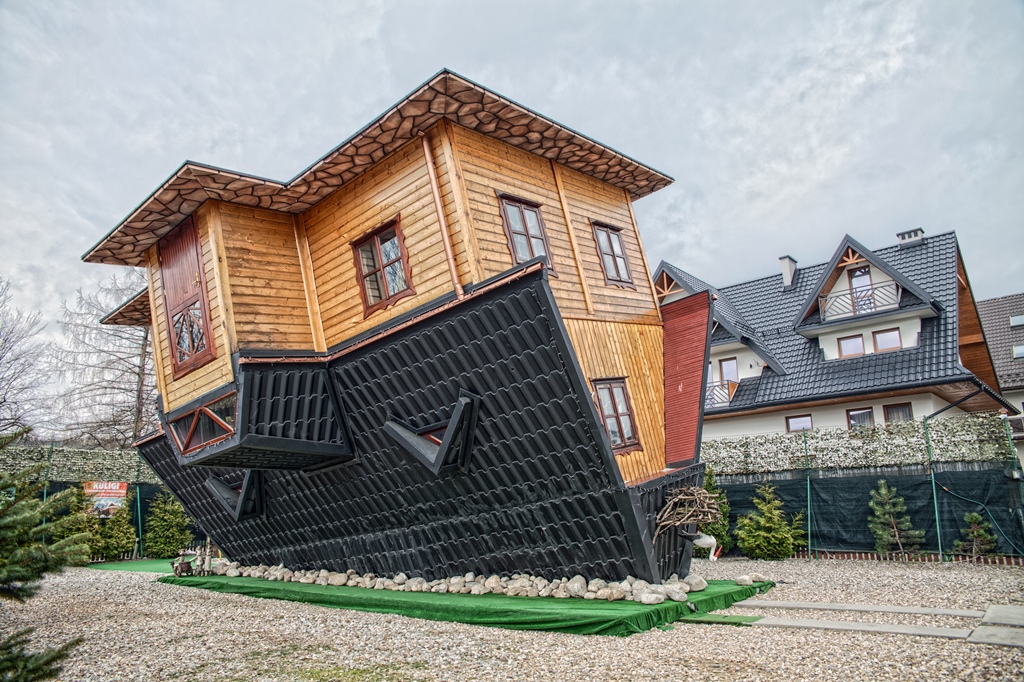 Krzywy Domek or literally translated as the “crooked house” is probably the most iconic building in Sopot, Poland. It was built in 2004 as a part of the shopping center in Sopot. Its “wavy” shape was inspired by fairytale illustrators Jan Marcin Szancer and Per Dahlberg and also by Antoni Gaudi’s houses in Barcelona. Inside the Krzywy Domek you’ll find a coffee shop so you can grab a cup of coffee and enjoy in this wonderful piece of modern architecture. 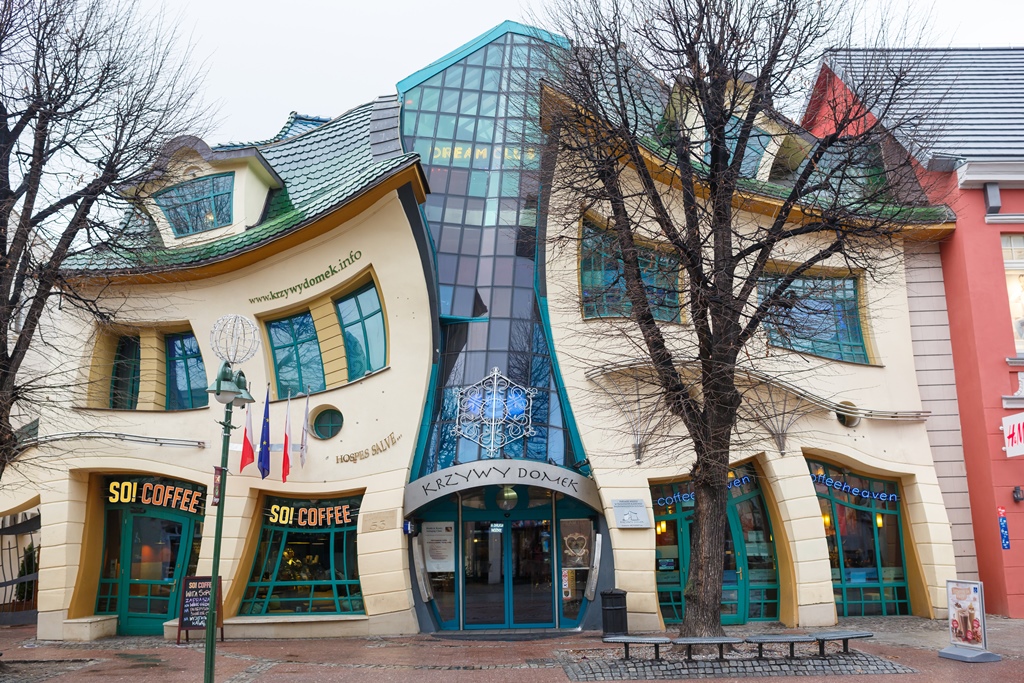 Market Hall in Rotterdam is both office and residential complex in the center of Rotterdam. It houses more than 200 apartments and 4-storey car garage with the capacity of +1000 cars. But why is this building so special? First of all, its facade is covered completely in glass while the interior is covered with 11 000m2 of artwork done by Arno Coenen. The artwork consists of vivid juncture of flora and fauna and it was done via 3D digital technology and it was among the first buildings to use 3D techniques. Some even like to call it “the modern Sistine Chapel”. 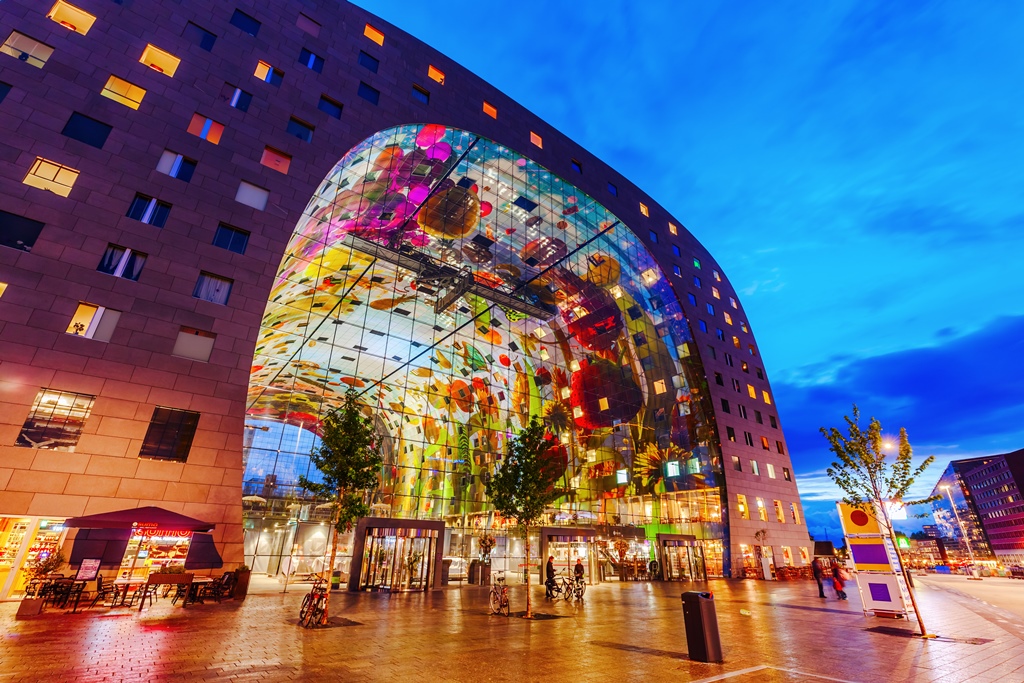 Also known as La Pedrera, Casa Milà is the last architectural masterpiece of Antoni Gaudí before he entirely dedicated himself to projecting Sagrada Familia. It represents a man-made mountain with numerous irregular shaped windows that look like a hole in the cave and balconies, each of which has a unique iron fence. The house actually has two houses,  connected by the facade, the ground floor and the roof. The most interesting part of the house is by far the rooftop. Called “the garden of warriors”, the rooftop is known for its distinctive 28 chimneys which kind of resemble soldiers who protect the roof. Casa Milà was listed as World Heritage by UNESCO in 1984. Initially, the house was built for Roser Segimón and her husband Pere Milà who were the original owners of the house until it became a museum in 1986. 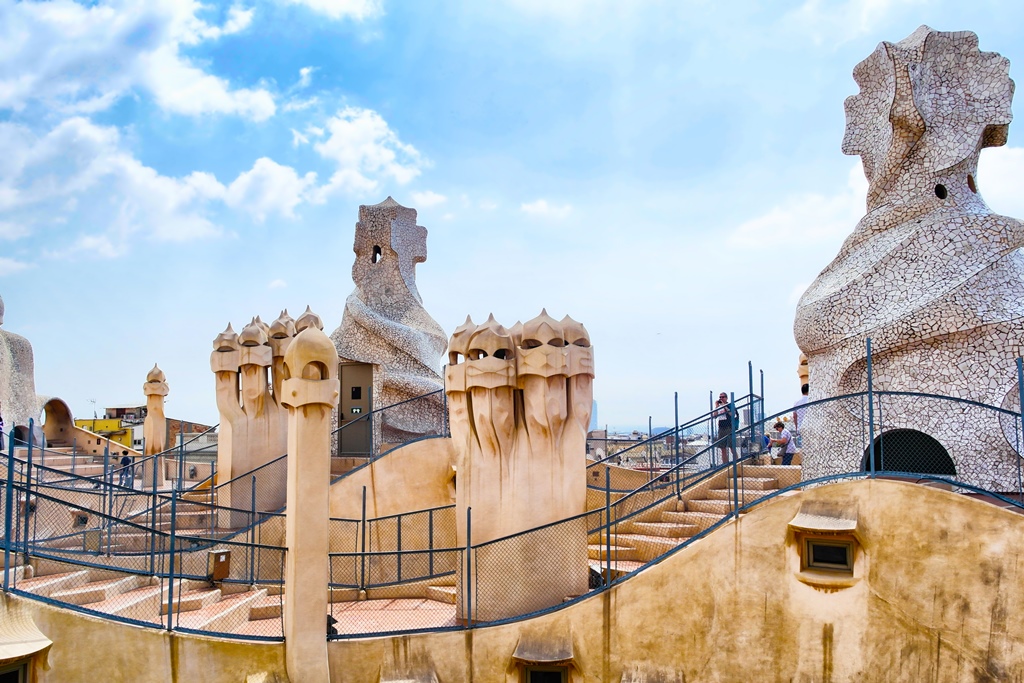 The most famous church in Moscow and possibly the most known monument in entire Russia is St. Basil’s Cathedral. This architectural wonder is listed as UNESCO World Heritage and it is one of the most unusual churches in the world. The cathedral actually consists of eight smaller chappells gathered around the main one, dedicated to St. Basil. The colorful towers have “onion” domes because this shape was suitable for dealing with snow which, we all know, is a common thing in Russia. It was not until the 17th century when the church was painted in the colours we see today – not many people know that original church was actually white (with golden domes), to match the Kremlin’s white stone. 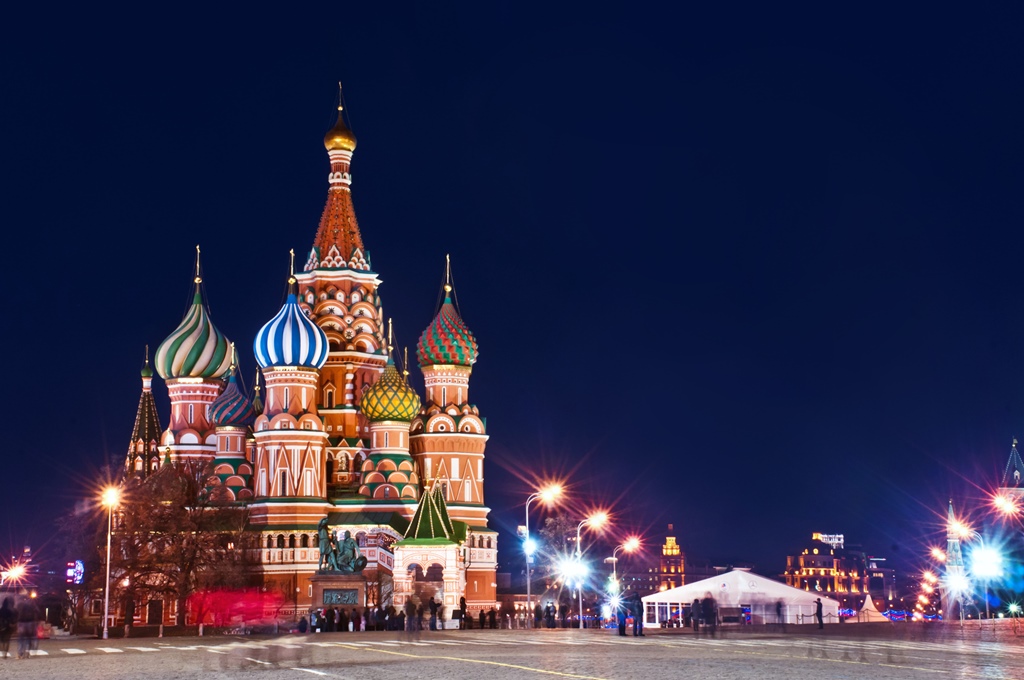 At 74.5 metres, this unique Lutheran Church in the capital of Iceland is the tallest church in Iceland. The style of the church belongs to expressionist architecture style. The unusual shape of Hallimgur Church was inspired by the shape of basalt rocks (similar to those in Giant’s Causeway). Originally, the church wasn’t supposed to be so tall, but the plan was to surpass the Catholic Cathedral in Reykjavik. Visitors are also free to take lift up to the top of the church to have the panoramic view of Reykjavik. 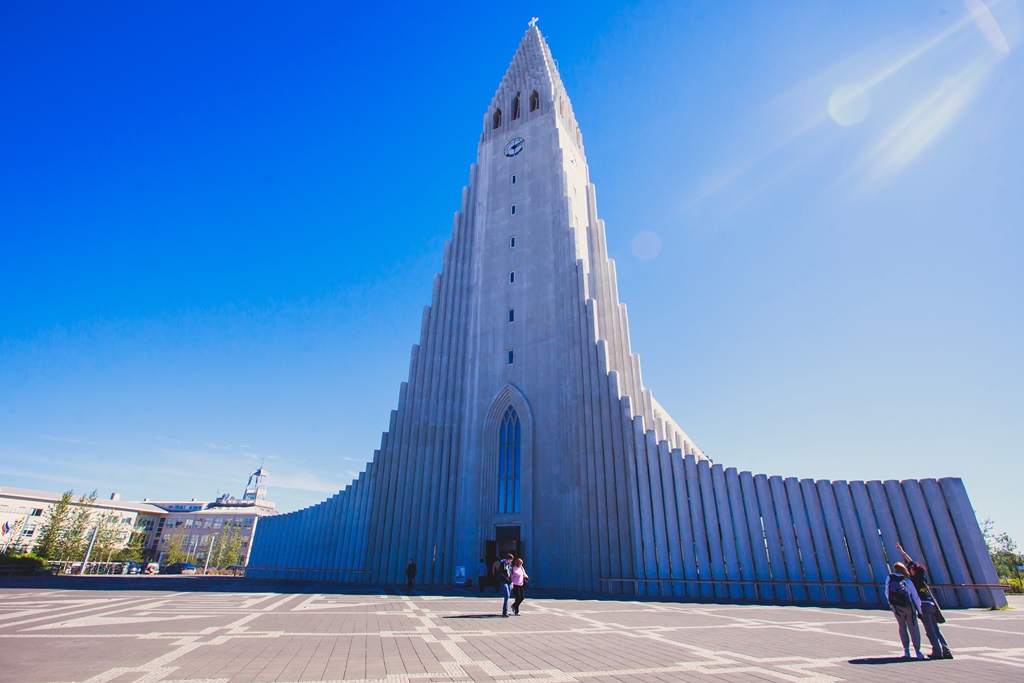 Although it is not actually a building, Atomium certainly deserves a place on this list. This famous landmark in Brussels was originally built for the World’s Expo Fair in 1958 and since then it gets more than million visitors every year. The construction consists of nine stainless steel clad spheres connected in way that they together make a form of a “cell”. Five of them can be visited and you can check out their permanent exhibitions while the top sphere has a restaurant where you can have dinner with the most spectacular view! CNN travel has even listed it as Europe’s most bizarre building in 2013. 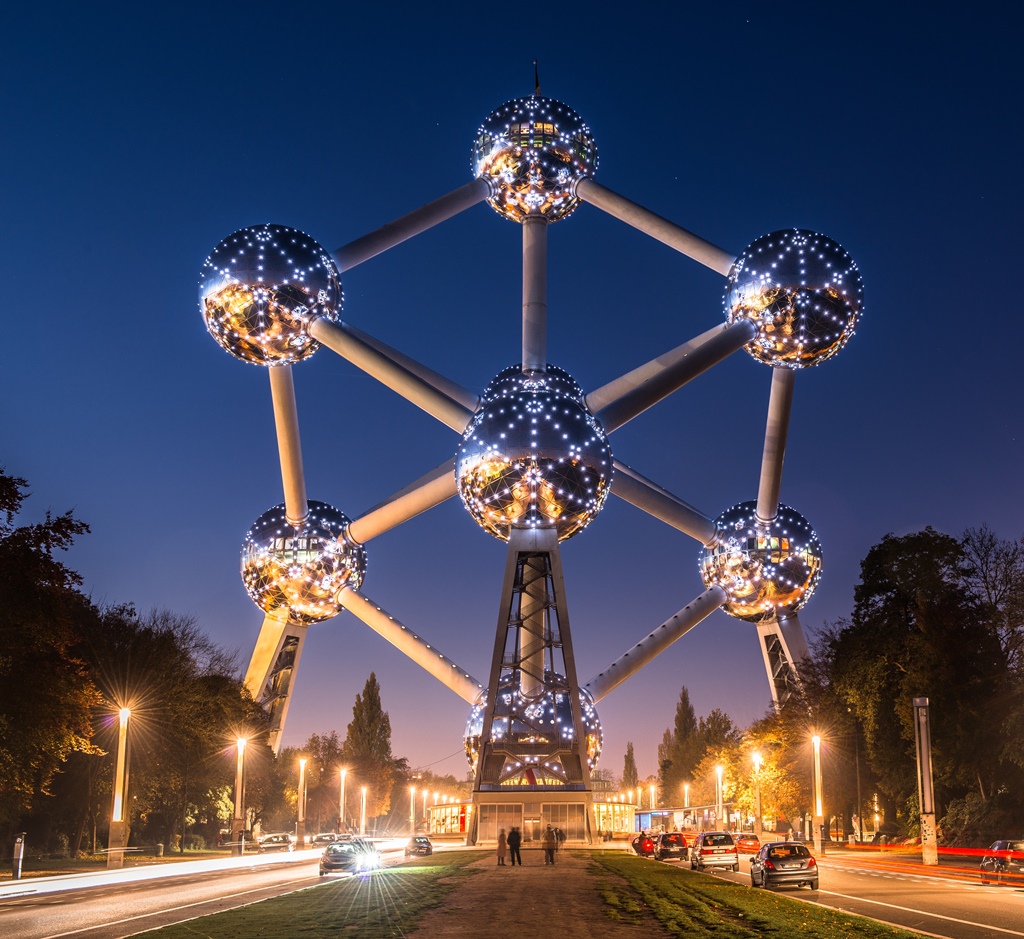 This largest solar furnace is one of the most important science research sites in Europe. Situated in Font-Romeu-Odeillo-Via commune (close to the border with Spain), the Odeillo furnace is in total 54 metres high and 48 metres wide. Why Odeillo – you ask yourselves? The reason to this is because Odeillo has the largest amount of sunshine over the year (more than 2500 hours per year) and thanks to high altitude (1,312–2,212 m), the air is mostly clear and humidity is low. The solar furnace basically works on a principle of rays concentrated by reflecting 9600 mirrors which results in getting amount of energy equivalent to “10 000 suns”. Also, temperatures above 3500 °C can be reached in just a few seconds. 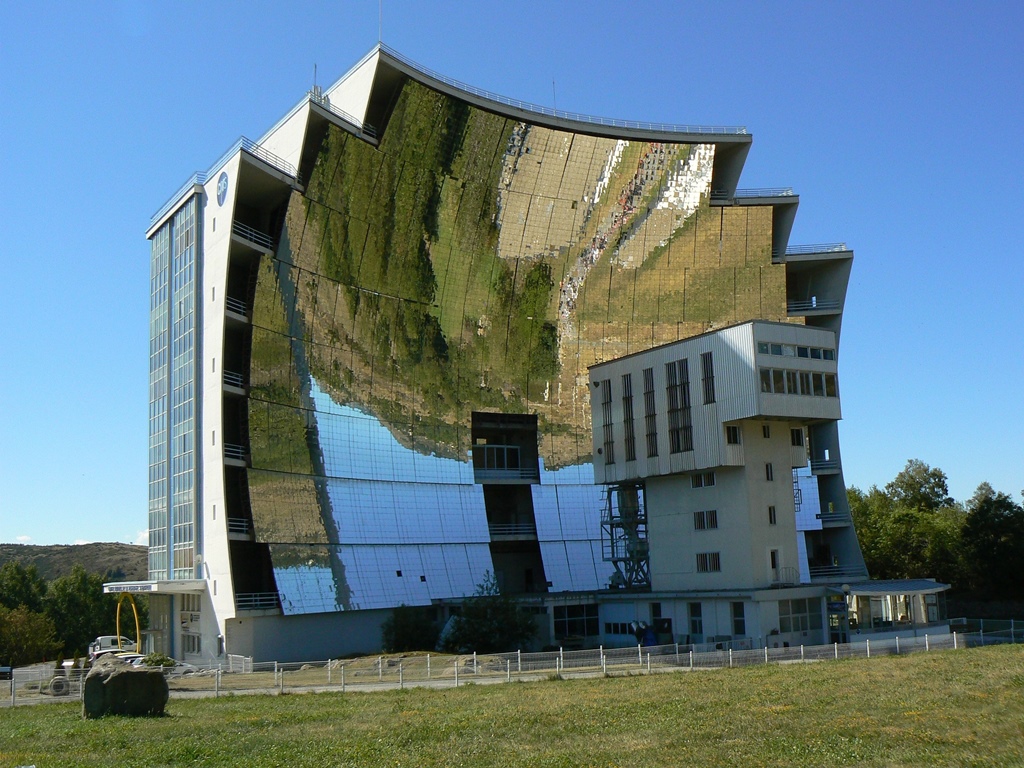 The Waldspirale (or forest spiral in English) is not just another random residential building. This architectural wonder designed by Friedensreich Hundertwasser  is located in Darmstadt in Germany and it was built at the end of 1990s. The specific U-shape of the building is characterized by unique multi colored facade and lack of straight lines. Interestingly, not one out of 1000 windows is the same and the handles on the doors are also different. The inner wall corners are also rounded to match the outer ones. The building has 105 apartments, a garage and a playground for children with tiny artificial lake. Despite its irregular shape, the highest point of the building goes up to the 12th floor. 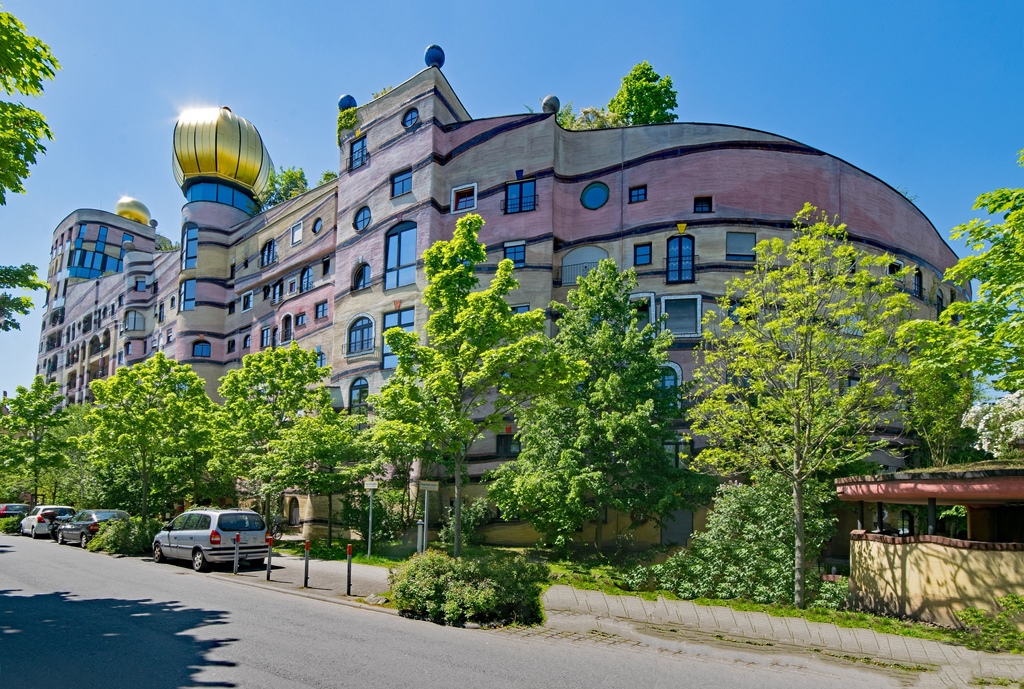 This unusual building in the centre of Prague attracts many visitors every year. It was designed by Czech architect Vlado Milunic in cooperation with Frank Gehry (who projected Guggenheim in Bilbao). Although initially the building supposed to be oriented towards culture and art, it eventually became business building with offices and a French restaurant on the last floor. The windows have convex frames similar to those of paintings because the intention of the designer was to make them have a 3D effect. 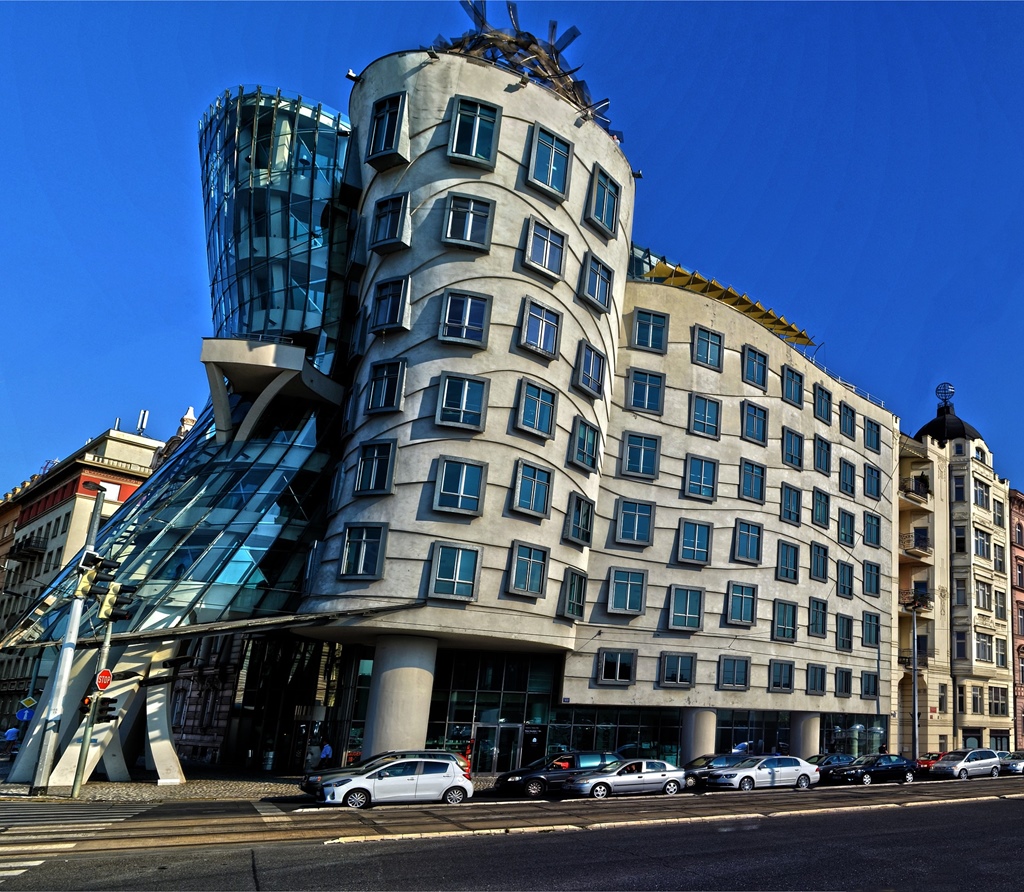 Another interesting construction in Rotterdam are the so-called Cubic Houses. These innovative houses are located near the Blaak Subway Station in Rotterdam and there are actually people living inside these cubes. Since these houses often attract curious passers-by, one of the house owners decided to make money out of it by making one of the “cubes” available for tours, so if you find yourself in Rotterdam, make sure to pay a visit to this magnificent architectural wonder. 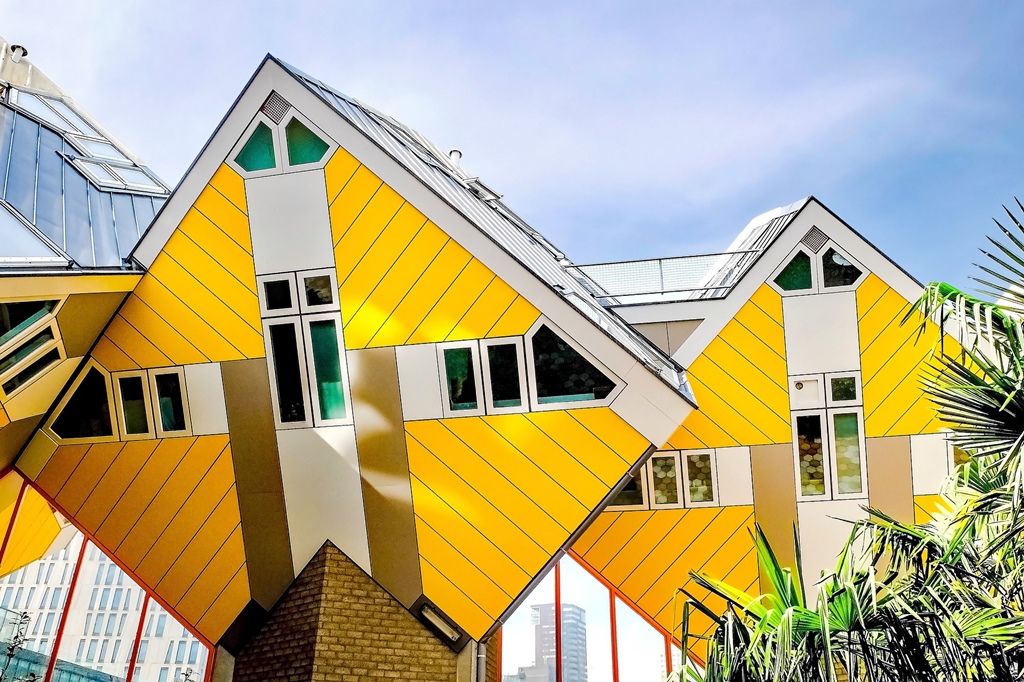 National Library in Minsk is the third largest library in the world when it comes to collection of Russian literature but that is not what makes this building so special. The library is 72 metres high and it is one of the best equipped libraries in Europe and it even has its own electronic resources. Besides being a multimedia library, it is also a popular tourist attraction since the visitors are able to climb up to the viewing platform and get a spectacular view of Minsk. Very often the area in front of the library serves as exhibition and concert venue. 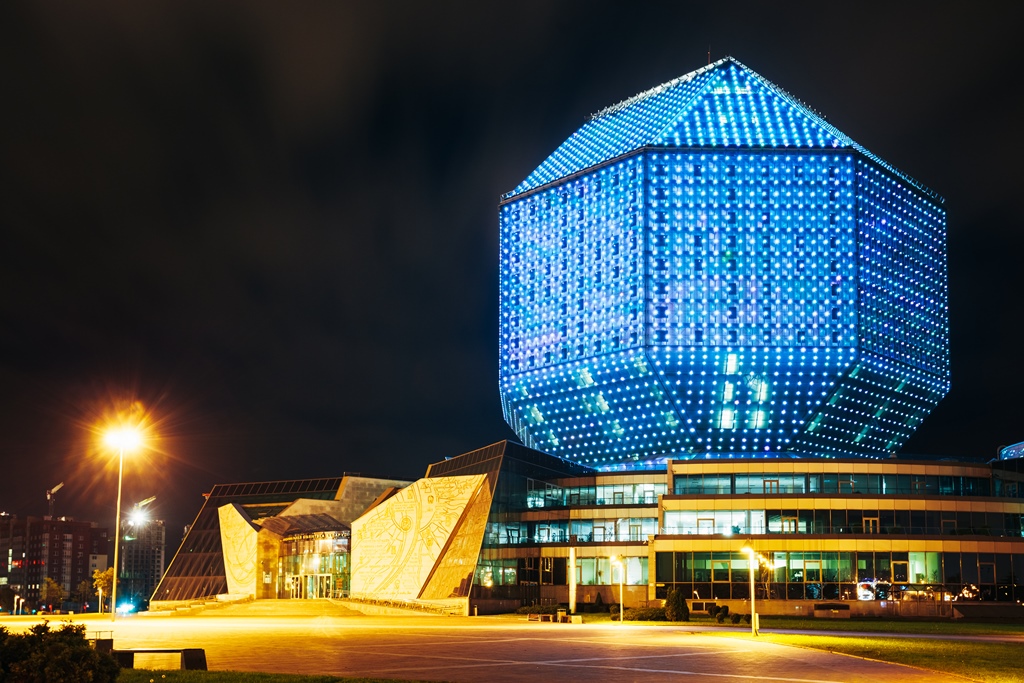 Barcelona is, we could say, the “capital” of extraordinary architecture, mostly thanks to Antoni Gaudi. Besides the worldwide famous Sagrada Familia, there is one more church outside the city center which will definitely take your breath away. Standing almost 550 metres above the sea level, on Mount Tibidabo, this magnificent church gives an unforgettable panoramic view of Catalan capital. The church was actually inspired by other two churches which carry the name of Sacred Heart (Sacré-Cœur in Paris and Sacro Cuore in Rome) and it has a statue of Jesus on top which resembles the one in Rio de Janeiro. The entrance to the church itself is free, but if you wish to take the elevator up to the viewing platform, it will cost you 2€. 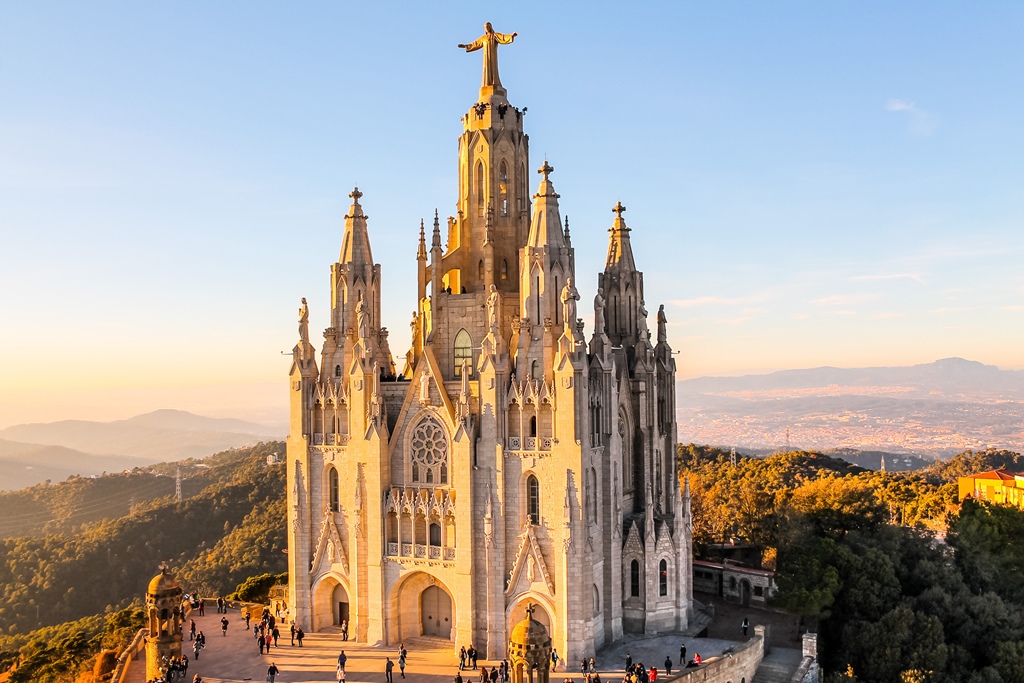 Also known as the Graz Art Museum, this futuristic-looking building in the heart of Graz will definitely catch your eye. The building is relatively “young” since it was built in 2003 for the purpose of European Capital of Culture programme. The museum has a shape of a robotic heart  which makes it stand out from the typical Austrian architecture. The surface of the museum has almost 1000 fluorescent rings which create different patterns at night, and what’s best, most of the power energy of the museum comes from solar panels on the roof. Whether you’re an art fan or not, this masterpiece is definitely worth of visiting! 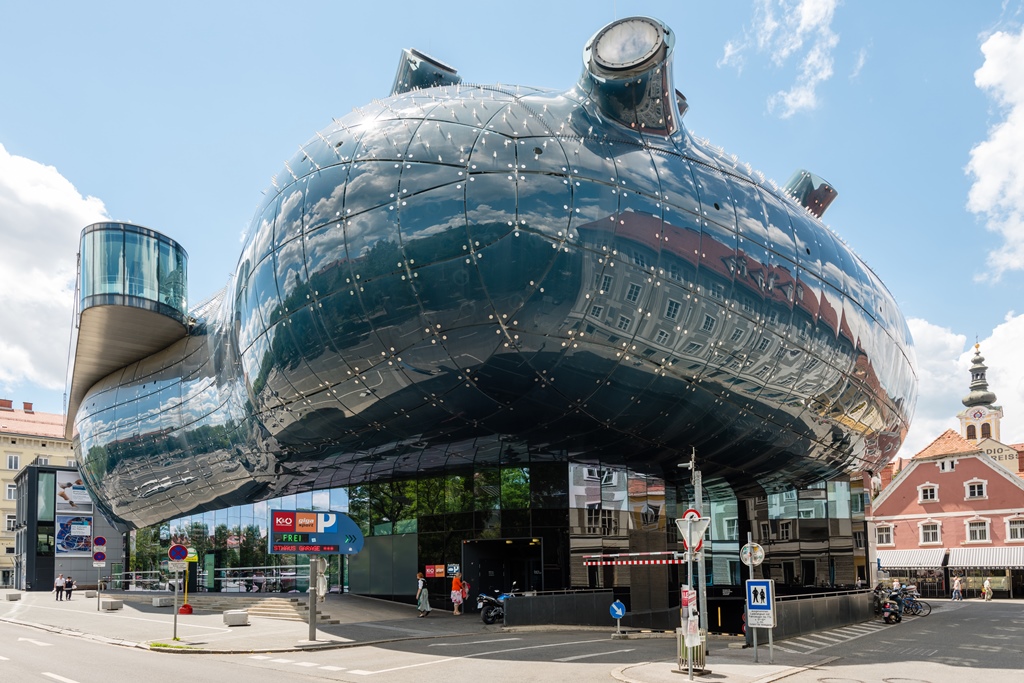