Best cities to visit in Argentina

The second-largest southern American country is known for its beautiful nature and vivid culture. But, what is special about the bigger cities is that each of them offers both cultural sights like churches and museums. At the same time, it is an access point to a variety of natural wonders and activities. Also, their eclectic mix of architectural influences, stunning Andes landscape and wine culture make the cities of Argentina even more appealing.

Here are our top 10 suggestions of the best cities to visit in Argentina that will make you want to explore the beautiful country even more!

The capital of Argentina is a cosmopolitan city that draws its visitors with a mix of traditions and cultures. The first place you’ll notice it is the city streets. Here, you will find a mix of the native American, European, but also Middle Eastern influences. And the best way to explore it is to visit the colorful neighborhoods of La Boca or San Telmo. The latter has cobbled streets. On Sundays, it becomes a center of vendors with their craft stalls alongside musicians performing. Besides here, performances are taking place in numerous theatres. Then, of course, tango! You can learn to dance it in milongas or just observe spontaneous Argentinians dancing in the streets. Similarly to this, their dedication to football cannot be neglected. Buenos Aires is packed with stadiums and the biggest event is Superclasico when the biggest teams play against each other. 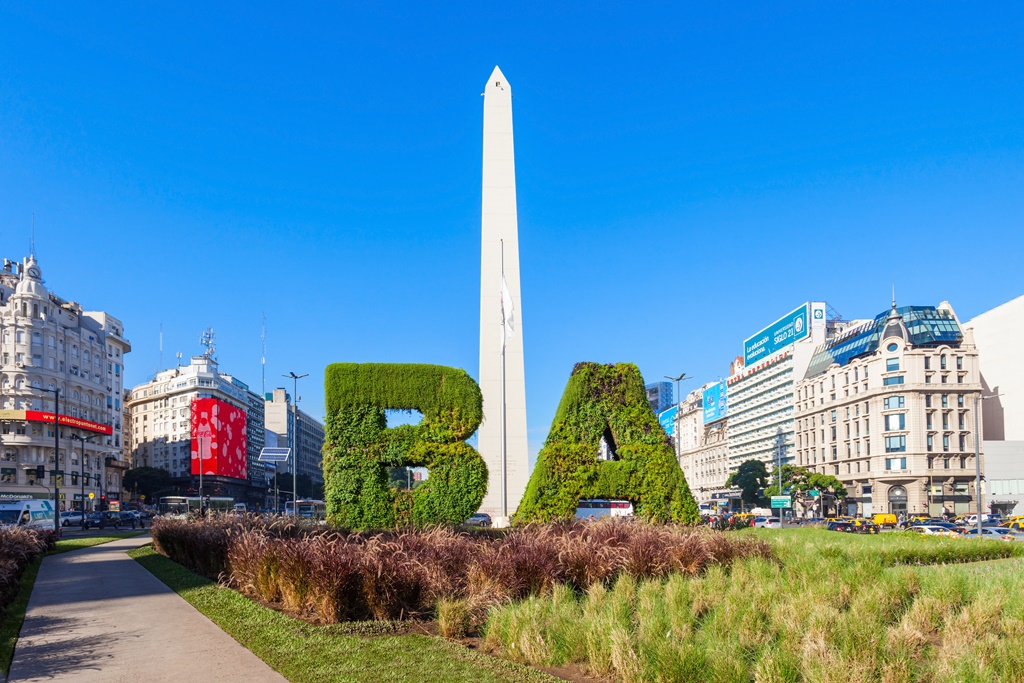 Mendoza is situated in Mendoza province, right at the foothills of the Andes. This city is popular among wine connoisseurs since the whole region is the largest wine producer in the country. When in Mendoza, visitors like to visit the vineyards on one-day trips and try out the Argentinian wines. Malbec surely stands out among them. As for the city, wine lovers can also visit the National Wine Museum. Then, they can stroll and relax on the square called Plaza Independencia. Especially on Sundays when locals organize a handicraft market. Another green area is the San Martin Park. It is an access point to hiking the Glory Hill where the Army of the Andes monument is situated. 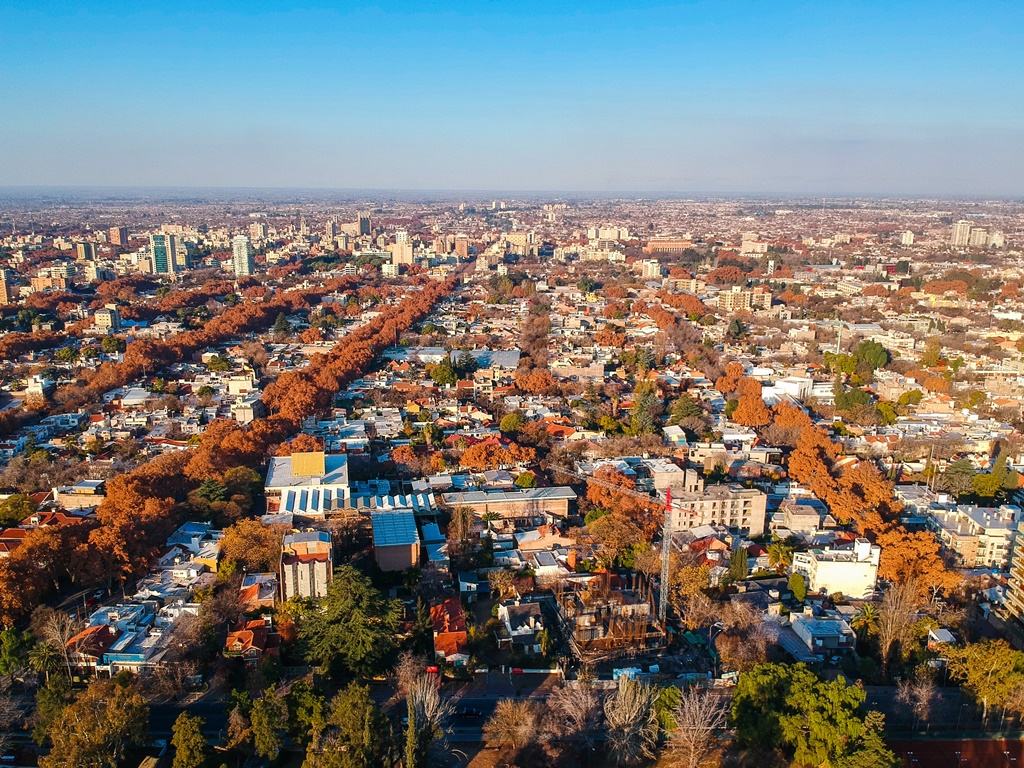 San Carlos de Bariloche is situated in Rio Negro province, more specifically in the Nahuel Huapi National Park. It is very different from the other cities on the list. The reason is the Swiss and German-inspired architecture or the snow-capped Andes Mountains landscape. The city centre also comprises Museo de la Patagonia in Centro Civico building, La Catedral de San Carlos de Bariloche and many chocolate and cake shops. One Italian immigrant founded the first one. Today, a visit to a chocolate shop is unavoidable for anyone who visits. Since San Carlos de Bariloche is situated right on the edge of the Nahuel Hapa glacier lake, kayaking is one of the most interesting attractions. Also, right from the city, you can go hiking the Cerro Lopez peak. There, you will get stunning views of glaciers and mountains.

Ushuaia is the capital of Tierra del Fuego province and is a pretty remote spot. It is even the most southern city in Argentina and also the most southern city in the world. It is situated on the Tierra del Fuego island and surrounded by snow-capped mountains. Whereas, in the south, there is the Beagle channel. That means that the city is the gateway for trips to Antarctica. Also referred to as “the end of the world”, it is where Darwin formed his theory of evolution. When here, you can either enjoy the views, souvenir shops or the charming city’s museums. But also, you can set out to hike or visit Tierra Fuego National Park. Or, if you are adventurous, sail to the famous Punta Arenas via Cape Horn to get views of the glaciers, forests and penguins. 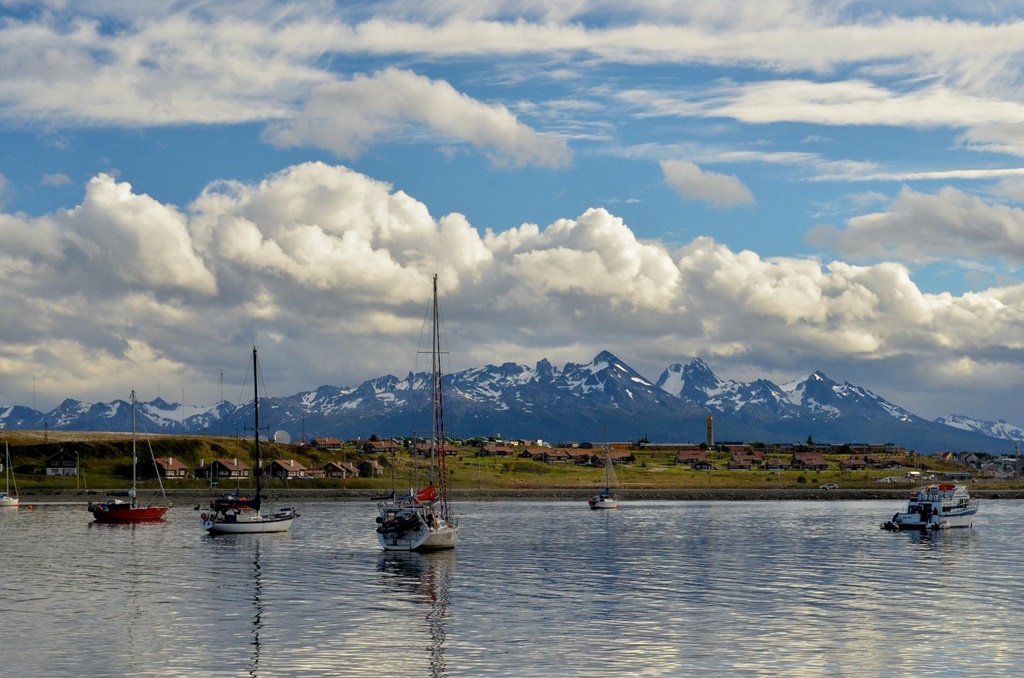 When in the second most populated city in Argentina, you should visit the city centre which is special for its architectural variety from colonial Spanish to Gothic monuments. There are also many theatres and museums like Evita Fine Arts Museum that host works from Picasso. In Cordoba, there are many historical monuments like the Cordoba Mosque and the Jesuit Block. The latter is a complex of buildings constructed by the Jesuits. It consists of a church, Jesuit priests’ residence and Cordoba University, later protected by UNESCO. Moreover, Cordoba is a lively university city. Here students hang out in a park called Parque Sarmiento and party all night in the Nueva Cordoba neighborhood. Some more partying spots include the Guemes neighborhood, also known for galleries and boutiques. 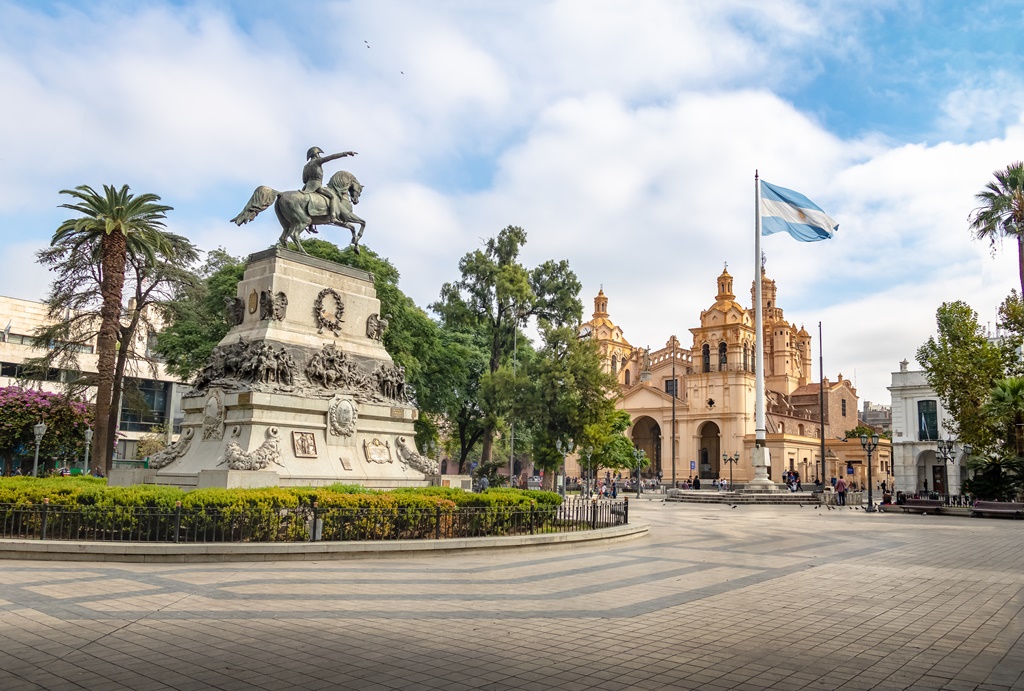 One of the most visited places in Argentina is the Iguazu National Park. Therefore, visitors stop by Puerto Iguazu, as well. The park is famous for its waterfalls and cascades recognized as a World Heritage Site by UNESCO and one of the Natural Wonders of the World. The most famous waterfall is the spectacular Devil’s Throat, the access trail to which is easily accessible by train. Furthermore, another interesting site is the viewpoint called Three Borders Landmark. It is situated at the confluence of two rivers, Ríos Paraná and Iguazu. What’s interesting is that the viewpoint offers a view of Argentina, Brazil and Paraguay. If you are visiting the national park, you should not miss it, or the light show of the mist held in the evenings.

Puerto Madryn is the second largest fishing port in the country situated in the province of Chubut. It is one of the best places for whale watching and the best place for scuba diving or snorkeling with sea lions. Especially at Punta Loma. As the whole area is an important marine place, visitors often choose a trip to Peninsula Valdés or to Punta Tombo. Furthermore, the Eco Centre interactive museum is where you can learn a lot about marine wildlife. Besides, the city shows a great influence of the Welsh community who settled here in the 18th century. This can be seen in the Eisteddfod music and poetry festival held in August.

Salta city is the capital of the region of the same name. It often gets overlooked as the region has a lot to offer, like its vineyards in the city Cafayate. However, the centre of Salta city is for a reason called “Salta la Linda” (Beautiful Salta). Its city streets are filled with Hispanic architecture, some of which being the red and gold San Francisco’s Church and Cathedral of Salta, situated right on the main square. It is called 9th of July Square and is perfect to explore the buzz of the city as it is filled with shops and restaurants. To get a great view of the city you can climb or go by cable car to San Bernardo Mountain from San Martin Park. As for the food, you cannot miss a dish that originates from here – empanadas. 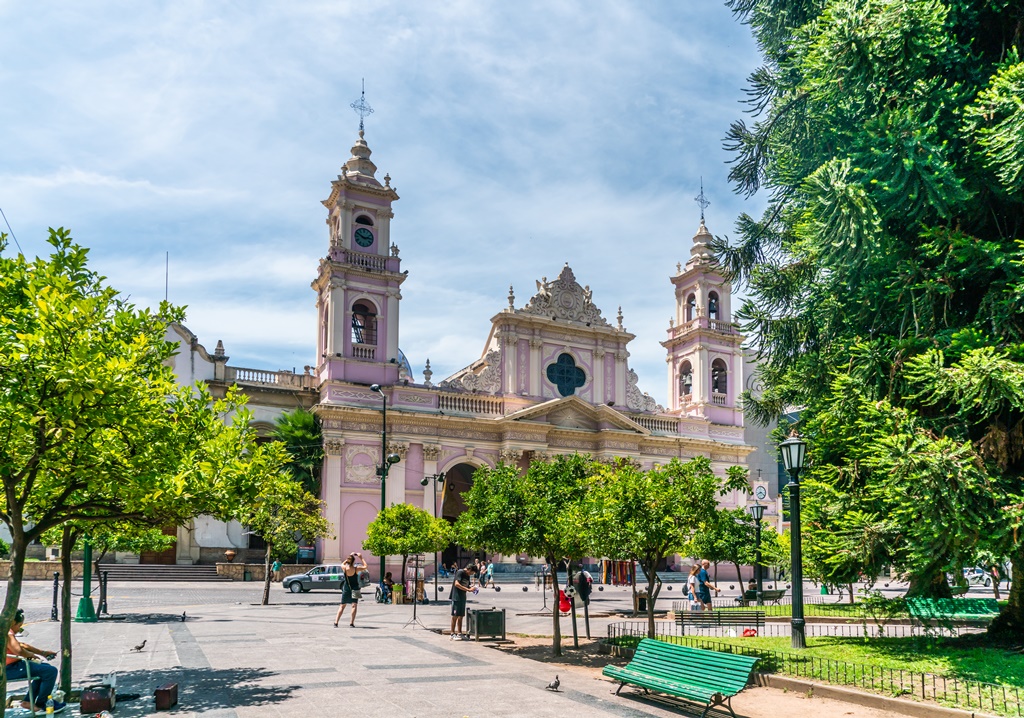 “Mardel“, as the locals call it, is situated in the Buenos Aires province and is the most visited city after the capital. It is most famous for its beaches like Playa Grande, Playa Varese and Playa Iglesia. However, one of the biggest attractions is the wharf Banquina de Los Pescadores in the city’s 8-kilometers long Mar del Plata Port. It is one of the most important fishing centres where you can watch the sea lions and ships, snacking on fresh calamari. Like many other Argentinian cities, Mar del Plata offers museums like Museo Municipal de Arte Juan Carlos Castagnino fine arts museum which houses paintings and sculptures from Argentinian artists. For a full view of the city climb or use the elevator to get to the top of another attraction – Torre Tanque water tower. 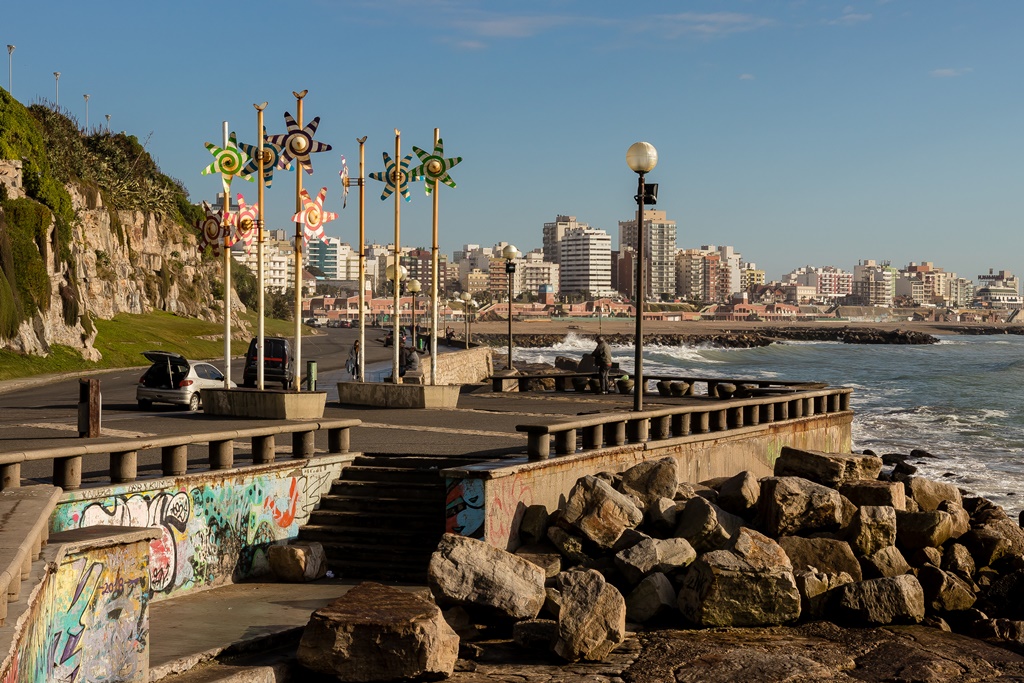 Firstly, Rosario is the third-biggest Argentinian city but is commonly known as the birthplace of Che Guevara and Lionel Messi. It is a port city situated next to the river Parana with a 15km long Costanera waterfront. Here, you can enjoy many of Rosario’s parks or opt for its islands, like Isla Espinillo. Also, Rosario is historically important as it was the city where the Argentinian flag was raised for the first time. To honor it, they built the National Flag Monument that gives a great panorama of the whole city. Regarding art, Rosario has quite a few museums. For example, the Museum of Contemporary Art or the Museum of Fine Arts. It is considered the second-best one in the country. If you want to explore more historic monuments, head to Plaza 25 de Mayo where you will find Rosario’s cathedral Basilica Santuario. 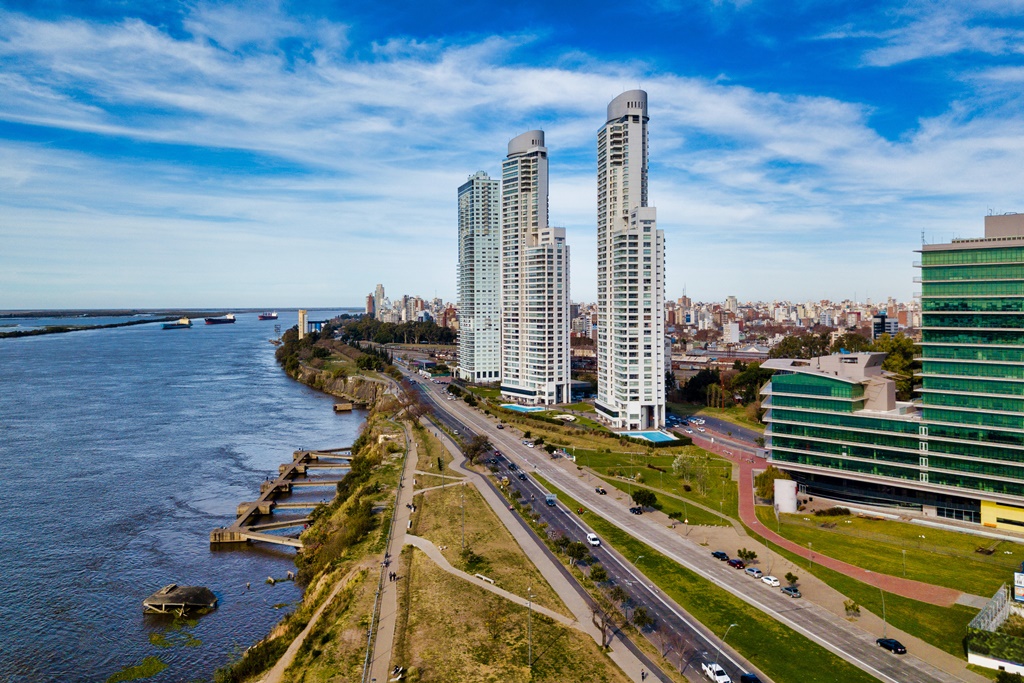