Zadar airport is situated in Zemunik about 11-12 km from the city centre; getting from the airport to the city centre is possible by the following means of transportation.

The airport bus between Zadar airport and the main bus station is operated by the company Liburnija Zadar. The timetable for the bus varies depending on the time of the year. As a rule of thumb the bus leaves the airport 30 minutes after the arrival of a scheduled flight. From the city the bus departs from Liburnska Obala 4 by the old town, departure time is around 1 hour and 30 minutes before scheduled flights (Check onsite); from there the bus drives to the main bus station (Platform 8) to pick up additional passengers before heading to the airport.

The airport bus is parked on the right side when exiting the terminal; it is literately impossible not to notice the departure location.

From the airport the bus first drives to the main bus station in Zadar from where you can change to city, regional or domestic buses. After the passengers get off, the airport bus continues to the bus stop at the old town.

The bus trip between the airport and the bus station takes about 15-20 minutes, 5 minutes longer from / to the stop by the old town.

The price for a one way ticket is 25 Kuna, which includes luggage; return tickets are not available. Tickets can be purchased on the bus. 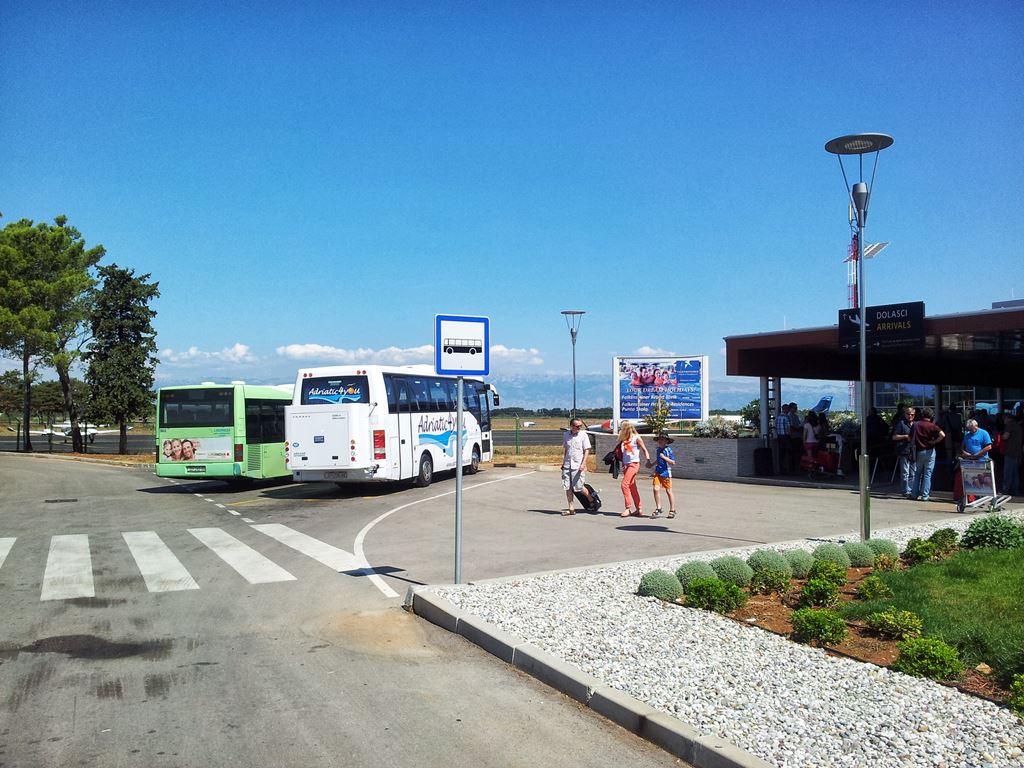 Parking of airport bus in front of arrival terminal

From Zadar airport to town, there are no local / city bus lines.

If you are not staying in the centre of the town, it might be a bit of a hassle taking the bus, especially if you are carrying luggage. In that case we recommend a pre-booked private transfer which costs about 18 Euros for a vehicle for 1-3 persons (30 Euro for 4-8 people). This service is door to door inside the Zadar city area, which means also the city parts Diklo and Borik are reachable for the above mentioned price.  You can book vehicles in various sizes here.

Taxis can be found just outside the terminal building; a taxi from the airport to the town centre costs about 150 Kuna (20 Euro) and to city parts like Diklo and Borik about 30 Kuna (5 Euro) more. It is advisable to agree upon the price before entering the taxi.

If you want to continue your journey outside Zadar, there are numerous options from the main bus station in Zadar, here are some suggestions: 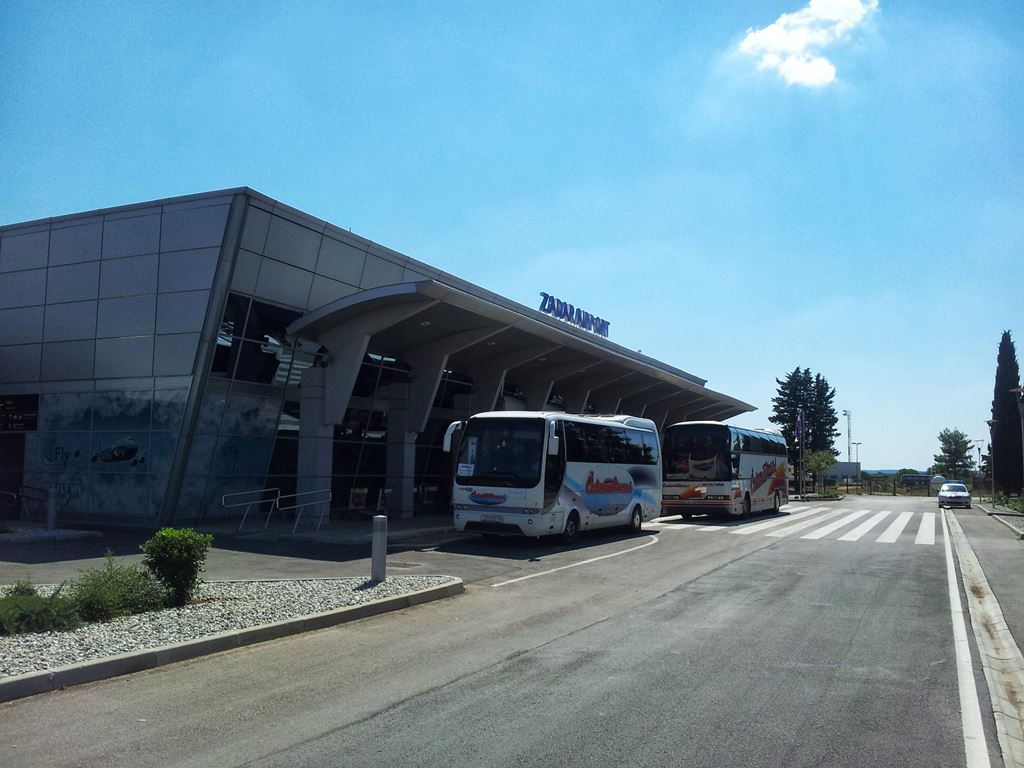 Where can I find the timetable for buses from Zadar airport to Novalja and towns like, Split, Vodice, Sibenik and Tisno?

Take the airport bus to the stop by the old town; the drop off location is basically next to where the ferries depart from.

What is the easiest way to travel from Zadar airport to the cities mentioned above?

The easiest way is to pre-book a transfer from the airport to your destination town or marina. The driver will then pick you up at the airport. The company providing the transfer will monitor whether your plane is delayed or not, so you do not have to worry about this, the driver will be there when you arrive.

How to get to the island of Ugljan or Pasman from the airport?

Take the airport bus to the stop by the old town; the drop off location is basically next to where the ferries depart from.

How do I get to Split airport from Zadar airport?

The cheapest way is to take the airport bus to the main bus station and then take a bus from there to Split main station. In Split you then take the bus to the airport.
The fastest way is to book a private transfer which is quite pricy but it can save you a lot of time. The trip with the bus will take you about 6 hours (Airport to Airport), a private transfer about 1 hour 30 minutes.

Do the taxis run by meter?

By law they have to, but creativity cannot be ruled out.

I travel with an infant or smaller child, can I be sure the taxis have a child seat?

Some do but to be on the safe side it is better to pre-book a transfer and then inform you need a seat for a child.

Does any of the intercity buses stop by the airport?

Unfortunately not and except for the fact that the airport is a bit off track in relation to the roads used by the intercity buses, it is currently also not possible to get permission allowing them to stop at the airport.

Yes, except for the extreme cases. The last airport bus will not depart before all passengers have a chance to get on the bus.

If I plan to continue my travel from Zadar main bus station or the ferry terminal how much time buffer should I take into consideration?

To be on the safe side, plan 1 hour 30 minutes to get to the ferry terminal or the bus station.

Can I pay my transportation from the airport with Euros, Dollar or Sterling?

In general, the Croatian law states that the only currency allowed for payment of goods and services is the Kuna but exceptions apply and this is one of the cases. The airport bus and transfer / taxi drivers will in most cases accept Euros (Dollar and Sterling maybe?); any change will in most cases be paid in Kuna. Alternatively, there are several ATM machines and an exchange office when you exit the custom area at the airport, so getting local currency is not a problem.

Can I take Uber taxi from Zadar to the airport?

Yes, you can take Uber taxi from Zadar to Zadar Airport and it will cost you approximately 150 kn.