Arguably the most geographically and culturally diverse country in the world, Indonesia offers a wonderfully dramatic landscape that is sure to leave you in awe. The list continues from white-sand beaches and dense, vividly green forests to around 100 massive volcanoes that are capable of erupting at any time. It’s the world’s largest archipelago made up of more than 17,000 islands of which about 6,000 are inhabited. The diversity in culture, food, animals, plants and landscape makes it look like hundreds of countries melted beautifully into one.

Without further ado, here are 9 unspoiled UNESCO sites in Indonesia with a map at the end of the text you should definitely consider putting on your bucket list!

Nestled in central Java, the Borobudur Temple Compounds is a famous Buddhist temple dating back to the 8th and 9th centuries. Surrounded by lush green vegetation and towering volcanoes, the world’s largest Buddhist temple still draws pilgrims from all around Southeast Asia. The monument is decorated with around 2,600 fascinating low-relief panels and 72 circular stupas, each containing a statue of the Buddha. Sitting majestically on a remote hilltop, the temple allows visitors to follow the path of enlightenment as pilgrims did a thousand years ago. Nearby, you can browse traditional Indonesian souvenirs such as small display statues and traditional clothing. The easiest way to get here is by joining a tour or renting a car from Yogyakarta. 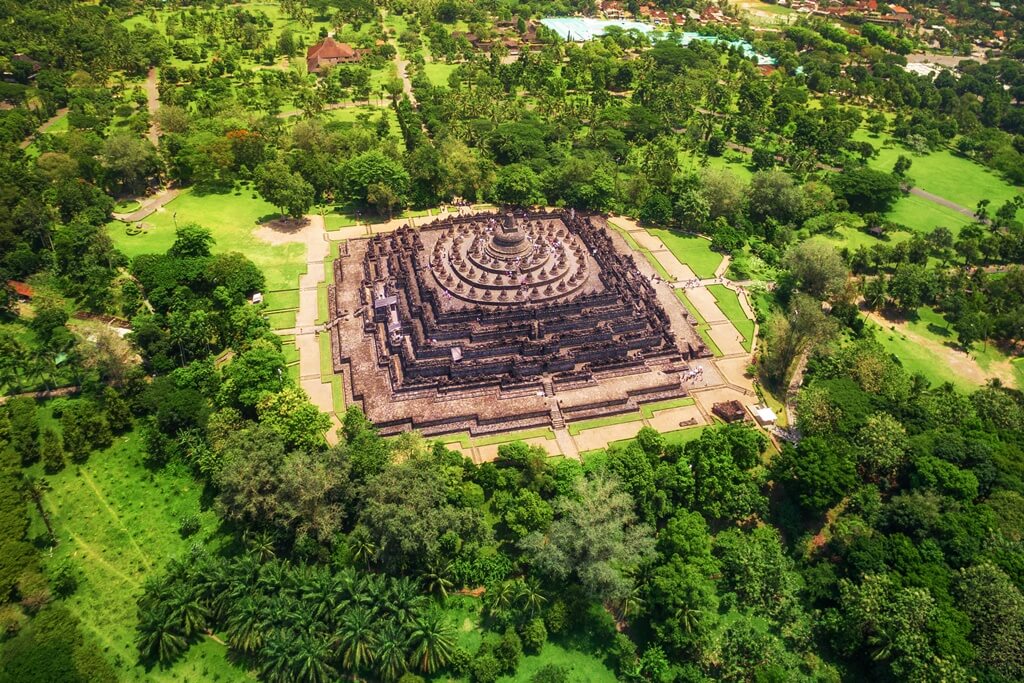 Encompassing five sets of rice terraces and associated water temples, the cultural landscape of Bali includes the 9th-century Subak System that reflects the philosophical concept of the Tri Hita Karana Philosophy. Born of the cultural exchange between Bali and India over the past 2,000 years, the temple’s concept brings together the realms of the spirit, the human world and nature. The temples are the main focus of the subak, also known as the water management system of canals and weirs. Closely linked to a thousand-year-old farming method, the water temples host a celebration festival every 105 days. This period of time corresponds to the same length of time as the rice-growing season in Bali. 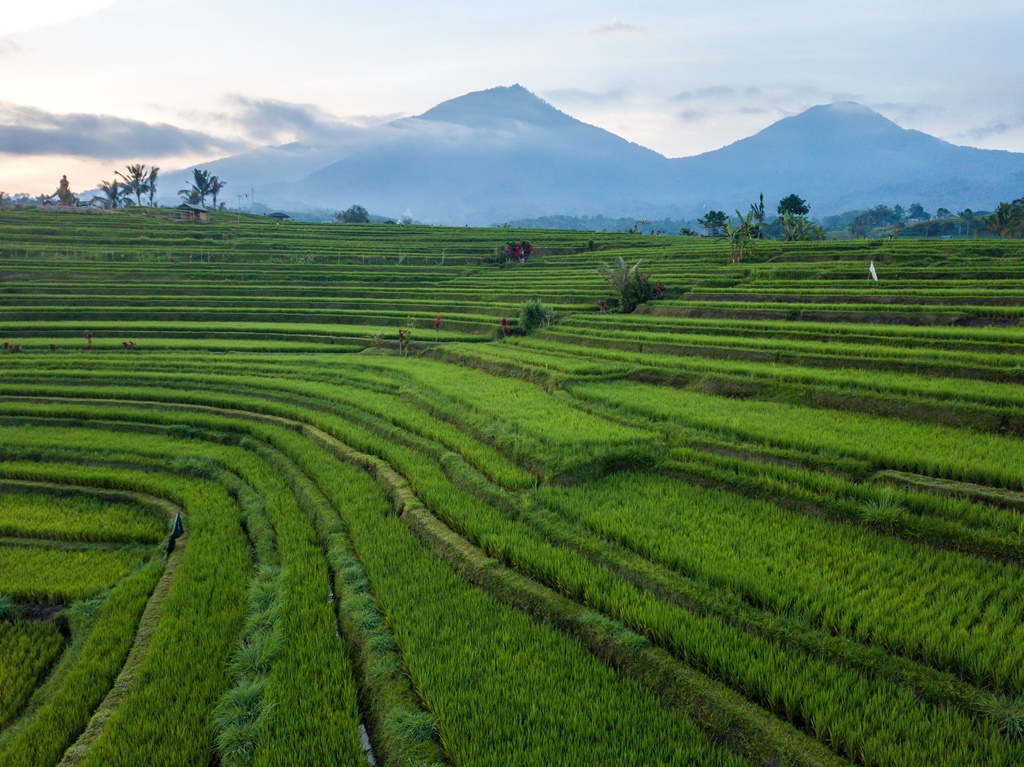 Developed by the Netherlands, the Ombilin Coal Mining Heritage of Sawahlunto comprises numerous mines, coal fields, tunnels, a Mining School and a railway system. Located in the distant mountains of West Sumatra, the site was built to exploit the exceedingly rich Ombilin coal deposits. During the late 19th century, the mines were developed in the globally important period of industrialisation. The nearby planned modern town had all the necessary facilities the workers needed to live a normal everyday life, like houses, health institutions, schools, churches and food service buildings. Scattered around the site, the three mining museums provide the perfect place to learn about the city’s forgotten history and its origins.

Representing an architectural and cultural treasure, the Prambanan Temple Compounds hosts over 500 temples in total. Moreover, it’s home to the largest Hindu temple in Indonesia and one of Asia’s biggest. Three main temples that dominate the area are dedicated to Shiva, Vishnu and Brahma, the creators of the world in Hindu mythology. Decorated with reliefs illustrating the epic poem of Ramayana, the temples are a must-see when in Indonesia. The temples are divided into three sections – the unholy area known as Bhurloka, the “middle world” for pilgrims and the Svarloka, the top of the temple which represents the realm of the gods. Behind these foreboding temples of ancient times lies a rich history filled with enrapturing legends, majestic architecture and more. 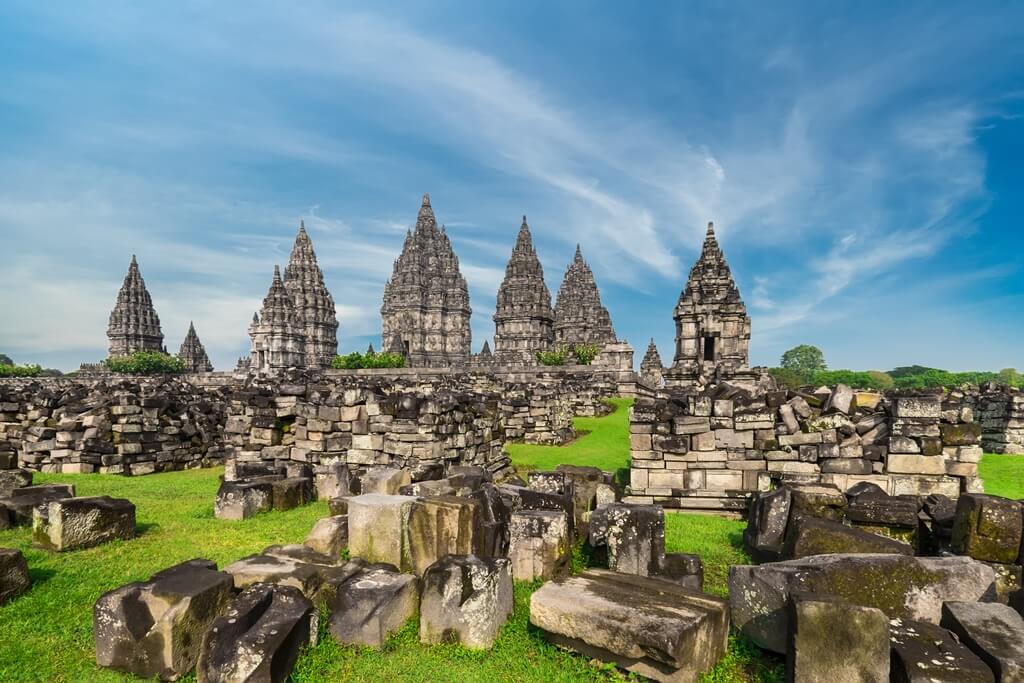 Half of all the world’s known hominid fossils have been discovered on the Sangiran Early Man Site, situated on the island of Java. As one of the key sites for studying the history of humans, this significant geological site holds evidence of human evolution within the last 2.4 million years. Another noteworthy site is the Sangiran Museum which displays prehistoric human, animal and plant fossils. Covering an area of over 5,600 hectares, there have been numerous discoveries of stone tools and a fossilised skull cap with teeth that are more than half a million years old. All of these important discoveries were deposited in the prominent local museum. It represents the ideal place to learn and reveal the mystery of the Javanese and their environment in the past. 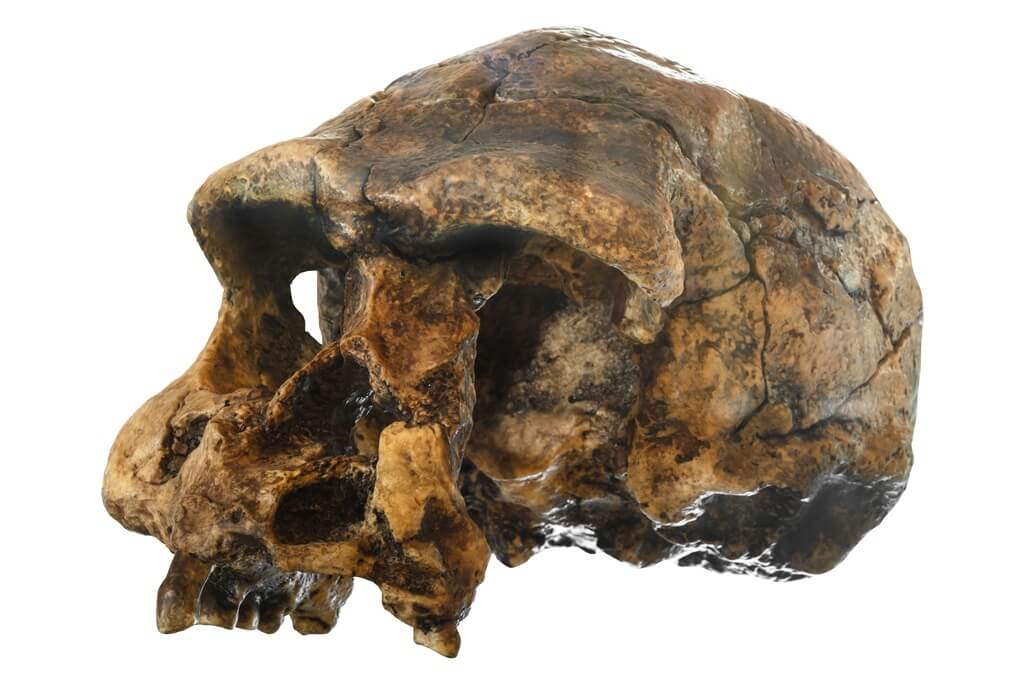 Home to the world’s biggest lizard, Komodo National park is situated in the heart of the Indonesian archipelago. Initially, the primary purpose of the park was to conserve the unique Komodo dragon, but now it also protects the vibrant coral reefs. They host a great diversity of species, such as sea turtles, whales, dolphins and dugongs. Dozens of volcanic islands within the park are filled with white and pink sand beaches for diving, as well as towering mountains ideal for trekking or hiking. With its incredible marine biodiversity, this site is on the bucket list for many divers, wildlife photographers and marine scientists. Green hills, turquoise crystal-clear waters with mesmerising bays, beaches and inlets truly add to the stunning natural beauty of this landscape.

Stretching over 150 km, Lorentz National Park is the largest protected area in South-East Asia. As one of the most ecologically diverse national parks in the world, the park incorporates everything from snow-capped mountains and glaciers to tropical seas. The mountain and its glacially sculpted peaks were the results of the collision of two continental plates. This site contains the highest island peak in the world and the tallest mountain between the Himalayas and the Andes. Around 8 tribes can be found in the lowland rivers and swamps, where they have developed complex and distinctive cultures and still lead semi-nomadic lives. Since the park contains many unmapped and unexplored areas, it is unquestionable that there are many plant and animal species yet unknown to the world. 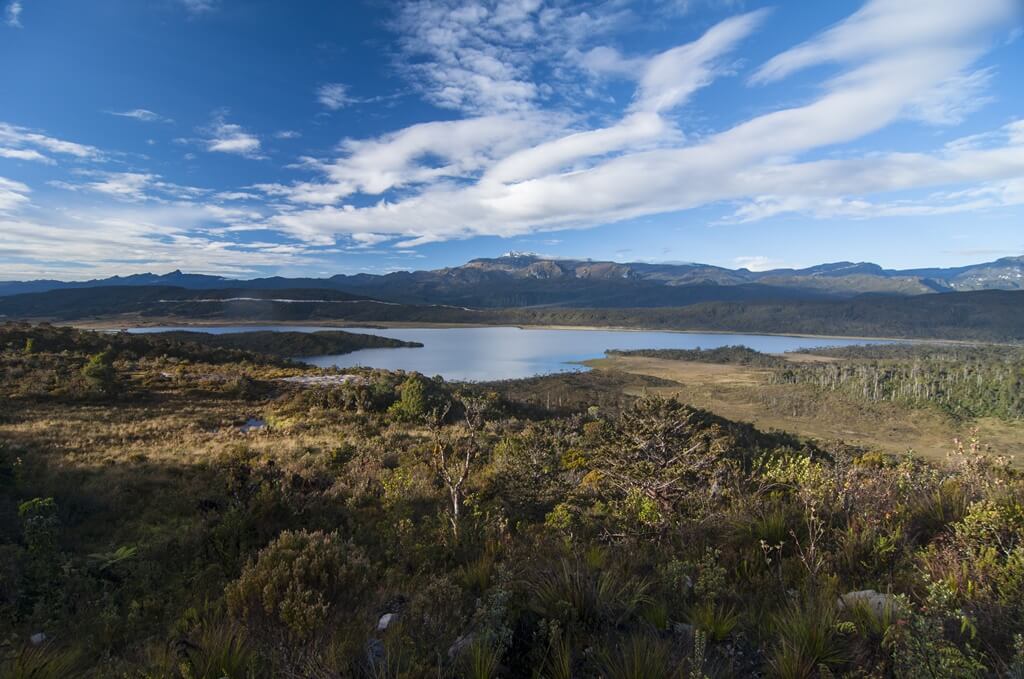 Harbouring many endangered species, the tropical rainforest heritage of Sumatra is made up of three stunning national parks. That includes Gunung Leuser National Park, Kerinci Seblat National Park and Bukit Barisan Selatan National Park. This 2.5 million-hectare mountainous landscape holds numerous volcanic, coastal and glacial lakes in natural forested settings, as well as simmering waterfalls and cave systems. The wild forests of Sumatra hide some of the world’s rarest animals and plant species, which emphasise the outstanding beauty of this vast rainforest. Under the magnificent Mount Kerinci volcano, you might find the world’s largest flower and tallest flower, together with the endemic Sumatran orang-utan, Sumatran tiger and Sumatran rhino. 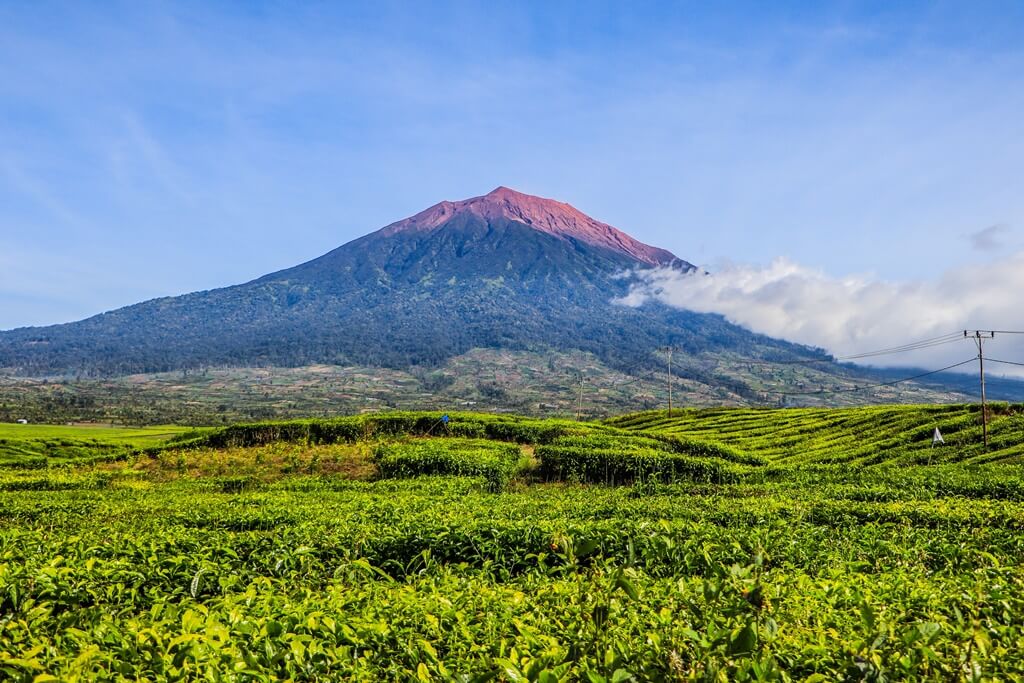 Located about 300 km from the capital city of Jakarta, the Ujung Kulon National Park includes the natural reserve of Krakatoa, the Ujung Kulon peninsula and several offshore islands. Covered with lowland rainforest, swamps, mangroves and grasslands, this vast area is Indonesia’s first national park. In addition, the numerous flora and fauna ideally adorn the home of several endangered animals, such as the Java one-horned rhinoceros and Forest Hound. Its natural beauty can easily be explored by purchasing a tour from a resort in Anyer or at the entrance to the park. Introduce yourself to the wilderness and get to know numerous exotic creatures like wild cats, leopards, panthers and sloths. However, don’t worry! The organised trip is completely safe, so it makes for the ideal getaway for you and your loved ones. 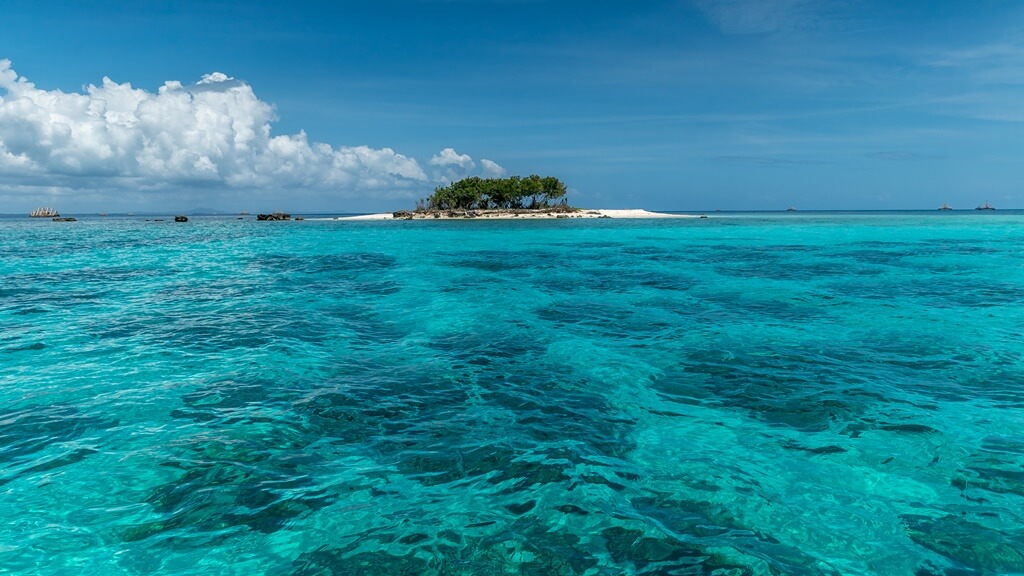 Map of UNESCO sites in Indonesia