In a search for a new ride through the world of fantasy, many of us instantly fell for The Witcher. Based on the books by Polish author Andrzej Sapkowski, the new Netflix series is full of mutants, elves, witches and other Tolkienesque features. But the legend of Geralt of Rivia is not new, as many discovered it through the successful video game developed years ago.

And while we all impatiently await the second season to begin, how about a tour of the filming locations that embodied this medieval world? Find inspiration and start planning your new journey!

Since the birthplace of the story is Poland, no wonder directors used it as a filming set. More precisely, Ogrodzieniec Castle depicted a location for the Battle of Sodden, shown in the season finale. The castle is located in Rabsztyn, a small village about 60 km from Krakow. The castle was originally built between the 14th and 15th century on the Castle Mountain in the Polish Jurassic Highland. Of course, what is a medieval castle without a legend? The legend has it that the castle is haunted by the “Black Dog of Ogrodzieniec”. The apparition is actually a ghost of Stanisław Warszycki, the Castellan of Krakow. The castle ruins are open for visitors.

The directors used the capital city of Hungary as a primary location for all the interiors in the series. That is also where the main filming studio was located. The most recognizable landmark in the series is Vajdahunyad Castle. It is the replica of the castle in Transylvania, located in the City Park of Budapest. The directors used a castle as a wizard Stregobor’s courtyard of the house. The castle is unique as it combines several different architectural styles. It appears as Gothic structure from one side and as a Renaissance one from the other. However, Vajdahunyad Castle is a ‘must-see’ if visiting Budapest as it is located near the city centre. Soak up the atmosphere and recall the tales of Dracula. Several other sights in Budapest and nearby areas were used including Kiscelli Museum, Szentendre Skanzen Village Museum, Replica Castle of Eger, Tata Castle and the forest of Gyarmatpuszta. 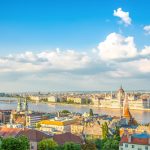 One of the main filming locations was also the Canary Islands where the directors used various landscapes. The main site Aretuza, the magic academy is also located here. Sadly, the fortress itself doesn’t actually exist in the real world, but only as a CGI. The main location was La Palma where the crew filmed most of the scenes. Among the sites used are Los Tilos waterfall, peaks of the Roque de Los Muchachos and cultural park La Zarza. Other scenes were taken on Gran Canaria and La Gomera. The Canary Islands was already on the big screen in Moby Dick, Operation Ganymed, The Haunting and many more.

The scene in which Geralt of Rivia fights Striga was taken in Kreuzenstein Castle located in Leobendorf, about 25 km north of Vienna. Certain parts of the castle still date back to the 12th century, but it was actually rebuilt in the 19th century. There are several tours per day that will introduce you with the weapon collection. In case you get hungry, Burgtaverne Kreuzenstein offers dishes with recipes dating back to the Middle Ages that will contribute to the overall medieval atmosphere. Visiting Kreuzenstein Castle can be an ideal option for a day trip from Vienna.