The Lord of the Rings: The Rings of Power Filming Locations

Following one of the most successful franchises of all time, The Lord of the Rings: The Rings of Power is set thousands of years before the events of The Hobbit and The Lord of the Rings. The Second Age of Middle-earth covers all major events. This includes the forging of The Rings of Power which led to the rise of the sinister Dark Lord Sauron. The show also depicts the rise and fall of kingdoms and the forming of new-found alliances, because only if they unite can they stand a chance to defeat the ultimate evil that wishes to conquer them all.

Across five upcoming seasons, The Rings of Power will set an epic backdrop to the history of events that shaped Middle-earth as we know it today. Discover all known filming locations of this long-awaited series in this guide.

In keeping with tradition, the first eight-episode season was filmed entirely in New Zealand from February 2020 to August 2021. Due to the COVID-19 pandemic, the production break lasted several months during the filming. This long-awaited prequel was primarily filmed in the Auckland region. It is scheduled to premiere for the first time on September 2, 2022. For further details, you can find the list of The Lord of the Rings: The Rings of Power Filming Locations from Season 1 right below.

Better known as the Islands of the North Wind, Hauraki Gulf is nestled on the coast of the North Island. It covers an area of 4000 km² where more than 50 islands are scattered all over the place. Most of them are uninhabited, though several of them are located within the Hauraki Gulf Marine Park. It is also known as New Zealand’s largest marine reserve. Its pristine beaches paired with beautiful native hill landscape offer the perfect spot for water sports, vineyards tours, boat cruises and other outdoor activities.

An 85 km-long natural barrier that shields the Hauraki Gulf from the Pacific Ocean is the Coromandel Peninsula. However, much of its attractions are hidden in the Coromandel Forest Park, a nature preserve in New Zealand. Inside this protected area lies an admirable range of mesmerising gorges, misty woodlands and dramatic rock formations. Dive into the Cathedral Cove, cycle the Hauraki Rail Trail or walk the Pinnacles. Each of these attractions provides a different perspective on the enchanting beauty of this location. So, explore as much as you can! 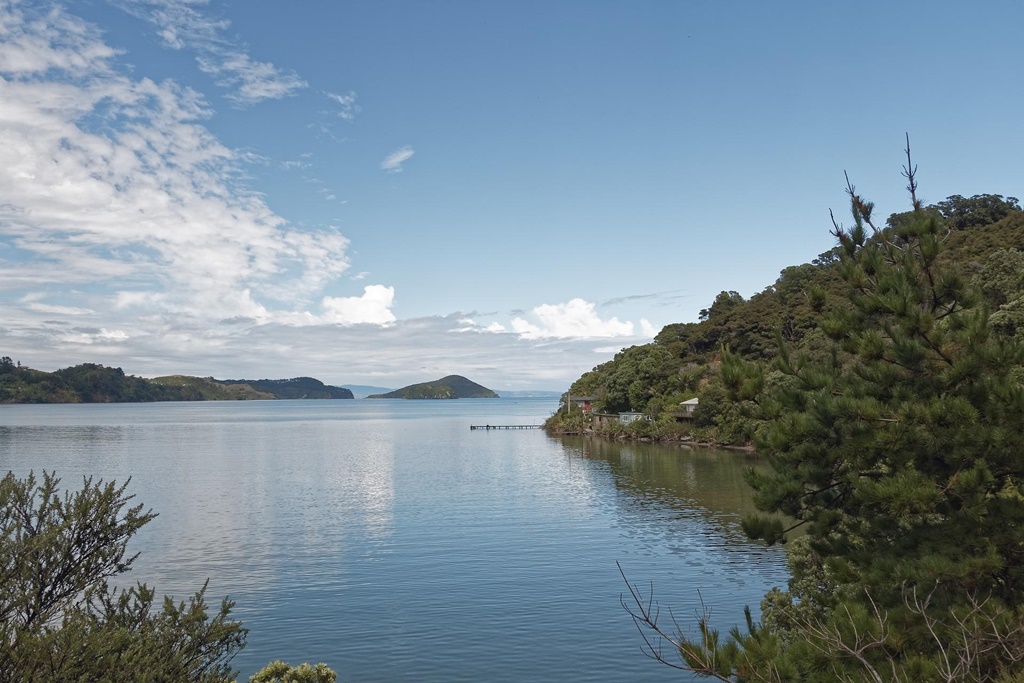 With an elevation of 1013 metres, Mt. Kidd is one of the remotest parts of Fiordland. One of the best ways to observe the ever-changing scenery of the towering alpine mountains and bright blue lakes is by going on a helicopter tour. That way, you’ll get to discover the little-seen parts of New Zealand’s South Island. The tour includes a high alpine landing at the stunning Mt. Kidd, nicknamed Mountain Magic. Therefore, this peak was deemed ideal to film some of the background scenery in the upcoming season.

Located at the edge of the Fiordland National Park, Manapouri is a small town on the banks of the tranquil Waiau Lake. According to an old Māori legend, the waters of Manapouri Lake are the tears of dying sisters, created by grief and sorrow. Today, this location is a prime spot for exploring the dense wilderness. These are Kepler Track, Moturau Hut, Rainbow Reach and Rakatu Wetlands, to name a few. In close proximity to this town lies Doubtful Sound. It is the deepest and the second longest fiord of the South Island, where waterfalls atop the mountain elegantly meet the Tasman Sea. 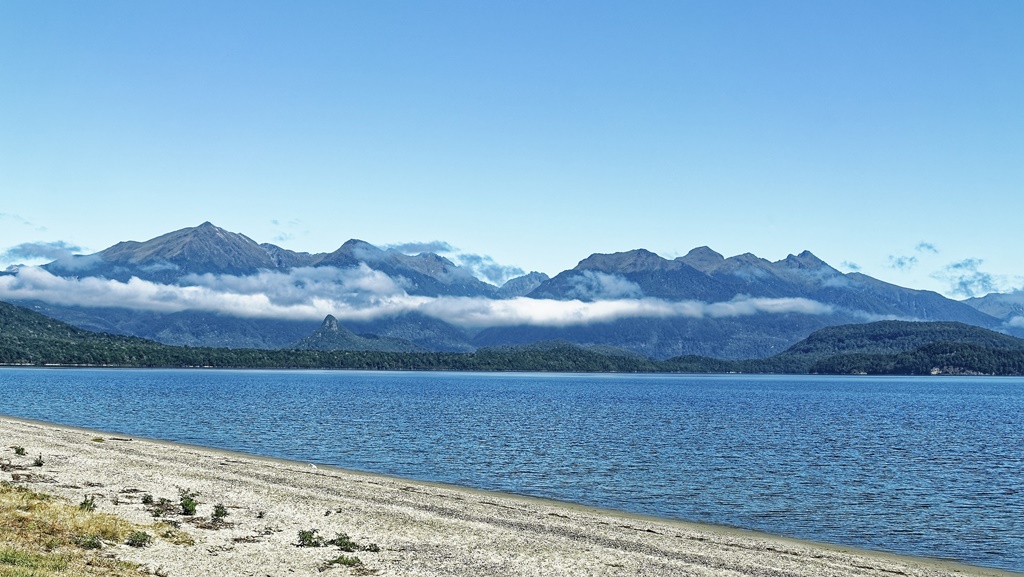 The towering limestone cliffs overlook a vast land of dense fields, a flourishing forest and a great number of massive rock formations, giving Denize Bluffs a commanding view of the nearby Piopio in the Waikato region. Also known as Hairy Feet Waitomo, this area was first used for numerous scenes in The Hobbit: An Unexpected Journey. Now it represents a new piece of Middle-earth paradise in The Rings of Power. While there, do stop by the famous Waitomo Caves, where glow worms follow the course of the entire underground river. Truly, a visit to this magical cavern seems like a trip to another world.

The scenic black-sand beach of Piha is the most popular surfing location on the fascinating coast of Auckland. Marked at each end by rugged cliffs, this dramatic and inspiring beach was the birthplace of Malibu board riding in New Zealand. During the 1930s, the first boat race was also held here. Nestled in the surrounding hills, you ought to take a look at one of the numerous walks through the native forest to get to see the location in its full splendour. The whole mountain range of Waitākere was formed by a 20 million-year-old volcano and the remains of a volcanic vent. The closest city is Auckland, which is only 40 km from the city. 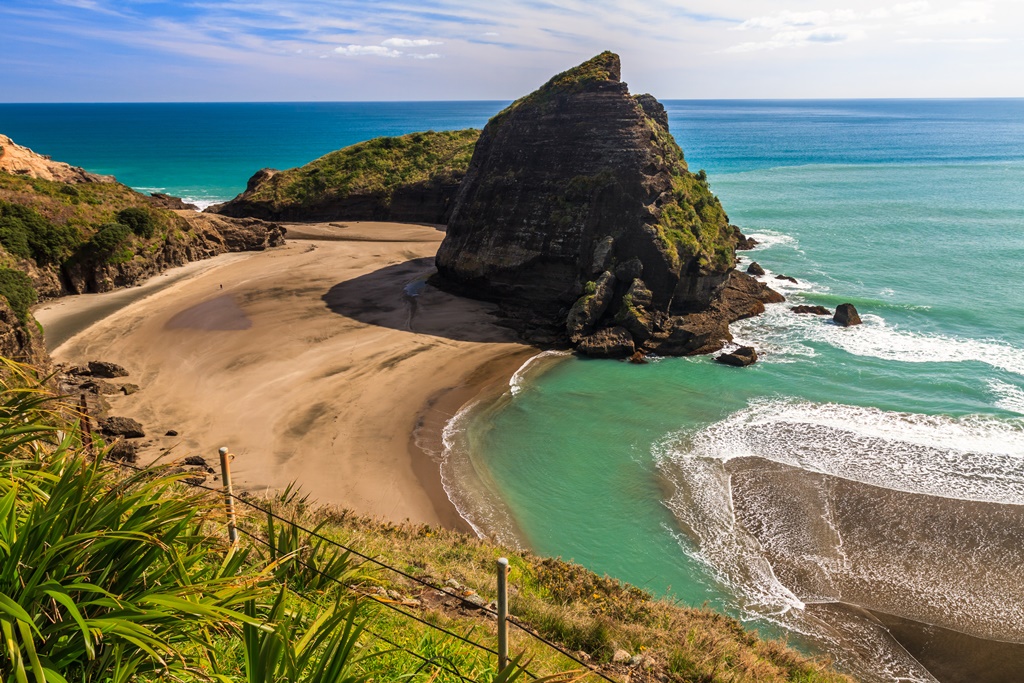 Below the rugged tree-filled ranges and deep river gorges lies Rangitīkei, the lush rurality of the Rangitīkei District. Also known as the land of adventure, art and scenery, this location offers many tourist attractions, with something to suit all ages, tastes and budgets. Visitors can easily enjoy rafting on the mighty Rangitīkei River, go bungee jumping or horse riding. On top of that, there are a great number of art galleries to peruse, as well as museums where you can learn more about the legacy of Māori history and colonial settlement.

Immediately recognised by its coal-black sand, Muriwai is an impressive coastline surrounded by sand dunes and majestic cliff-tops. That being said, it is an ideal place for swimming, scouting out the nearby glistening waterfalls and sand surfing on a bodyboard. Consider visiting the local Muriwai Gannet Colony and Vineyard Lunch Tour for tastings of local alcoholic beverages paired with delicious kiwi meals. Whether you’re into surfing, golfing or bird-watching, Muriwai is a site not to be missed when in Auckland!

The best-kept secret of the Auckland region is Anawhata, a peaceful beach filled with spectacular rock arches. Because it can only be reached by foot, this beach is significantly quieter than the other ones in the Waitākere Ranges. Consequently, Anawhata is ideal for people who wish to have privacy while doing numerous beach activities such as surfing, swimming and sunbathing. Travellers who enjoy hiking and birding should consider visiting Anawhata Beach Trail, a popular trail near the beach.

Since England’s landscape and the scenery were behind Tolkien’s inspiration, in August 2021 it was announced that future seasons will be produced in the United Kingdom, particularly in Scotland. Casting for the second season has already been finished, and filming is expected to begin by mid-2022. The official release date is still unknown, as are the final filming locations. However, there have been several reports about Amazon scouts visiting certain locations in order to find the perfect sites that will bring Tolkien’s true vision of Middle Earth to life.

So, without further ado, here is the list of The Lord of the Rings: The Rings of Power Filming Locations from Season 2.

The Old Man of Storr

One of Scotland’s most iconic places, The Old Man of Storr, is a 674 metres tall pinnacle of rock set above the rolling green hills and the sparkling coastline of the Isle of Skye. Its awe-inspiring scenery and views are a part of the Trotternish ridge, a massive peninsula that runs a little less than 30 kilometres. The name comes from the Norse word “Storr” which means “big”. Hence, it is believed that this location was once used as an important landmark by the famous Vikings. It’s situated near Portree, both the largest town and the capital of the Isle of Skye. 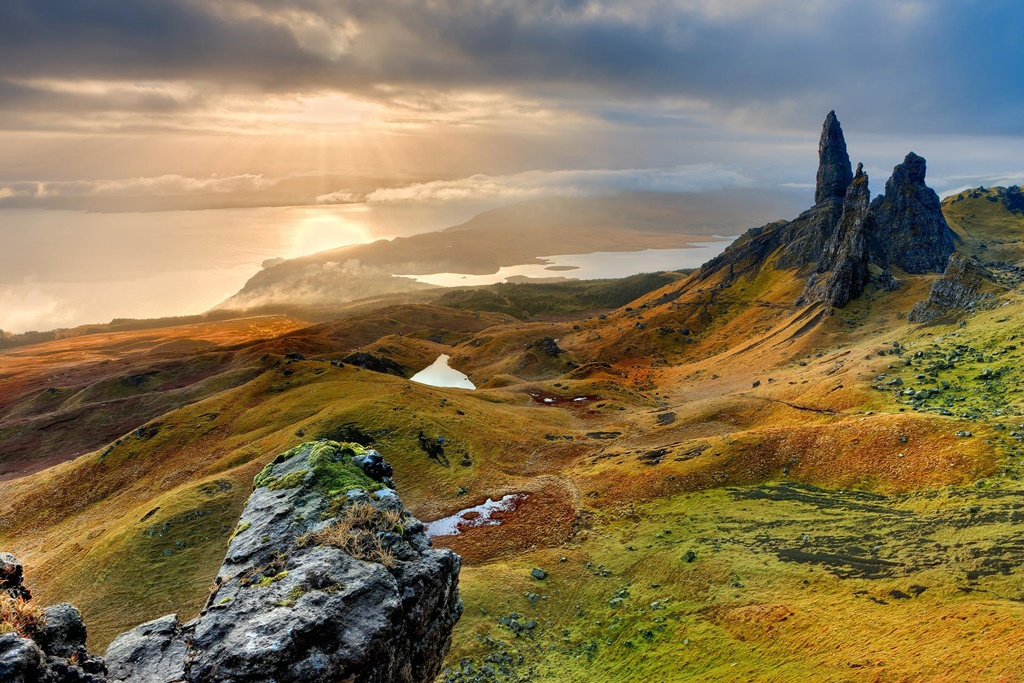 The Old Man of Storr

Overlooking the stunning Irish Sea, the ruins of Dunskey Castle are located at the edge of the headland. Held by steep cliffs rising from the sea, the area consists of vibrant green grassland, adorned with several shrubs and colourful flower beds. The nearest village is Portpatrick, an extraordinarily beautiful seaside town in the historic county of Wigtownshire, Scotland. The walk from there to the castle is only 15 minutes long!

On the northwest coast of Scotland lies Scourie, a welcome haven for locals and travellers included. Even though it is small in size, it has a lot to offer. It’s the home of the geological phenomenon in Rocky Bay, a place where you can admire metamorphic rocks. These rocks haven’t been modified since their formation over 2 billion years ago. Hidden beneath the elevated village, the dog-friendly Scourie Beach is instantly recognisable by its near white sand paired with a crystal clear sea, divided only by rocky inlets. On top of that, you can also get a boat trip to the nearby island of Handa. It is a nature reserve and the site of a large seabird colony.

A place of desolate rugged landscapes, flowing streams and untouched swamps, Rannoch Moor is the largest area of blanket bog in Britain. With the area being 82% bog, this untouched land is rich in plants, insects, birds and other animal life. Stretching around 130 km², the moorland is surrounded by towering mountains that rise over 914.4 metres and overlook Loch Rannoch. Dotted with innumerable lochans, rivers and rocky outcrops, get ready to witness how the mood of the Scottish landscape depends on the weather more than any other place on Earth. 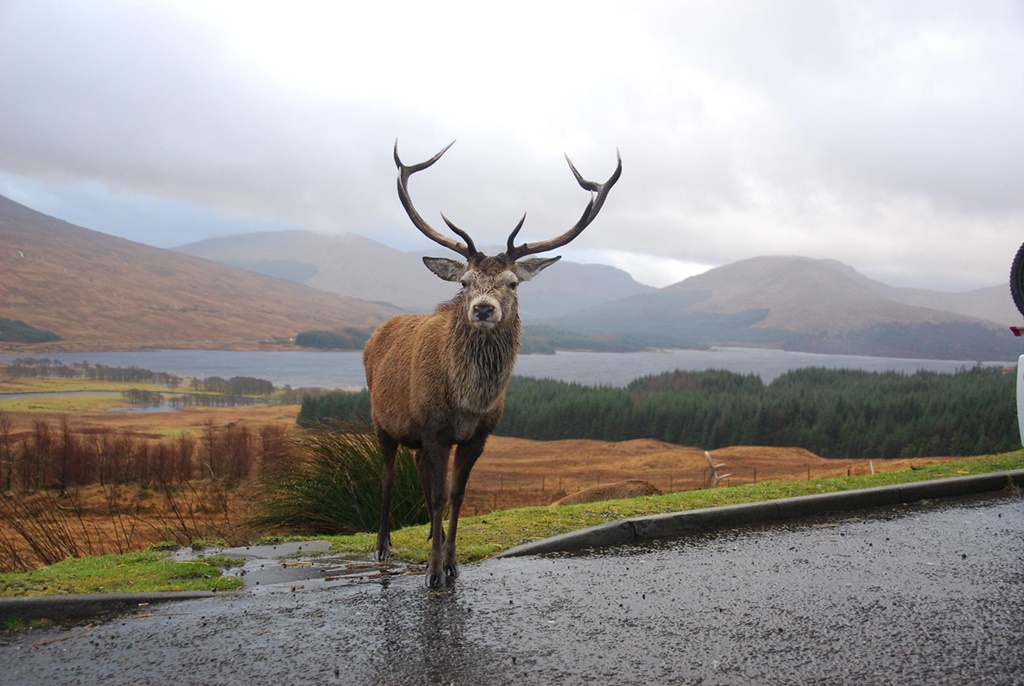 Situated at the junction of the two rivers, Garbh Uisge and Eas Gobhain, the small town of Callander lies in the Trossachs National Park. This makes it the heart of Scotland. As the first national park in Scotland and among the most beautiful national parks in the UK, it’s often known as the “Gateway to the Highlands”. The outstanding natural beauty of the Trossachs is filled with a dense forest, rolling hills, magnificent mountains and the cascading waterfalls of Bracklinn Falls. For panoramic views of Callander and beyond, visit the summit of Callander Crags.

Stretching over an area of around 0.8 km² or 200 acres, Balloch Castle & Country Park is the only country park in Loch Lomond and the Trossachs National Park. First recognised in 1980, the park commands impressive views over the Chinese Garden, Pleasure Grounds, Quarry Pond, Secret Gardens, Parklands and Woodlands. Furthermore, the newly redecorated park now includes a Fairy Trail were tree stumps were used to carve out wooden sculptures of dragons, tree spirits, fairies’ houses and more. The included walled gardens, nature trails and guided walks are the perfect activity for the whole family, as well as your four-legged best friends since the park is dog-friendly!

Known as one of Scotland’s national treasures, Dunnottar Castle is a ruined medieval castle that has been fortified in the Early Middle Ages.  Nestled upon a rocky headland, this castle has witnessed events that changed the course of history for more than 1000 years. On that account, this is the spot where William Wallace, one of the main leaders of the Scottish Independence Wars, laid siege, captured and burned down the castle’s wooden walls in the name of freedom. On the other side of the castle, you can get lovely views of the beach to the North. You might as well go hunting for a coloured pebble or two to bring a memorable souvenir back home! 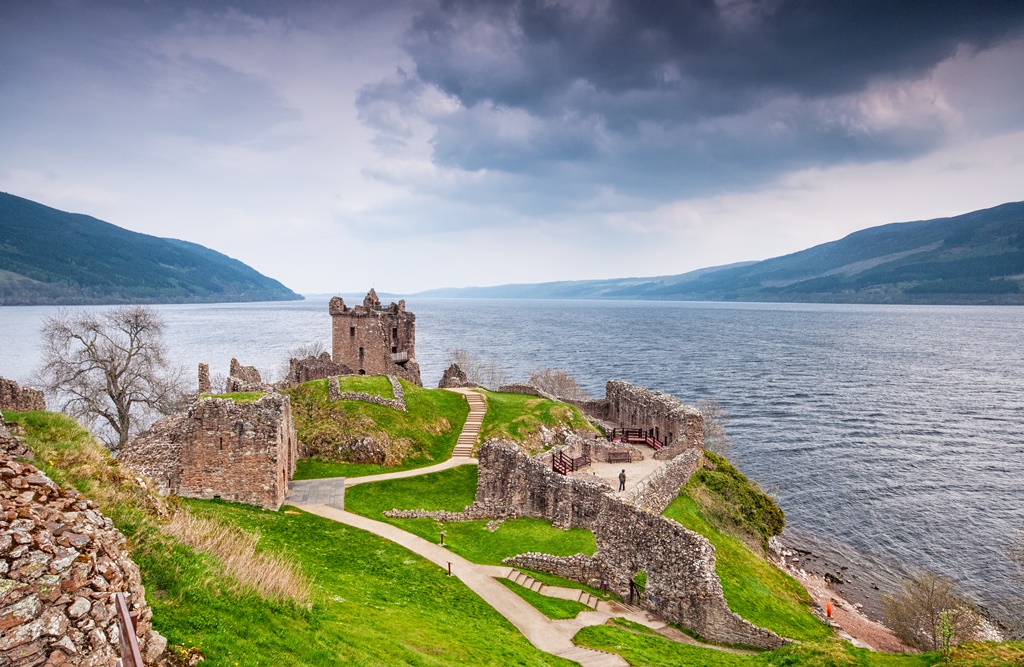 The Lord of the Rings: The Rings of Power Filming Locations Map