Croatia is a country small in size but large in number of UNESCO protected areas. There are in total 10 UNESCO World Heritage Sites, many of them being worldwide popular sites such as the Diocletian’s Palace in Split or City Walls of Dubrovnik. However, Croatia doesn’t lack important cultural and historical traditions as well. Get to know Croatia better through its list of 19 UNESCO Intangible Cultural Heritage items.

Dubrovnik carols or kolendavanje i a popular custom during the Christmas period. Kolendari or carolers ritually visit houses performing a congratulatory song carol on Christmas Eve. In return, hosts offer carolers with food, drinks, sweets and money, fruit and sweets. Dubrovnik carols are usually city carols with traditional motifs and typical carol text is often accompanied by a few humorous or satirical verses by well-known or unknown authors. Songs can be performed with or without instruments.

This tradition exists since 1272, as a type of congratulations to the prince and church dignitaries on Christmas Eve. The custom includes all residents of the City of all ages, especially children, ensuring the transmission and preservation of tradition.

The Konavle wedding toast is a well-known longer speech that is performed at Konavle weddings, drinking for health and well-being. The toast is performed by a toastmaster or zdravičar in front of the wedding guests, before the main meal at the wedding ceremony. By the middle of the 20th century, that person would have been one of the wedding guests or family members, but today a toastmaster has been invited specifically for the occasion.

Thanks to the toastmasters who are the active bearers of the tradition, this custom is still very alive in Konavle.

A dry stone wall is a unique stone construction that can be found in Mediterranean and central European rural areas. The uniqueness lies in the fact that the stones are stacked upon each other without using any other material as a binder. Croatia is one of the well-known countries when it comes to these stone structures, along with countries such as Greece, Italy, Spain and France. They especially defined the landscape of the Croatian islands.

Some of these structures date back to prehistoric times revealing the long preserved traditions. Their main role was to organize the living and working space, prevent the landslides, erosion and improve agriculture on their lands. Blending perfectly with nature, the dry stone wall is recognized for its incredible technique while locals nurture the tradition to this day. 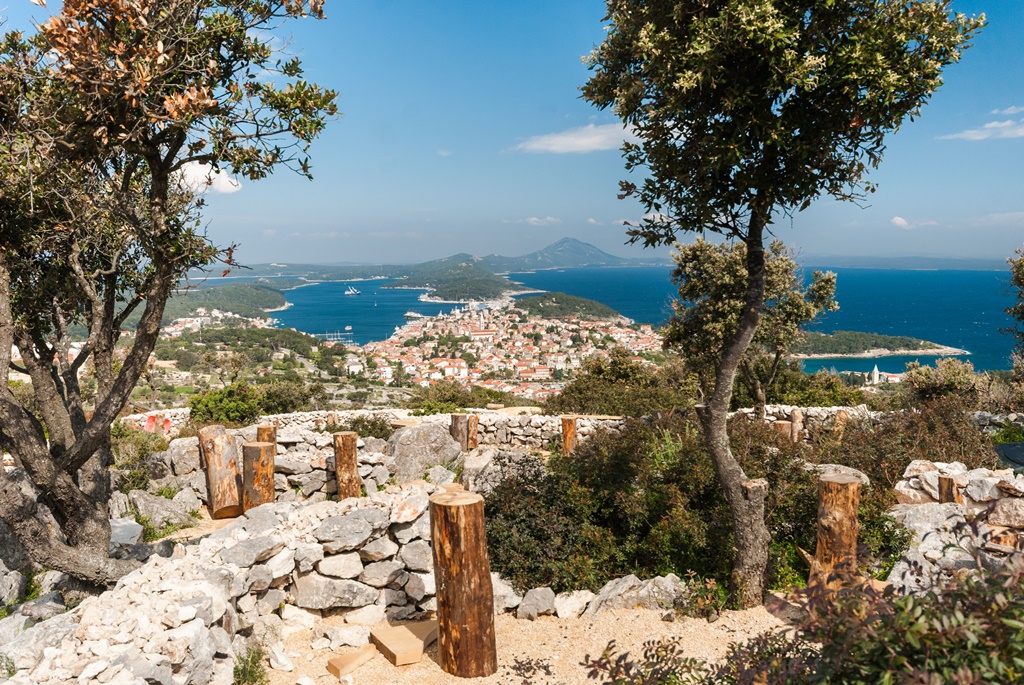 Međimurska popevka or a folk song from Međimurje is a traditional folk singing that originates from Northern Croatia. It can be performed by individuals or groups, men and women, often accompanied by dance. Still, a solo woman vocalist performance is predominant. Međimurska popevka takes place in social and community gatherings such as weddings or folk events.

With around 50 singers regarded as masters of the art and many women as mentors who transmit the tradition and knowledge to younger generations, Međimurska popevka is preserved in culture and time.

Batana Ecomuseum is a unique museum on the Adriatic coast dedicated to the wooden boat batana. It is a traditional fishing boat that is most widespread in Rovinj, Istria. The boat was traditionally made with lots of knowledge and skills of families over the centuries. Once, it was an important vessel in trade and today is a symbol of the town and maritime heritage.

Not only batana is an important cultural heritage of Istria, but also a strong bond of locals with Italian ethnicity.

The museum displays the boat and fishing equipment, shows how batana was built and nurtures the tradition through many activities such as regattas, workshops and festivals.

Croatia is a country that proudly consumes, practices and cherishes the Mediterranean cuisine. Croatian cuisine is a combination of many influences, but the coastal regions of Istria and Dalmatia are worldwide known for its Mediterranean diet. You will find a lot of fresh ingredients prepared with olive oil and herbs like rosemary and sage, garlic and tomatoes in almost every sauce. Fish and seafood are served along the coast and products such as wine, cheese and olive oil are recognized and exported all over the world.

Maybe the most important feature of the Mediterranean cuisine is togetherness. For people in the Mediterranean basin, food brings them together and serves as a tool for socializing and communicating. No wonder they call it one of the healthiest diets in the world! 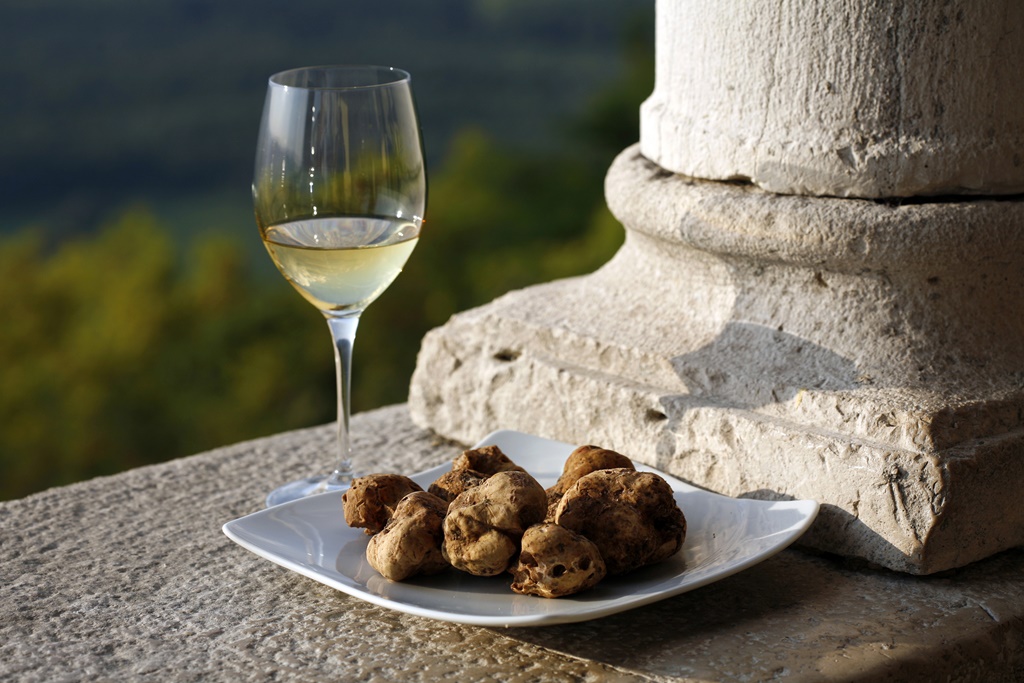 White truffles and wine from Istria

Croatia is also the proud home to the multipart acapella singing tradition called klapa. The origins of klapa are in Dalmatia and the name literally means “a group of friends”. Songs usually celebrate love, sea, homeland and its landscapes. Main features also include melody and harmony of the vocals. Klapa can be found in every town and settlement on the island, often singing on celebrations, events or just randomly for fun. Klapa festivals (Festival klapa) are also held every year when professional klapas from all over Croatia come to compete with each other.

The thing is, if you’re coming from Dalmatia, then it is very likely that you are in klapa or at least know someone close who is!

Becarac is a humorous form of folk singing that originates from Slavonia, Baranja and Srijem. The name comes from the Turkish bekâr which stands for a young man or bachelor. This type of singing where the lead vocal sings humorous lines, followed by a group of vocals, is often found on festivities and parties in villages across Northern Croatia.

Becarac is vivid and dynamic, often containing teasing or mocking verses. However, the main goal of it is to entertain the crowd and elevate the atmosphere.

Nijemo Kolo, a Silent Dance of the Dalmatian Hinterland

Nijemo Kolo, or literally Silent Dance, is a traditional circle dance that originates from the Dalmatian hinterland. Nijemo Kolo is performed by a group of people in a closed circle, men leading women and entirely without music. Vocals or instrumentals are possible before or after the dance. This traditional circle dance is often seen at carnivals, fairs and weddings as a part of the cultural identity.

Ojkanje singing is a traditional two-part singing that originates from the Dalmatian hinterland. Therefore, singing is performed by a minimum of two people who use a voice-shaking technique with each song lasting until singers lose their breath. The topic of ojkanje singing can be anything, from everyday life, politics, society to love and emotions. Also, these topics are often expressed in a humorous way.

Migrations from the rural to urban areas resulted in ojkanje singing being at the edge of distinction. However, a fistful of men is trying to pass the tradition to the new generations to protect the unique cultural heritage.

Licitar is the most famous gingerbread from Croatia that originates from the northern parts of Croatia and Slovenia. The unique craft made Licitars one of the most popular souvenirs one can take home from Croatia. Licitars are made of sweet honey dough and colorfully decorated with recognizable motifs, small mirrors or messages. They are usually made in the shape of a heart which is why they are especially famous as a gift for Valentine’s Day.

It is unknown how many Licitars have been actually eaten, but they can be probably found as a souvenir in every home across Croatia. 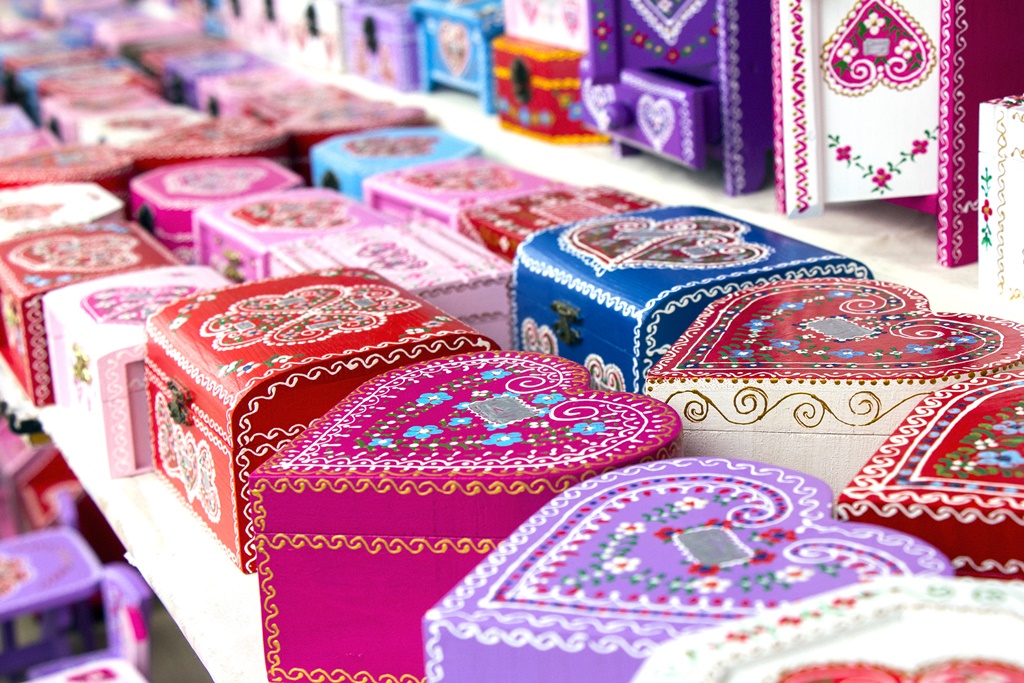 Sinjska alka is one of the most popular cultural events in Croatia and it commemorates the Croatian victory over Ottomans in 1715. The tournament is held in Sinj every first Sunday in August when knights ride horses at full gallop along the main street, aiming lances at an iron ring hanging on a rope. The name alka comes from the Turkish word for the ring. On that day, all participants are wearing authentic clothes and accessories from the 18th century and wear original weapons.

Sinjska alka is recognized as an important event for preservation of cultural and historical heritage.

Two-Part Singing and Playing in the Istrian Scale

Every part of Croatia developed their own styles of singing and playing music. Two-part singing and playing in the Istrian scale refers to a music scale of folk genres originating from the Istrian peninsula. The Istrian scale is unique for its six tones and singing is recognizable for its nasality. However, as other musical traditions in other parts of the country, this Istrian tradition is present in everyday life and festive occasions such as weddings or family gatherings.

The Festivity of St Blaise, the Patron of Dubrovnik

The traditional festivity of Saint Blaise, the patron of Dubrovnik, takes place every beginning of February and it is one of the most important festivities of Dubrovnik. The festival is a combination of folk costumes, songs and dances and a celebration of the patron with religious rituals. Along with prayers, white doves are released and the church bells ring in the whole city.

The tradition has slightly changed throughout the years, but its importance of preserving the aspects of human creativity remains the same.

Manufacturing of children’s wooden toys made in Hrvatsko Zagorje has a long tradition that has been passed down through the generations for many years. Toys are usually made of willow, lime, maple or beech wood in the shape of horses, whistles, birds, dancers, cars etc. These wooden toys can be often found on markets and fairs all over Croatia, often bought as a souvenir.

The traditional Procession of Queens originates from Gorjani in Slavonia includes young girls from the village divided into groups of kings and queens, wearing sabres or garlands. They go from house to house performing folk dances for the families. The whole village participates in the preparations and the celebration. However, the origins and the purpose of this celebration are relatively unknown.

Procession Za Krizen literally means “following the cross” is the night procession that takes place every Maundy Thursday on Hvar island. Each of the six Hvar villages sends a group that will walk for 25 km in 8 hours circling from village to village. At the top of the procession is the cross-bearer with friends carrying candles and a choir singing. Finally, the whole group ends up in their own starting point villages and parish churches.

Zvončari or the “bell ringers” are a characteristic folk costume from Rijeka that traditionally marches through the villages during the Carnival period. Their costume is actually a sheepskin with bells around the waist. Their main role is to scare away evil spirits of winter and welcome spring. This noisy tradition is centuries old and an inevitable part of Rijeka Carnival.

Lacemaking or čipkarstvo was the first item of Croatian intangible heritage inscribed in 2009. The tradition is known since the Renaissance and the Croatian lace originated from several centres along the Adriatic coast – islands of Pag and Hvar along with Lepoglava and Sveta Marija in the north. The unique designs and patterns of Croatian lace are widely recognizable and the most popular one is Pag lace. 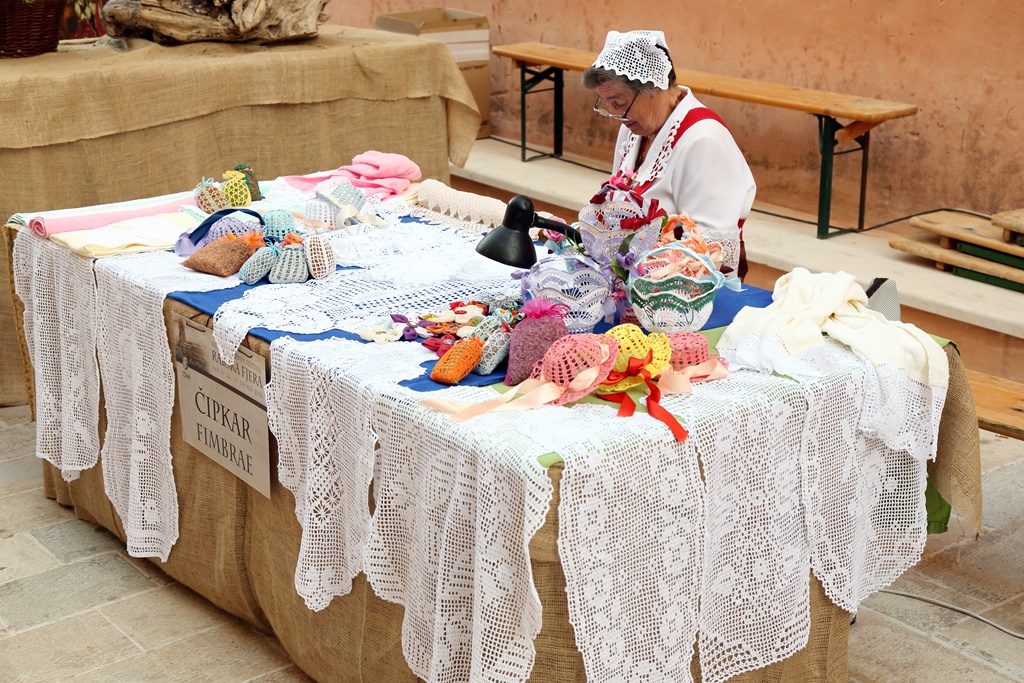