Argentina has a coastline that stretches around 4700 kilometres down the Atlantic. As such, it is no surprise that there are many beautiful beaches in Argentina. Wide and sandy, they attract millions of visitors who enjoy beach activities, surfing and stunning sunsets. Interestingly, some of the best and most famous beaches are on the coast of Buenos Aires province. Without further ado, below is the list of the best beaches in Argentina.

Mar del Plata is one of the best beach resorts in Buenos Aires province and in all of Argentina. The beach resort city is less than five hours away from Argentina’s capital. It is also less than two hours away from Necochea beach resort. It is a popular tourist destination during the southern hemisphere summer. Furthermore, visitors can enjoy surfing, windsurfing, or they can unwind in one of the many beach bars. Also, the only legal nudist beach in the country, Playa Escondida, is around 45 minutes away from the resort. 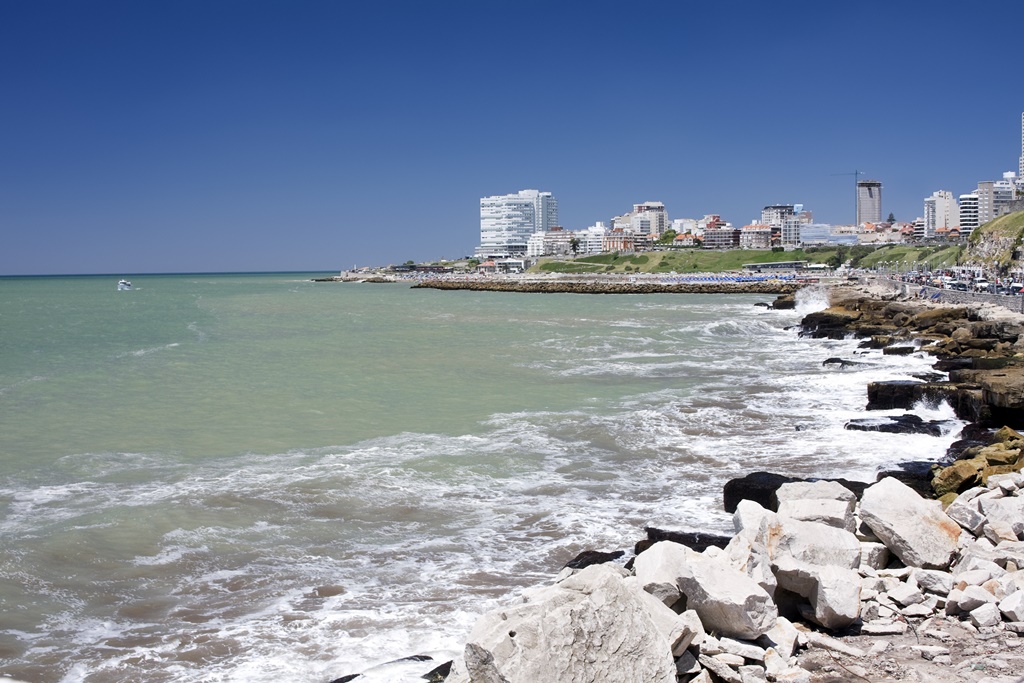 Another stunning beach resort on the Buenos Aires coast is Cariló. Perhaps the main attractions are the sand dunes. Particularly, the sand dunes are the centre of many activities offered in Cariló, namely renting quads and dune bashing. As the resort is mainly tourist-oriented, there are many luxury resorts, hotels, beach houses and apartments. Thus, visitors can choose the accommodation that suits their preferences and their budgets.

The best way to get to Cariló from Buenos Aires is by taking a bus to nearby Villa Gesell and then hiring a taxi to get to your destination.

This large seaside resort is undoubtedly one of the visitor-favourites. The total length of Villa Gesell beach is around 11 kilometres. Unsurprisingly, the beach is covered in soft sand and the waves of the Atlantic Ocean attract surfers.  Furthermore, some sections of the beach are ideal for driving a quad. Also, there are many food venues and bars, as well as some spas. Many visitors come here year after year to enjoy the beauty of Villa Gesell beach. 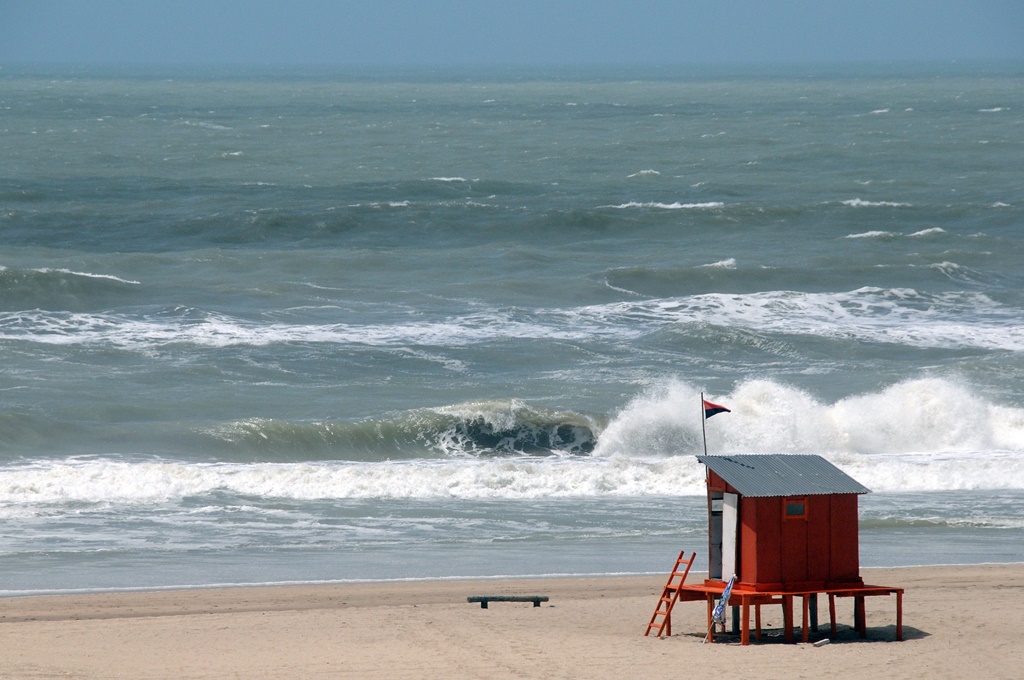 Pinamar owes its name to the artificially made forest of pine trees in the area. What was once a scenery composed of sand dunes is nowadays an urban city resort where high Atlantic ways brush against the sandy beaches. Because Pinamar is a tourist-oriented city, there are many services along the beach. Namely, they mostly include restaurants and coffee shops. However, there is also a children’s playground. Furthermore, due to its tall waves, Pinamar is a popular surfing destination.

In order to get to Pinamar, visitors can take a bus from Buenos Aires. If coming from Carilo, a taxi is the best option as the two are less than half an hour away.

Las Grutas is a beautiful beach in Argenina. Situated in the northern part of Patagonia, in the province of Rio Negro, the beach welcomes hundreds of thousands of visitors annually. However, its landscape is quite peculiar. The soft sand beach is separated from the city of Las Grutas by tall cliffs stretching above the sand and the ocean. Hence, accessing the Las Grutas beach is an adventure of its own.

If going to Las Grutas, the best option is to fly from Buenos Aires to Viedma. Once there, the best way to reach Las Grutas is by taking a bus.

Monte Hermoso is another beloved seaside resort town, albeit a bit different from others. Particularly, it is a town that has a tad colder summers due to its position. However, the ocean is warm during summer and many people enjoy spending their vacation by the sea without the overwhelming heat. Furthermore, the soft sand on the beach against the blue ocean waves ensures some of the most magnificent sunsets. Undoubtedly the most famous landmark is the tallest lighthouse in South America. 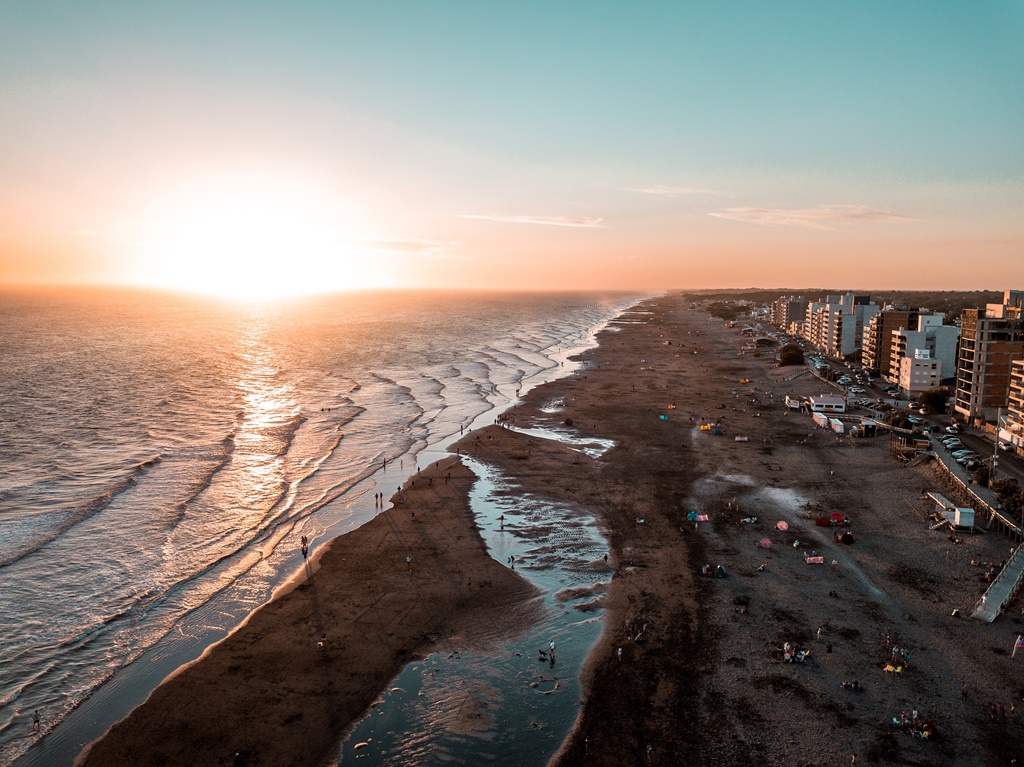 The several kilometres long, wide beaches of Mar de Ajó are reasonably considered some of the most beautiful in Argentina. Because of the sand that covers the entirety of its surface, as well as strong winds that rise in the afternoon, the beaches are attractions that enable different types of relaxation and recreation. While the ocean is calm in the morning and ideal for spending some peaceful time, in the afternoon its waves attract many surfers. Furthermore, it is a great destination for beach volleyball. Interestingly, Mar de Ajo is located close to San Bernardo del Tuyú, famous for its San Bernardo beach.

Mar de las Pampas beach is the most famous beach in a small resort town of the same name. The wide sandy beach is surrounded by stunning sand dunes. However, those dunes are also a reason why it might prove a bit difficult to reach Mar de las Pampas. Nevertheless, the beach is deservedly considered one of the most beautiful in Argentina. Those who wish to hide from the sun and sand after a good swim, surf or sunbathing, can unwind in the nearby bar. Also, those with an urge to do some shopping will enjoy the clothes and souvenir shops.

The easiest way to get from Buenos Aires to Mar de las Pampas is to take a bus.

Bristol beach in Mar del Plata is one of the visitor favourites in the city. It offers everything one can wish for – shops, food vendors and beach bars. Also, the beach is popular for its sea lions that can often be seen. Because it is the most popular beach in town, it does get crowded during the summer season, especially in the afternoons. However, the virtue of Bristol beach is that it is also stunning in winter.

You can get to Bristol beach on foot if coming from Casino del Mar, or by taking a public transport.