The city of Lyon is situated in the southeast of France. Although it is the second biggest urban area in France, Lyon is much less talked about than Paris. However, this city has a lot to offer to its visitors, from UNESCO World Heritage sites and beautiful architecture to rich history and fun events. Food is an inevitable part about it, as the city has been called “The Gastronomical Capital of France”. So, check out our guide through beautiful Lyon.

How to get to Lyon

As an important and big European city, Lyon is well connected to multiple cities in Europe. There are more ways of getting to Lyon and here are the options explained.

Keep in mind that tolls apply on these routes.

You can reach Lyon by train or TGV from all over France. It takes approximately 2 hours from Paris, an hour and 45 minutes from Montpellier and an hour and 40 minutes from Marseille. The main train stations in Lyon are called Part Dieu and Perrache. To reach the centre from Part Dieu, it will take you approximately 20 minutes. Take metro line B from the V. Merle station, but only 2 stops and then take line D to get to Bellecour, considered one of the city centres. If you are arriving in Perrache, to reach Bellecour, you can take metro line A and exit after 2 stops, which will be an only 2 minute ride.

You can reach Lyon landing in Lyon’s Saint-Exupery Airport. It is situated 25 kilometres from the city centre of Lyon, which you can easily reach by tram or by taxi. The tram ride lasts about 30 minutes. 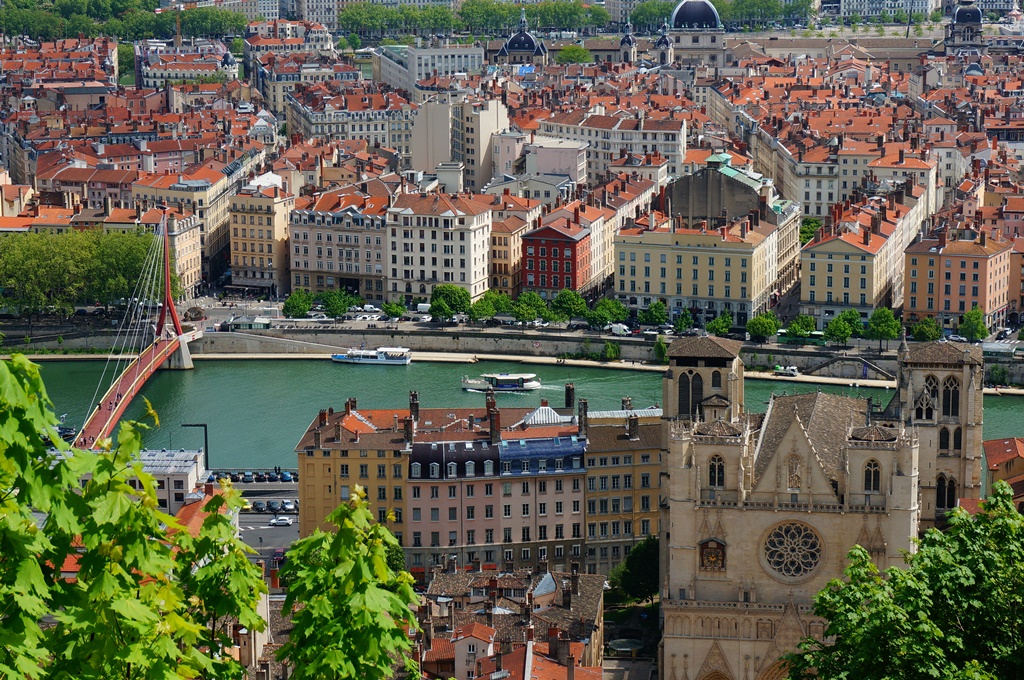 The view of Lyon

What to see and do in Lyon

The Lyonnaise are known for their relaxed style of living, while Lyon is known for remarkable sights, both history and appearance-wise. So, take your time strolling their magnificent squares and visiting the places we’ve chosen for you. Here are the most important sights and activities in Lyon.

The 19th century Basilica of Notre-Dame de Fourvière is one of the hallmarks of Lyon. The neo-Byzantine basilica, which is also a UNESCO World Heritage site, sits atop the highest hill in Lyon, Fourvière, that you can reach by taking the funicular. Once you reach the top, there is an esplanade from which you can catch a panoramic view of the whole city. 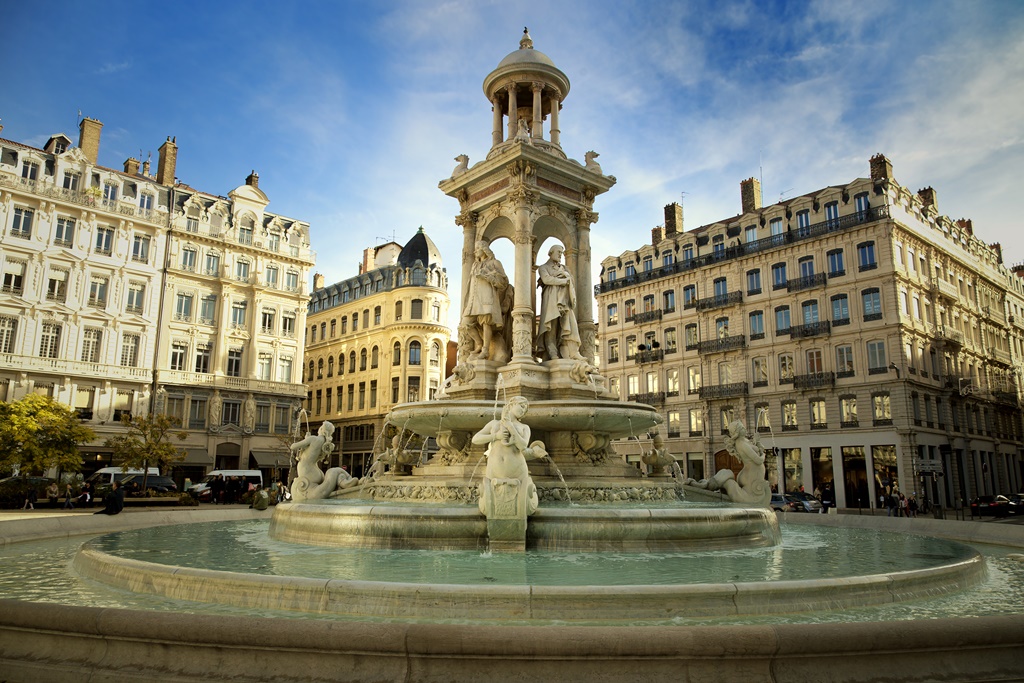 Croix-Rousse is a neighbourhood situated on the slope of a hill. This 19th century area is known for the Lyonnaise tradition of producing silk. Therefore, you can visit the silk museum – Maison des Canuts which preserves the tradition of silk making.

When in the Croix-Rousse neighbourhood, you should pay a visit to mysterious passageways called traboules. They were used by silk traders to protect the silk and today allow tourists to explore courtyards and staircases. Each has a lion to mark the entrance and you can freely explore it during the day.

Vieux Lyon or Old Lyon is one of the largest Renaissance neighbourhoods in Europe. Before moving to Croix-Rousse, silk merchants worked here, so, while strolling the streets of this UNESCO protected neighbourhood, explore some of the oldest traboules.

Presqu’ile district is something you should definitely not miss. The UNESCO World Heritage site area embraces what makes Lyon so special – its monumental squares.

Place Bellecour square is situated in the heart of the city. It is a particularly nice sight when the statue of Louis XIV gets illuminated by the lights from the surrounding 19th century buildings.

Place des Terraux square holds the city hall Hotel de Ville which used to be a centre of the Nazi Resistence. The square is overlooked by The Museum of Fine Arts, one of the most important museums in France that got some of its works from the magnificent  Louvre. Some of the artists whose works you can see there include Rembrandt, Gauguin and Delacroix. Besides that, you can discover oriental and Greek art. The museum offers a coffee and dining place called Terrasse Saint-Pierre.

Lyon is considered the birthplace of cinema as it is the place of the first film ever shot. What’s more, you can visit the exact place where the scene from the first film, Employees leaving the Lumière factory was shot as well as learn more in detail about it in the Lumière Institute and Museum.

Les Halles de Lyon–Paul Bocuse, an indoor food market that dates back to 1859 and is named after a chef who received three Michelin stars for his restaurant – Paul Bocuse. 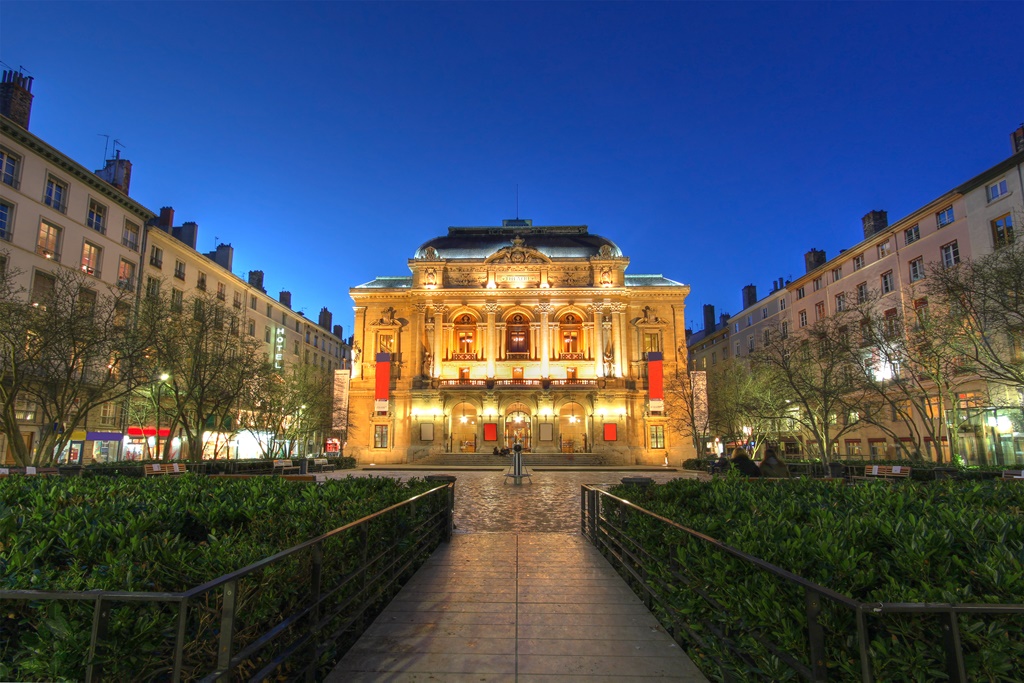 What to eat in Lyon

As you find yourself in the capital of French cuisine you need to try their local dishes. For a start, the best places to try them are their small, family-owned restaurants called bouchons. There, you will find traditional Lyonnaise dishes which often include meat, cheese and bread. While doing so, you shouldn’t miss out on French wines – Châteauneuf-du-Pape or Beaujolais. Some of the local dishes of Lyon include:

If looking for the best place to try these specialties, here are our suggestions.

Vieux Lyon or the older side of the town is packed with cozy bouchons which more or less all serve Lyonnaise classics. One of them is Daniel et Denise Croix-Rousse where you shouldn’t miss desserts like parfait and Cafe des Federations where you can eat famous quenelles de brochet as well as calf’s head. If you want fine dining, but avoid paying huge prices for it, you can try out Le Bœuf D’Argent. If you want to visit the famous restaurant Paul Bocuse, it is situated 15 minutes from Lyon and offers Michelin quality dining.