Lisbon is known as one of Europe’s cheapest capitals to visit. And one of those places every real traveler must visit at least once in a lifetime. Why? Well, it is a city of enormous heritage which collides with modernism and progressive development. If you choose Lisbon as your holiday destination, you’ll get to enjoy in rich history, vibrant nightlife and ideal climate. Hurry up and grab your ticket to see a city bursting with culture and fantastic places to eat, stay and party!

What to see: One of the most authentic Lisbon experiences is taking the tram 15E or tram 127 to the district of Belém (from the Figueira Square or Comercio Square to the stop after the Jerónimos monastery). Only the bakery Pasteis de Belém itself is enough to go there, however, the district has many other attractions, from one of the biggest plazas in Europe Jardim da Praça do Império to the Museu dos Coches which houses one of the world’s biggest collection of royal coaches and Jerónimos monastery of fantastic exterior design. On the inside you’ll come across two museums, the Museu de Marinha, dedicated to the golden age navigators and the Museu Nacional de Arqueologia, which contains Roman mosaics and bronze age metalwork. Art lovers will be thrilled to see the private art collection of masterpieces from the 20th century at the Museu Coleção Berardo inside Belém Cultural Centre. However, don’t forget to check out Torre de Belém standing tall on the wide waterfront. We don’t recommend visiting the district on Mondays as most of the sites are closed.

NOTE: The 15E tram takes 20 min to arrive from Praça da Figueira via Praça do Comércio to Belém (last stop Algés) and costs €2.90. 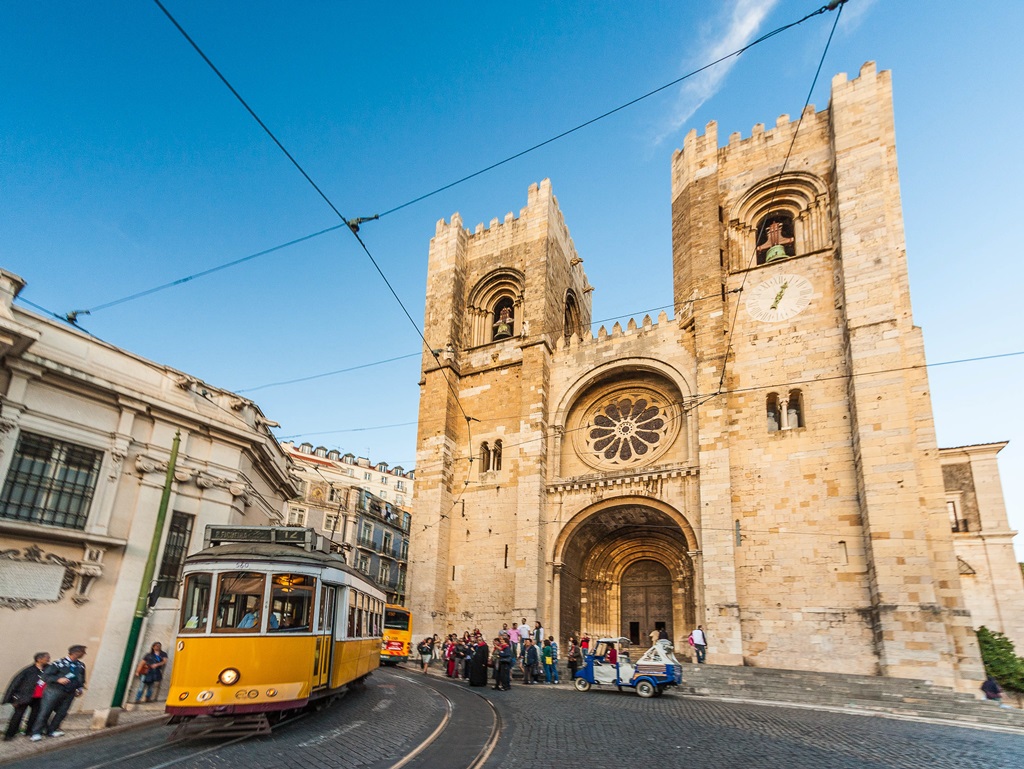 However, tram 28 is what Lisbon’s most preferred route. It takes you from Martim Moniz to Campo Ourique, and passes through the popular tourist areas of Graca, Alfama, Baixa and Estrela. It’s a must-have experience, so  you should do it on your first day there to get the sense of the city and to admire the charming, narrow streets of the city.

As we already said, Lisbon is a city of rich history, so there’s no wonder it is full of antique shops, most of which are situated on Rua de São Bento (Rato metro) and Rua de São José (Avenida metro). You might also like the Tuesday and Saturday Feira da Ladra market and the Sunday market which used to be an old factory warehouse, now populated with vintage shops, designer shoe boutiques and fancy restaurants. If you got enough time, check out the retro store A Vida Portuguesa, which sells long-forgotten, once loved, Portuguese products. It is a place to buy nicely packaged traditional stuff and you can choose among four stores, but the Chiado branch is by far the most popular one.

However, for anyone who wants to say he felt what it’s like in Portugal’s capital city, one place is a must. The Gulbenkian is a all-in-one stop where you can see Edgar Degas’ work, relics of ancient Egyptian culture, feed ducks, eat probably the best ice-cream in town, listen to jazz or simply lie on the grass and relax… it includes the Museu Calouste Gulbenkian where you can enjoy an eclectic and stellar art collection, indoor and outdoor auditoriums, a separate light and airy Centro de Arte Moderna with works of British and Portuguese artists (including Hockney and Rego), and languid landscaped gardens. Gardens are open 10:00 a.m. – 07:00 p.m. daily, and museums 10:00 a.m.-06:00 p.m. (except Tuesday).

Another super important part of Lisbon life is Tagus river. And while you’re there, we recommend you to try out surfing on the river. The beaches of Estoril and Cascais are easily accessible by train, while the Costa da Caparica is approachable by ferry and bus. If you’re up for this experience, then the best way to start is to rely on Lisbon Surf Tours team which will collect you from the hotel, provide you with equipment and useful advice and take you to the breaking waves according to the weather and your level of surf experience.

Last, but not least, you should definitely add Aqueduto das Águas Livres and Igreja de São Vicente de Fora to your list. Lisbon’s aqueduct, who survived the 1755 earthquake without any damage, spans the Alcântara valley. So, the Águas Livres Aqueduct is not only a remarkable work of engineering but also an interesting attraction, perfect for a quiet walk that offers panoramic and different views over the city of Lisbon. 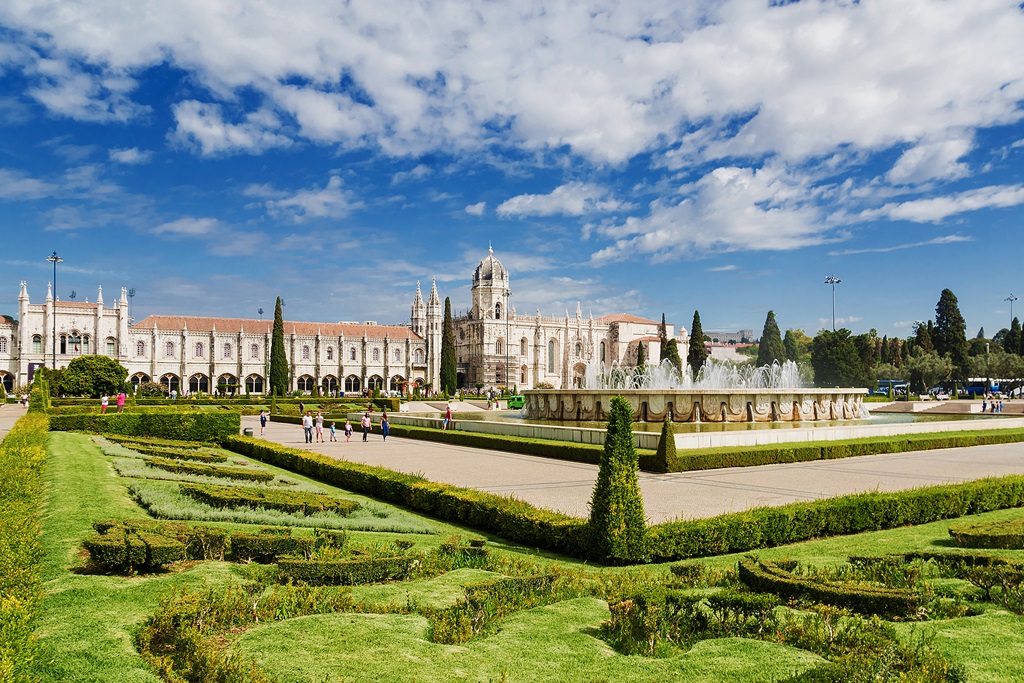 On the other hand, Igreja de São Vicente de Fora is one of the mandatory things to see in the capital of Portugal. The country’s first king, Afonso Henriques laid the first foundation stones in the 12th century. The big attraction are the cloisters, richly decorated with early 18th-century tile panels illustrating La Fontaine fables. Inside there’s the royal pantheon of the Braganza family, the last dynasty to rule Portugal. The figure of a weeping woman kneels before the twin tombs of Dom Carlos I and Crown Prince Luís Filipe, shot by assassins in 1908. So, don’t miss out on this big part of portuguese history.

What and where to eat: The Portuguese are known as real gourmands so it is no surprise that their cuisine is one the finest parts of visiting Lisbon. You can’t say you’ve ever been to Lisbon without trying some of the essentials, like Pasteis de nata, a sort of creamy, custard tard which originated from the above mentioned Antiga Confeitaria de Belem where are they are known as Pasteis de Belem. They are made from a secret recipe guarded for more than 200 years. Take them to go together with coffee and enjoy your meal.

Did you know that not only Switzerland has outstanding cheeses? In Portugal they are known as queijos, of which the most famous one is creamy yellow queijo da serra, made from sheep’s milk and thistle flower. The cheeses are produced in only one region, the Estrela mountains, and are served in every better restaurant.

Another national dish is bacalhau, or salt cod, which is one of the basics of their maritime tradition, due to their major fishing role on the Grand Banks of the North Atlantic. There are at least 365 ways to prepare it and you’ll try the best one at Casa do Bacalhau, in the eastern part of the city. The most popular version is bacalhau a bras, a stir fry of cod, rice, scrambled eggs, and onions, garnished with black olives.

Bacalhau’s great rival when it comes to the status of the biggest national dish is the green soup made of cabbage, onions, and thin-sliced potatoes and sometimes chourico sausage. You can find caldo verde in many restaurants across the city. Or simply just spoon into it at one of the fado clubs like Pateo de Alfama, where it will be part of the meal accompanying the show.

Every country with a coast has that one specific meal favourite among locals. In Portugal this meal is called carne de porco Alentejana and it’s pork cooked with clams that simmer in their juices and are served with roasted potatoes. If you accompany the dish by an Alentejo red wine, you’re up for a treat. Try the dish at Joao do Grao, a traditional restaurant in the Baixa area. 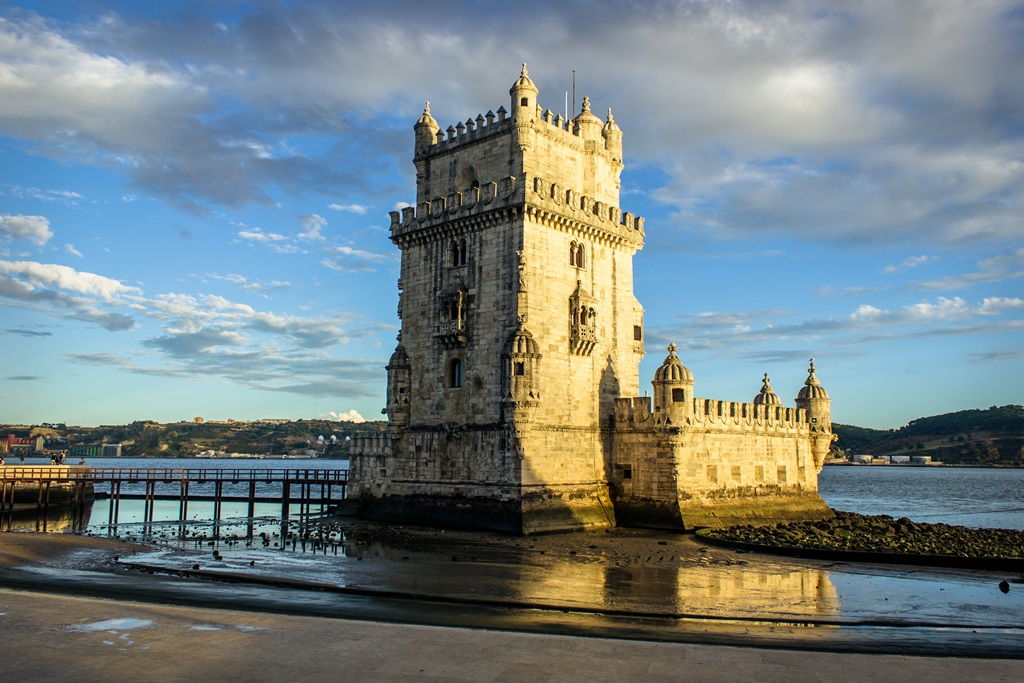