Looking at Italy’s map, Abruzzo is a region located in the south of the country. Although just a short distance from Rome, it is still mainly undiscovered by tourists. However, as more and more people are looking for undiscovered holiday destinations, Abruzzo’s popularity is growing.

That is no surprise considering all the things Abruzzo has to offer.

Visitors of Abruzzo can enjoy beautiful views of untouched nature. From snowy areas, lakes and natural springs, all the way to enchanting beaches and endless vineyards – Abruzzo’s got it all!

Besides, Abruzzo is brimming with cultural and historical heritage. Its ancient hilltop towns are becoming more and more popular among tourists.

Finally, due to its geographical position, the weather in Abruzzo is perfect. Wheater you want to enjoy winter sports or relax on one of its beautiful beaches, it will probably be sunny. November is the wettest month, May is the driest and July is the sunniest. As to temperatures, January is the coldest and August is the hottest month.

The further guide will provide you with all the necessary information if planning a visit to Abruzzo.

How to get to Abruzzo

There are several ways to reach Abruzzo, whether you are flying directly to Pescara or travelling from other cities. The closest city to Pescara outside the Abruzzo region is Rome, followed by Perugia and Naples.

The capital of Abruzzo is Pescara and its nearest airport is Abruzzo International Airport, located approximately 4 km from the city centre. It is recommended to simply get a direct flight to the Abruzzo Airport as it is the easiest way to reach any other city in the region.

If you are arriving from the capital, the distance between Rome and Pescara is around 200 km. If you take the A24 Highway until the E80/A25 exit, and then continue the A25/E80, the journey should take a bit more than 2 hours.

If you are arriving from Perugia, the road distance to Pescara is around 250 km. The journey takes around 3 hours if you take the Strada Statale 77 var della Val di Chienti and then the A14, also known as the “Adriatica”.

If arriving from Naples, the road distance to Pescara is around 240 km if you take the Strada Statale 17. The journey should take around 3 hours.

Getting a bus to Pescara is probably the easiest and cheapest way to reach the Abruzzo region if travelling from nearby cities in Italy. There are numerous bus lines that operate every day including some night buses.

If you want to get a train to the Abruzzo region, there are not too many options available as the railway system needs modernization and is not well-connected.

There is a direct train operating between Rome and Pescara and the journey takes around 3 and a half hours. It departs from the Roma Termini station and arrives at Pescara Centrale station.

Unfortunately, there are no direct trains between Perugia and Naples. 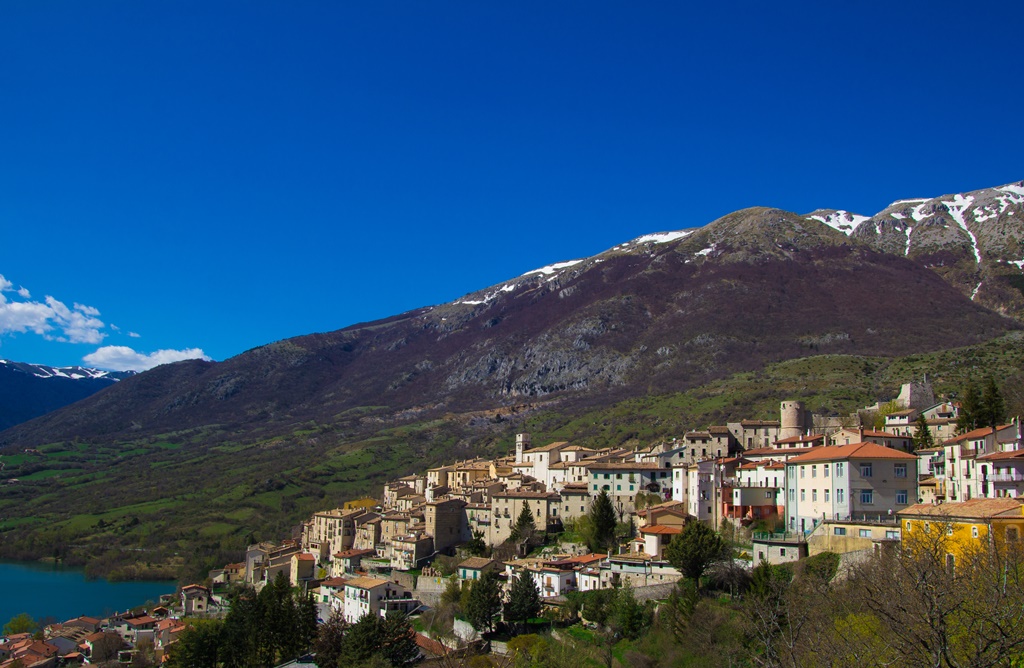 What to see and do in Abruzzo

Abruzzo’s got a lot to offer whether you’re looking for active holidays or something more laid-back. From skiing and horseback riding to amazing beaches, magnificent national parks and enchanting ancient towns, there’s a wide range of things to see and do in Abruzzo.

Obviously, the most well-known destination in Abruzzo is Pescara, its capital. It is famous for its beaches and historic city centre. Due to being a major port city, one of Pescara’s main sights is its port. It is especially beautiful at dusk when you can enjoy beautiful views of the sea accompanied by mountains in the distance. Furthermore, it is the birthplace of Gabriele D’Annunzio so some of its most important sights include the Nature Reserve Pineta Dannunziana and the famous Art Nouveau villas district (designed by D’Annunzio’s brother-in-law). 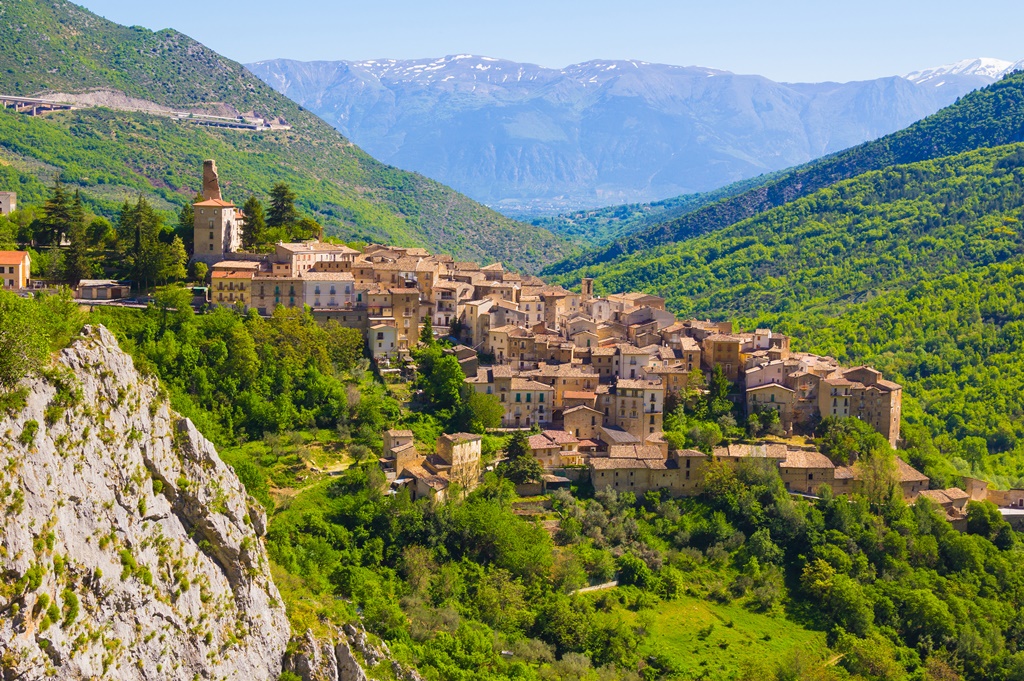 Being situated on the Mediterranean coast, Abruzzo’s beaches are absolutely beautiful. What’s more, the most famous beach in all of Abruzzo is located in Pineto. It is a charming little town and a divine seaside resort situated on the Adriatic coast, only a 15 min ride north of Pescara.

Another popular vacation destination in Abruzzo is Vasto. As the legend goes, the town was founded by Diomedes, a Greek hero that fought in the Trojan War. Furthermore, some of its earliest archaeological remnants dating back to 1300 BC. However, most of its famous historic buildings and churches, such as Vasto Cathedral, Castello Caldoresco and Palazzo D’Avalos, date from the 12th-18th century.

Last but not least, there is the Santo Stefano, a fascinating jewel of Abruzzo. It is a walled medieval hilltown situated in the Gran Sasso e Monti della Laga National Park. Unfortunately, in 2009 Abruzzo was hit by an earthquake, and Santo Stefano lost its two important architectural works – the Medici tower and the Church of the Madonna del Lago. Nevertheless, it has been declared one of Italy’s most beautiful villages. In addition, it was recognized by the Slow Food organisation due to its incredible agriculture. 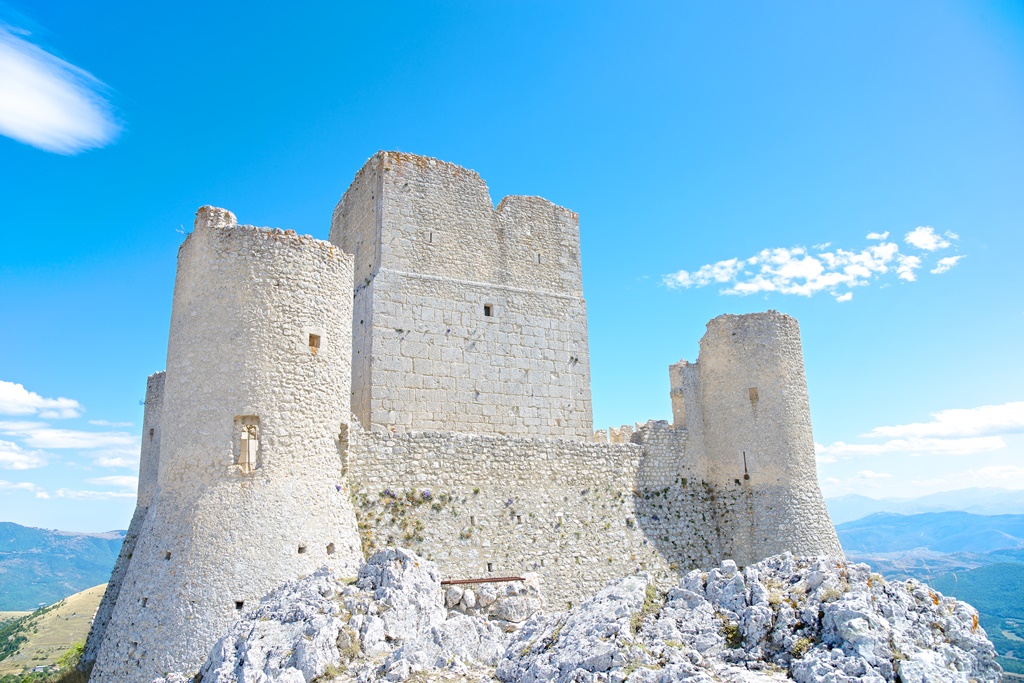 Things to do in Abruzzo

Lago di Bomba is another famous attraction in Abruzzo. It is an artificial lake created in 1962. Although its primary function is the production of electric energy, it is also a popular tourist and sports destination. Besides stunning views, visitors can enjoy various fishing, boating and windsurf activities.

Furthermore, since it encompasses the Appennines, one of the most popular activities in Abruzzo is skiing. There are numerous ski resorts such as Roccaraso, Campo Felice, Ovindoli, and Campo Imperatore.

Due to its well-developed agrotourism, Abruzzo offers numerous horseback riding tours as well as pony trekking. Besides that, visitors can experience what farm life looks like as there are numerous educational farms. However, everyone’s favourite part about experiencing farm life is, of course, enjoying its products.

Finally, holidays in Abruzzo wouldn’t be complete without visiting one of its observatories. The most famous one is the Abruzzo Astronomical Observatory, built in the 1950s and located in Campo Imperatore. Furthermore, there is also the Borgo Universo in Aielli. It was conceived as a street art, music, performance, and astronomy festival. Hence, its primary goal is to use art as a tool for promoting Aielli and encouraging alternative satellite economic activities. 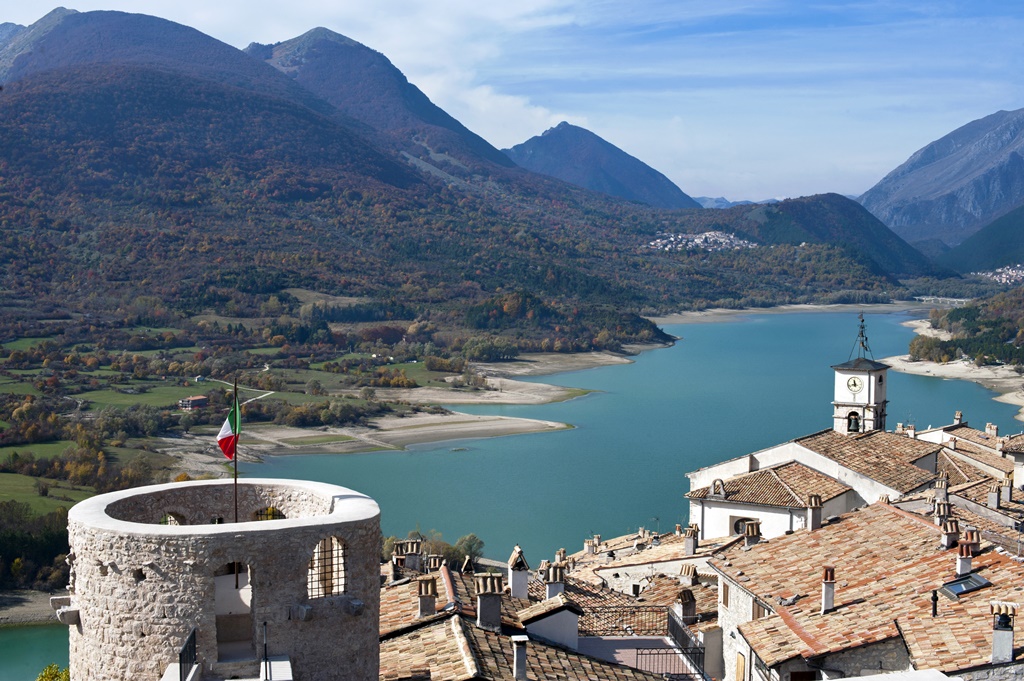 Abruzzo’s cuisine is an important part of Abruzzese tradition, especially when it comes to pasta preparation. Several pasta types originate from Abruzzo. The most well-known are Chitarrine, Sagnette, and Taccozze. The secret of making the perfect pasta has been handed down from generation to generation for many many years. Therefore, when visiting Abruzzo, having pasta is a whole new experience and definitely a must-try.

What to eat in Abruzzo

One of the main reasons why Abruzzo is such a popular tourist destination is its cuisine. Due to its geographical position, Abruzzo was isolated for a long time and thus, its local culinary traditions are well-preserved. Out of the never-ending list of delicious Abruzzo food, we picked a few dishes you simply have to try.

Besides the amazing food, Abruzzo’s wine is reviewed as one of the world’s finest. It is no surprise considering that Abruzzo is a famous wine region. Moreover, pecorino grapes are commonly used for wine production in the region. As a result, the wine is dry and mineral with a delicately floral bouquet of acacia and jasmine. However, the most famous wine in all of Abruzzo is the Montepulciano. It is a red wine with pepper and spice notes, often described as “rustic”.

Furthermore, Abruzzo is also famous for its punch. Abruzzo Punch is a liqueur whose recipe is a secret, but luckily that doesn’t stop us from drinking it. This very unique liqueur has a rich flavour and is mixed with coffee, citruses, and different spices.

If looking for the best place to try these specialities, we recommend going to family-owned restaurants. The most authentic ones will be the ones on farms, cultivating old traditions and sustaining agritourism. One of them is Agriturismo Villa Cascignoli, a farmhouse serving traditional cuisine from the region. Another top pick is Agriturismo Le Magnolie, a farmhouse whose primary goal is to respect the rural culture and tradition as well as to improve the quality of life. In addition, there is the Agriturismo La Porta dei Parchi, another farmhouse with organic seasonal vegetables. Here you can cook with their chef who will teach you some traditional recipes. That way you can take a part of the Abruzzo tradition back home with you.

Finding accommodation in Abruzzo shouldn’t be a problem. There are various options, from hotels to private accommodation. However, it is recommended to book in advance, especially before the tourist season.