Top things to do in Edinburgh

Have you ever been to one of those places that made you feel like there’s nothing more perfect on Earth? Well, Edinburgh is just that! This magical capital of Scotland is a true gem and it will leave you speechless for sure. Whether you like to plan your trip or just wander through the city – either way is fine because anywhere you go, you will be amazed! If you don’t know where to start, we’re giving you a list of things that you definitely need to do while staying in Edinburgh!

1) Take a stroll down the Royal Mile

Royal Mile is the main street in Edinburgh Old Town and it is almost exactly a mile long (hence the name). Why Royal? Well, the street begins at the Edinburgh Castle gates and it goes all down to the Holyrood Palace – the official Scottish residence of Queen Elizabeth II. Royal Mile is actually made up of five smaller streets – Castlehill, Lawnmarket, High Street, Canongate and Abbey Strand.

The first street in the Royal Mile is Castlehill. On the northern part of Castlehill you’ll find a huge souvenir shop with basically anything containing Scottish pattern. They even have a section in the shop dedicated solely to Harry Potter saga where you can get yourself a bottle of famous butterbeer! Next stop are two popular tourist attractions – Scotch Whisky Experience and Camera Obscura. Learn a bit more about the process of making favourite Scottish drink or lose yourself in the world of creative illusions on six floors!

After Castlehill, the walk will take you to the oldest part of the Old Town –  Lawnmarket. Its name derives from “land market” as this area used to be a trade market until the late 1700s. Nowadays, it is a historic gem of the city. Visit Writers’ Museum dedicated to famous Scottish writers and afterwards grab a pint of beer at Deacon Brodie’s Tavern. Namely, Deacon Brodie was a respectable tradesman and deacon whose double life inspired R.L. Stevenson’s Dr Jekyll and Mr Hyde. We find it quite interesting, and you? P.s. if you book a bus tour from Edinburgh, the majority of them use Lawnmarket bus stop as departure point. St Giles Cathedral is the first and the most notable monument in High Street. Also known as the High Kirk of Edinburgh, the church was founded in the 12th century and has played an important role in Scotland’s history. The most iconic part of the church is definitely its crown-like spire which perfectly fits the entire look of Royal Mile. Canongate and Abbey Strand are the last two streets in Royal Mile and they lead to Holyrood Palace. Some of the attractions such as the Museum of Edinburgh and People’s Story Museum can be found in Canongate, as well as the Canongate Kirk which replaced destructed Holyrood Abbey in the 17th century. 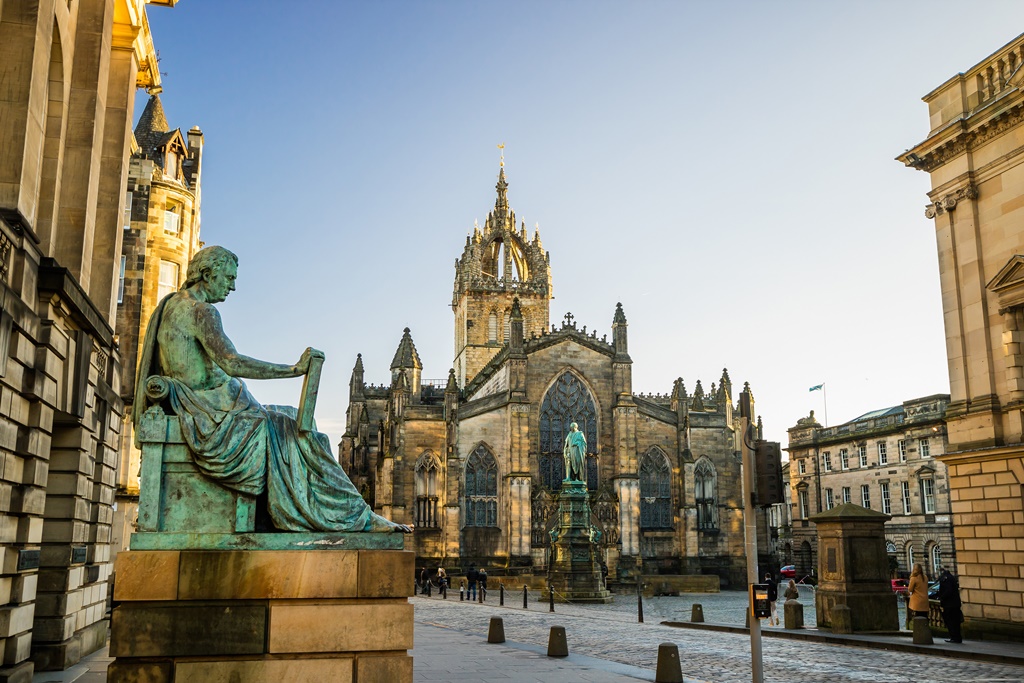 Yes, you are reading well, the museums and galleries in Edinburgh are completely free for the visitors! Where to go first? You can start your tour at the Scottish National Galleryand see some of the notable artwork displayed there, such as Haystacks by Monet, Diana and Callisto by Titian and works of other famous painters like Degas, Rembrandt, El Greco, Cézanne and Bernini. Next stop is the Museum on The Mound, dedicated to the history of British pound. Did you know that Scotland has its own version of sterling banknotes? Although any type of banknotes is accepted  in Scotland, English shopkeepers might refuse a Scottish banknote. Keep this in mind if you plan to do a trip to English cities.

As previously mentioned, Royal Mile has a plenty of free museums to visit. Start with the Writers’ Museum which celebrates the lives of three of Scotland’s most famous writers – Robert Burns, Sir Walter Scott and Robert Louis Stevenson. Other museums in Royal Mile are the Museum of Childhood, the Museum of Edinburgh and the People’s Story Museum, dedicated to amazing and interesting stories of people of Edinburgh.

The most visited museum is by far the National Museum of Scotland which receives more than 2 million visitors each year. The museum is divided in several different galleries, such as Science and Technology gallery where you can explore the history of innovations through interactive games. Get back to the world of dinosaurs with the Natural World galleries and meet in person the first cloned sheep – Dolly! Travel around the world by visiting World Cultures galleries or wake your inner fashionista at Fashion and Style galleries. If there’s one thing that we’re sure about – this museum has something for everyone and you definitely won’t be disappointed! 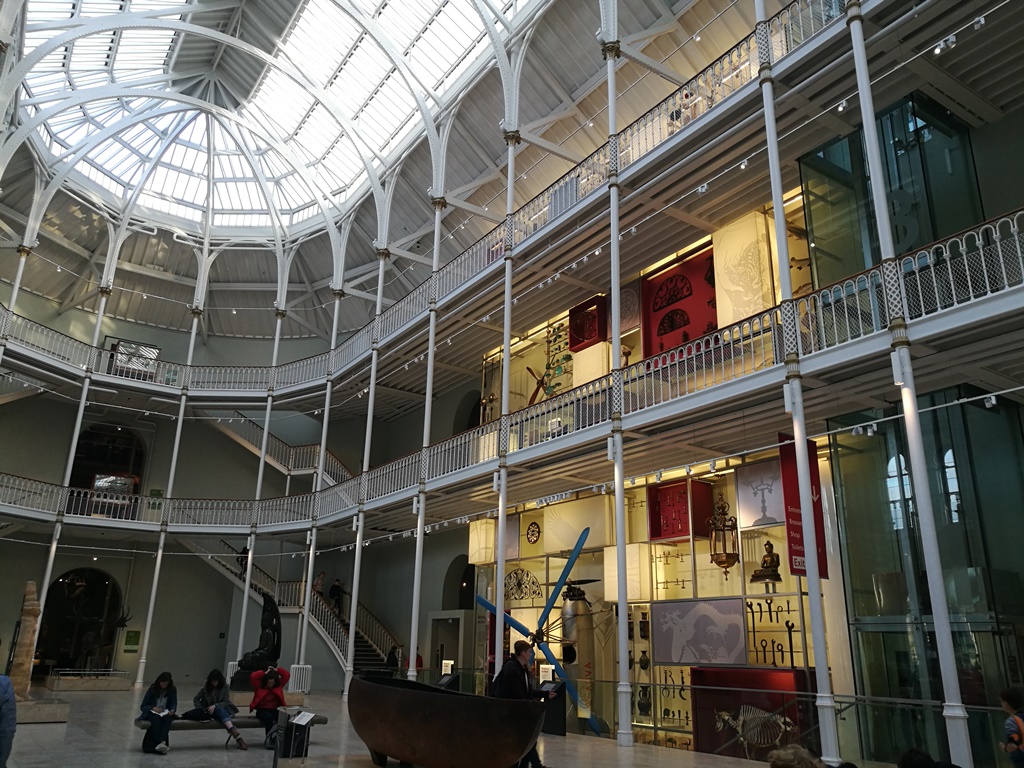 The inside of the National Museum of Scotland photo by: Melani

3) Climb the top of Arthur’s Seat

It’s time to burn those calories! Scotland is known to have quite caloric cuisine (I mean, they have deep-fried Mars bar for dessert) so you need to burn the calories somehow. And the best way to do it is by climbing a hill overlooking the Old Town, popularly called the Arthur’s Seat. Although some people say that this was the site for the legendary Camelot (King Arthur’s castle) it is unlikely that is true. Another theory about hill’s name origin comes from William Maitland’s proposition that the hill should have Scottish Gaelic name Àrd-na-Said which over the years became, you guess – Arthur’s Seat.

Just make sure to wear comfy sport shoes because at one point the path becomes very steep. The hike usually takes around 30 minutes and the best time to go is early in the morning or in the late afternoon to watch the sunset.The highest peak of the hill is at 251 meters and this is probably the best view you’ll get of Edinburgh! 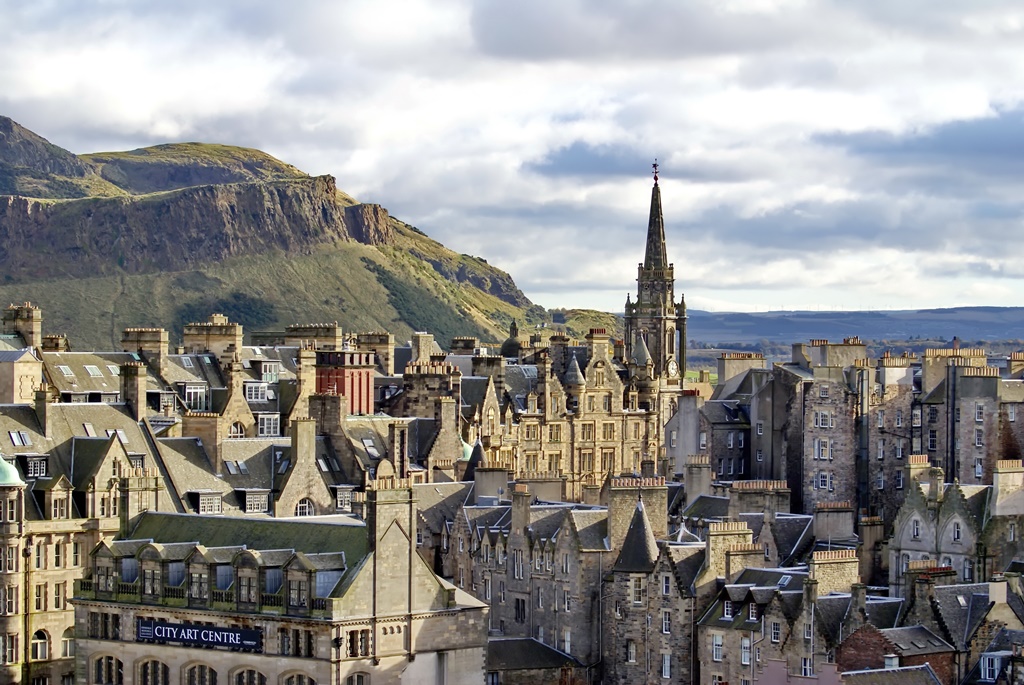 Edinburgh and Arthur’s Seat in the background photo: Shutterstock

4) Do a Scotch Whisky Experience tour

What if we told you that you can do a tour in an actual whisky barrel? You can do it at Scotch Whisky Experience museum. The museum is located at the beginning of Royal Mile, in the foot of Edinburgh Castle. An interactive exhibition in the Experience represents the majority of Scotch whisky industry – if you ever wondered how they do it. The cheapest tour costs £15 and it lasts around an hour. During the tour you will get introduced with the history of Scotch whisky while riding in a barrel, then you are going to learn a bit about different aromas of whisky and you get to taste some too! At the end of the tour you’ll get a cute gift in form of crystal whisky glass. There are different types of tours but each one includes a visit to the world’s largest collection of Scotch Whisky which comprises more than 3000 different bottles. Pretty amazing, right?

Edinburgh Castle is the most visited historic site and paid attraction in Scotland which proves the number of 2 million visitors annually. The castle is situated at the top of Royal Mile, on the Castle Rock. It was not until the 12th century that this majestic castle got entitled as “royal” when King David I ruled Scotland. The sit then continued to serve as a royal residence until 1633 when the castle’s residential role started to gradually decline. Also, did you know that this is one of the most attacked castles? There are 26 recorded sieges (although there are definitely more of them) of the castle in span of 1000 years! Even though the ticket might come off as pricey (£18) it is well worth the money. You can easily spend 3-4 hours exploring the facilities of Edinburgh Castle – discover Scotland’s war history through interesting military artefacts and treasured collections, admire royal jewel collection and see the crown from 16th century! For those who love more obscure stories about the history of the castle should definitely pay a visit to Prisons of War exhibition. See how the lives of inmates used to look like walking through reconstructed prison vaults. One of the most interesting parts of Edinburgh Castle is the One O’Clock Gun, a time signal which is fired every day at 13:00 except on Sundays, Christmas and Good Friday.

And most important of all, make sure to visit the castle because the last admission is at 16:00!

Edinburgh is without a doubt the most “photogenic” city in Europe but the best photo should be taken on Calton Hill. It is a small mound situated at the east end of Princes Street and it is easily accessible. It takes maybe 5 minutes to climb the mound but the amazing views of the city centre will hold you up there for at least half an hour. Besides being a great photo spot, Calton Hill is as well a UNESCO World Heritage site and a location of several famous monuments such as the National Monument, the Nelson Monument and the City Observatory. If you are really interested in Scottish tradition, don’t miss the Beltane Fire Festival. This festival is held every year on 30 April on Calton Hill. The inspiration for the festival comes from the ancient Gaelic festival of Beltane. Be a part of amazing fire performances and salute the beginning of summer together with the locals! 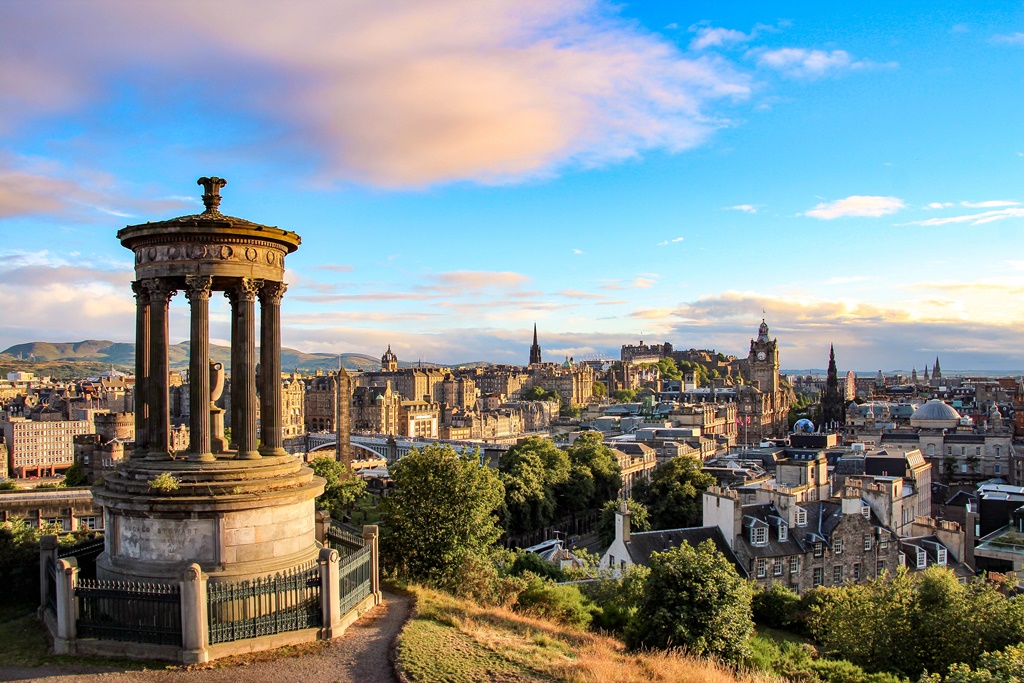 Though born as an Englishwoman, J.K. Rowling spent her life-turning years in Edinburgh. When she was at the verge of poverty and a single parent, she moved to Edinburgh to be close to her sister. Little did she know that she would write one of the bestselling books of all times. During that hard life period, Rowling managed to find comfort in writing. It was the Elephant House cafe where she would spend her time writing the first book of Harry Potter series. Imagine how cool it would be to sip a cup of coffee in birthplace of best wizard of Hogwarts? Curious about how J.K. Rowling got inspired with the names of her book characters? Then look through cafe window! Just across the Elephant House cafe is located Greyfriar’s Kirkyard, a graveyard with tombs and graves of notable Scots. You’ll find tombs of Robert Potter, William McGonagall and Thomas Riddell – sounds familiar, right? 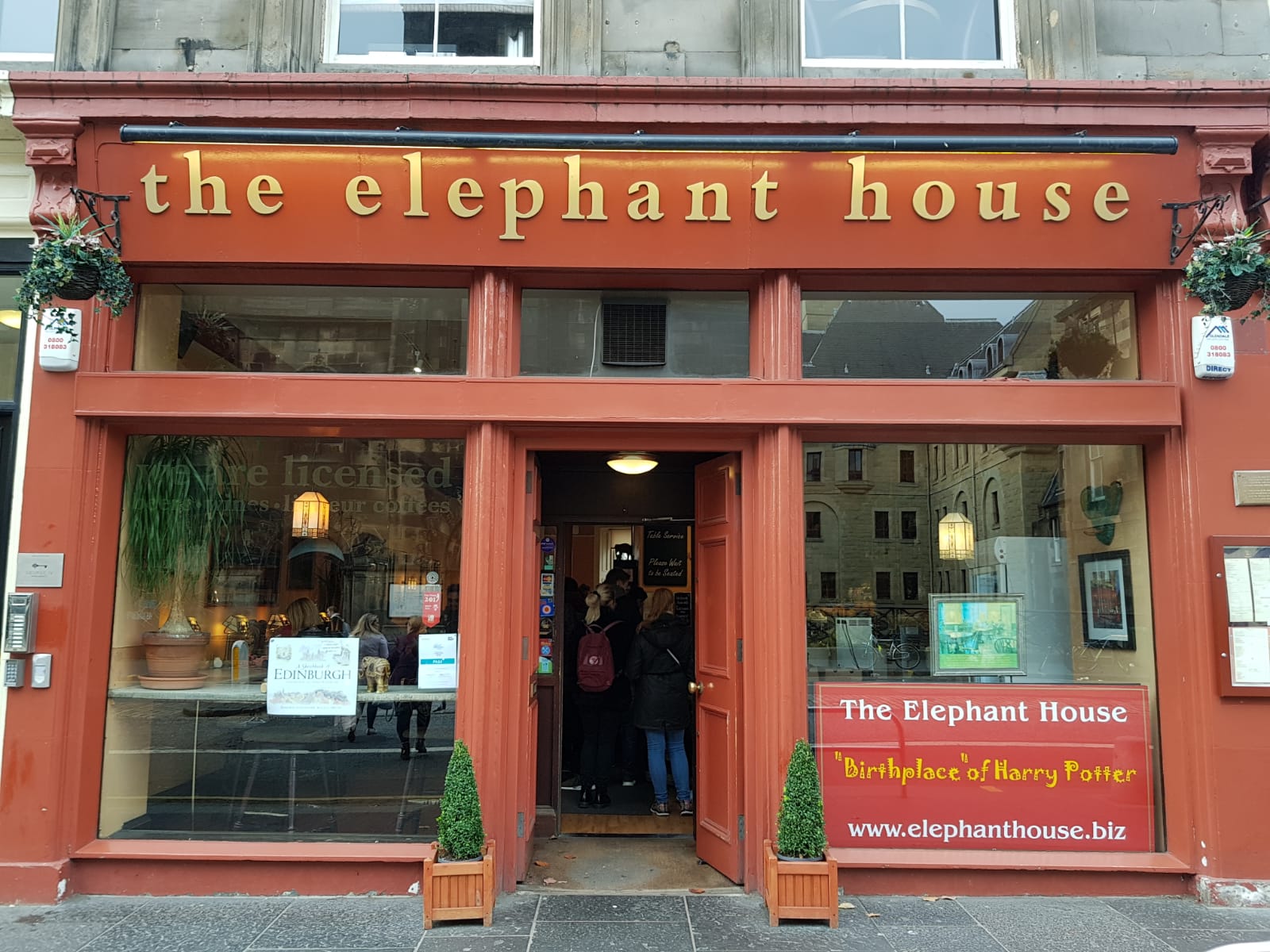 Elephant House – the birthplace of Harry Potter photo by: J.R. (@radicjos on IG)

Circus Lane in Edinburgh must be one of top places for snapping amazing photographs. Even though it is just a regular with no particular sights, you’ll fall in love with it in an instant! Cobbled street decorated with flower pots and hanging baskets will make you feel like you are in some kind of fairytale. And did you know that this street was once used as a service street to keep coaches and horses?

Only 5-minute walk from Circus Lane and you’ll reach Dean Village. Walk down the green promenade where you can enjoy in peaceful, soothing Water of Leith. And the end of promenade hides the wonderful Dean Village, a part of Edinburgh that will take you back in time. Keep in mind that there are no restaurants or public bathrooms in Dean Village, so stock up on food if you plan to spend a bit more time here. 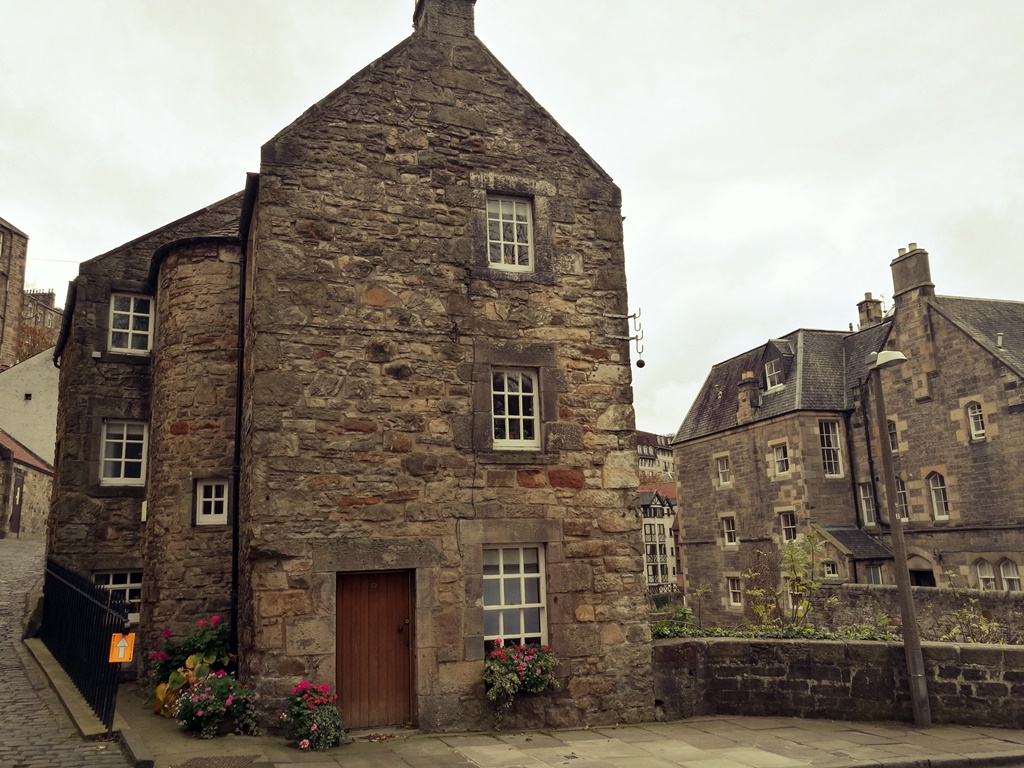