Tenerife North Airport (TFN), once known as Los Rodeos Airport, together with Tenerife South Airport is an international airport on Tenerife Island. It is located approximately 10 km from the capital Santa Cruz de Tenerife, in the municipality of San Cristobal de la Laguna. Since it is a hub airport, it connects all seven of the Canarian Islands with Spain and Europe. 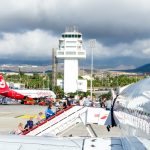 There are several ways to get to and from Tenerife North Airport, including public transport, private transfers and even a car rental. The airport is well connected with the rest of the island and it offers quite a few transport possibilities

Tenerife North Airport is connected with several towns on the island by shuttle buses. Buses are operated by Flibco and available to book online on Getbybus:

There are several bus connections from the airport to the capital city:

Tickets don’t have a fixed price, because the final amount depends on the route, departure and arrival station. You can calculate the final price here.

NOTE: If you buy a round-trip ticket on the same day you get a 10% off the single ticket price. This discount is valid only for distances greater than 20 km.

It is advisable to take the official taxi from the marked taxi stand at the terminal. Prices depend on the departure time (day/night) and date (workdays/weekend/holidays). Starting price is around 3.15€/3.45€ and standard price per kilometer is approximately 1.10€/1.26€.

Another way to travel from Tenerife North Airport is with a private, door-to-door transfer directly to your accommodation in the city. You can pre-book a transfer for a hassle-free experience, a professional driver will wait for you at the airport and take you to your destination.

If you prefer traveling by car and you want complete freedom on your trip, renting a car would be a great option for you. Car rental offices are located at the arrival terminal at Tenerife North Airport. You have several companies on your disposal, such as AutoReisen, Avis, Cicar, Hertz, Europcar and Goldcar Rental. On the other hand, you can book a car in advance.

If you are travelling in a larger group, you should consider renting a bus at the airport. It is always recommendable to book it online, so the bus rental companies have enough time to provide you with all the required information such as meeting point, time and more.

Should you need a direct transfer from one airport to another, you can book a shuttle bus ticket via Getbybus:

Does Tenerife North Airport have WiFi?

Is it allowed to smoke at Tenerife North Airport?

Smoking is only allowed in special areas outside the terminals.

Can I exchange money at Tenerife North Airport?

Of course, there are three ATMs located on the Arrival terminal and one bank.

I arrived late at Tenerife North Airport. Will it be a problem for me to get to the city?

Not at all, you can reach the city with the night bus line 104, pre-book a transfer or take the taxi.