Sicily is the largest of the Italian islands, moreover, it is the largest island in the Mediterranean Sea. It is separated from the Italian peninsula by the narrow Strait of Messina. The island was inhabited 10,000 years ago and today’s capital is the city of Palermo.

The most prominent landmark of the island is Mount Etna, one of the most active volcanoes in the world and the tallest one in Europe. The island has a Mediterranean climate with mild and rainy winters and sunny and hot summers. The Sicily weather with pleasant temperatures allows you to visit Sicily throughout the year.

This gorgeous island has many historical treasures and a dazzling diversity of landscapes. All of nature wonders such as mountains, hills and the sea with incredible colors can be found here. Travel to Sicily and discover the best places with intense sceneries, timeless masterpieces, traditional flavors and many more during this weekend trip!

If you are flying to the island, you can choose between seven Sicily airports, with the main ones in Palermo and Catania. You shouldn’t have problems with finding a suitable hotel or other types of accommodation for yourself.

The bustling metropolis of Palermo will easily seduce you with history, cultural variety, and amazing gastronomy. Start the day with a visit to street markets, our recommendation would be Capo and Ballarò. Fill your stomach with some of the best Sicily food.

Our next stop is the Norman Palace decorated with mosaics and wonderful Islamic style wooden ceiling. This oldest royal residence in Europe was the seat of the Kings of Sicily during Norman times. Its highlights are the Ruggero Hall decorated with a plant, animal and ornamental mosaics covering the walls, vaults and arches and also the Palatine Chapel, a fusion of Norman, Arab and Romanic style. 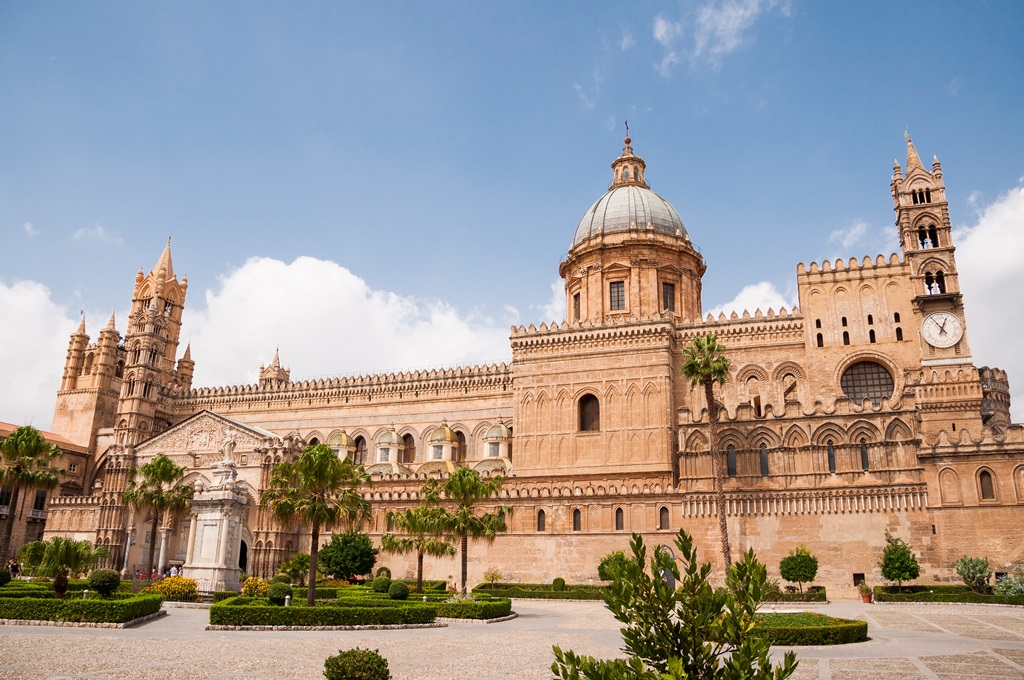 After the Chapel, head towards the Cathedral passing along the most ancient street in the city, Cassaro. The street created by the Phoenicians is lined with noble families’ palaces from the 18th and 19th century. The Cathedral has a very long history, it was built during Norman times and renovated over time, mostly in gothic style. The outside appearance is remarkable, highlighted by warm limestones glowing in sunset time.

Another not-to-miss in Palermo is one of the most popular Sicily catacombs, Catacombe di Cappuccini. Catacombs consist of several galleries divided into different corridors sorted by gender, age and profession, and they hold more than 8000 bodies of Capuchin friars, nuns, children, teachers, and aristocracy.

If you are already a bit tired of sightseeing, you could spend the afternoon on one of the most famous Sicily beaches located in the city of Mondello, 13 kilometers from Palermo. You can take bus number 806 which runs every 20 minutes. Mondello city is a former fishing village, a charming place with a gorgeous beach and crystal clear sea. 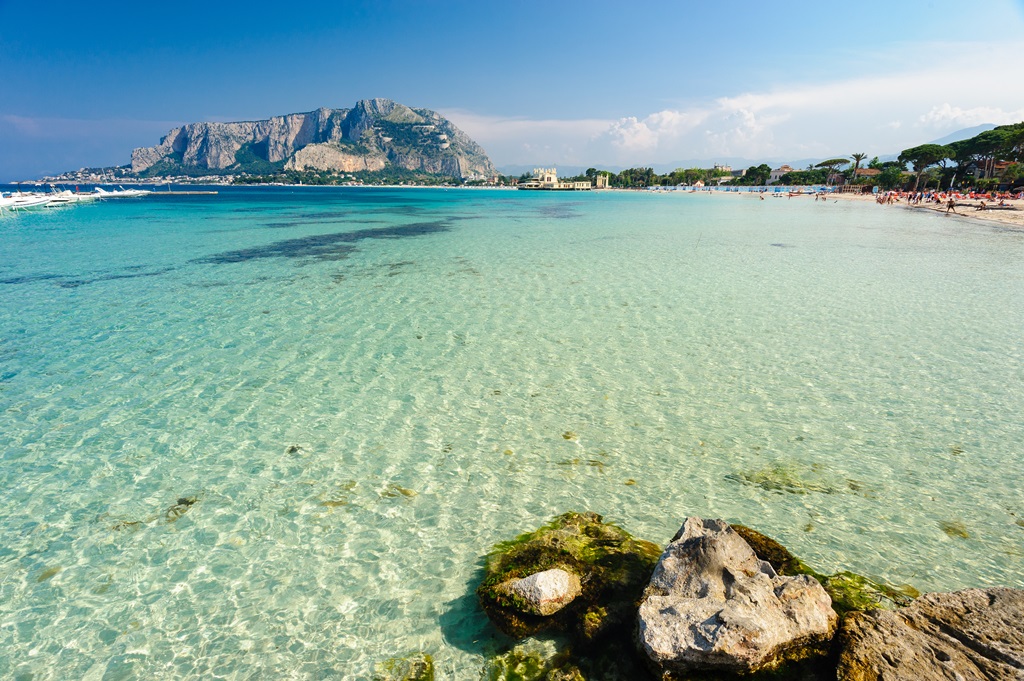 Pizza has been a part of Italian heritage for centuries, so it is time to show some respect to the tradition and enjoy the perfect Sicilian pizza. No matter where you eat it, it is never served as a slice, but as a whole pie. The crust is handmade and hand-stretched and cooked in a wood-fired oven. Our recommendation for pizzeria in Palermo would be Frida since it is often mentioned as one of the top 15 pizzerias in the whole of Italy. 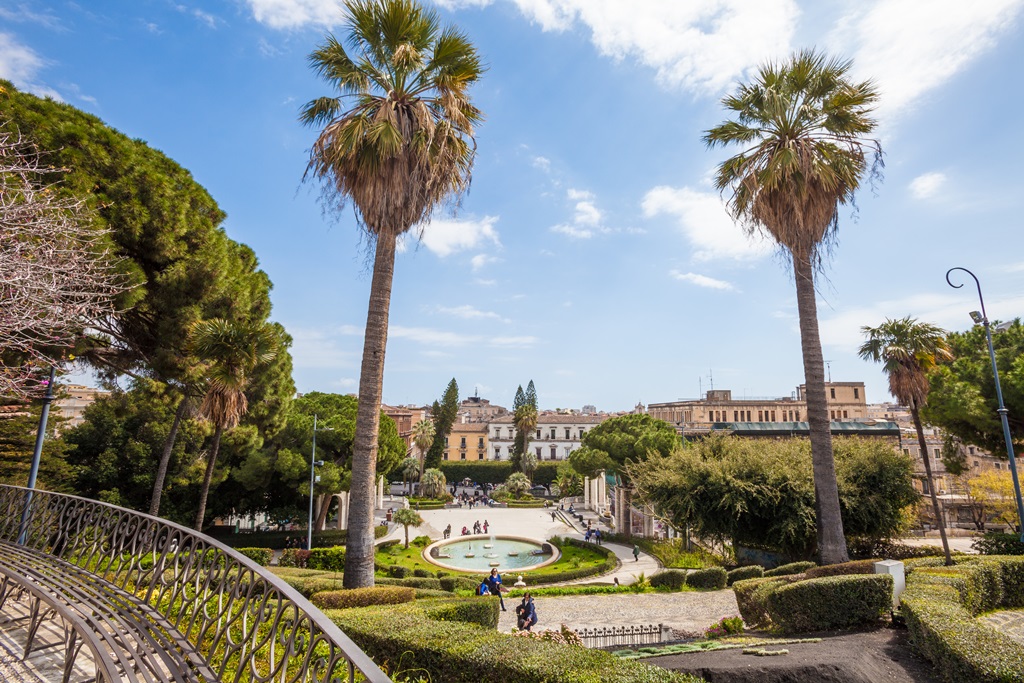 In order to experience more of the island’s character, you should visit Catania, Sicily’s second-largest city. Wake up early because it is 2.5 hours drive from Palermo to Catania. Renting a car is possible in different places in Palermo, but also online.

Start the sightseeing in Piazza del Duomo, the heart of the city. The square is familiar with the Elephant’s Fountain depicting an elephant made of black lava with an Egyptian obelisk. The legend says that the statue has the power to appease Etna’s volcano anger. Right behind the Fountain, there is the Cathedral you can visit free of charge. The facade is beautiful, all covered in white marble. The main street filled with restaurants, local shops, and souvenir shops is Via Etna that got its name from the view you have when walking there. 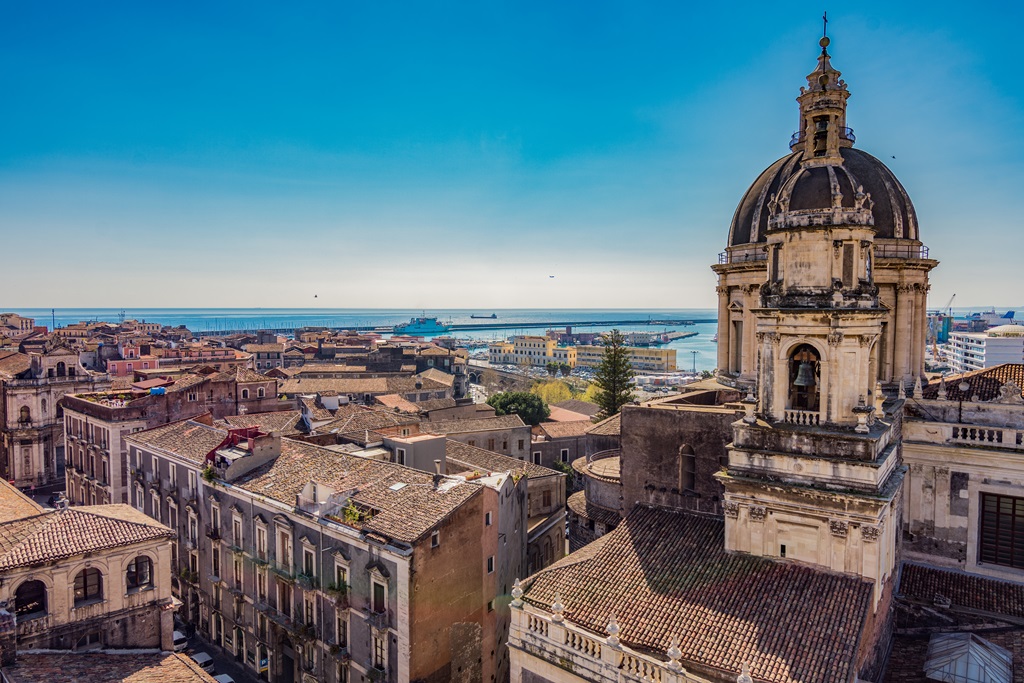 It is lunchtime so pick a restaurant to try unique Sicilian cuisine, which is similar to Italian but with Greek, Arab, France, and Spanish touch. Don’t leave Catania without trying typical dish Pasta alla Norma, a combination of aubergine, tomato sauce, and salted ricotta served with pasta.

Villa Bellini, the oldest urban park in the city with marvelous gardens, is the next stop. Gardens are perfect for a walk, a picnic, or simply for chilling in the shade. Festivities and concerts are organized in the park on a regular basis.

Another street to visit is Via Crociferi, often mentioned as “the Church Street” because it houses 4 different churches, most of them opened only during morning hours. A must-see attraction is the former Benedictine Monastery of San Nicolò l’Arena. The second largest university in Europe is also placed there and you can visit it by yourself or with a guide.

Ursino Castle is a Norman fortress housing the Municipal Museum, another attraction free of charge. The Castle was originally built on a cliff overlooking the sea, but due to many earthquakes and eruption of Etna in 1669, today is located about 1 kilometer inland.

Call it a day with a glass of Aperol Spritz in your hand. 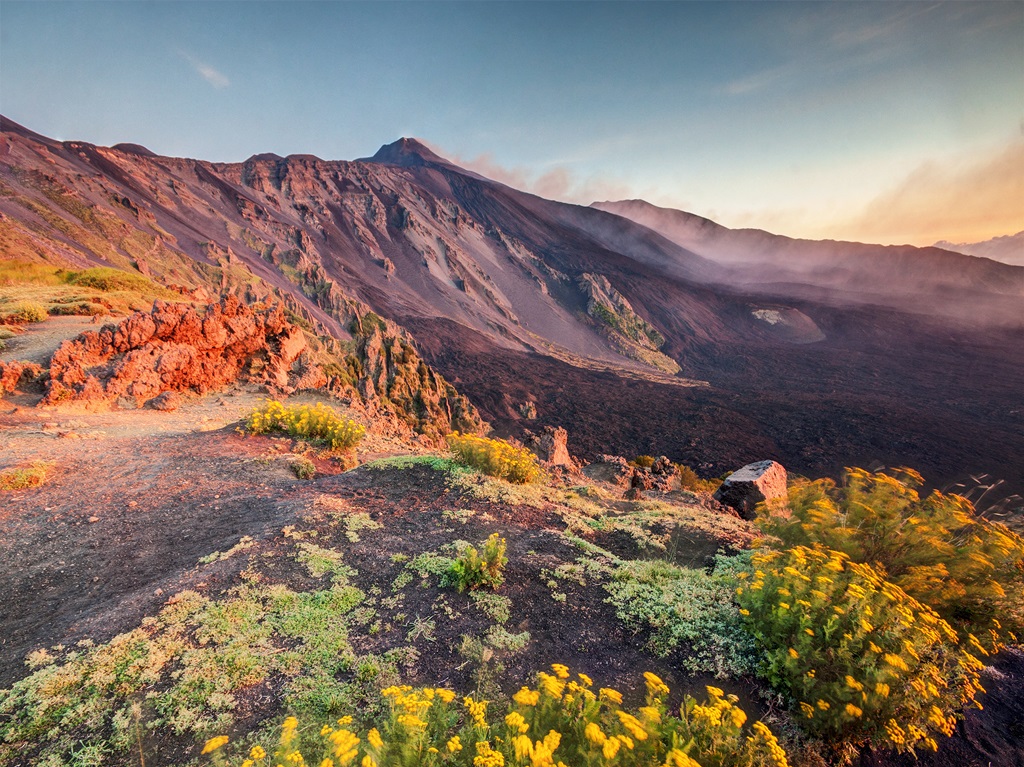 On your third and last day in the region, we recommend you to visit the Etna Volcano that can be hiked or walked all year round. Its scenery of volcanic rocks, black sand, and oozing lava is both amazing and terrific. You can choose to go by car or catch the AST bus leaving near the Central train station. With a cable car Funivia from Rifugio Sapienza, you will reach the height of about 2,500 meters. From there you can join a guided hike or take a tour with a jeep to see the active cones on top of Etna. On your way to the top, you will have amazing views of lava fields, woods, and vineyards. From November to March you can ski the snow-covered slopes. Keep in mind that at times public access to the top can be prohibited due to safety reasons.

Before you climb the mountain, some notes: firstly, wear comfortable shoes and clothes, also, bring a jacket, Etna has an average temperature of 10 °C. A pair of sunglasses would be useful too. There are some tourist points and restaurants selling food and drinks. 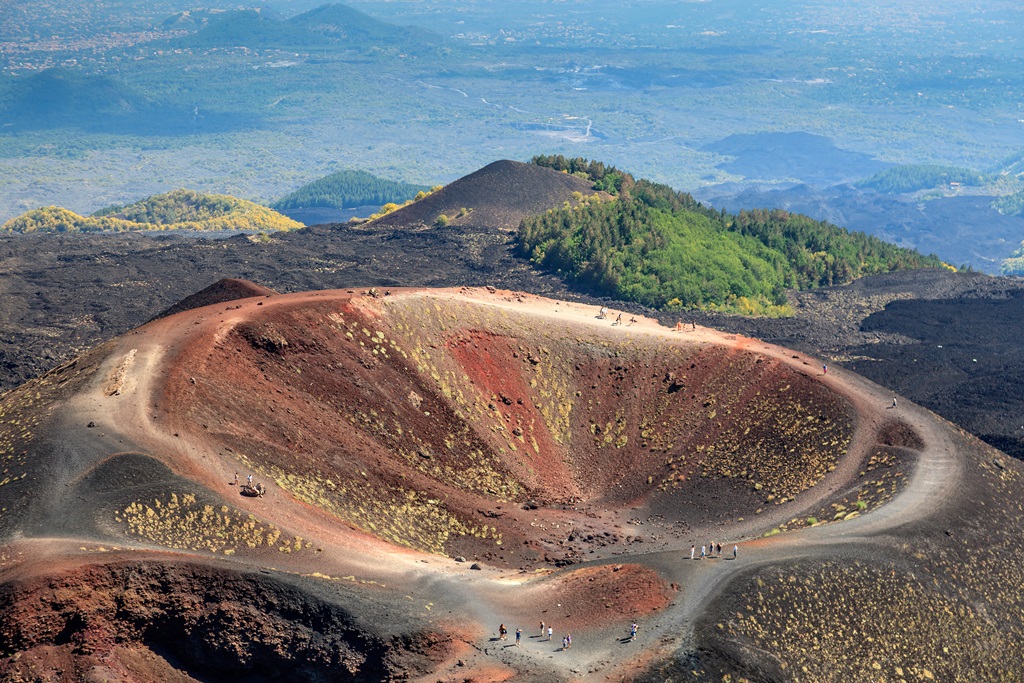 When you are done admiring Etna, you could visit Messina, the third largest city in Sicily. The city is known as the door of Sicily because it is a popular cruise port and the first place seen by travelers who come to Sicily by car or ferry. One of Messina attractions is the Cathedral with late-Gothic portals, a mosaic of Christ and one of the most complex mechanical and astronomical clock of the world. On the left side of the bell tower, you can find one of the most beautiful European fountains of the 1500s, Fountain of Orion. Another extraordinary fountain is also the Fountain of Neptune.

We totally understand if you decided to stay a little bit longer than planned, so we have prepared some recommendations on what to visit, including several Sicily cities:

Syracuse is a historic city, notable for its rich history and culture; the city was founded by the Ancient Greeks and today it is listed as a UNESCO World Heritage Site. Make sure to visit the Greek Theatre, one of the biggest in the world. The Cathedral in Syracuse is a mixture of both pagan temple and a Christian church and the Church of Santa Lucia alla Badia is special for a masterpiece created by Caravaggio. 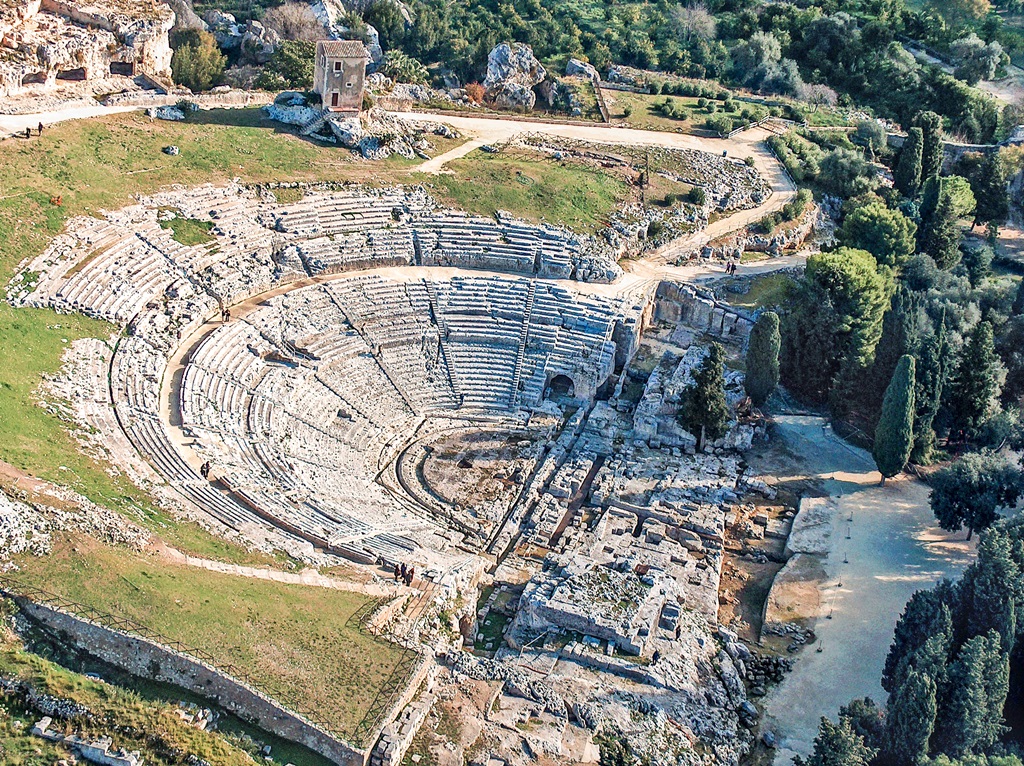 Valley of the Temples is probably the most impressive Greek archaeological site in Sicily. It is a fascinating group of monuments of Magna Greece, including the temple of Castor and Pollux, the temple of Olympian Zeus, the temple of Concordia, etc.

Marsala is another ancient coastal town rich in history and charm. The name Marsala comes from Marsa Allah – the port of God. The city is famous throughout the world for its excellent wine. Some of the most attractive Sicily islands are located in this area; Favignana Island is known for caves and calcarenite rock formations. It is perfect for a boat trip or diving. Levanzo Island is the smallest of Aegadian Islands and the main village of Levanzo is a very picturesque place. 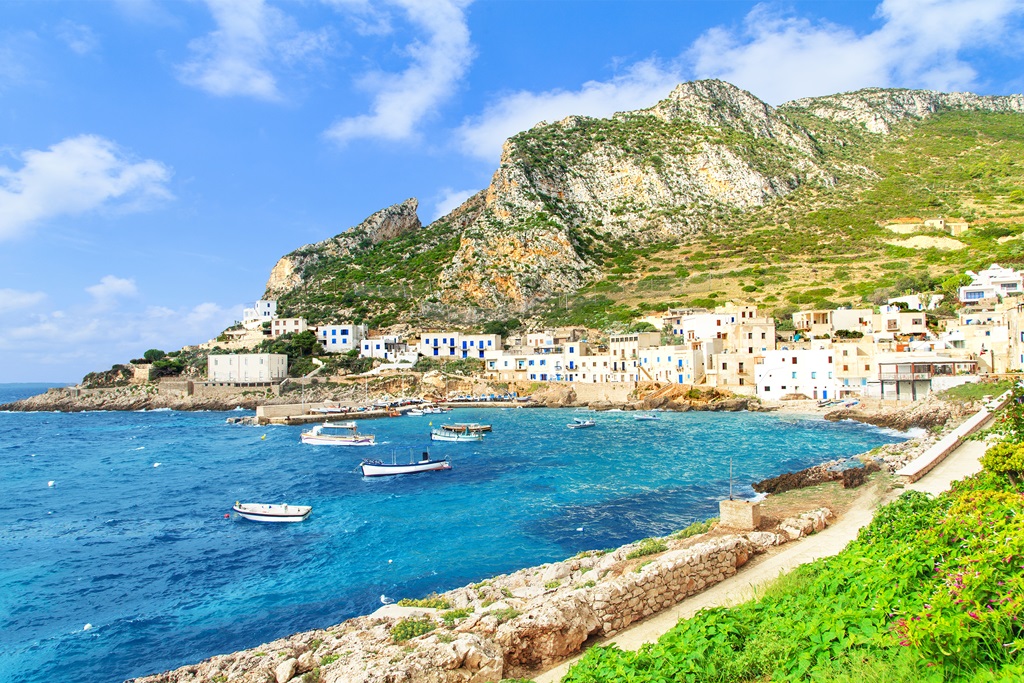