Kravica Waterfall, often called Kravice, is one of the most precious jewels of Bosnia and Herzegovina, a large tufa cascade waterfall on the Trebižat River. It is located close to Ljubuški and about 40 km from Mostar city. This site is an inevitable day trip often combined with Međugorje, Koćuša Waterfall and a few more Bosnian biggest attractions. The popularity of Kravice Falls is still on the rise, so hurry up to visit one of the best-kept secrets of beautiful Bosnia and Herzegovina.

The following guide will give you all the necessary information for planning your trip to Kravica Waterfall.

How to get to Kravica Waterfall

If you want to visit Kravica Falls, you can book one of the numerous organized tours to get there carelessly. The tours are often organized from cities such as Mostar and Sarajevo, as well as Dubrovnik and Split in Croatia. However, if you want to visit the site on your own, you’ll need to prepare a little bit. Here are all the options to get to Kravica site.

The easiest way to get to Kravica Waterfall is by car since every other way of travelling is more complicated. If you don’t possess a car, but would love to travel with one, you can always decide for a car hire in the city you’re staying in. Moreover, avoid the hassle and rent a car online.

You can visit Kravica Falls from several directions, the most popular cities from which you can make this day trip are Mostar, Sarajevo, Dubrovnik and Split.

If driving from Mostar, the ride will take less than an hour. You can choose between several roads, the fastest route is via R424 road which also takes you to Medjugorje, one of the popular pilgrimage sites in Herzegovina. The two other routes (via E73/M17 or M6) pass by the charming village of Počitelj, as well as a picturesque village Blagaj.

If driving from Sarajevo, you will first have to reach Mostar via E73/M17 or R433 in order to continue to Kravica.

If arriving from Croatia, it is very likely you are arriving from Dubrovnik or Split as these two tourist hubs of Croatia are the closest. From Dubrovnik, you can choose between two routes, inland via M6 and coastal one via D8. The ride in both cases is about 2.5 hours.

Those arriving from Split can choose to go via E65 (the highway). The ride takes less than 2 hours and the route has tolls. 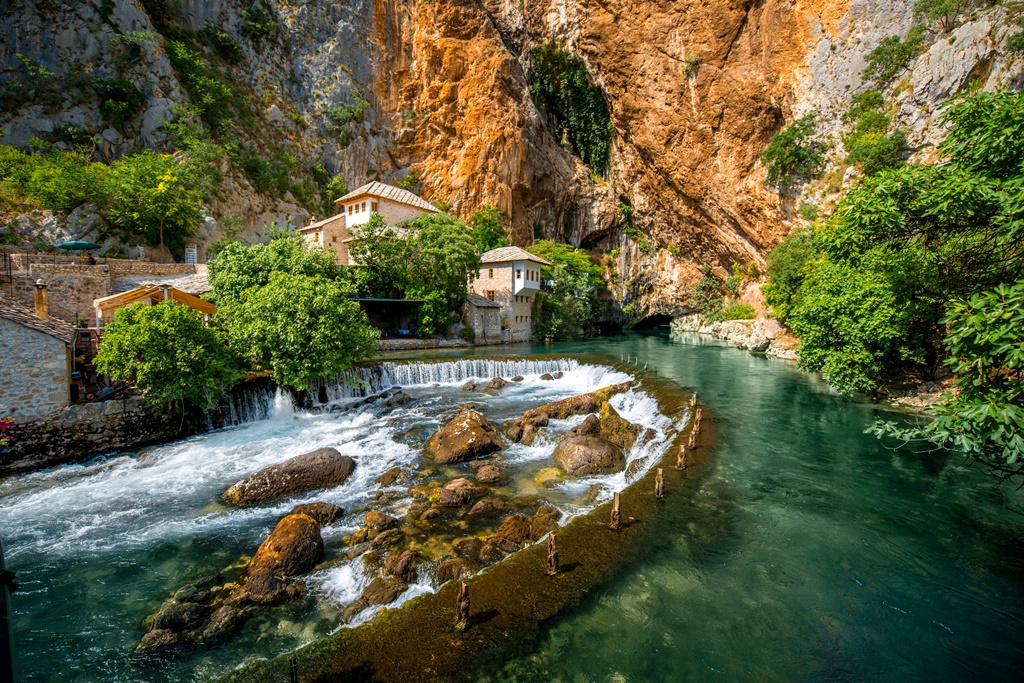 Unless you book an organized bus tour to Kravica Waterfall, getting there by bus on your own is not the most convenient way. However, travelling by bus works only if you’re already in Bosnia and Herzegovina, namely Mostar. The closest you can get by bus is to Ljubuški or Čapljina from where you need to continue by taxi. Still, have in mind that taxis in Bosnia and Herzegovina might not have fixed prices and it all comes down to negotiation.

Check the details about bus tickets and departures below.

The site of Kravica Falls is open all year round with the following working hours, depending on the season:

Once you get to the entrance of the site, you will notice a large parking lot where you can leave your car. There is also a ticket office and toilet at the entrance. Once you enter the park you can choose to get down to the falls on foot or by train that is not included in the price.

Below is the table of the prices valid for 2021. Have in mind that prices might change, we will update accordingly, but you can always double-check on the official website.

What to see and do at Kravica Waterfall

Visitors come to Kravica Waterfall primarily to admire the beautiful nature and spend some quality time outdoors. However, there are more things to explore besides the falls, here is the list of interesting sights and activities in the area.

Of course, the splendid waterfalls of the Trebižat River are the main attraction of the site. The height of the fall is about 25 meters and the radius of the lake beneath the fall is about 120 meters. The scenery of the site changes throughout the year thanks to the water level. Therefore, due to the lower water level in the pool below the waterfall during the summer months, it is possible to swim and enjoy water sports.

Activities such as hiking and swimming in the lakes are truly a nice experience. You can spend a day in nature and refresh in the water, you are also allowed to arrive fully equipped with all sorts of games for you and your friends. If possible, discovering an area by bike is one of the best ways to do it.

One more way to explore the area is to jump in a canoe. The river Trebižat is rich in biodiversity with many plant and animal species and unique travertine barriers. This is an exceptional natural landscape with truly untouched nature. 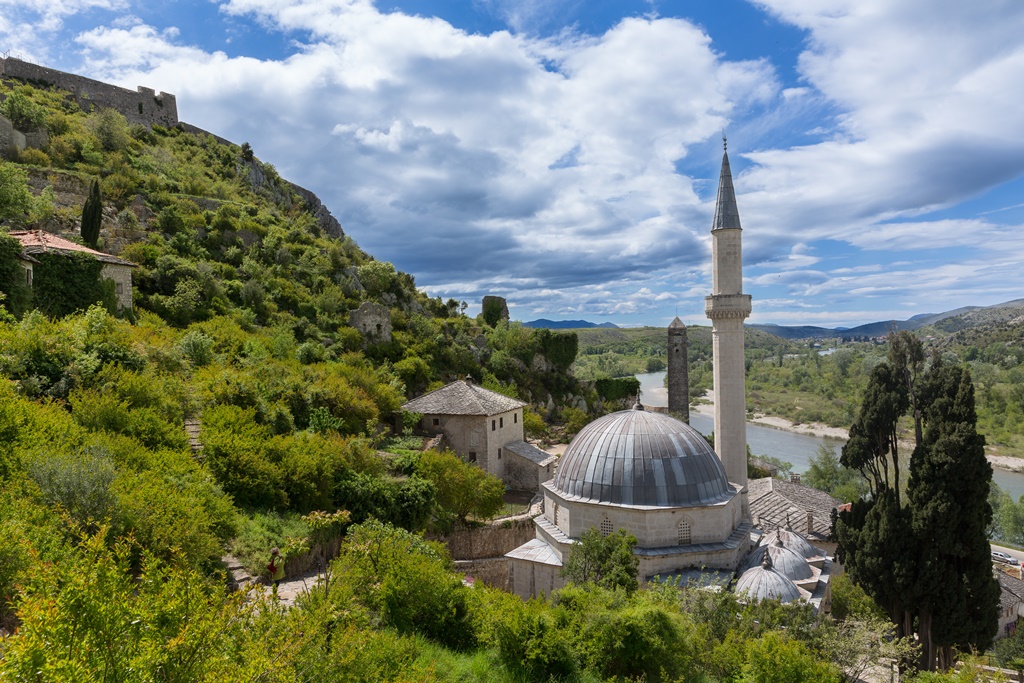 Another interesting site located in Humac is the ancient military camp from the 1st-3rd century. There lie the remains of a Roman military complex, partially explored and conserved from 1977 to 1988. Among the artefacts that were excavated are remnants of pottery, jugs, vases, coins, jewellery, rings, glass, tools and weapons. The archaeological site was declared a national monument in 2003.

The fortress of Herceg Stjepan

The remains of the fortress attributed to Herceg Stjepan, a 14th-century nobleman from Herzegovina, overlooks Ljubuški. In written sources, Ljubuški is first mentioned on February 21, 1444, under the name Lubussa.

An interesting site lies nearby Ljubuški and it includes 214 stećak tombstones, of which 88 slabs, 78 chests, 1 chest with pedestal, 9 sarcophagus and 48 specimens of not individually described slabs and chests. Most of the monuments belong to the 14th and 15th century, some examples perhaps even to the 12th century.

Try not to miss another charming waterfall located in the village of Veljaci, about a 20-minute ride from Kravice Waterfall. The fall is about 5 meters high and 50 meters wide. The natural wealth of this area consists of sedimentary rocks, the so-called tufa that has been deposited for years. It all makes the site incredibly beautiful and worth a visit if nearby. 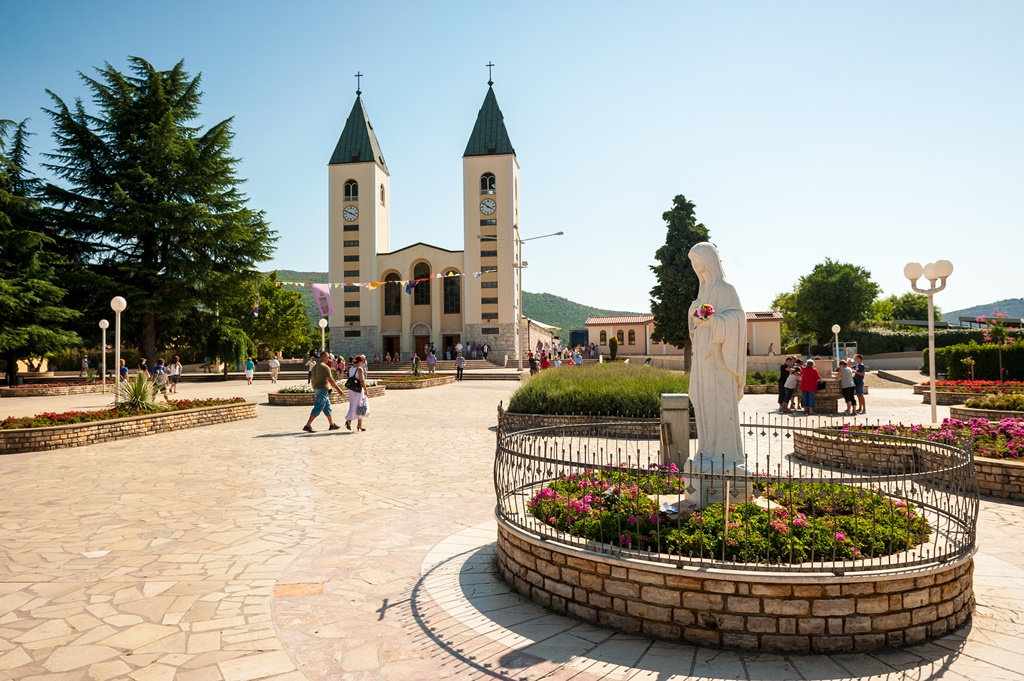 Medjugorje Sanctuary in Bosnia and Herzegovina, close to Mostar

It is impossible to visit Bosnia and Herzegovina and leave hungry. The same applies to the Kravica Waterfall. There are a few restaurants around the lake that offer an “Instagram-like” view of the waterfall. Moreover, they serve the well-known local specialities you have to try. If you don’t know it yet, Bosnia and Herzegovina is one of the most affordable countries in Europe! 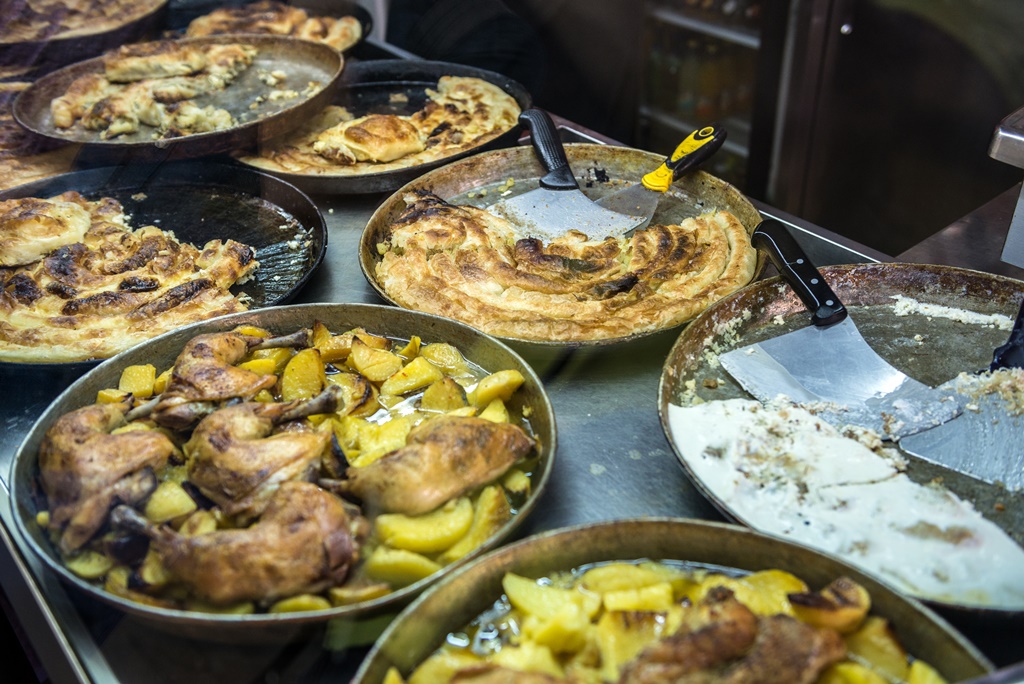 If you want to stay overnight, we suggest you do it in Mostar as there are plenty of accommodation options. However, check out the possibilities below:

Already been to Kravica Waterfall? Tell us your experience below!