John F. Kennedy International Airport (JFK) is an international airport located in Queens, New York, just 12 miles southeast of Lower Manhattan. JFK Airport is one of three airports in the state of New York, the other two being LaGuardia and Newark.

How to get from JFK Airport to New York

NYC Express Bus is the official shuttle bus for all New York airports. The shuttle bus connects JFK Airport with Manhattan, as well as with La Guardia Airport and Newark Airport. They run every day from 11 AM to 7 PM. A roundtrip ticket from JFK to Manhattan will cost you around $35.

If you need to get to Manhattan and want to avoid the hassle of switching buses, there are other options. You can take one of the privately operated buses which will take you from JFK Airport directly to the Port Authority Bus Terminal, located in Midtown. For prices and timetables, check the below provided links.

If your end destination isn’t New York and you just need to switch airports, that is not a problem. There are direct bus lines that take you from JFK Airport to LaGuardia Airport. For more information about departure times and prices, check the links below.

Probably the cheapest option to get to and from the airport would be the MTA city buses. The buses are available 24/7 and you can find them at the bus stop on Terminal 5. Bus lines Q3 and Q10 will take you to Queens, while bus B15 takes you to Brooklyn. The price for a single bus ticket is around $2,75.

JFK airport has an AirTrain system in place which interconnects the airport terminals and continues all the way to Jamaica Station and Howard Beach Station. AirTrain is free when traveling between terminals, but if your start or end point are Jamaica and Howard Beach Stations then you have to pay a fee of approximately $7,75. From here on you can take the MTA buses and subways, as well as the LIRR (Long Island Rail Road) to your desired destination.

Keep in mind that you need a MetroCard to exit the AirTrain, which you will be able to purchase at these locations.

New York City’s Subway is the oldest and largest rapid transit system in the world, with around 472 stations. It is the best public transportation system to travel around the city because it connects the boroughs of Manhattan, Brooklyn, Queens, and the Bronx. The Subway is operated by the MTA (Metropolitan Transportation Authority), the largest public transit authority in the USA.

Travelling by train is the best option if you want to go to Long Island from JFK. You’ll need to get to Jamaica Station first, there you can find trains serving LIRR (Long Island Rail Road). 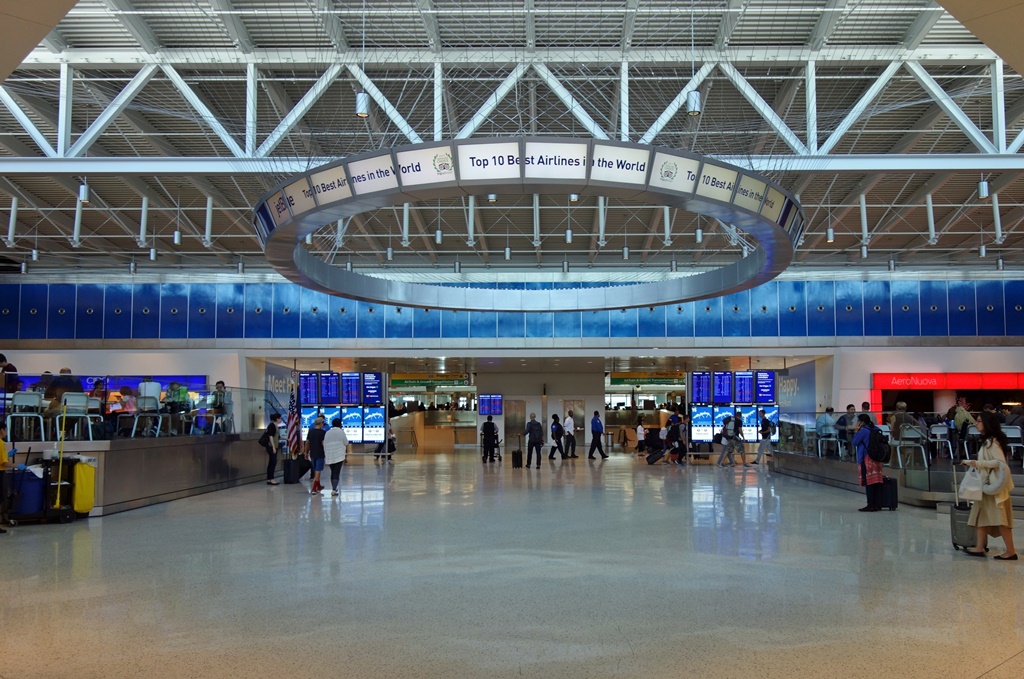 If you want to avoid the hassle of public transport, you should consider taking a taxi. New York City’s yellow cabs charge a flat rate of $52 from JFK to Manhattan (as well as the other way around). Keep in mind that this price doesn’t include extra surcharges (usually a couple of dollars), tolls, and tips, which are customary. They also add an extra $4.50 rush hour surcharge from 4pm to 8pm on weekdays.

Another way to travel from JFK Airport is with a private, door-to-door transfer directly to your accommodation in the city. You can pre-book a transfer for a hassle-free experience, a professional driver will wait for you at the airport and take you to your destination.

Renting a car at JFK Airport

For those of you who would like to reach the city and explore the area on their own, the best option is to rent a car directly at the airport. There are several car rental companies there: Advantage, Alamo, Avis, Budget, Dollar, Enterprise, Hertz, National, Payless and Thrifty. You can find the Car Rental counters on the Arrivals level of every terminal and the cars themselves at the Federal Circle Station (accessible with the AirTrain). A simpler option would be to check the prices and book your rental car online.

Renting a bus at JFK Airport

No, that won’t be a problem. The city buses and taxis operate 24/7 so you will definitely have some options to get to the city.

Can I exchange money at the airport?

Yes, you can. There are ATMs and/or exchange offices to be found on every terminal so it should definitely not be a problem.

I am continuing my journey outside New York City. Are there any direct lines to other destinations?

Does JFK Airport have storage lockers?

Is there a free WiFi service available at JFK Airport?

Can you sleep at JFK Airport?

Yes, there is a hotel inside the airport terminal where you can stay overnight. The hotel is equipped with conference rooms, a gym, swimming pool, lounge, museum and many more.

Can you smoke at JFK Airport?

JFK Airport is completely smoke-free indoors, including e-cigarettes. There are designated smoking areas outside the terminals.

Does JFK Airport have long-term parking?

Where can I find the Baggage Claim at the JFK Airport?

You can find the Baggage Claim on the Arrivals Level of each terminal.