Ever heard of Český Krumlov, one of the most picturesque cities in Europe? Well, this gem hidden in Bohemia’s deep south is a miniature version of Prague and a UNESCO World Heritage Site, showing off with a breathtaking castle on the Vltava River, baroque and Renaissance architecture and countless tourists. It’s a perfect summer getaway for everyone who wants to feel the real Czech atmosphere on the streets or enjoy the splendid views of castle blanketed in snow during winter. Check out what’s not to miss on your visit to Český Krumlov.

Getting there: You can reach the city of Český Krumlov from several cities across Czechia and rest of Europe, e.g. Prague, Brno, Vienna, Budapest, Munich. 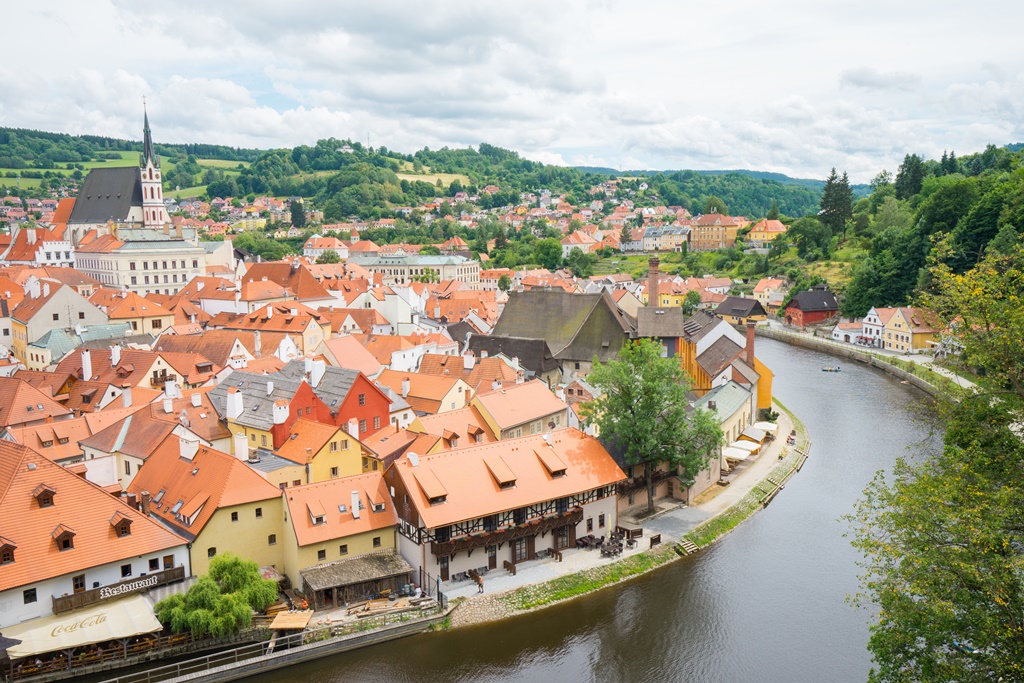 The city’s main landmark is the massive Český Krumlov Castle, so it’s the absolute number one to see. It dominates the old town and offers a fascinating insight into the lives of the aristocratic rulers of Bohemia through the course of time. Although the castle dates back to 1240, the most of it was built in the 17th century, including the splendid Chapel of St. George, the Rosenberg Ballroom, the Renaissance Hall and the majestic Royal Apartments. Another beautiful part of the castle is the Baroque Theater, built in 1682, with still-functioning equipment and props dating from the 18th century. In this UNESCO site, you will get the chance to see an amazing collection of paintings and furnishings. All in all, there are 40 buildings and palaces, five castle courts and a park, so prepare yourself for some walking time.

The next site which dominates the city is the Roman Catholic Church of St. Vitus, which traces its origins back to the 13th century. Apart from the church’s distinctive profile, you’ll notice its tremendously tall roof, equally magnificent when looked upon from the building’s decorated nave. The church is also the burial place of many members of important Bohemian families, from the Rosenbergs to the Schwarzenbergs. Try to visit in the time of one of the church’s classical concerts and you’ll have even more unforgettable experience. 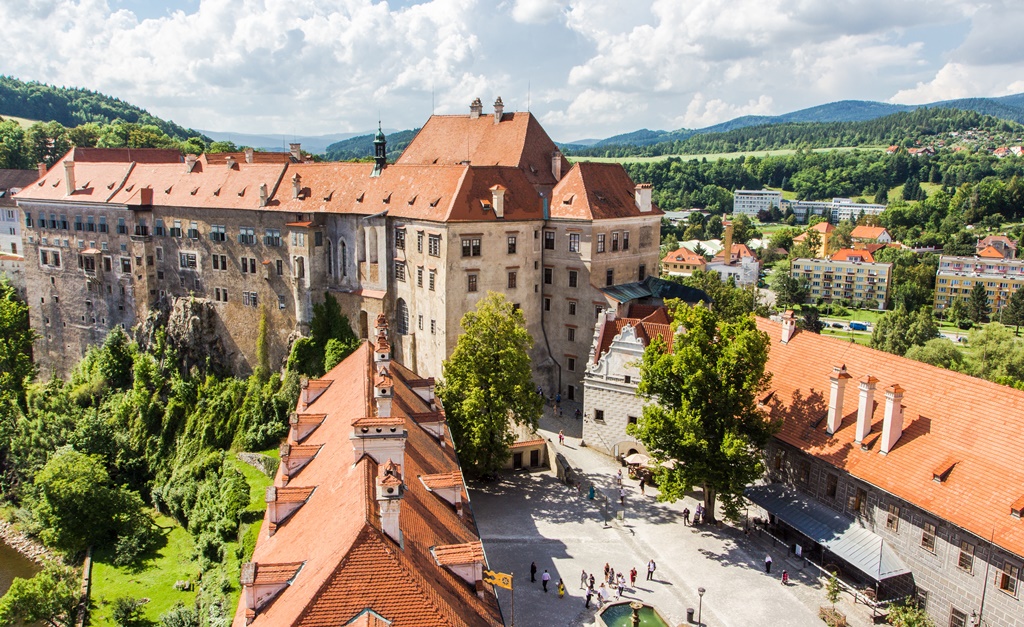 Also, we can’t forget another one of the city’s oldest surviving buildings, the Minorite Monastery, whose traces go as far back as the 14th century. Still in use, this monastery includes the Beguine Convent, a unique set of trusses of Gothic, Baroque and Renaissance origin.

However, other than all these spectacular buildings and other sites we’re about to mention, the highlight of a visit to Český Krumlov is strolling along its old streets and gazing at the splendid artwork everywhere around you, since the city is famous for its very long tradition of frescoes. It is also home to the Egon Schiele Art Centrum, a lovely gallery which contains classical and contemporary 20th-century artwork. The gallery was established in 1993 and today features works by artists like Gustav Klimt, Pablo Picasso, and Salvador Dalí.

If you want to continue your cultural education, there are few more museums worth visiting.

One of them is the Regional Museum, with great exhibits on the history of both the city of Český Krumlov and the region of Bohemia. They include weaponry, furnishings, folk arts and much more. The highlights of the museum are the collection of Gothic sculptures and an enormous ceramic model of the city built in detail in 1:200 scale.

A short walk from the old town, you’ll come across the Marionette Museum, a really interesting attraction, especially for those traveling with children. The museum is housed in the former Church of St. Jost and features numerous displays which give an insight into the evolution of this form of entertainment, from stages and puppets from the 19th century to modern collections from the National Marionette Museum in Prague. The best part of any visit is the chance to catch a performance of a classic opera such as Don Giovanni or The Magic Flute.

Another museum we must mention is the Wax Museum of Český Krumlov, located in a restored Renaissance house, which boasts many wax figures in costumes and situations common in medieval Europe. You can see an alchemist shop, a medieval tavern, the royal court of Emperor Rudolf II, but famous people of the recent history, including rock stars, royalty and movie stars. 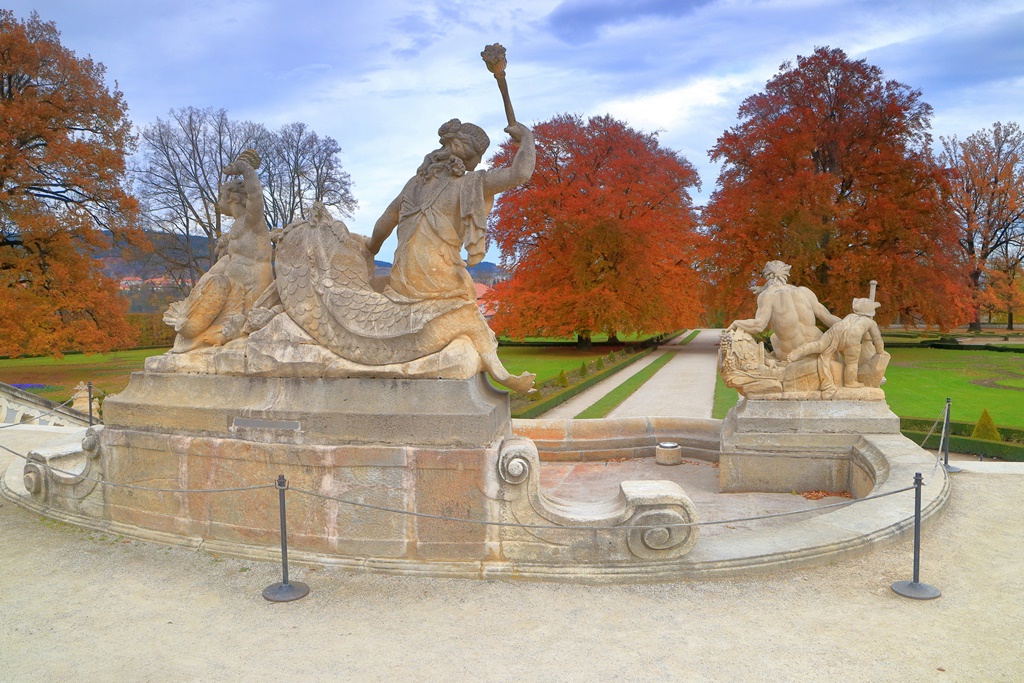 And last, but not least, and certainly not everyone’s cup of tea, the Museum of Torture provides an interesting look at the cruelty used to punish criminals and wrongly accused of throughout the centuries. In the cellars of the old Town Hall, this dark museum houses more than 100 artifacts and instruments of torture, including the chilling witch burning that once shocked Europe.

During your stay in this small Czech paradise, visit the 1,804-meter-high Mount Klet, which is a perfect stop after all that sightseeing in the city core. You can reach the top either on foot by following the well-marked trails or by a fast chairlift. Not far from the top of the mountain is the Klet’ Observatory, while at the summit itself there is Josef’s Tower, an amazing observation tower dating back to 1885 and from which you can see as far as the Alps.

What to eat: As people say, ‘When in Rome, do as the Romans do’, so you should do the same here. You visit would not be complete without trying some local cuisine, so read carefully now: Papa’s Living Restaurant for Italian dishes or Spanish ham and arugula, Le Jardin for a mixture of French and Czech cuisine, Švejk Restaurant if you’re up for some traditional Czech food, Laibon for fans of Indian and Middle Eastern dishes, Restaurant Konvice with probably the best Czech delicacies, and many, many more. The choice is all yours. 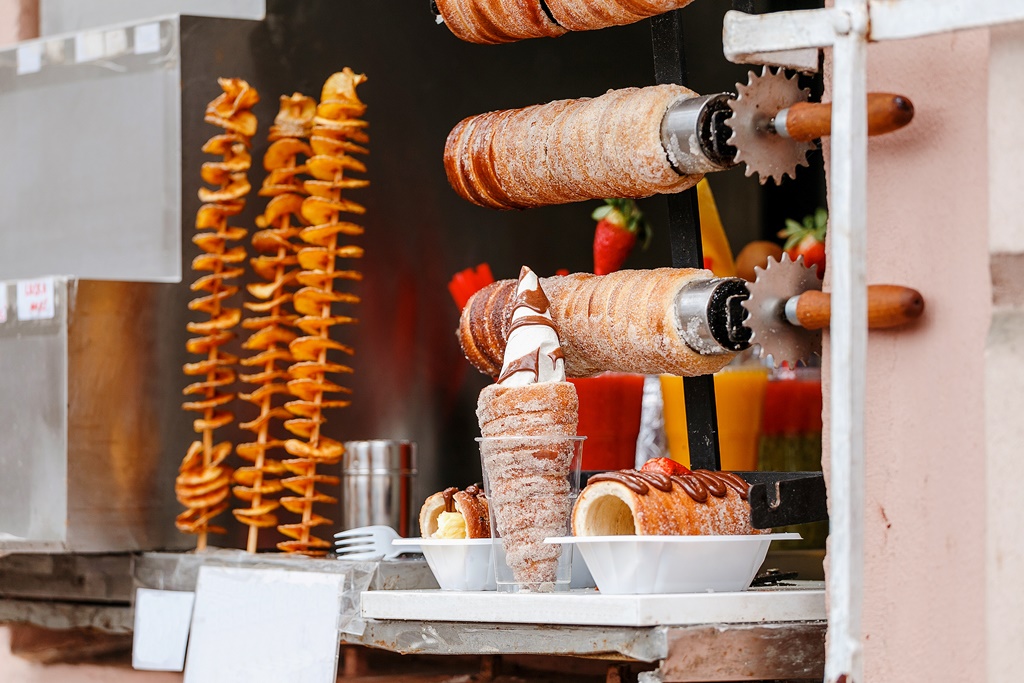