Belgrade is the capital of the Republic of Serbia with a population of 1 250 000. By population it is the fourth largest city in Southeastern Europe, after Istanbul, Athens and Bucharest. Thanks to its favourable traffic position, rich nightlife and cultural and natural heritage, the city attracts a lot of tourists.

Belgrade has a well developed public transport network which is operated by:

Using the public transport within the city will get you much faster to your destination than using a car. Public transport is pretty efficient; there are cca 176 bus lines (27 night lines), 12 tram lines and 8 trolleybus lines. How frequently these lines run depends on the route and the period of the day; the waiting time is between 3 and 30 minutes. Each station, at least those in the centre, has a bus schedule. The schedule can be seen here.

Night lines are a combination of several day lines, they run within the city and the suburban areas. They run every 30-60 minutes from the Republic Square, Slavija or the New Belgrade Municipality. The transport is done only by the private companies.

Mini buses do not stop on all the stops which makes them faster than the regular buses. These do not run during the night, on Sundays or the holidays. Tickets can be purchased from the driver only and they are a bit more expensive than the tickets for other means of public transport.

GSP Beograd and the private bus companies have an integrated ticketing tariff system for passenger transport. Bus Plus contactless cards are used in the entire network of public transport, in all vehicles, including Beovoz (city railway).

There are several types of tickets:

Suburban transport on Belgrade territory, Srijem and Banat, includes more than 300 lines and 2500 dailiy departures and it is operated by SP Lasta bus company. Suburban buses depart from the Lasta bus station (right next to the main bus station). The address is Železnička 2, here you can check it on the map. 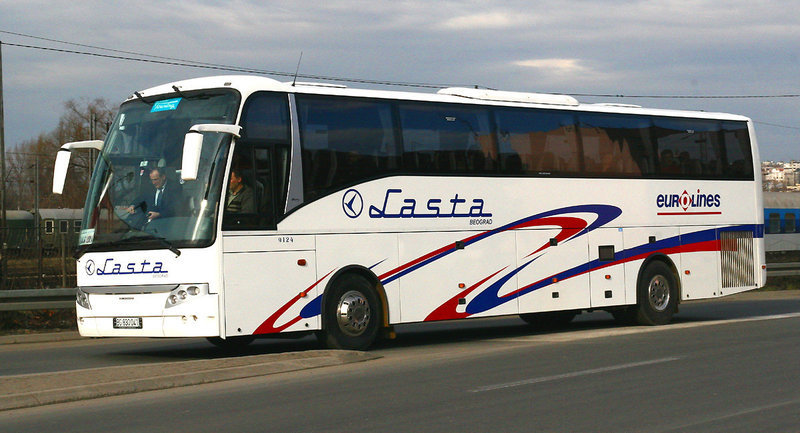 Bus lines to all the bigger cities in Serbia depart from the main bus station – Beogradska autobuska stanica BAS. During tourist season (summer and winter) additional lines are introduced.

Belgrade is situated at the crossroads of major European corridors, nr. 10 (Zagreb-Belgrade-Nis) and nr. 7 (Budapest-Belgrade-Solun).

International transport to Western Europe is mostly directed towards Germany and Austria from where you can continue to other destinations.

If you travel from Croatia, on Getbybus.com you can find the following lines from/to Belgrade:

If you travel from Europe, on Getbybus.com you can find the following lines from/to Belgrade:

Belgrade Airport, Nikola Tesla, is situated in the vicinity of Surcin, a small place 18 km from the airport. The address is Nikola Tesla bb and here you can see it on the map.

Bus line nr. 1 from/to the airport operates every 20 minutes and it goes to Slavija Square (centre); the ride lasts app. 30 minutes. The bus stops also at the railway station and Novi Beograd (fountain). Tickets can be purchased from the driver. The bus station by the airport can be found 15 metres on the left from the airport exit.

Public bus nr. 72 also connects the airport and the city. From the airport it departs every 30 minutes and goes to Zeleni Venac (green market in the centre). Depending on the traffic, the ride lasts app. 40 minutes. Although this is the cheapest travel option it is not the simplest one if you are in Belgrade for the first time and do not have a city map with you.

Open tourist buses are available from April till October, every day except for Mondays. They depart from Nikole Pasica Square at 11:00 and 13:00 and the ride lasts app. 70 minutes. Tickets can be purchased at the Tourist Office and the BS-Tours offices.

Hop-on hop off tours are available every day from May till October. You can board these buses at any of the stops within 30 minutes. Tickets are valid for 24 or 48 hours from boarding the bus for the first time. The first departure is at 09:30 and the last one at 18:00 from Savsko pristaniste. More info can be found here.

It is also possible to go sightseeing by minibuses. A tour lasts for 2 hours and the minibuses depart on working days at 10:50 in front of Balkan Hotel. Tickets can be purchased at Glob Metropoliten Tours, 26 Dositejeva street.

Belgrade grande tour every day at 13:00 in front of Sveti Savo church from May till October. Here you can find more info.