We all know that Madrid and Barcelona are the most popular destinations in Spain but there is so much more to see than these two Spanish giants. Narrow cobbled streets, magnificent architecture, tasty traditional dishes and cheerful people – all of that is what makes these towns so special and worthy of visiting. Check out our top 10 pick of small towns in Spain!

Besalú is a typical medieval Spanish town which remained intact over the years. This fortified town in the province of Girona is full of narrow cobbled streets so it’s advisable to wear proper footwear. The street from the bridge will take you to the town square Plaça Major, which used to be the centre of  Besalú few centuries ago.The most significant monument in Besalú is its medieval bridge which looks like it came out from some kind of fairytale about brave knights and on top of that, it gets illuminated in the evening. Also, don’t miss to visit Museum of Miniatures and Microminiatures which has an exhibition of scenes from the 19th century. Some of the miniatures are so detailed that you need a microscope to see them. 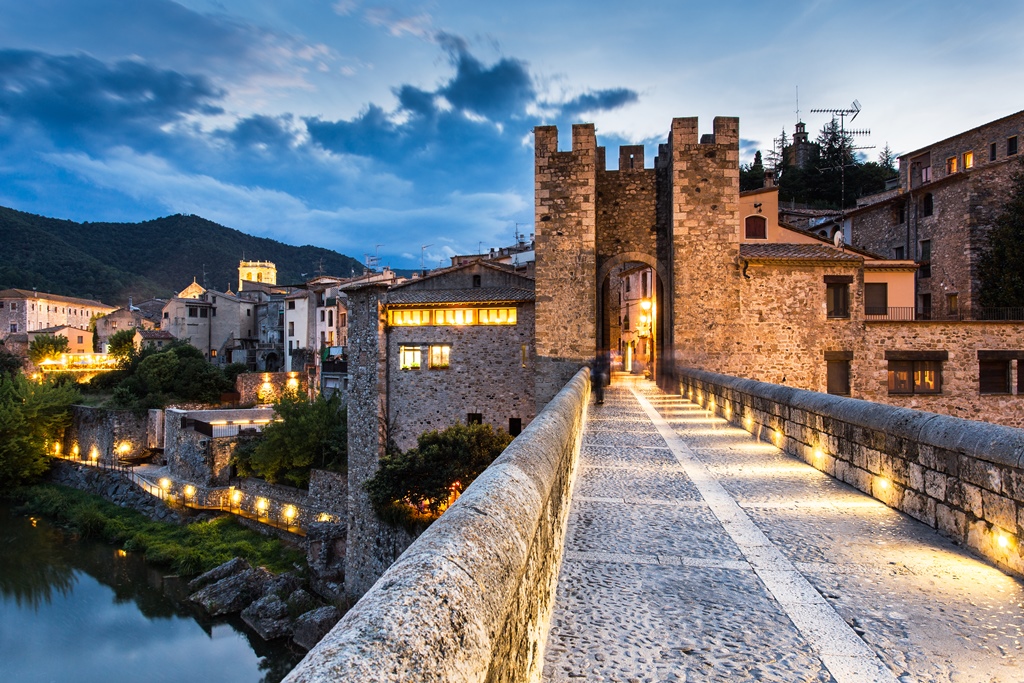 You thought only Barcelona had famous works of Antoni Gaudí? Well, you were wrong because the town of Comillas will amaze you with its El Capricho building. The building is characterized by its unique style which is similar to a Persian minaret. Visit marvelous Sobrellano Palace, situated next to El Capricho. The palace is currently under the property of Government of Cantabria and it was turned into a museum. To enter the museum, you will have to pay only 3€. Only 12 kilometres from Comillas is located Oyambre Natural Park in small village of San Vicente de la Barquera. The site offers numerous surfing schools where you can learn how to ride waves. 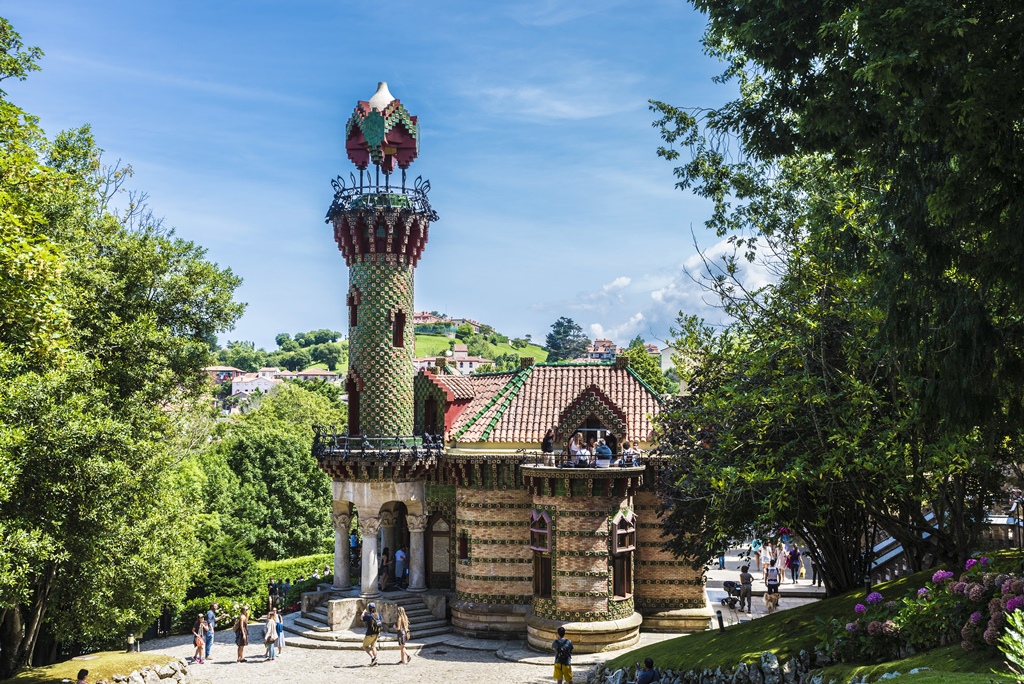 Although it is not a big city (counts around 50 000 residents), Cuenca is actually the capital of the homonymous province of Spanish autonomous community Castilla-La Mancha. This town is particular because it was built on top of steep rocks at an altitude of 956m, and on top of that (no pun intended) the town was listed as UNESCO World Heritage due to well preserved cultural infrastructure. The main monument in Cuenca is Cathedral of Our Lady of Grace, also known as the first gothic cathedral in Spain. The central square is called Plaza Mayor where you will see baroque Town Hall. Probably the most famous part of Cuenca are the so-called las casas colgadas or the “hanging houses”, the example of the traditional Cuenca houses built on the rocks. Today some of them house restaurants and the Museum of Abstract Art. 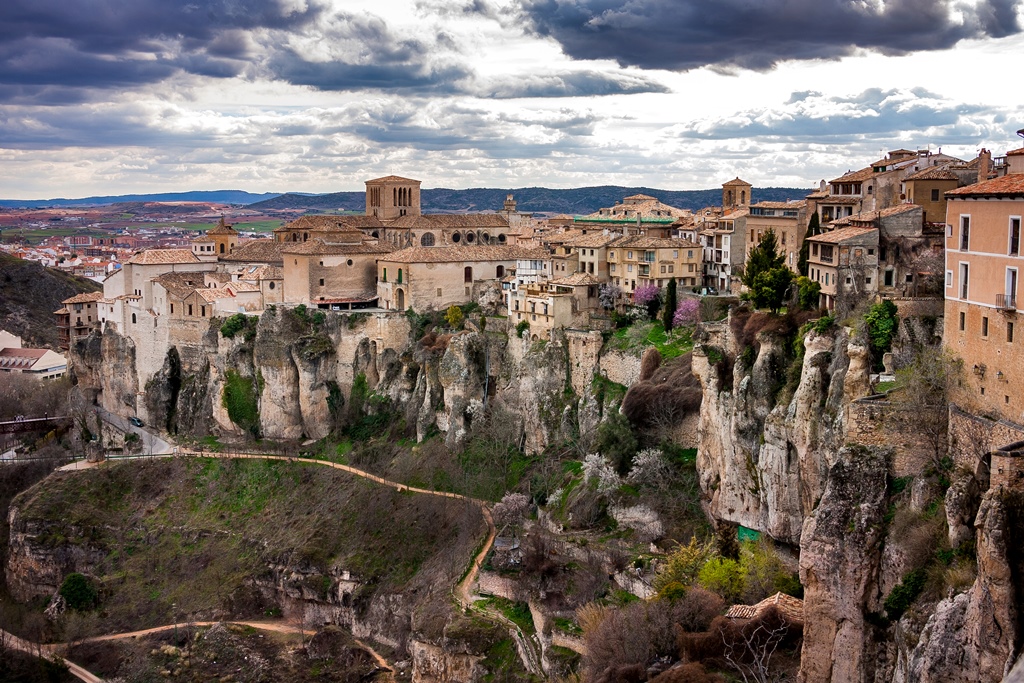 This small town of merely 3000 residents has a palace which could stand side by side to some of the world-known palaces. We’re talking about the Palace of the Kings of Navarre of Olite which is actually a fortification and it consists of three main parts: the Old Palace, the New Palace and the church of Santa María la Real. The fairytale-like design of the palace is what makes it so special – it’s because the palace wasn’t built all at once, but it is actually a result of expansions throughout the centuries. The mild Mediterranean climate has also made Olite the capital of Spanish wine, so make sure you sign up for a wine tasting tour and give your palates an unforgettable experience! 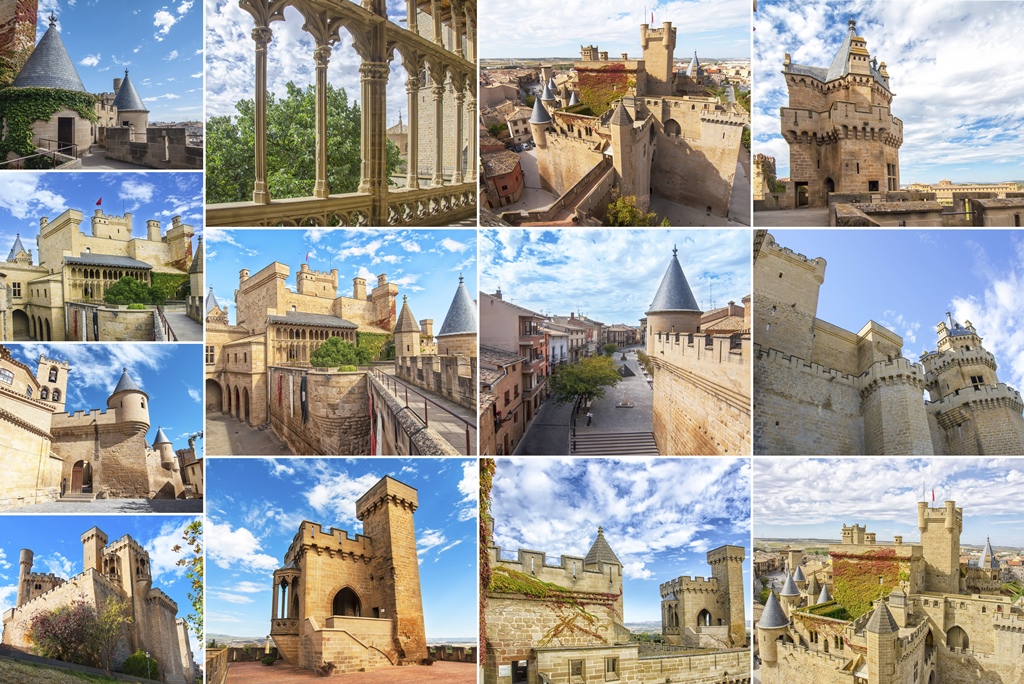 We might as well call it “the twin sister” of Cuenca because the town of Ronda is also built on rocks, above the El Tajo canyon. The town is famous for its three bridges: Puente Romano, Puente Viejo and Puente Nuevo which crosses the canyon. You thought bulls were popular only in Pamplona? Well, in Ronda you will find  the oldest bullfight arena in Spain which can host up 5000 spectators and you can also visit the museum of Plaza de Toros for 7€ (8.50€ with audio guide). Not many people know that Ronda inspired Ernest Hemingway’s novel For Whom the Bell Tolls – allegedly, the description of the execution of Fascists who were thrown off a cliff is said to be modelled on Ronda and El Tajo canyon. 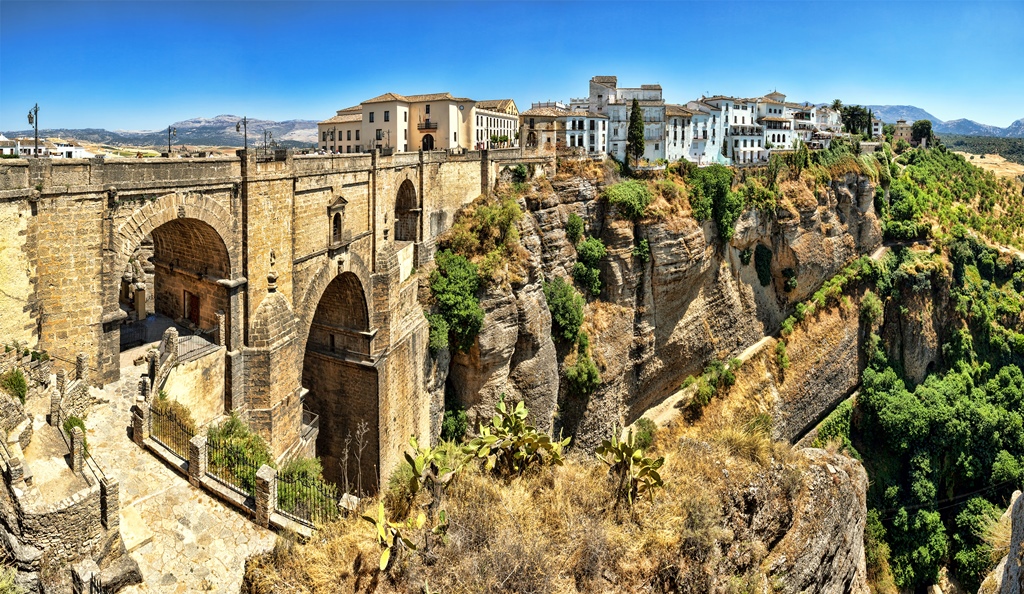 Salamanca is the perfect example of how the modern meets the old. Although it is not really a “small town” in terms of population, it definitely deserves to be visited. The most iconic building in Salamanca is its university which was founded in the 13th century which makes it the oldest university in Spain (and third oldest in world!). Even the famous Spanish writer Miguel de Cervantes himself was once the student at this university! Visit the impressive Old and New Cathedral which are one of Spain’s most recognizable gothic buildings. Visitors are allowed to climb the towers which are perfect for having a spectacular panoramic view. 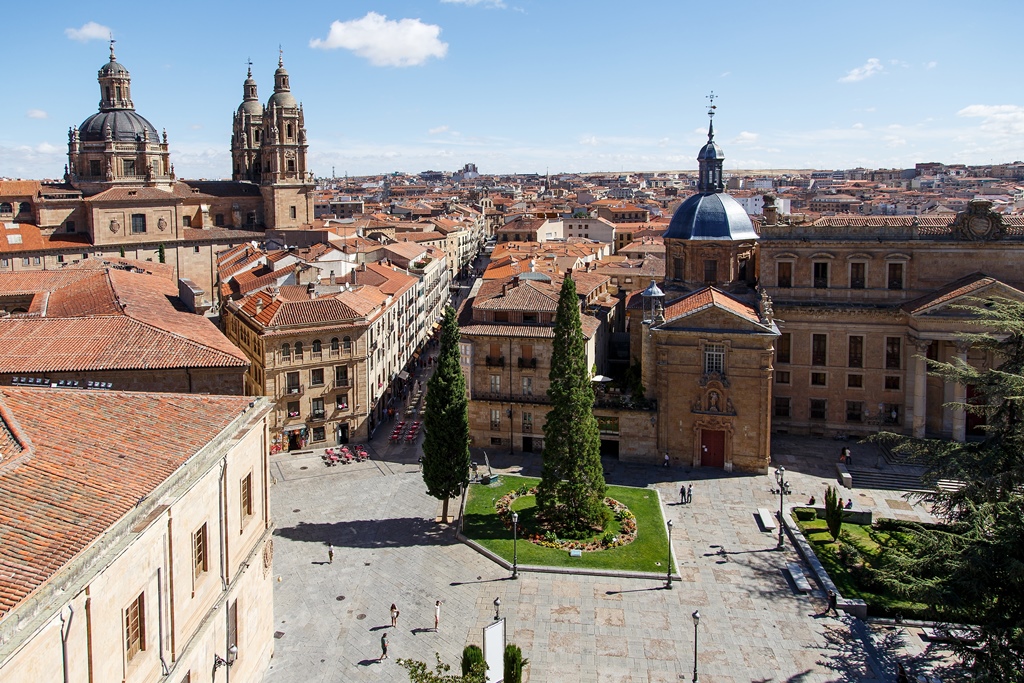 Setenil is probably the most unusual town on this list. We don’t exaggerate when we say that Setenil is a town underneath a rock. That’s right – the whole town with population of 3000 residents lives under a rock. Many say that people living here deliberately decided to build their homes inside of a rock because provides shade during hot summer days and keeps heat in the winter. This little town evolved from fortified Moorish settlement and it got its name after wineries which were once built inside these rocks (bodega means wine cellar in Spanish). Today the residents of Setenil mostly focus on producing olive oil, almonds and wine. 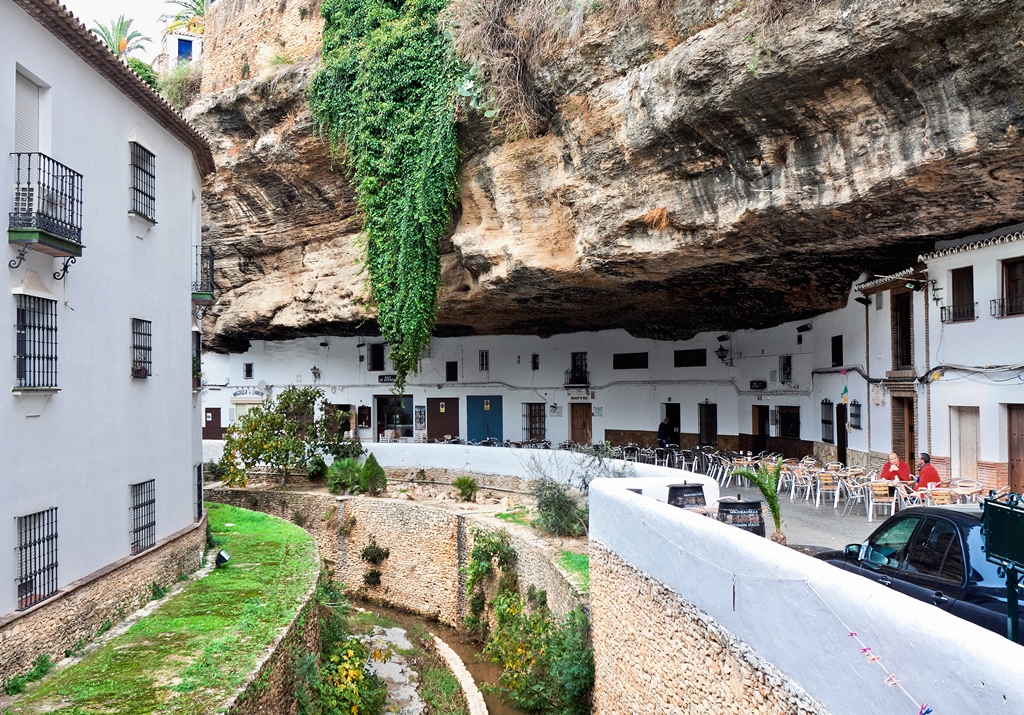 Setenil de las Bodegas, the town “under a rock”

To get the real picture of Frigiliana, we could compare it to Santorini in Greece. Whitewashed houses and cobbled narrow streets on the hill which overlook sunny Costa de Sol. An interesting fact is that Frigiliana was several times named as the most beautiful village in Spain due to its Morisco-Mudéjar district famous for its distinctive architectural style. The most popular event held in Frigiliana is the so-called Festival 3 Culturas with numerous live stage performances and  street performers throughout the village. Particular is “the route of tapas” race and the rules are simple: for only 1.50€  a piece you can try different kinds of tapas and drinks and restaurants prepare special menus with Jewish, Arab or Christian food. 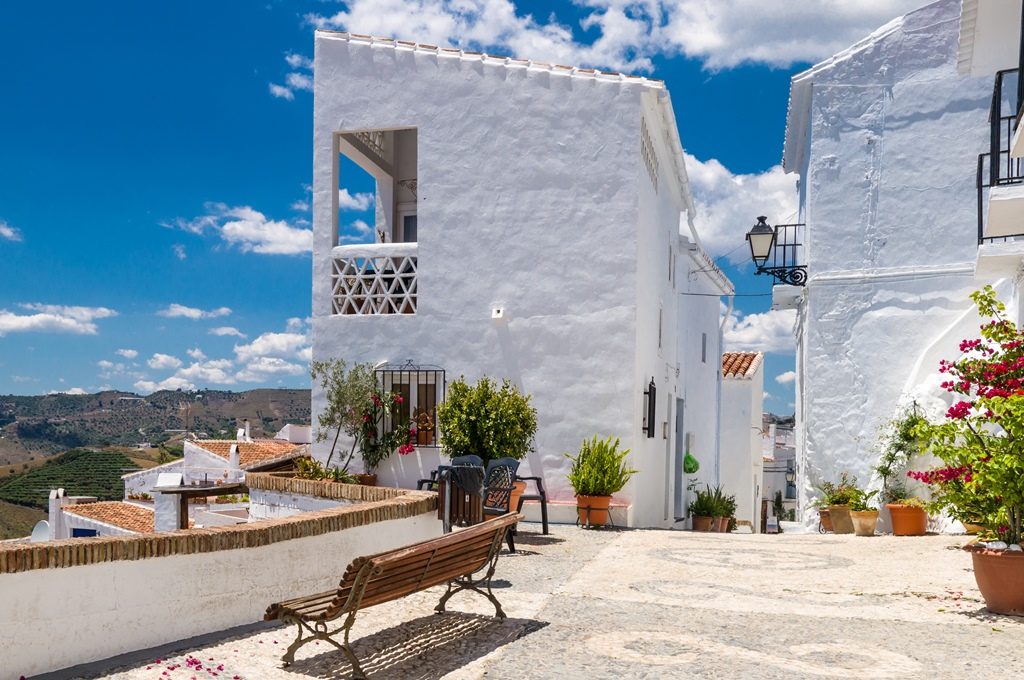 You can travel back to Roman Empire because Mérida has without any doubt one of the best-preserved Roman ruins. The capital of Extremadura is home to one of 45 UNESCO sites in Spain and the most iconic is the Puente Romano – the longest Roman bridge ever built nowadays used only by pedestrians. The Roman Theatre was built in 16 BC and it could accommodate almost 6000 spectators which was at that time equal to some of the biggest football stadiums today. All the ruins in Mérida are close one to another so you can do the tour by foot. 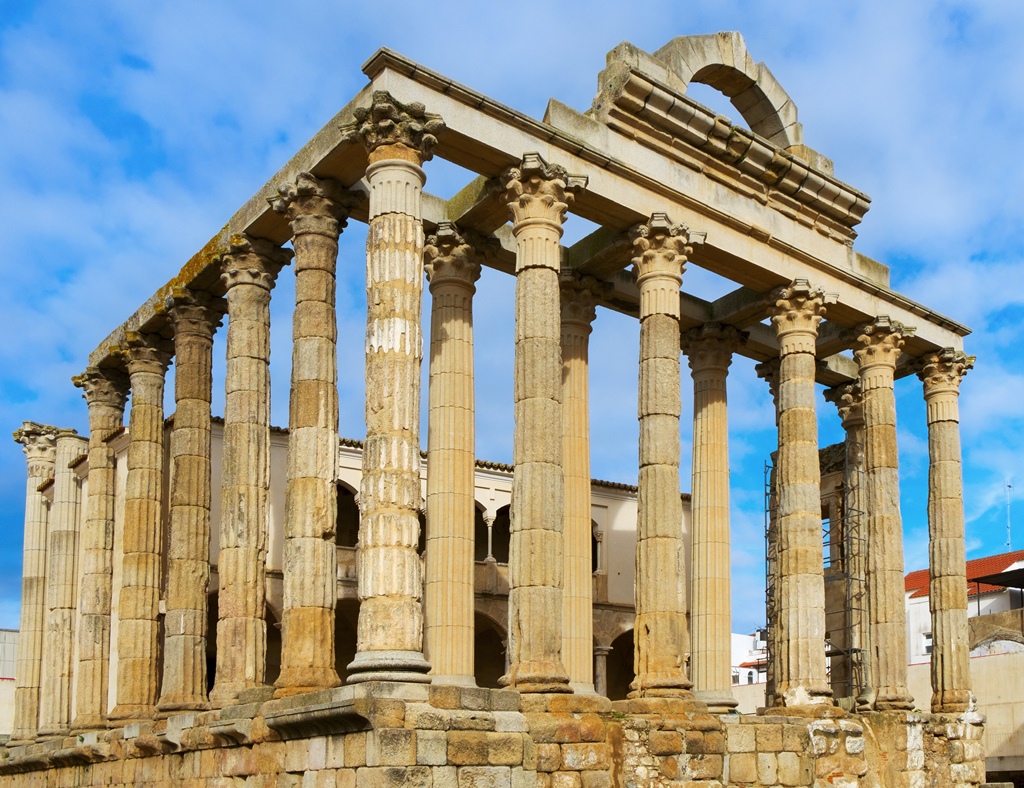 The remains of the ancient roman Temple of Diana in Merida

Known as the “Gibraltar of Valencia”, Peñíscola was for a long time just a basic fisherman village but with the passage of time and ever growing tourism, this town “in the sea” is truly a heaven on Earth. Visit the Castle of Pope Luna which stands on top of the Peniscola hill and get a perfect 360° view. Peniscola is a must-visit for the fans of worldwide famous TV show Game of Thrones because some of the famous scenes from Meereen were shot here. 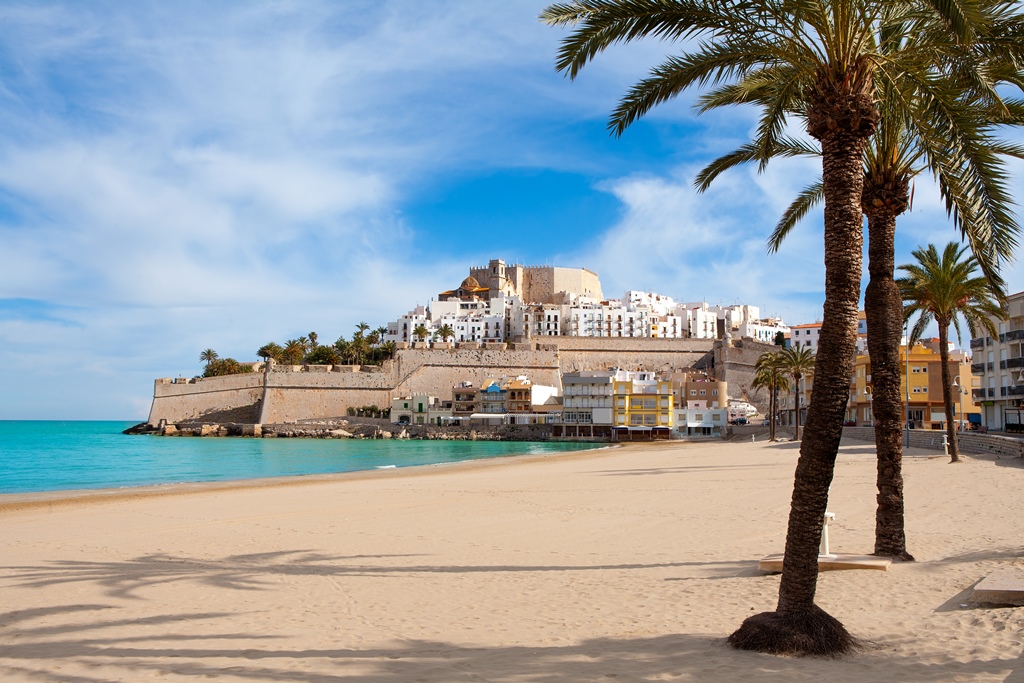 Peniscola, “the City in the Sea”