Germany has a reputation of being cold, imposing and quite harsh. Although that may be true for some of the country’s larger cities, the situation in small towns is pretty different. Keep in mind that, with all the castles, alpine views and other fairytale-like features, winter is by far the best time to have a vacation in the country that created the world-famous Oktoberfest. Check out our list of 10 best small towns in Germany to feel the real German culture, meet the traditional costumes and taste the typical dishes everyone’s been talking about!

Once in Germany, this UNESCO World Heritage Site is a must-visit city. The capital of the Hanseatic League has been the ‘City of the Seven Spires’ for centuries, towers of which decorate the Old Town even after a devastating bombing raid in the war times. Lübeck was founded in the 12th century and prospered until the 16th century as the major trading centre for northern Europe and has remained one ever since. The city is proud of its patrician residences, public monuments and attractions, salt storehouses and churches, among which are Gothic Lutheran Lübeck Cathedral and St. Mary’s Church, all of which have remained unaltered during the course of time. Beautiful medieval architecture, rich culture and delicious marzipan treats (especially in Café Niederegger which serves 100% pure marzipan) including marzipan-infused treats, such as tarts, cakes, beverages, liqueur and chocolates. 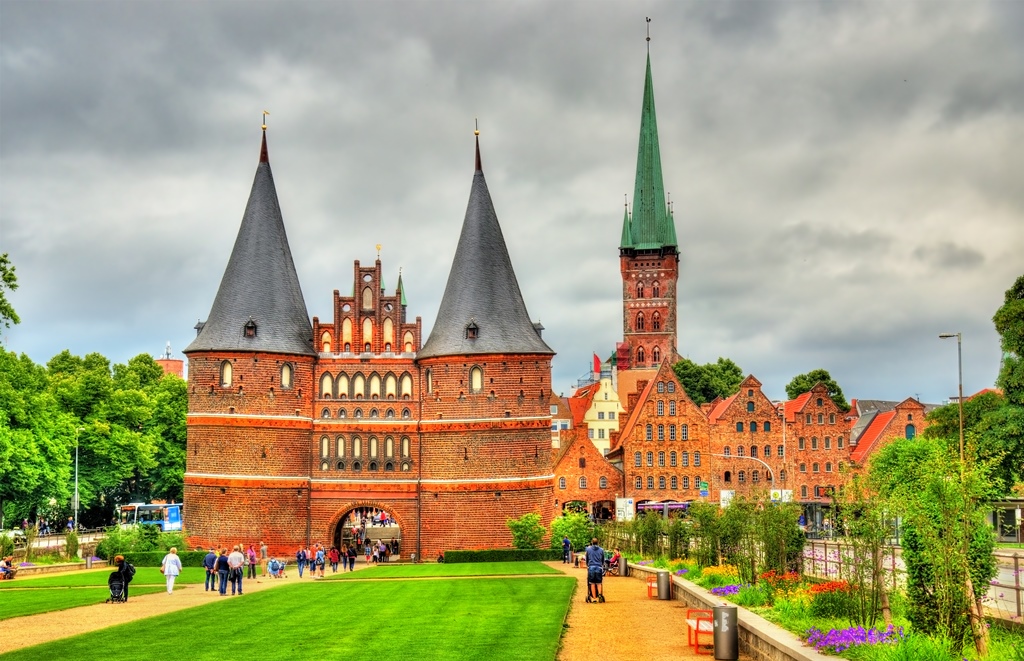 German vacationers prefer their islands when it comes to a short break from the hustle and bustle of big cities. Lindau is located on Lake Constance, known as Bodensee in German and as Europe’s third biggest lake. The city borders two alpine countries, Austria and Switzerland and includes few islands with splendid beaches, medieval villages, castles and wine. Lindau is also proud of its fantastic harbour, guarded by a Bavarian lion and a lighthouse. The city’s Old Town area is full of medieval buildings, and many people take a guided boat tour to see the island from a different perspective and enjoy the impressive panorama. Lindau maintains a long tradition of maritime activities both in the harbour and on the promenade, regarded as one of the most attractive there. The city hosts many interesting sites as well, but we must highlight St.Peter’s Church (Peterskirche), the oldest church in Lindau, and Haus zum Cavazzen, considered to be the most beautiful house in the city.

The small town of Cochem is one of the loveliest landscapes in Germany, nestled in the high vine-covered slopes of the Moselle Valley, which goes through two hiking areas, the Eifel and Hunsrück ranges, with a trail along the valley going through vineyards and past Medieval castles to Trier and Koblenz. The city’s most popular landmark is the Reichsburg Castle, over 1 000 years old standing on a hill overlooking the town. The castle is open to the public by guided tours, each lasting about 60 minutes. Center of Cochem’s happenings is at the Market Square, where you’ll find the charming St. Martin fountain and the baroque Rathaus from 1739. However, the best way to meet the town is by taking a tour with the Mosel-Wein-Express, a small street train full of information about the town. The ride takes 30 minutes and takes you through the Old Town, past the city gate Enderttor, to a viewpoint overlooking the city and the castle, along bunch of vineyards and so much more. It costs 4€ for adults and 2€ for children. 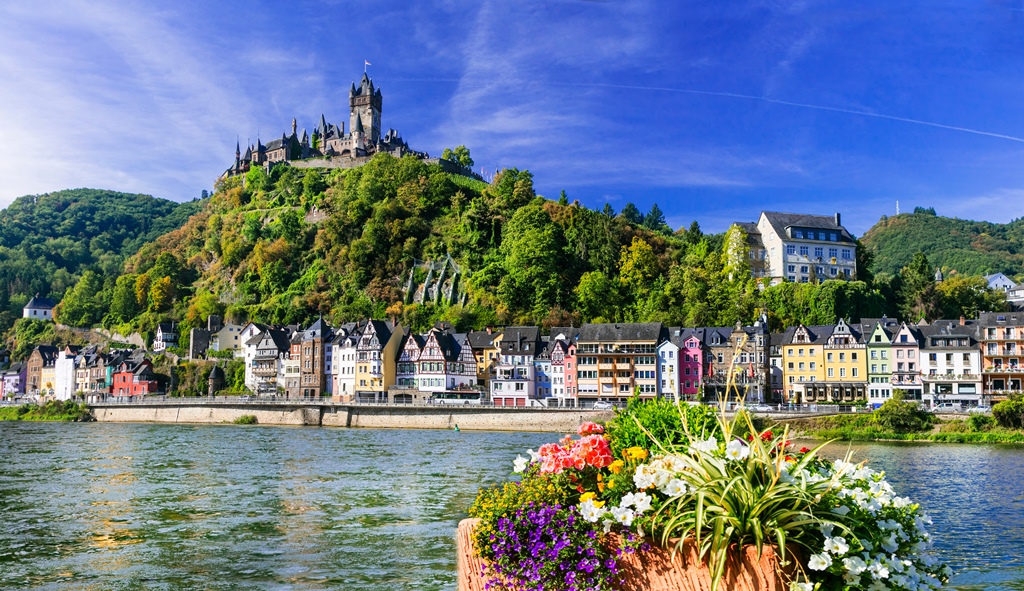 If you have ever wondered where the church from covers of most German brochures is, now you know it. St.Sebastian’s Church surrounded by a burbling mountain stream with an impressive view of the Alps in the background is a postcard picture describing Germany’s landscape in just one scene. However, this tiny church is not all there is to see in Ramsau. The nearby Hintersee Lake is a perfect place to spend some time in nature, whether it’s boating, strolling or something else. Its crystal clear waters and breathtaking surrounding are more than enough to realize why the lake is so popular among various artists. This small town has another treat, the Herbstfest (fall festival), when cows are brought down from the summer pastures to the lower areas, and get decorated and decked out with cowbells while their shepherds wear traditional Bavarian clothes. When you add Bavarian beer and sausages to that, it sounds fun, doesn’t it?

Perched on the banks of the River Elbe, the 1000-year-old city of Meissen is indeed an incredibly enjoyable sight. The mighty Albrechtsburg Castle, built in the 15th century and considered to be Germany’s oldest castle, overlooks a picturesque Old Town, vineyards rolling one after another for as long as your eyes can see and a beautiful river valley. The splendid Gothic castle is accessible by foot or by the Panoramaaufzug Burgberg. Another thing the city has been famous for is the highest-quality porcelain, manufactured here before anywhere else in Europe and still pretty much in business after more than 300 years of production. If you’re interested, visit the Neoclassical Museum where you can observe amazing collection of porcelain items made over the course of time. Not to forget, the Meissen Cathedral is another Gothic masterpiece, definitely worth of your time, at least so you can say you’ve stepped foot in one of Europe’s smallest cathedrals. 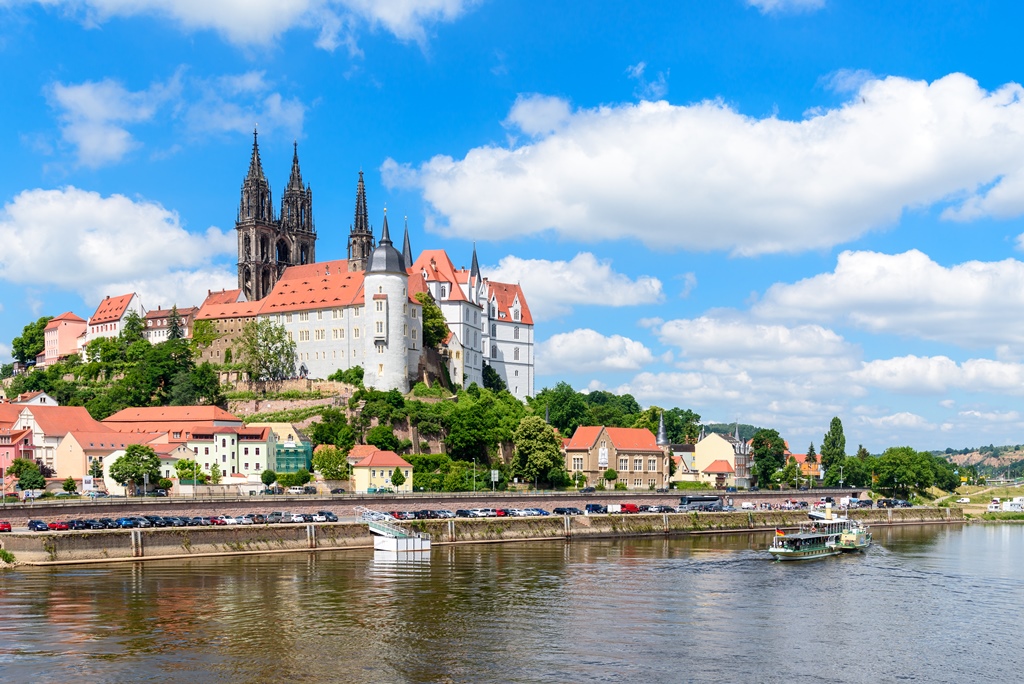 Wine lovers, listen up! We are presenting you one of Germany’s most scenic wine regions which offers beautiful hikes through the mountains and breathtaking views over the Rhine river valley. And that’s not all. Let’s start with one of the oldest castles in the region, the historic Brömserburg Castle, which dates back to more than a thousand years and houses a fantastic Rheingau Wine Museum, originally built as a castle for the archbishops of Mainz and provided home to many dynasties until its reconstruction in 1941 when it was turned into a museum. There are more than 2000 exhibits which offer you an insight into the wine production in different periods, from antique to modern times. Another must-see is the Abbey of St. Hildegard on a hill above the city, a monastery builts at the beginning of the 20th century in a Romanesque style, displaying architectural works and beautiful frescoes. After these tours, take a stroll along the Drosselgasse, a charming cobbled street filled with historic buildings, restaurants, bars and shops, ideal for a coffee or a meal.

The city of Goslar is the heart of the Harz Mountain ranges in the country. Dating back for more than a 1 000 years, Goslar maintains a long, rich tradition of mining, the chronology of which you can see in the Rammelsberg Mining Museum. The city itself is a UNESCO World Heritage Site full of great activities and sights for visitors. One of the city’s most recognizable landmarks is the Imperial Palace, built in the 11th century, is open to public by tours during which you can see the amazing artwork in the upper floors. Despite being a small German town many people don’t know of, Goslar is home to many lovely churches, such as Frankenberger Kirche built in the 13th century in Gothic, Baroque and Romanesque style, and Gustav Adolf Stave Church, a a Nordic-style stave church really standing out in Lower Saxony. We must mention the Zwinger Tower as well, a remnant of the ancient fortifications of the city, used to control the approaching enemies and to prevent attacks on the city. The site today is a restaurant, a guest house and a small museum with a collection of medieval weapons. 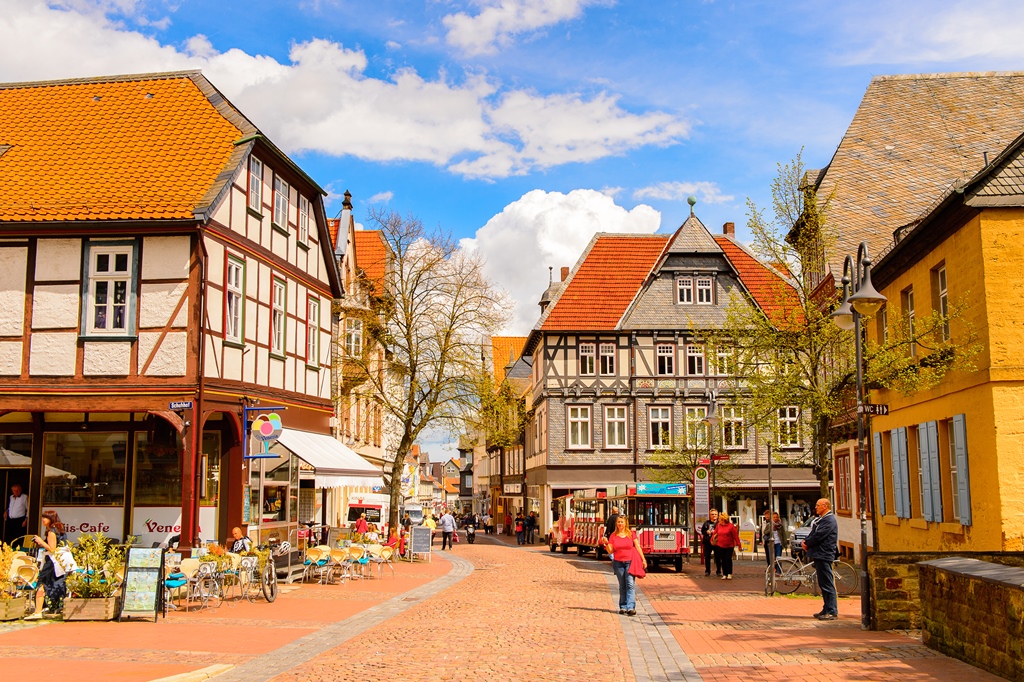 Another UNESCO World Heritage Site with 70 000 inhabitants welcomes you with a line of half-timbered houses, mainly constructed in the middle ages. This city center used to be a fishermen’s village and many called it the Little Venice in Franconian Rome. If you want to make a visit to this town more memorable, come during the traditional Bamberg Beer Festival called ‘Sandkerwa’, during which Bamberg serves as the background in portraying the dispute of local fishers. Another landmark of the city is the Old Town Hall which has placed itself right in the middle of the Regnitz River. The three-dimensional baroque building is highlighting the old Rococo Hall and the Ludwig Collection, displaying over 300 artistic figurines, animal-shaped serving dishes and other porcelain items from the 18th century. For those of you who are interested in discovering the gastronomic side of the city, we recommend you the Bamberg Zwiebel (onion) in a restaurant. Grilled onions stuffed with mincemeat, sounds delicious?

Rothenburg ob der Tauber is one of the best-preserved medieval towns in Europe and considered to be one of Germany’s most attractive. Situated on the steep banks of the Tauber River, the city’s walls and towers don’t differ much from how they used to look in the 16th century, while many of the buildings inside the walls date even further back. Some of them are the 13th-century Town Hall known as Rathaus in German, the 14th-century Council Tavern and few charming churches. The main attraction of the city is the Old Town, so make sure to take a stroll to see the characteristic half-timbered houses rolling along the narrow stone-paved streets. The city’s most picturesque spot, without any doubt, is Plönlein (literally translated as Little Square). It’s just an intersection, with a lovely building dividing the two streets, one heading up to the Siebers Tower, while the other one goes down towards the Kobolzeller Tower (both from the early 13th century). 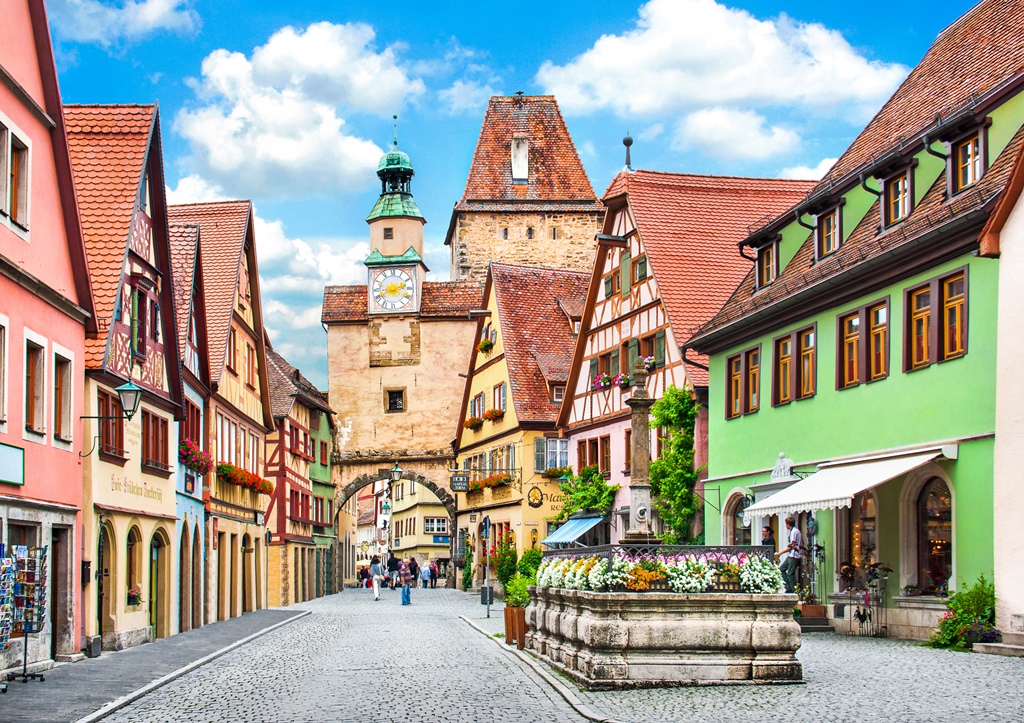 Last, but not least, Trier, or as some know it the Rome of the north, is one of Germany’s oldest cities and can say to be a proud home to impressive eight UNESCO World Heritage Sites! The city is a former Roman metropolis, which is why the large number of Roman monuments is still preserved and can (and must) be visited. Some of them are the majestic Porta Nigra gate, Constantine’s throne room, the Roman bridge, an amphitheatre and imperial bathhouses which are scattered across the town. That’s still not all! Trier is also home to the Germany’s oldest Gothic church, the 13th-century Church of Our Lady (Liebfrauenkirche), which is definitely worth visiting. This small, yet so rich town centers around Hauptmarkt, the largest square, surrounded by townhouses dating back to Renaissance, Baroque and Classical eras. While you’re there, make sure to see the Medieval Crime Museum, the Castle Gardens and St. Jacob’s Church as well. Trier is indeed a cherry on top of our list!